This was a very nice and quiet part.

Mrs. Hithersay sen., with her daughter lived in one house,

In Anchor Row, Martha Hithersay, daughter of John Orchard and Elizabeth (nee Woolley) and widow of framework knitter Benjamin Hithersay, lived with two daughters. They were….

unmarried Mary who appears to have lived all her life with her mother and died at Anchor Row in March 1876, aged 50, ‘after 23 years painful affliction’. (Only on the 1871 census is she recorded as ‘invalid’).

and her elder sister Martha who had married stocking maker John Turner Daykin, the illegitimate son of Mary, in 1840.
Martha Daykin was widowed shortly after the birth of their son William in 1841.

Martha Hithersay died in 1881, aged 93, at the home of her grandson William Daykin and his family at 22 Belper Street.

Martha Daykin went on to live with her nephew James Hithersay, grocer, in Nottingham Road.
She died at 19 Nottingham Road (the Hithersay home) in 1900, aged 80 and was buried in Stanton Road cemetery.

Mrs. Sudbury and her daughter in another,

Born in 1801 Alfred Sudbury was the youngest son of William and Sarah (nee Thompson) and the brother of Thomas of High Street. He lived unmarried in Anchor Row as a lace manufacturer.

Living with him, as housekeeper, was his unmarried elder sister Hannah and her daughter Matilda Potter Sudbury who later married Solomon Beardsley, baker of Bath Street.

Alfred died in March 1864, having returned to his Anchor Row home, feeling ‘unwell’ after a time working in his garden.

Adeline may be recalling families in this general area.
We have just noted a Carrier presence in High Street. No census shows them living in Anchor Row.

The Turtons were the family of tailor Samuel, the son of John and Frances (nee Trueman).

His first wife Frances (nee Pollard) was the eldest child of Bath Street framework knitter Samuel and Hannah (nee Knighton) and died in January 1838, less than three years after her marriage and having given birth to sons James and George. She was aged 26.

Almost three years later Samuel Turton married his second wife Ann Fox, daughter of framework knitter Joseph and Hannah (nee Paling). Ann had a daughter, Lydia, before her marriage, but the child had died at one year old, in May 1840.

After the marriage at least six children followed, all of them born while the family was living at Pimlico and it was in the late 1850’s that they moved to their Anchor Row home.

After Ann died in April 1866, Samuel continued to live at Anchor Row for a time until moving into East Street and then moved back into Pimlico in the mid-1880’s. He died there in August 1889, living with his greengrocer son Edwin (alias Edward) and family.

They too lived in the East Street/ High Street area. 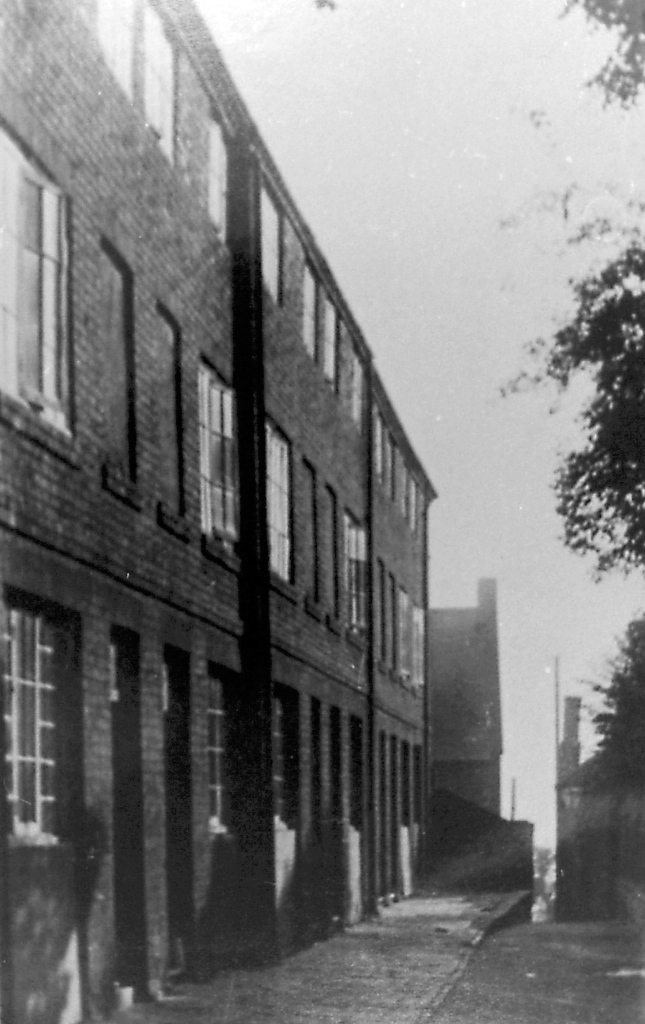 Let’s move on, about 50 years to the sunset of Victorian Ilkeston, and take a snapshot of Anchor Row in 1901; who do we discover there ?

At the far end of the Row, we find Thomas Winfield, his wife Elizabeth (nee Fern) and young son Cyril, aged 2. Thomas was the manager of the Liberal Club, just round the corner … was this house owned by the Club ? … perhaps Thomas was able to walk out his back door and amble a few yards to open up the rear of the Club when necessary ?

Next door is lace warp hand Allen Spencer, married but no longer living with his wife Ellen (nee Medwell) and four children … did they part ? Ellen went into domestic service and then into the Union Workhouse in Bulwell. Allen’s widowed mother, Ann (nee Chadwick) owned the house in Anchor Row after her husband Amos died in 1893. But in 1901 she was ‘visiting’ her daughter Agnes Emma, —  now the wife of James Bostock — in Hobsons’s Drive. Was she caring for her daughter, or more likely was her daughter caring for her ? Ann died in May 1902, still at her daughter’s house.

On to the next home where lives Eunice Mills, a long-term resident and now a widow, husband Thomas having died in 1882. With her is her son Fred, another lace warp hand.

Eunice’s neighbours were William Kennely and his wife Alice (nee Bennett), both of them on their second marriage. With them was Mary Jane, William’s daughter from his first marriage.

And then other long-term residents — the Meer family of grocer’s assistant Benjamin and Emma (nee Daykin), with their six children.

Spinster Maria Allcock occupied the next house after living many years with her sisters in Bath Street … she had only two more years to live.

Then an elderly widow, Sarah Tilson (nee Turton) … husband Thomas Tilson had died in 1875. .. he was Sarah’s second spouse, the first being Robert White, coal miner of Shipley, who died in 1862. With Sarah is her illegitimate son Alexander Turton, born in 1854, now a Corporation labourer.

Finally Joseph Clower and wife Maria (nee Edwards) who had married in 1867 and remained without children.

A small community then, mainly of older residents and small households … of course there were exceptions.

We could move on in time to 1911, just after the end of King Edward VII’s reign, and who do we find in Anchor Row now ?

At the far end of the Row is now Hanford Leivers Marson, the steward of the Liberal Club, who had just married Maude Bircumshaw in 1910. …. her parents, Isaac and Elizabeth (nee Phillips) had both lived in the Cotmanhay/Marlpool area but had ’emigrated’ to Eastwood in Nottinghamshire, where Maude was born. She was the stewardess of the same club.

Next door was another newly married couple and their daughter … Alfred Fox and his wife of two years, Lily(nee Harrison), and daughter Mary. Alfred was a fettler at ‘an iron foundry’.

Then the relatively long-term resident, Fred Mills, a single Ilkeston lad who worked as a lace hand. His mother Eunice, who had been living with him in the row, had died in 1909, aged 80.

His neighbours were William and Alice Kennerley who on the census form, confessed to being married for 19 years and having no children. William’s daughter by his first marriage, Mary Jane, had married Henry Hall, a worker at Stanton Ironworks, in 1909 and had moved away to Hallam Fields.

Then we find the continuing presence of lace worker Benjamin Meer, his wife Emma (nee Daykin, and their now nine surviving ‘children’, ranging in age from 23 years to four months …. and still in their four rooms !!
In fact the youngest child in the list, Sidney Knighton Meer, is not their son but the son of their 20-year-old daughter, Sarah Elizabeth. Never trust a census form !!! ….. a few years later Sarah Elizabeth married George Knighton alias Froggatt who was the illegitimate child of Eliza Froggatt who married Joseph Daniel Meakin alias Knighton who was the illegitimate son of Emma Meakin.

And then there was coal miner Alfred Holmes with his wife Elizabeth Ann (nee Severn) and their four surviving children.

In the next four-room home was Betsy Straw (nee Hunt), the wife of Enoch. They had married on November 2nd 1878, by which time Betsy already had given birth to two illegitimate children with Enoch. Thirty three years later she had raised that number to 19, though only eight children were still alive — of which four sons were living with her. One notable absentee from the home was husband Enoch !! — he was residing in Burr Lane with son Joseph.

In the last home was 29-year old needlemaker and bachelor, Frank Bonser, son of John and Elizabeth (nee Baker) — alone in his three-roomed tenement. However he wasn’t to remain lonely for much longer … at the beginning of 1913 he married Ethel Barnes.

Now we are about to walk into the lower Market Place where we are greeted by the Parish Church of St. Mary.