The Independent Chapel in Pimlico 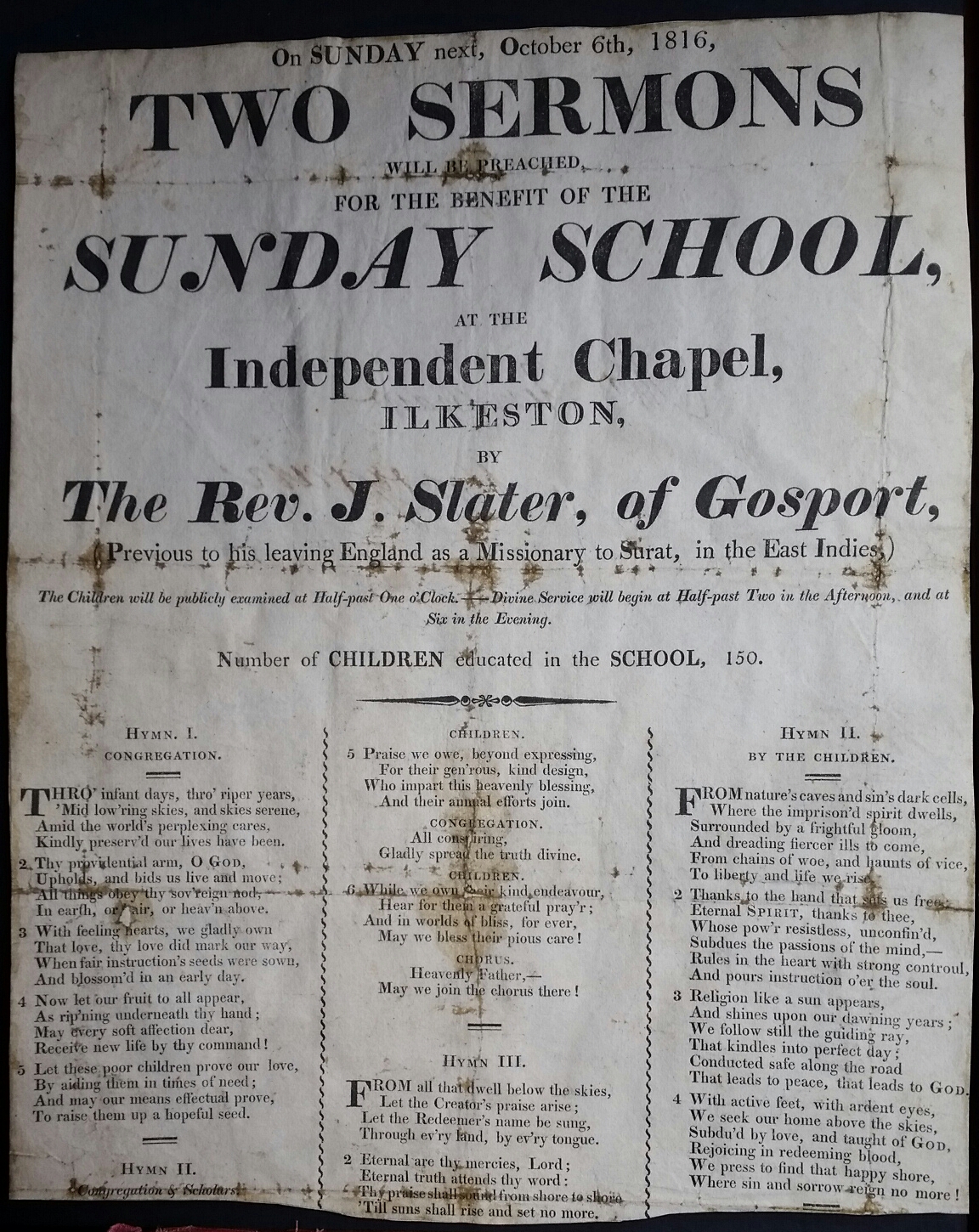 I only acquired the Independent Chapel handbill just over a week ago. It had been for sale at a local car boot event and a friend of someone I distantly know who lives on the Shipley View estate picked it up and listed it on eBay on ‘buy it now’. I bought it and collected it from him on my way to visit my mother.

Born in 1789, John Slater studied at Gosport, Hampshire, where missionaries of the London Missionary Society (at that time simply called the Missionary Society) prepared for their ministries. He was ordained into the Congregational Church in August 1816 and in April 1817 he married Jemima Pincutt Nicholson at Fareham, Hampshire.
Shortly after, he was appointed to serve in Malacca, East Indies, and departed in May of that year, arriving at in December 1817.
In July, 1818, on account of ill-health, John took a voyage to Canton, China — both the voyage and the visit benefited him greatly such that he was able to return to Malacca a few months later. On April 27, 1819, he left Malacca for Batavia (now Jakarta), where he arrived on June 18.
In 1822, again for benefit of his health, John took another voyage, this time to Singapore and Penang, and thence returned to Batavia.
On October 20th, 1823, he was’ suspended by the Board of the Missionary Society. Subsequently he dissolved his connection with the Society.
(Taken from the Register of Missonaries, 1796-1923, prepared by James Sibree, D.D., for the London Missionary Society).

Two photographs of the main entrance to the old Primitive Methodist Chapel that stood on the corner of Chapel Street / Burr Lane. They are unfortunately of poor quality, although the only images I know of, of the building. 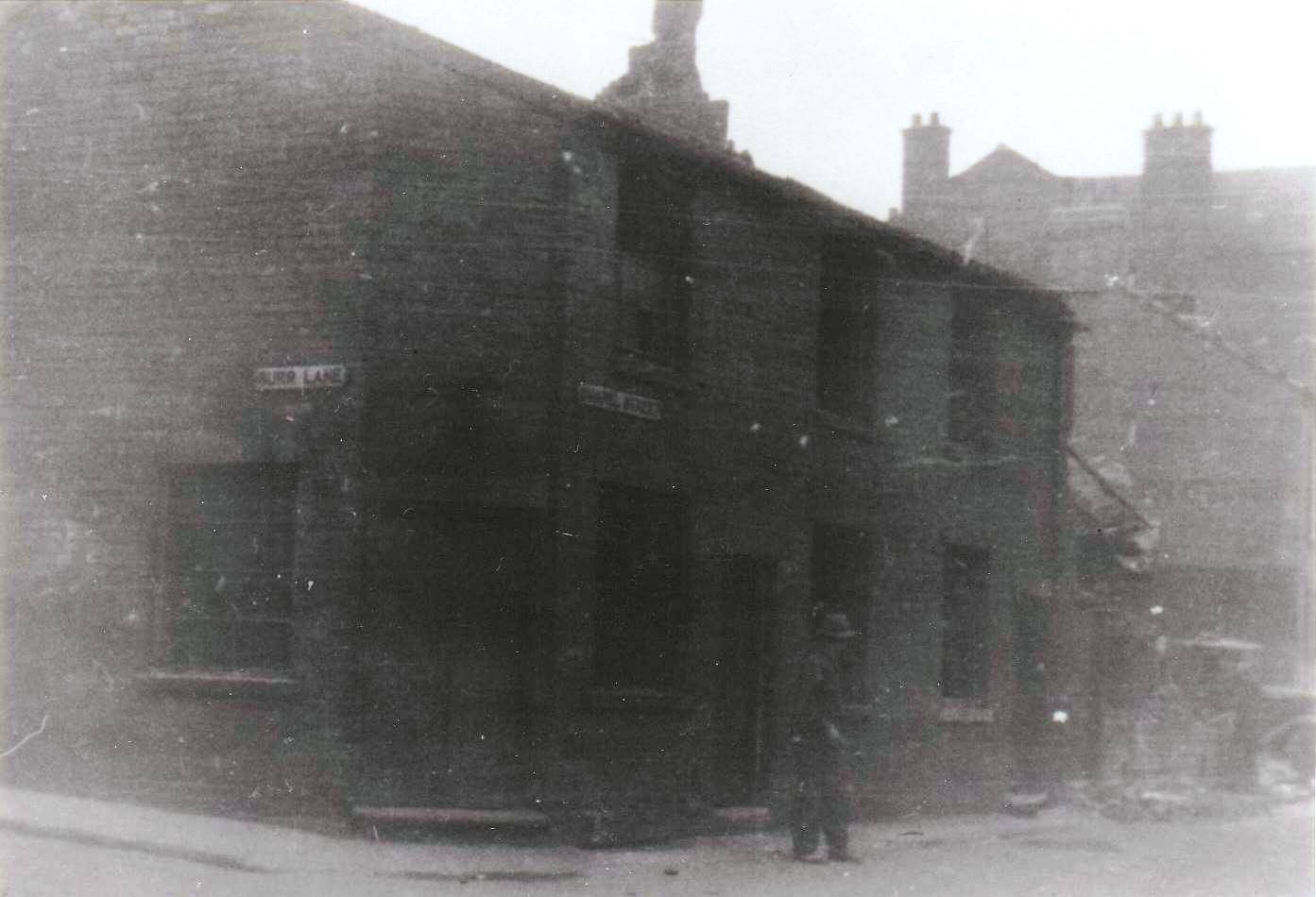 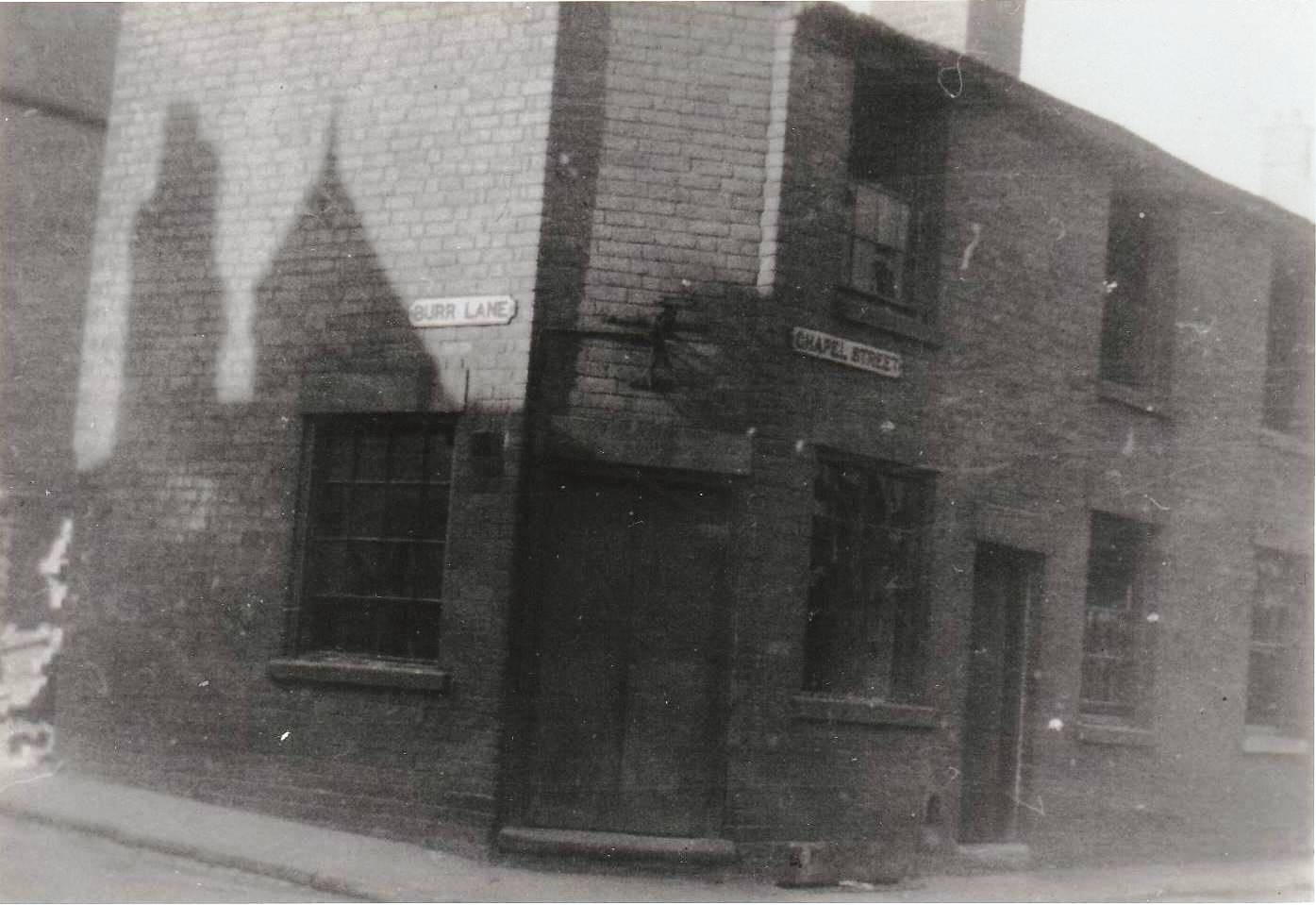 Just one question, the article on the Primitive Methodists states the old chapel, which had been split into two cottages was demolished in 1982 (Moorley). I thought it was very much earlier.

(Andrew is correct here. The two cottages could not have been demolished in 1982 as many years before that, the site had been tamacced over) 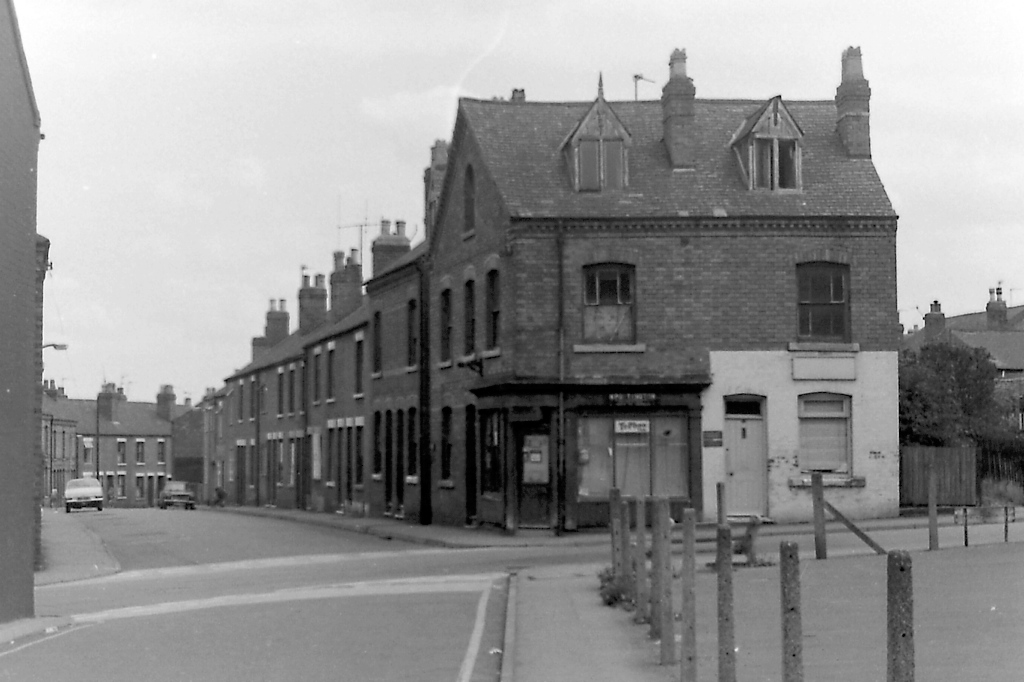 This shows the junction of Burr Lane/North Street, running right to left, and Chapel Street, running front to back in the 1960’s. The two cottages would have stood on the tarmac area, front right.

Talking with an elderly relative in the 1980s about his recollections of my family have several references to the chapel. One of these refers to an old photograph of a minister – I’m guessing possibly William Carthy – that used to hang in Isaac and Sarah Knighton’s kitchen, presumably at 28 New Street (1871 census) then 12 Chapel Street (1881 census) and finally 28 Byron Street, which is where my relative would have remembered it around the very early years of the 20th century.
Apparently there used to be a public right of way between the Slade chapel and the Flower Pot pub, leading up past Ball’s factory to Albion Place. However, the owner of Ball’s factory at the time built a wall to block access so the chapel’s minister got hold of a sledge hammer and caused controversy by demolishing it. I would guess this would most likely have taken place in the 1840s, although there’s no mention of it in the chapel minute book I have for that period. Is this something you’ve come across in your research? 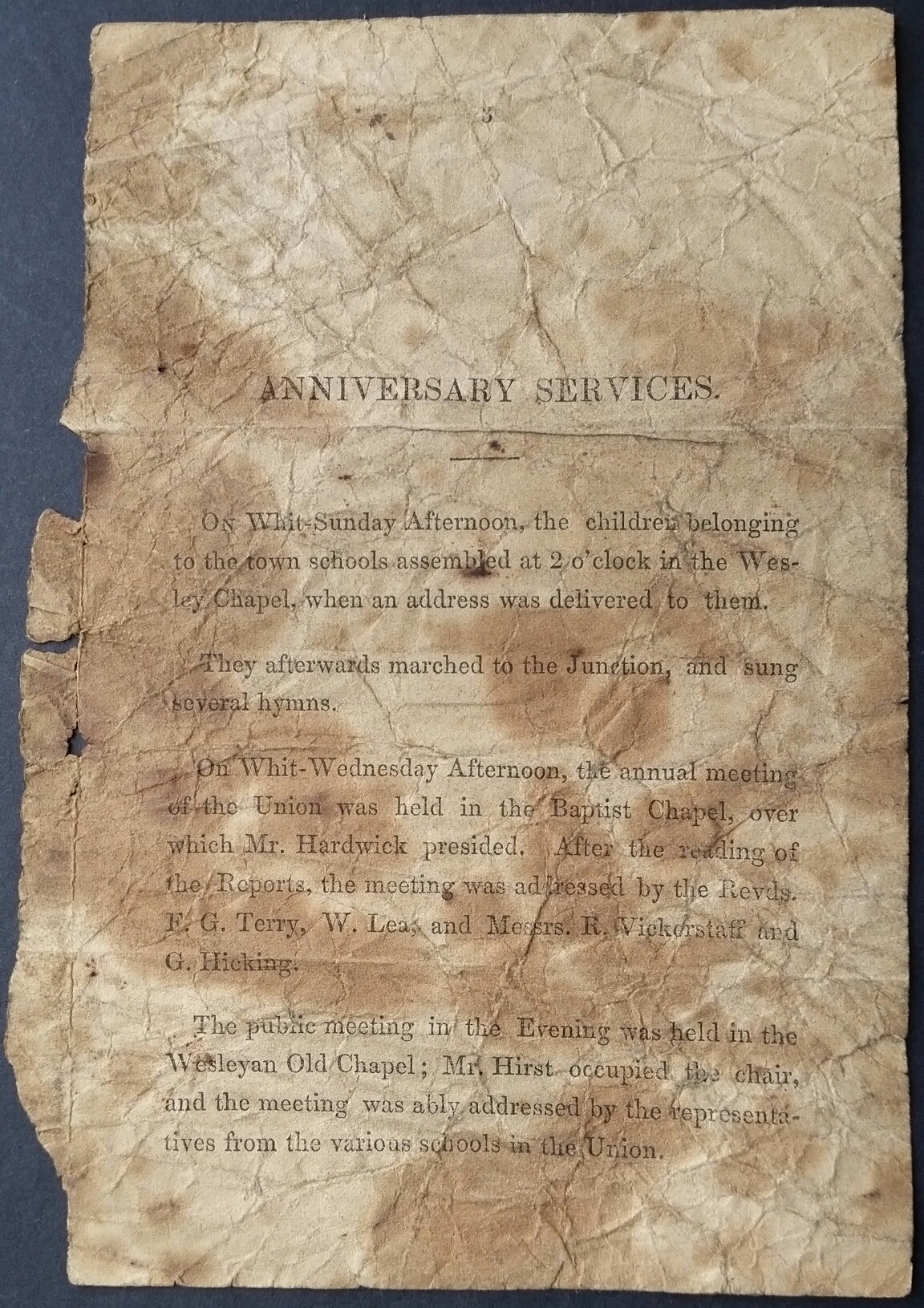 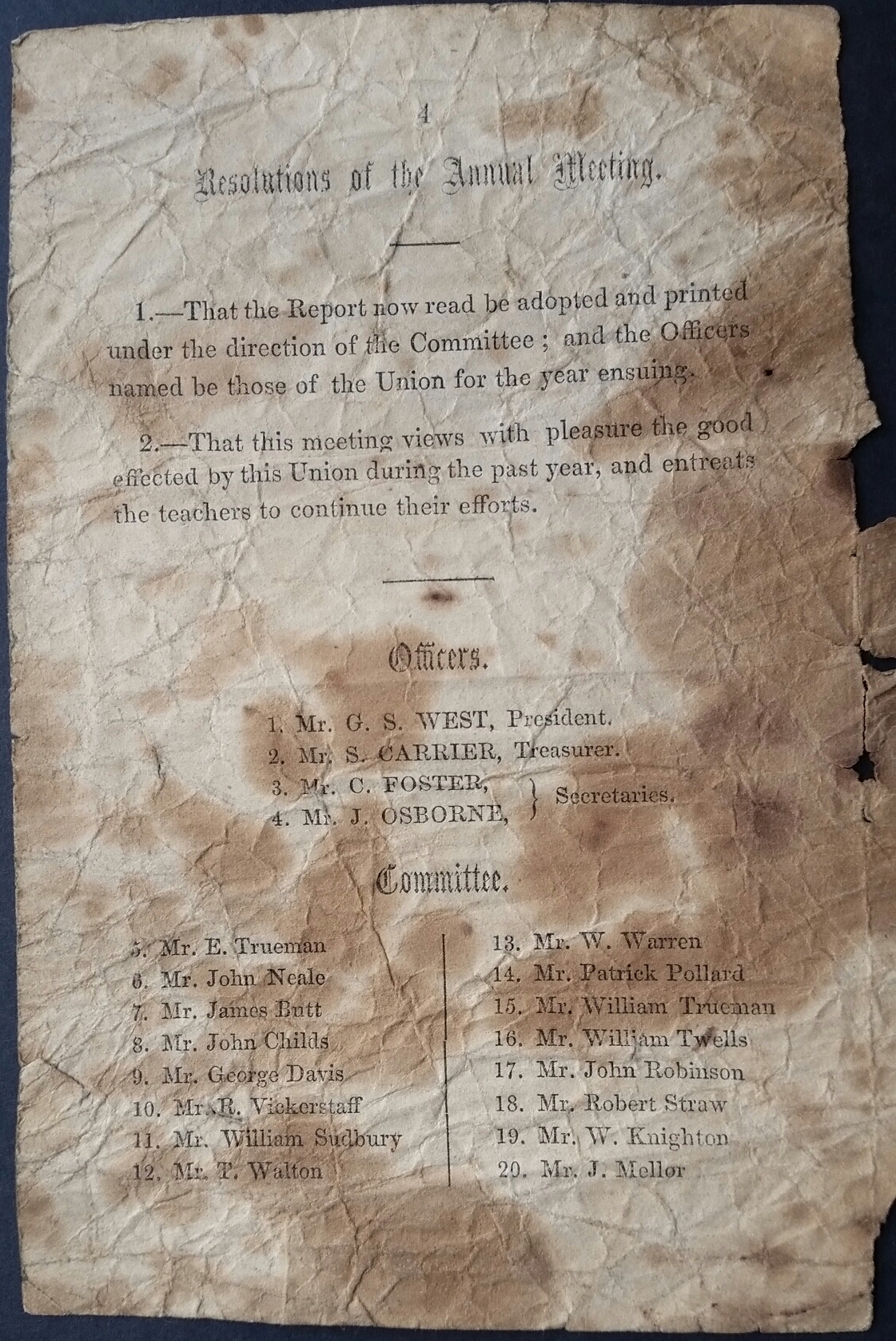 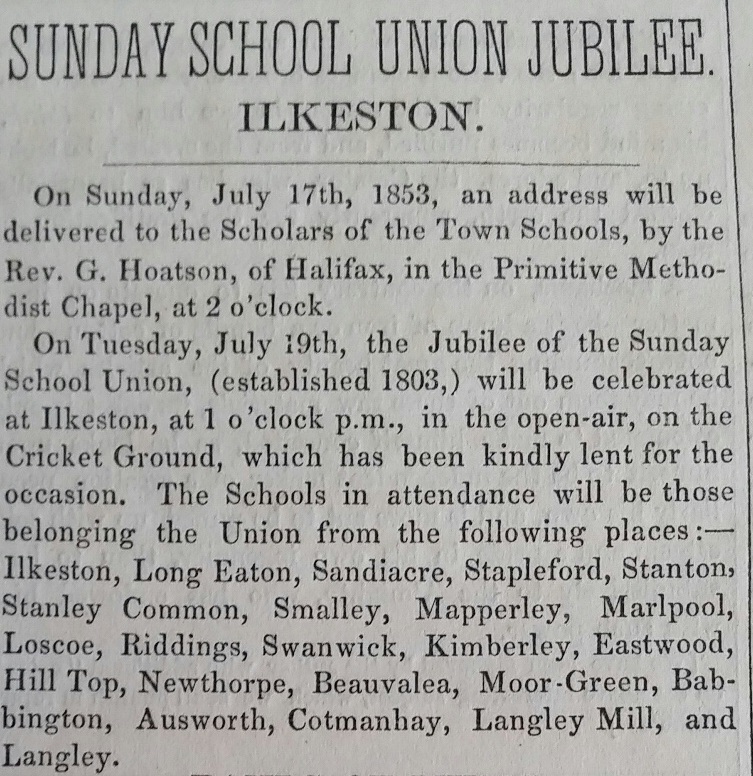 Also from the 1853 Ilkeston Pioneer (I have a bound volume for the year) a list of donors to the fund for rebuilding and enlarging parts of St. Mary’s Church. It might have more general interest because of the large number of Ilkeston families listed. Although the print is a bit small to read. 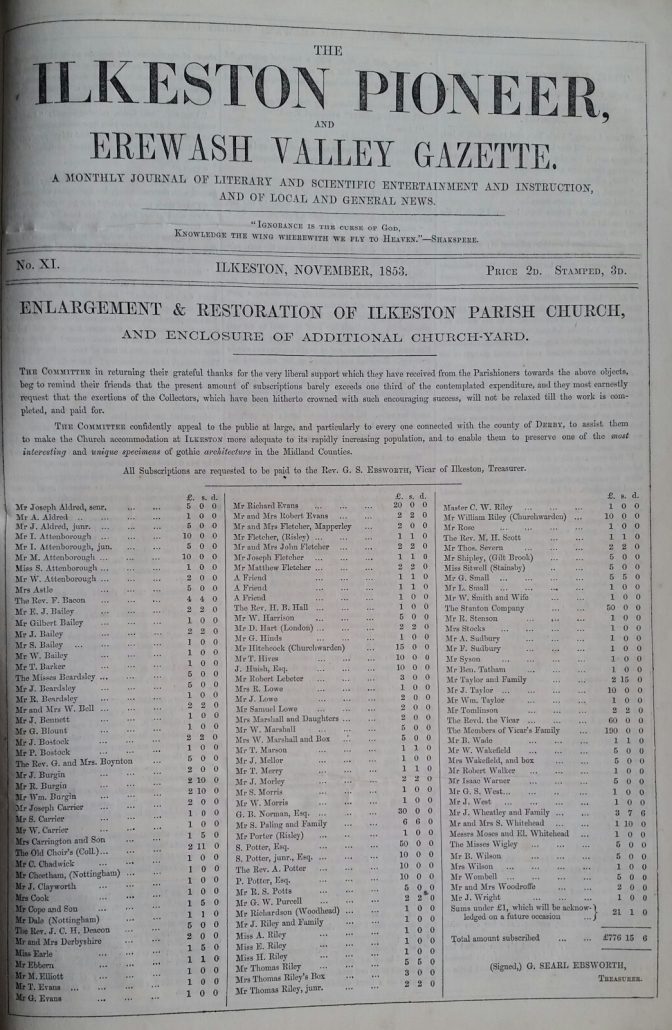 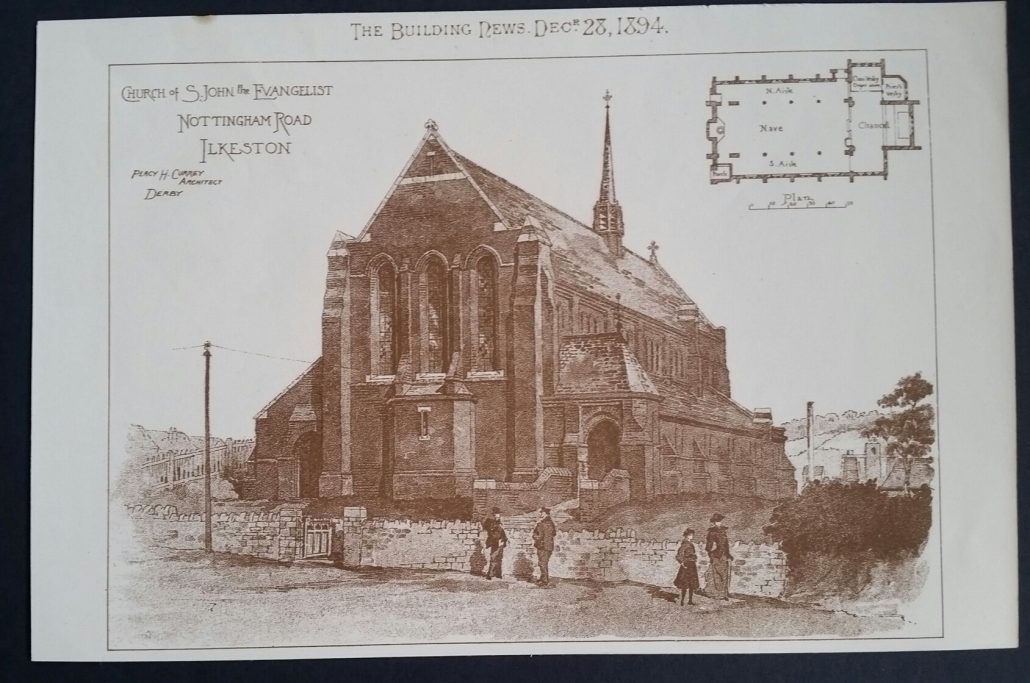 I also have a very large photograph of the Primitive Methodist band which my old relative said was taken outside the house of Isaac Potter who headed up the band. It’s predominantly the Shaw, Knighton and Potter men. The house was behind 99 Bath Street (opposite Woolworths) and accessed via an entry by 99 Bath Street, but I’ve never been able to find it on any maps. You might remember 99 Bath Street as the chip shop that only opened odd days, always very busy Saturday lunchtimes, and had no name above it hence we knew it as “99s”. If you had a knife and fork that matched, or matching plate/cup, you were lucky. Also the waitresses seemed to be all well into their
70s, at least. Quite an experience. Would it be worth me sending an image of the photo, with names?

As you enter the old Ilkeston General Cemetery in Stanton Road and stand at the gates, in the far left-hand corner lies the grave of Isaac Meer. Its rectangular perimeter stones are broken and scattered, and the site is overgrown with grass and bushes.

Isaac was born in Ilkeston on January 31st 1836, the son of Isaac and Mary (nee Riley). His father was a life-long shoemaker/cordwainer though Isaac junior worked as a coal miner. On January 24th, 1859, at Ilkeston Independent Chapel, he married Harriett Tunnicliffe, the only surviving daughter of house-painter William and Mary (nee Rogers), of Moors Bridge Lane (later Derby Road). Six weeks later Harriett died in childbirth, on March 7th … the unnamed son died at the same time, having enjoyed life for only 20 minutes. They were buried at St. Mary’s Church three days later.

Seven months after this, Isaac married his second wife, Sarah Wardle, at St. Mary’s Church, on October 17th. Born in 1831, Sarah was the only daughter of labourer Joseph and Hannah (nee Straw), and at the time of her marriage, had a two-year-old son, Joseph, who initially became a ‘Meer’. 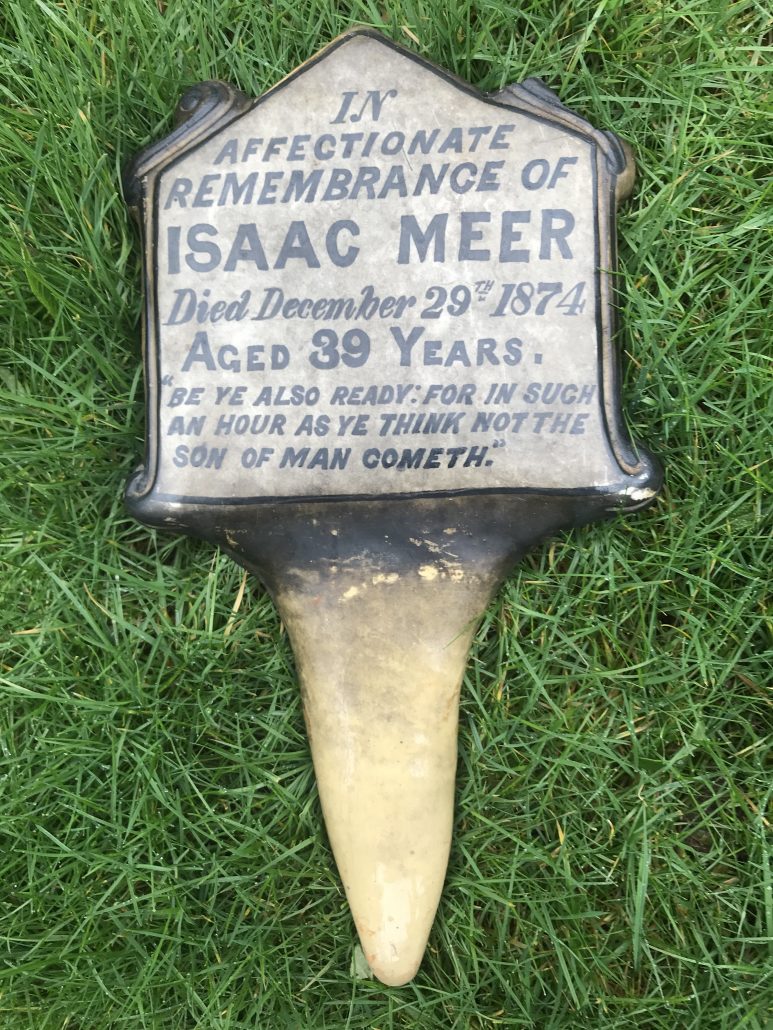 Left is the grave marker placed on Isaac’s resting place.

He was registered as aged 39 (!!), and was buried on Sunday afternoon, 3 pm, on January 3rd 1875, …… as described above, in a third class section of the cemetery, his grave costing 8s. with inscriptions … ‘at rest‘ and ‘Be ye also ready: for in such an hour as ye think not the son of man cometh’.