It was from 10 Ossington Villas, on her birthday in 1886, that daughter Elizabeth Adeline Columbine married William Alfred Wells, cabinet maker of 32 Skynner St, Nottingham, at Holy Trinity Church, Nottingham. The couple remained at Ossington Villas where son Alfred Percy was born in 1887.

The census also records that Adeline had been married for 24 years and had one other child who had died.
This child was daughter Winifred Adeline Wells who died on February 11th, 1890 at 10 Ossington Villas, aged seven months. She was buried in grave 15749A in Nottingham General Cemetery, later to be joined by her maternal grandparents.

In 1904 son Alfred Percy gained success as an external student for the University of London in the Intermediate Examination in Science, being placed in the First Division.
And then this, from the Sussex Agricultural Express, Nov 19th 1909….
‘In connection with the scholarship system maintained by the (Education) committee (of East Sussex), the attention of the council is directed to the following success, viz — Alfred Percy Wells, who holds a major scholarship, took his degree at Cambridge, being placed 54th in the Honours list of the Mathematical Tripos’.

(My thanks to John A Goulder who spotted this and sent it on to me).

Elizabeth Adeline Wells died at Eastbourne on August 4th, 1944, aged 89.
She was then still living at West Bank, 34 Mill Road, her residence for over 40 years, and was killed in a road accident at the junction of Terminus Road and Langney Road.

It was Friday and Adeline had left her husband at 2.15pm in Cornfield Road to go to the Picturedome cinema in Langney Road. She was about to see Walt Disney’s ‘Snow White and the Seven Dwarfs’, which the cinema had obtained for part of the school holidays, and stayed to see the support ’feature’, the musical ’Nobody’s Darling’. Coming out of the building just after 5pm, Adeline stepped off the pavement in front of an R.A.F. lorry driven by L.A.C.W. (Leading Aircraftwoman) Patricia Lewis, a member of the Women’s Auxiliary Air Force. Despite braking and swerving, the lorry hit Adeline, causing severe and fatal injuries to her head and chest.
At the inquest on the following day it was reported that death ‘must have been instantaneous’, and a verdict of ‘Accidental death’ was recorded, no blame being attached to the driver of the vehicle.

Adeline was killed on August 4th, just as she left the Picturedrome Cinema, late afternoon. What film had she been seeing and perhaps thinking about as she walked home ?? 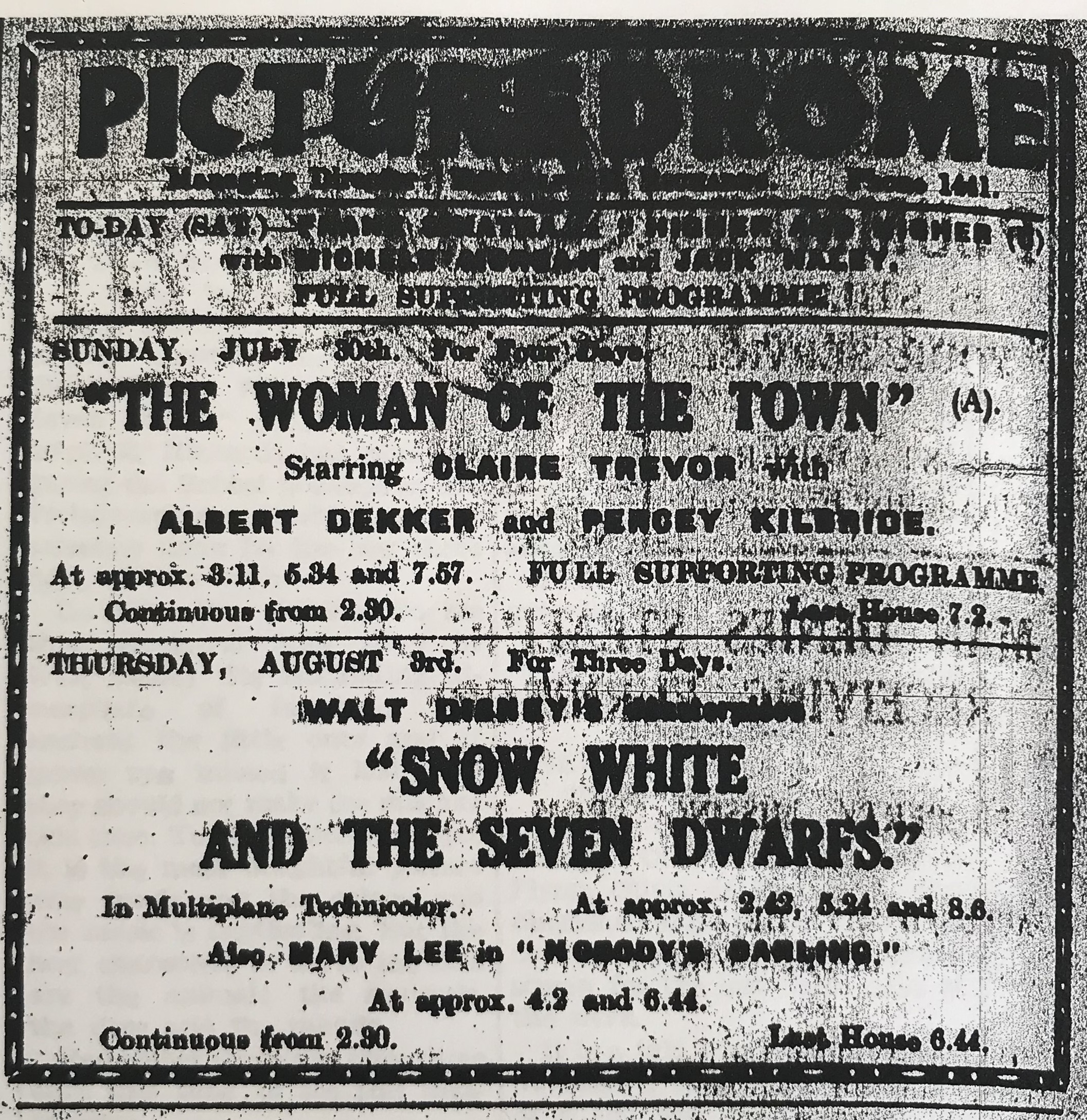 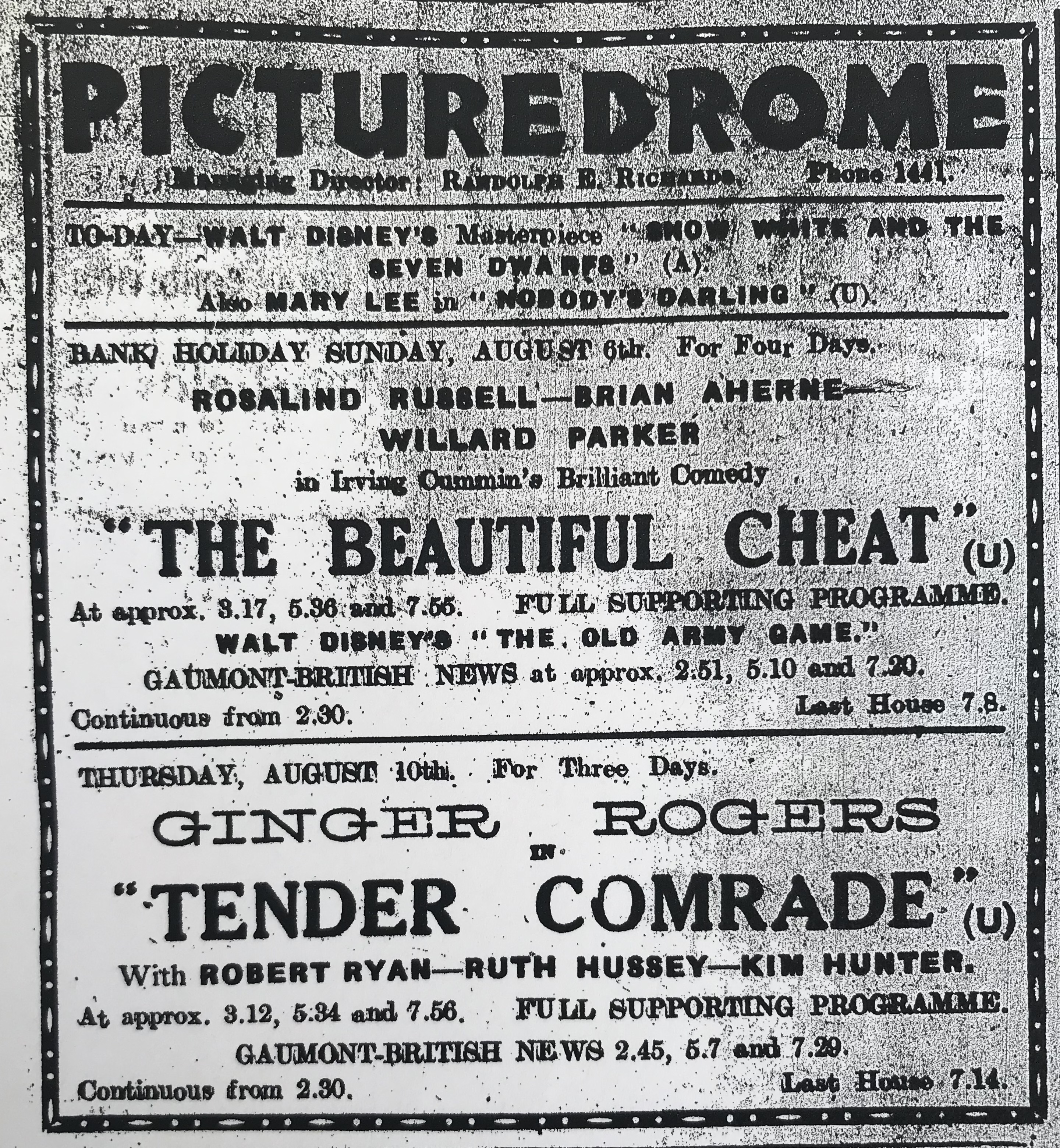 My thanks to the staff at Eastbourne Central Library, especially Dhimati Acharya, Sammi Hyde and Sarah Kyne, for supplying the information surrounding Adeline’s accident and death).

Adeline was buried at Ocklynge Cemetery in Eastbourne, at 11am on Thursday, August 10th.
In her will she left nearly £4000 to her husband, now an Inspector of Weights and Measures with the Eastbourne Corporation, and to her schoolmaster son.

Their son Alfred Percy married Muriel Ethel Mellersh of Fulham in 1918. By 1939 the family had moved to Royal Tunbridge Wells where Alfred Percy was employed as an assistant schoolmaster.