Coming back from beyond and retracing our steps up Station Road, we come to a narrow side road.
Here in later years Mr. Shaw built a small house, in which he and his family lived.
I remember two of his daughters, Frances and Janey.
Continuing through this road we come to another lane, which is now Lower Chapel Street.
Here was some old property, with backs up to the road.

The ‘narrow side road’ mentioned by Adeline may be the southern part of North Street between Station Road and Chapel Street before it joined with Burr Lane. That is where the Shaw family had its home on the 1881 census.

It was part of the estate of George Blake Norman and the Shaw home comprised a cottage, orchard and two closes of land called the ‘North Field’ — which was used as a brickyard in 1881– and the Spicer Close. It was just over 12 acres in area.

Samuel Shaw was born in Kimberley about 1830 the son of collier William and Alice (nee Revell) but lived the majority of his life in Ilkeston.

On August 7th 1854 he married Jane Smith, daughter of Joseph, lacemaker of Awsworth Road, and Maria (nee Cook) and did not wander far from this area for the rest of his life.

Samuel played a prominent part in the business, social and religious life of the town.

As a young man he began an association with the Primitive Methodist chapel, and for many years was a local preacher and trustee for both the Bath Street and Nottingham Road chapels, as well as providing service to the Sunday school.

The Ilkeston Advertiser of 1904 recalls that “in early life he was a contractor at the ironstone pits situated near the present Bennerley furnaces after which he worked his own land for getting coal”. Then for over 30 years he was a brick maker using the clay lying beneath his land.

Samuel retired in 1893, leaving his oldest surviving son Samuel junior in charge of the business and leaving himself free to travel extensively. He visited the Channel Islands, the south of France, several health resorts but particularly enjoyed Wales. There he could pursue his fishing, the sport of which he was passionately fond.

In politics Samuel was ‘an independent Conservative’ and for some years was a member of the Local Board. However he had not held public office for many years before his death in January, 1904 in Lower Chapel Street.

By that time he had just seen son Samuel elected to the Town Council but did not see him made mayor in 1910.

Samuel and Jane had at least ten children, the eldest two recalled by Adeline.

Daughter Jane Maria married Thomas Beniston, hosiery warehouse manager, in 1876 and in the following year her sister Frances Alice married William Holbrook, painter, plumber and paper hanger. The latter established his business initially in Station Road and then, about 1888, moved into Bath Street. By the end of the century the family was living in Nottingham.

But what of the others?

Born May 16th, 1862, Samuel junior (right), like his father, was a brick manufacturer, and in 1885 married Lydia Emma Evans of South Street, the daughter of sanitary inspector Thomas and Ann (nee Jones).

and also like his father, played a significant part in civic affairs. In the early twentieth century he served on the Town Council and was elected Mayor in 1910 .. and thus he features in the town’s Coronation booklet of 1911 (supplied by Mike Hallam) 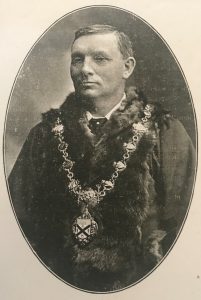 Joseph William (1864), like his brother, remained in Ilkeston, married Kate West in 1887, and traded as a bricklyer/builder.

Isaac (1866) trained as a colliery clerk, married Hannah Millicent Chapman of West Hallam, and continued to live in Ilkeston.

Agnes (1868) actually left Ilkeston after her marriage to John Edwin Walker, lace machine engineer of Kimberley in 1894. They departed for Nottingham

Frederick Charles (1870), another brickmaker, married Harriet Elizabeth White, in 1892. They too made Ilkeston their home.

Jane died eight years before her husband and both are buried in the same grave at Park Cemetery.

We are now set to continue up Bath Street to Jack Lee’s Yard.