We have just visited some of the families living in and around Albion Place, and on the west side of Burr Lane.

Thanks to the document archive of Jim Beardsley, we can now explore one specific part of Burr Lane, shown in the plan below … eventually focusing on one terrace of six houses there. 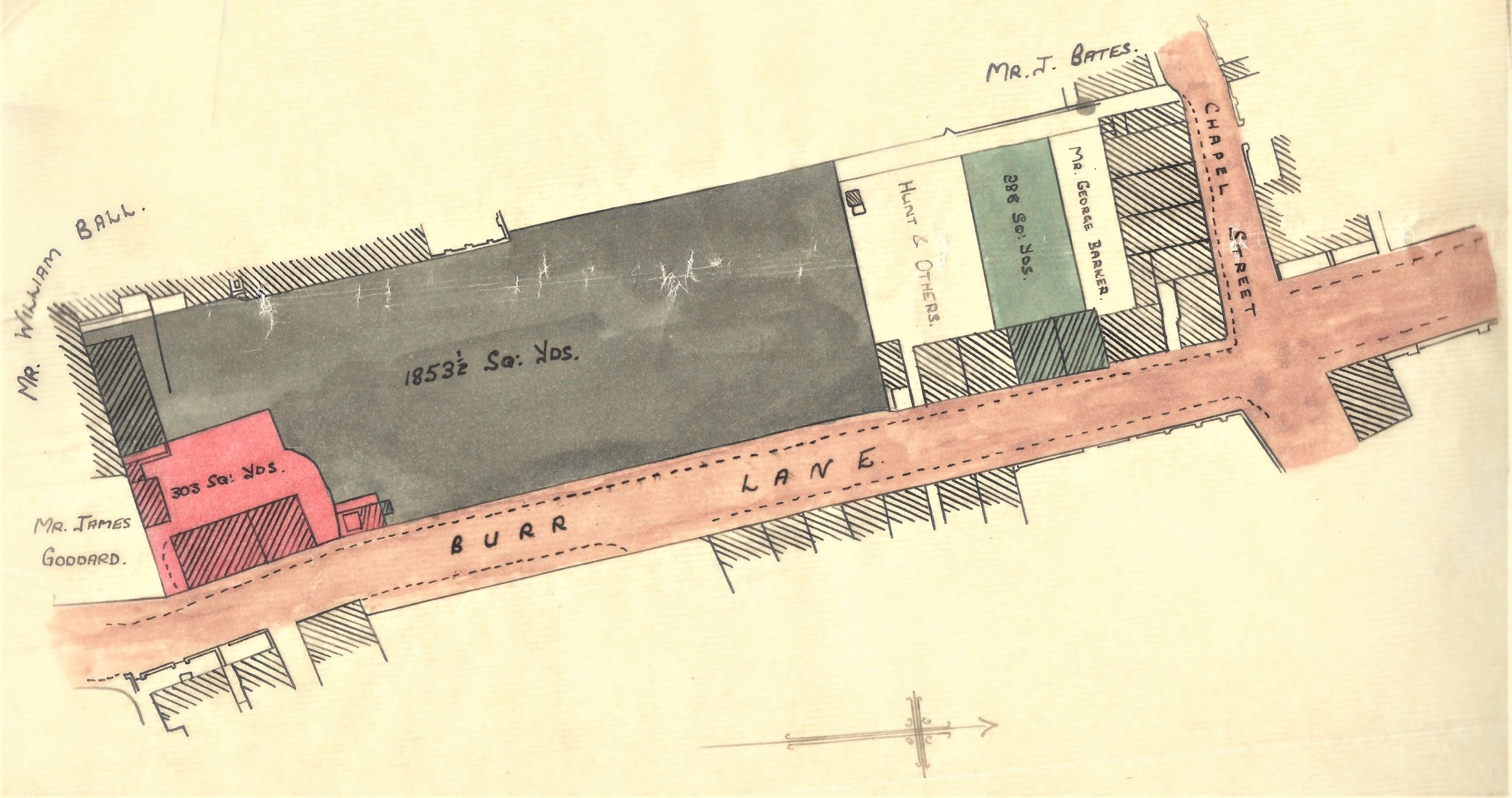 Plan 1: taken from an Abstract of the Title of the personal representatives of Charlesworth Bennett Wood, 1935

On July 7th 1879 at Ilkeston Manor Court, John Ball was granted possession of property in Burr Lane, previously owned by Thomas Sisson and others. This included premises with a workshop, washhouse, other outbuildings and a yard, previously the home of John Gregory*, and occupying 303 square yards. It can be identified on the plan above as the area coloured pink (or is it red ?). As you can see, its eastern boundary was Burr Lane while in the south were the properties mainly of James Goddard** but also (a little) of William Ball***.

* John Gregory was an ironstone contractor living in Burr Lane; he died in 1880
** James Goddard was the builder who lived in East Street
*** William Ball was John’s father

On the west and north was a much larger area of 1853½ square yards, coloured grey on the plan, previously occupied by John Gregory. (The area was referred to as ‘blue‘ in colour, but looks more like a ‘grey‘ in the copy here). Mostly taken up by garden area, in the south-west corner was situated a factory or workshop — line-shaded on the plan.  The late hosier Thomas Trueman* (who died on January 6th 1846) had once operated wide frames in this ‘factory’ and had also occupied the garden area.

*On the 1861 Ilkeston census for this area, you will find several occupants of “Truman’s Row” named after Thomas.

John Ball was now granted an equal half-share in Trueman’s workshop as well as an equal share in the garden in which it stood — the area of  1853½ square yards. The other half was owned by George Barker (see below). The premises and land to its north were owned by Kezia Hunt, the wife of East Street barber and tailor William Hunt, and the daughter of the deceased Thomas Trueman from whom she may have inherited this land ? On its south was land of William Ball as well as the 303 square yards described above. Most of the east side was taken by the frontage to Burr Lane, while on the west was property of both William Ball and ‘Mrs Evans’. (I suspect that this may have been Diana Evans (nee Shaw), the widow of George Evans, a potter who once owned premises in the Chapel Street area including the Flower Pot beerhouse).

The auction (on the right) must have caught the eye of John Ball because he, or his representative, attended it and left clutching the document (on the left)

I’m pretty sure that John had no interest in purchasing property in Cotmanhay, at Mount Pleasant or Horridge Street, but was certainly keen to expand his Burr Land holdings … and Lot 4 gave him that opportunity.

The detail inside the Auction document shows that John paid £166 for the two cottages, and although they were occupied by James Hufton and James Sinfield at the time, they were just tenants. 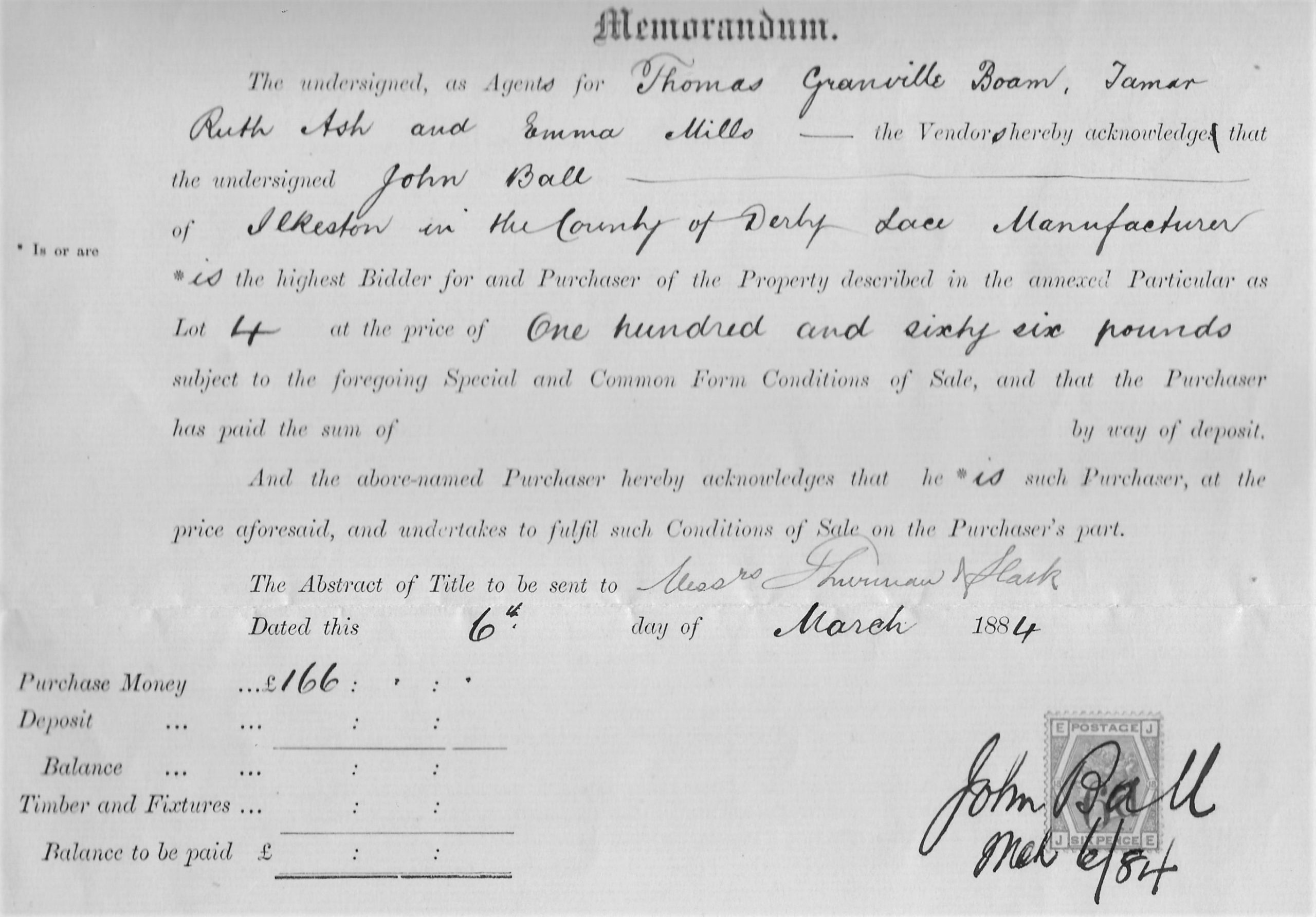 The three vendors had acquired the property via the will of the same Thomas Trueman, their grandfather, mentioned above. They were ….
Thomas Granville Boam, a railway engine driver, son of Tamar Ruth Trueman who had married Shipley-born engine worker Samuel Boam in 1827.
Tamar Ruth Ash (nee Boam), sister of Thomas Granville Boam. She had married labourer Charles Ash in 1869.
Emma Mills (nee Boam), sister of the other vendors, who had married Staffordshire iron moulder Thomas Mills, in 1861.

At a subsequent court, on April 15th 1884, John’s acquisition of the two cottages was confirmed. The two premises are coloured green on Plan 1 (that’s the area measuring 288 square yards).

As previously described, George Barker also owned a half-share in property in the street. In 1891 he was living at Malin House in St Mary Street and was the Registrar of Births and Deaths Registrar; he was also described as an estate agent and accountant.

On November 27th 1891 he sold his half-interest in the workshop on his property, and the garden in which it stod and abutting Burr Lane, to John Ball for the sum of £25.

Thus John now owned all the property coloured red, grey and green on the plan.

On April 8th 1919, while living at Dodson House in Burr Lane, John Ball made his will. He appointed his nephews William, son of his older brother Thomas and Louisa (nee Tansley), and Charles worth Bennett Wood, son of his sister Elizabeth Ann Wood (wife of Dr Robert Wood) as executors and trustees of the will. He left all his real and personal estate to his nephew, the same Charlesworth Bennett Wood. 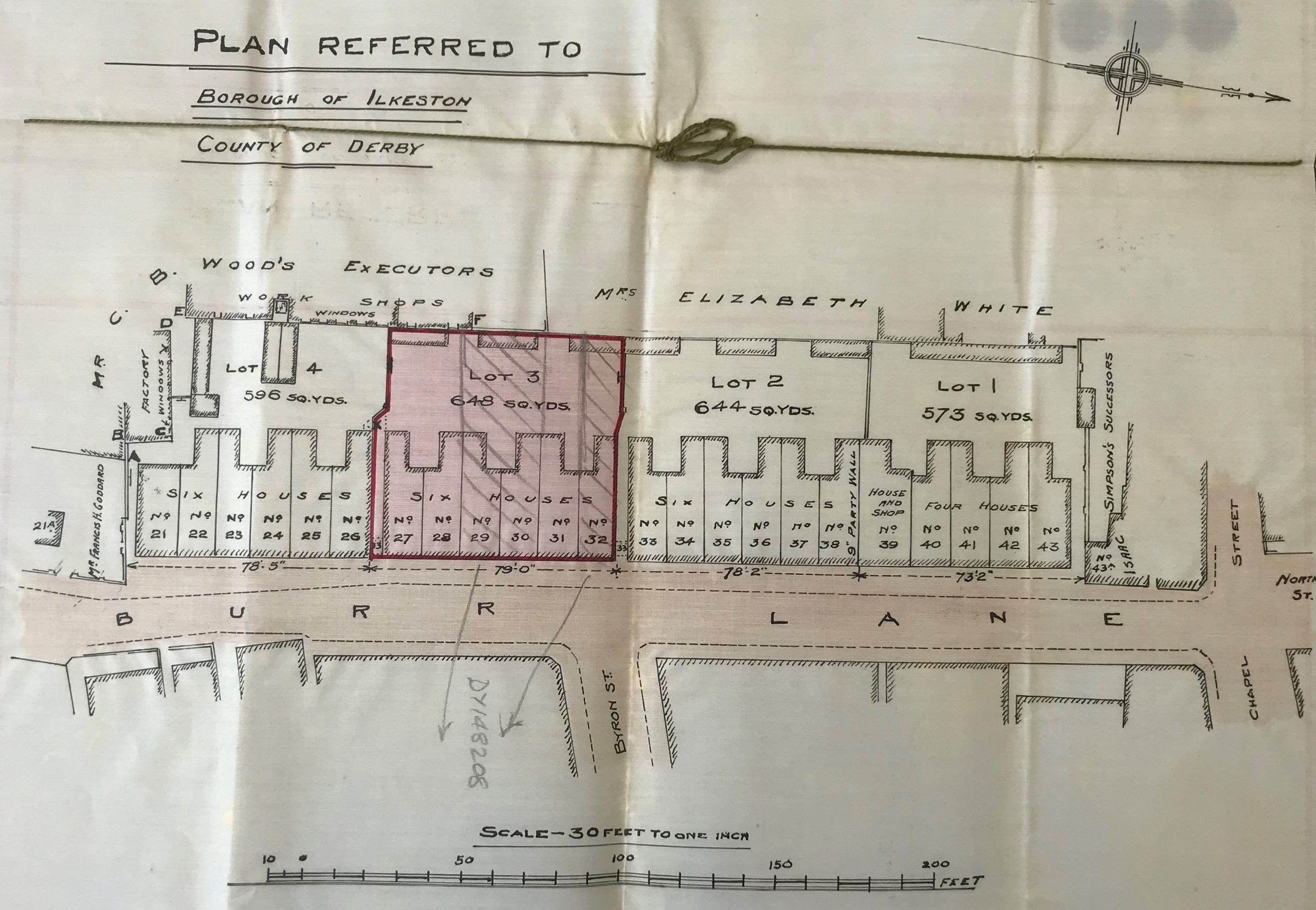 (Above) Plan 2: taken from a Conveyance document, dated November 23rd 1935, between the Executors of Charlesworth Bennett Wood (dec) and John Thomas Lally

(Below) Housing on the west side of Burr Lane, just before demolition … on the extreme left of Plan 2 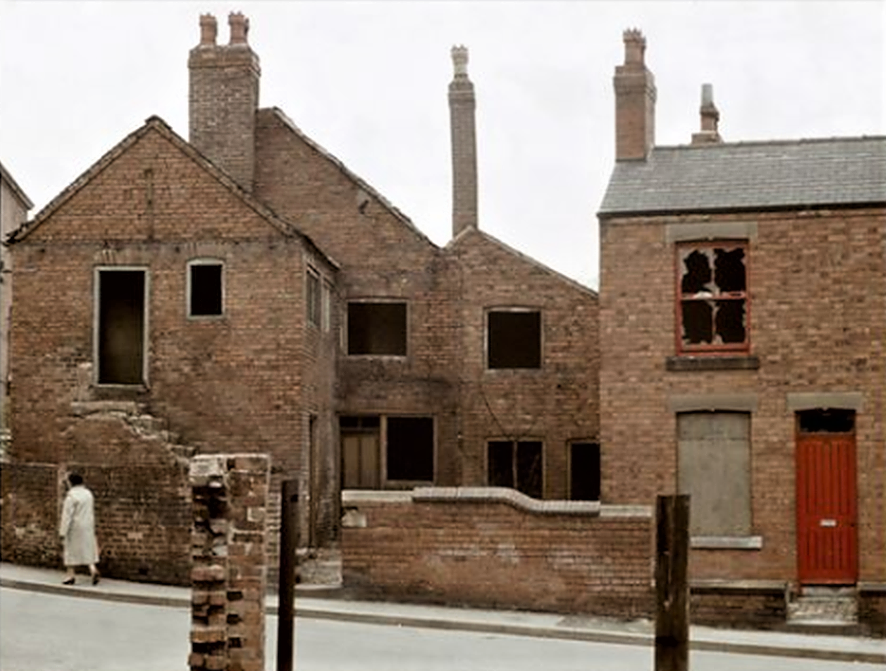 John Ball died at Dodson House on September 26th 1921. Thereafter, the two executors paid off all John’s expenses and debts, death duties and the financial legacies which he had made. And finally, on June 1st 1933 Charlesworth Bennett was able to claim his property inheritance.

This included 23 Freehold premises in Burr Lane, numbers 21 to 43 (shown above)

Charlesworth Bennett Wood made his will on December 2nd 1933, appointing his wife Clara (nee Sutton), his son Robert John Charlesworth Wood, and his brother-in-law Nelson Haddon Sutton as executors and trustees of the will.

On November 23rd 1935, the three executors sold six houses with outbuildings etc. in Burr Lane, on land of 648 square yards and with a frontage of 79 feet to Burr Lane. They were then numbers 27 to 32 (shown above in red), the purchaser was John Thomas Lally, plumber of Whitworth Road in Ilkeston, and the price was £1150.

The sale agreement was stitched up very tightly, in favour of the three vendors who still retained property in this area. As you can see on Plan 2 above, they owned work shops to the west of the six houses and they ensured that their rights were clearly written into the agreement. John Thomas Lally was not allowed to obstruct the ‘full free and uninterrupted access and enjoyment of light and air‘ into the work shops; this was to apply to any existing windows or even new windows, should they be added to the work shops !! And, in addition, they reserved the right to alter or add to their buildings and perhaps obstruct or interfere with ‘light and air’ of John Thomas or his tenants. (This concerned the property between points E and F … you have to look closely). John Thomas also had to agree to build a wall, to replace a gate, at point X on Plan 2, to block access to the neighbouring houses.

Walking down Burr Lane, away from the Market Place …… 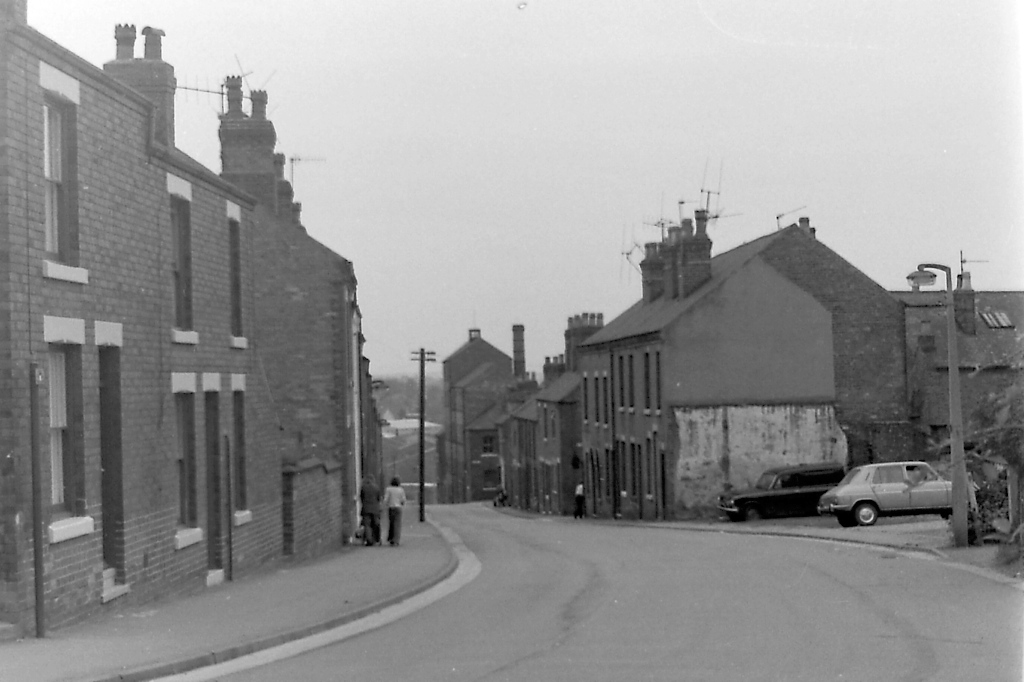 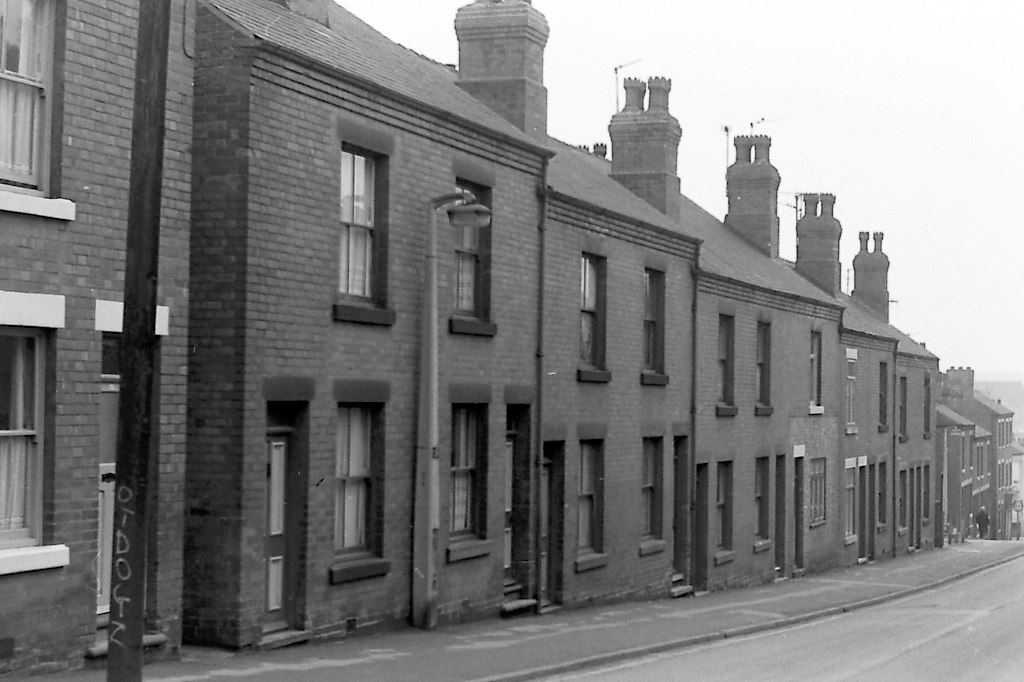 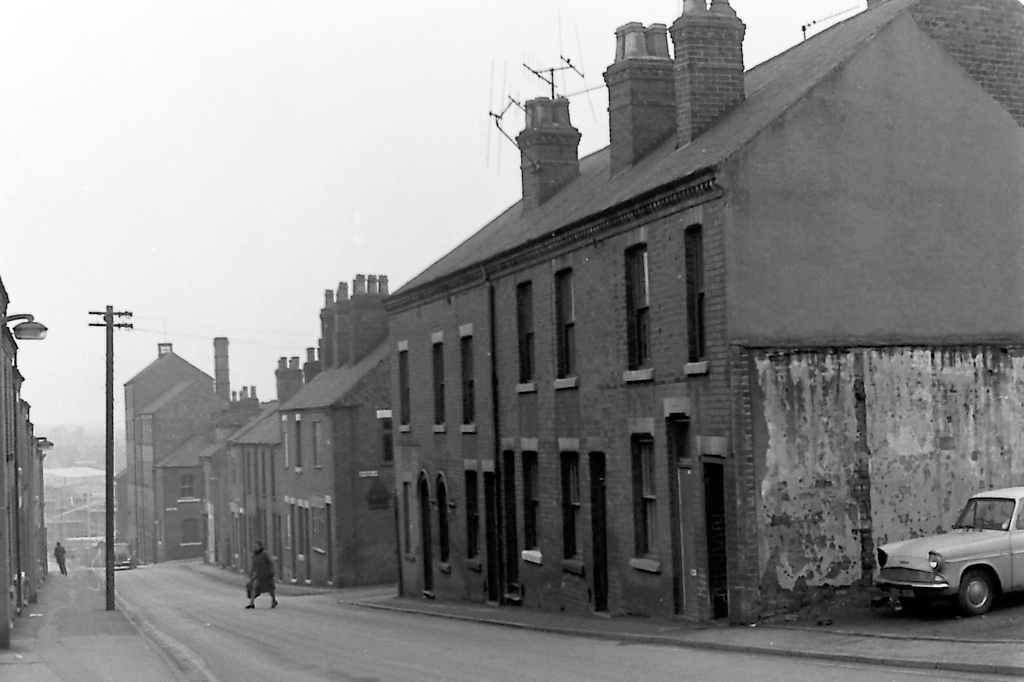 … and across the lane the houses we can no longer see …

…. the houses on the eastern side have  now been demolished to make way for Ilkeston’s relief road. Here we are standing in Byron Street, looking back at Burr Lane, (c1984) before the relief road was built.

Still in Burr Lane, there lived one of Ilkeston’s many Goddards.