When we were earlier visiting Solomon Beardsley, the baker who lived further up Bath Street, towards the Market Place, we paused to consider all the other ‘Solomon Beardsleys‘ who lived in Victorian Ilkeston. Apart from the usual male name choice of John, Joseph, James, Samuel, William, Solomon was a popular chice amongst Ilkeston’s Beardsley clan — and so too was Mark. Let’s consider how many we can discover…. in chronological order. The first two have been described above but I will summarise them.

1  We start with the Mark Beardsley, born in 1805, who survived well into Victoria’s reign, dying on April 29th 1877, at 2 Granby Street, aged 72.
He was the son of coalminer Solomon and Mary (nee Gregory) and so, the younger brother of John Beardsley, the grocer who traded at London House in Bath Street. Like his father, Mark was initially a coalminer and then a stone miner. After his marriage to Sarah Trueman on August 28th 1826 the couple lived on the Common for the rest of their lives, where their four children were born. His wife was the first child of coalminer James Trueman and Sarah (nee Bostock) and one of her brothers was John who later became the landlord of the Durham Ox.
Mark was an elder of the Ebenezer Chapel in Awsworth Road. In 1872 the fast-growing population of the town dictated that this chapel should be altered and enlarged — in fact the old one was pulled down ! On September 24th 1872 the foundation stone of the new chapel was laid on the same site, by Mark and his fellow elder, Samuel Richards senior, grocer of Cotmahay Road. Under it were placed a short history of the church, a circuit plan, a list of the trustees, and ‘some other interesting items‘. As was often the case, local benefactor Richard Evans of Ilkeston Pottery stepped in lend a helping hand — he opened his gardens to visitors and provided a large room at his pottery works where a group of some hundred persons sat down to enjoy a celebratory public tea.
Both elders Mark and Samuel attended, but thereafter had only a few years more to enjoy their new religious home. 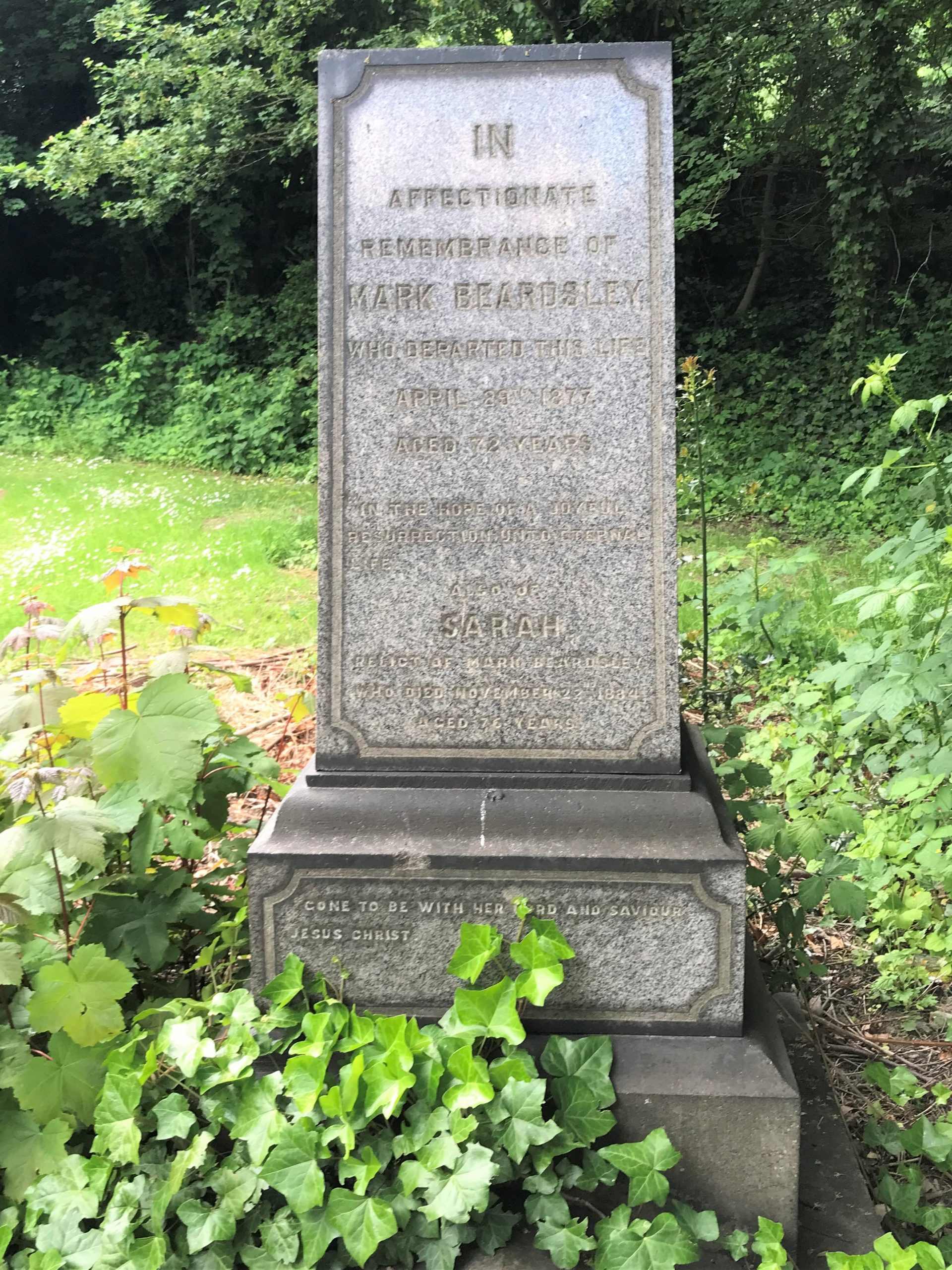 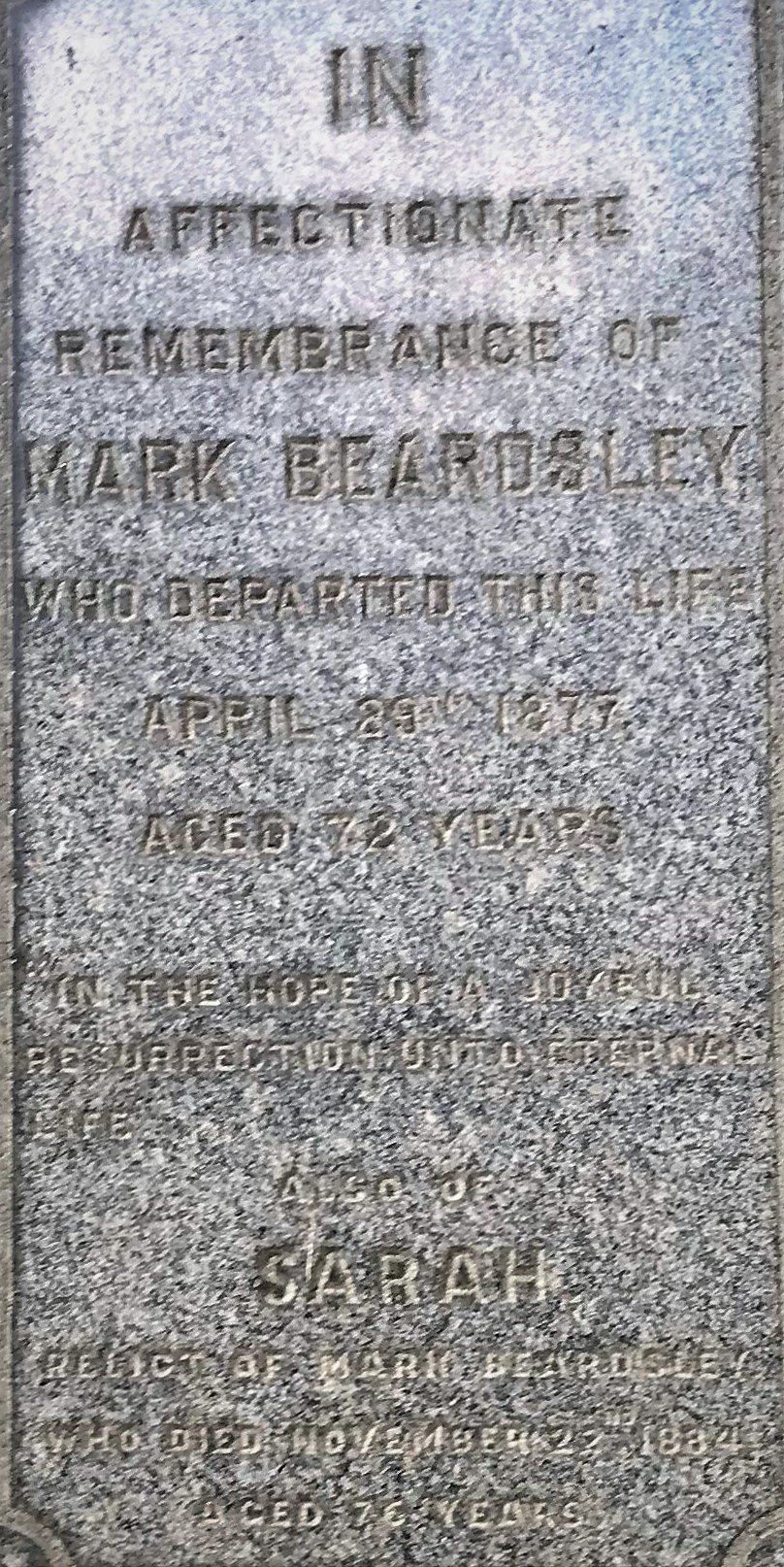 3  The first to be born in Victoria’s reign was Mark Beardsley, the son of coalminer Enoch and Hannah (nee Straw) of Ilkeston Common; he was born and died in 1851.

4  An equally short-lived life was that of Mark Beardsley who was born on May 7th 1856 at Ilkeston Common, son of miner James and Ruth (nee Sisson); he survived for 16 weeks. His paternal grandfather was Mark Beardsley (see number 1)

5  Just before the death of Mark 4, another Mark Beardsley was born … on August 16th 1855. He was the son of Mark 2 and Catherine (nee Phillips), the cousin of soon-to-be-deceased Mark 4, and destined to be the third Mark Beardsley to occupy the Spring Cottage Inn. However, at the time of his marriage to Jane Breffitt on November 27th 1881 he was still working as a coalminer.
Jane was the daughter of Edward Breffitt, a well-established glover and hosier of Basford, and his wife Ellen (nee Sugden). As a young woman she left Basford for Ilkeston and, at the time of her marriage, was boarding with her future sister-in-law Sarah Ann Mather (nee Beardsley, who had married Thomas Mather). However, at the culmination of the ‘Victorian Age’ Jane was with her husband Mark, serving pints at the Spring Cottage.

6 Mark Beardsley was born in June 1861 to Grass Lane coalminer Frederick and Charlotte (nee Sisson). He died at the beginning of the following year.

7 Born in 1867, Mark Beardsley was the son of coalminer Solomon and Hannah (nee Bostock). The father was the son of Mark 1 and the brother brotherof Mark 2, and this Mark was also a coalminer like his father.

8 Mark Beardsley, son of blind grocer Isaac and Julia (nee Davis) was born in Grass Lane (later Norman Street) on November 16th, 1870. He lived there for the next eight years, when, on April 23rd, 1879 Dr. Robert Wood was called to the home after the lad had fallen seriously ill. The doctor immediately detected that many of the rooms in the Beardsley house had been recently painted and this coloured his diagnosis — a case of ‘painter’s colic‘; over time the boy had inhaled noxious lead fumes, resulting in fatal blood poisoning. Mark died the next day.

9  Less than two years after the death of Mark 8, another Mark Beardsley ‘arrived’ in Grass Lane — this was the son of coalminer George Henry Beardsley and his wife Mary (nee Webster), born in January 1881. Like Mark 8, George Henry was also a son of blind grocer Isaac Beardsley; thus Mark 9 would have been nephew to Mark 8.

10  The last (?) Mark Beardsley of Victorian Ilkeston was born on June 7th, 1897, the son of coalminer Philip and Margaret (nee Curley). The father was another son of Mark 2 who was thus the grandfather of Mark 10.

11  We might add to our list Mark Lewis Beardsley, born in 1882 to coalminer George Wake Beardsley and Mary (nee Columbine). We have already come across the father who was the illegitimate son of Maria Beardsley and newspaper proprietor John Wombell. The mother was a cousin of Adeline Wells (nee Columbine).