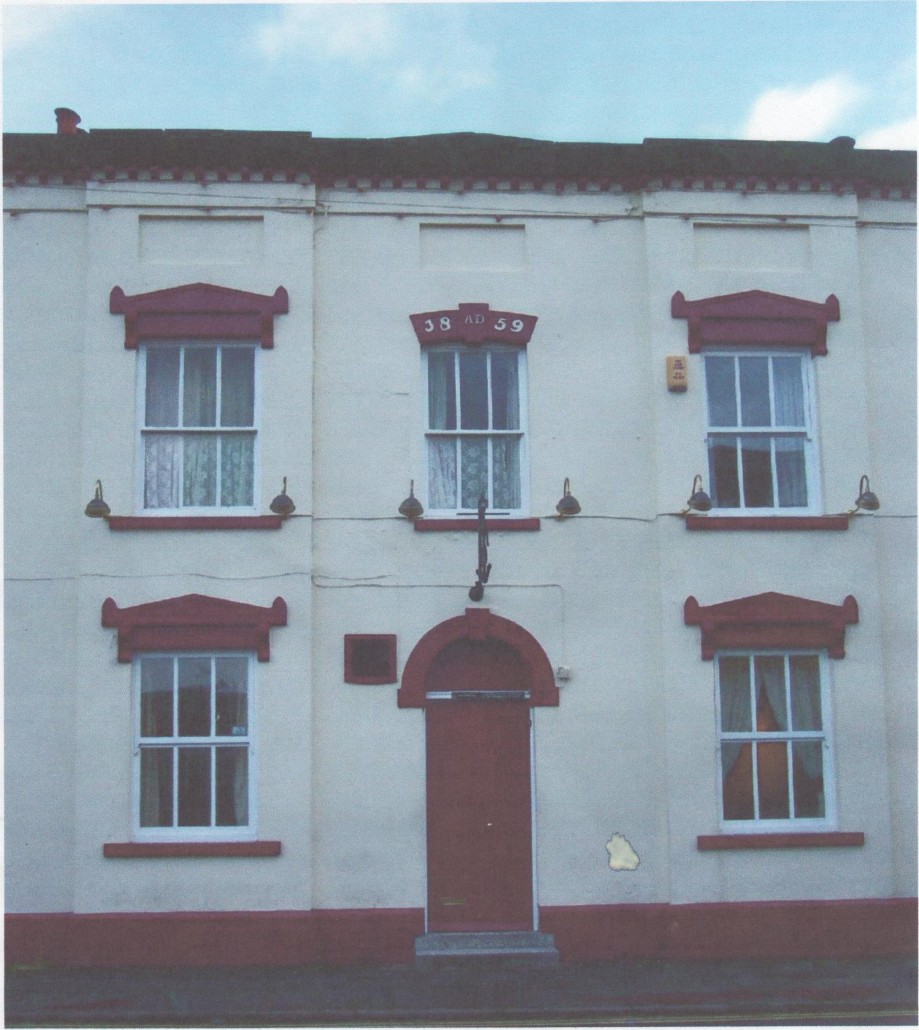 The Anchor Inn, Market Street, was built as a private house for Mr. H. H. Sugg. He had two sons.

The Inn faced Weaver Row, on the other side of Market Street, and to its north side – to its left as you view it in the photograph – was the Cricket Ground extending to St. Mary’s graveyard, on the south side of the church.

Son of iron founder William Nathaniel and Mary (nee Fone), Hubert Henri Sugg, solicitor’s articled clerk, was born in Exeter about 1833 and for some years worked in that city as clerk to William Davey, oil and colour merchant.

In 1858 Hubert Henri married Ellen (nee Howe), widow of Sandy Mudford, in Sheffield and moved to Ilkeston about 1860 when he was described as a ‘law student‘.

Their first child, Emily Mary, was born before the move, but two sons, Walter and Frank Howe, were born in Ilkeston. Two Ilkeston-born daughters, Ellen Florence and Flora, died as infants, and in the mid-1860’s the family returned to Yorkshire.

The 1861 census shows the family at Market Street living close to Thomas Merry, between the Market Tavern and the Harrow Inn. Hubert Henri served as managing clerk to — and in Ilkeston represented — solicitor Michael Jessop of Crich.

In May 1863 Hubert Henri appeared at the County Police Court in Derby in a case where he was in the dock, accused of fraudulently obtaining £23 10s.
It was claimed that he had sold two cows for that sum to farmer Charles Young of Sandiacre — unfortunately the bovine pair did not belong to him. The animals were the property of his client, Shipley farmer Thomas Green, who had not given permission for their sale. Consequently farmer Thomas had ‘retrieved’ his cows two days later.
Either Hubert Henri was guilty of fraud or Thomas was guilty of theft.
After legal arguments the charge against the farmer was dropped but the solicitor was bailed to be tried at Derby Assizes in August. At this subsequent appearance of Hubert Henri no evidence was offered against him and it was clear to the judge that the accused had not acted with felonious intent. He was thus freed ‘without the slightest stain upon his character for integrity’.

In 1864 Hubert Henri and family left Ilkeston for Sheffield when he succeeded to the practice of solicitor Charles E. Broadbent of Figtree Lane in that city — though he retained offices at Wilton House in Wilton Street.

A lot of his subsequent work in ‘the steel city’ was to represent the trade unions and their members in disputes, both civil and criminal.
At the Sheffield Police Court in June 1868 he assisted in defending 11 members of the Operative Stonemasons’ Society accused of conspiring to prevent a builder, James Powell, from carrying on his business, by using threats and intimidation against those who were willing to work for the builder.
At the close of the case and just before the bench was about to consider its verdict, Hubert Henri was seen to be examining books brought into court by the prosecution. When the presiding magistrate, the Mayor John Webster, began to instruct him to cease, Hubert Henri threw the books across the table. This prompted the Mayor to a rebuke.

The Mayor: “If you conduct yourself in that way, Mr. Sugg, I shall consider it my duty to commit you”. HH: “I am astonished”. The Mayor: “And I am astonished at you. Your conduct is most disgraceful, not only on this but on every other occasion. HH: “Whatever my conduct is, it could not do me any credit when the Mayor is on the bench” … … and his parting shot was “It’s a great shame that a solicitor in practice (the Mayor was then a solicitor) should be on the bench at all. It is quite against the Constitution, and it’s quite time it is altogether stopped”.

And in April 1870 at the same court – but thankfully not the same magistrate — he was involved in a similar case, when he crossed swords with magistrate Thomas William Rodgers who had interrupted Hubert with the observation that the latter’s cross-examination of a witness had proceeded far enough.
Hubert protested against this intervention and questioned the magistrate’s judgement. The ‘conversation’ continued.

Magistrate: I will not allow you to address me in that tone. HH: I am speaking in the interest of my client, and claim to be allowed the privileges usually accorded to advocates. Magistrate: (warmly) I say you must not address the Court in such a manner. HH: And I most indignantly protest against the action of the Bench. This matter becomes almost a personal one with me, and I say it is monstrous that an advocate should be answerable to a magistrate for the very tone in which he utters his remarks upon a case. Magistrate: I say you must not speak to me in such a tone; you must treat the bench respectfully. Unless you do so you must retire from the room. HH: If you think I am exceeding my duty to my client, and you have power to order me from the room, do so by all means: but I doubt very much whether you have the power. Magistrate: Perhaps I do not have power to order you from the room now that the case has resolved itself into an information where the Bench has summary jurisdiction, but if the charge had been the original one of highway robbery, I should have had the power. You cannot fail to see, Mr. Sugg, that there should be something like order in the conducting of the proceedings of a court of justice. HH: If I, in the interests of the defendants, consider that any cross-examination I have made is pertinent and necessary for their defence, I must ask to be allowed to make that cross-examination without let or hindrance.

HH then proceeded without any further interruption.

In the summer of 1868 Hubert Henri was called back to Ilkeston, to appear at the County Court, both as defendant and as plaintiff.

Aaron Aldred of the Queen’s Head was chasing him for alleged interest on a loan which the landlord had made to the solicitor, but in court Hubert Henri successfully argued that the sum had been paid.
And in the same court he sued Robert Marshall of the White Hart Inn in Heanor for an outstanding debt of £6… and another successful outcome for the solicitor.
And in the same court he sued Bath Street boot and shoemaker John Chadwick for alleged work that he had done for the latter… but ultimately which he could not prove.

In November 1870 Hubert Henri was elected to represent the Brightside ward of the Town Council, but his health was not good. He suffered from asthma and heart problems and died at his home in Burngreave Road on September 28th 1871, aged 38.

In the 1880’s and 1890’s son Frank Howe Sugg was a fine first-class cricketer, an accomplished batsman but excelling as a fielder with a very safe pair of hands. He played an unremarkable one season for Yorkshire in 1883, then three seasons for Derbyshire before 13 seasons for Lancashire where he qualified by residence.
In 1884 he played at Derby for his native county against the Australians when he scored 52 runs in the first innings, almost half of his team’s total. (He was out for a duck in the second innings).
In 1888 he again faced the ‘Colonial Team’, this time for England.
For Lancashire he scored over 10,000 runs, including 15 centuries, his highest score being 220 against Gloucestershire in 1896.
In 1890 he was one of Wisden’s Cricketers of the Year.
He also played in the football sides of Sheffield Wednesday, Derby County, Burnley and Bolton Wanderers, captaining the first three.
Frank was also an accomplished long distance swimmer, a record-breaking cricket ball thrower, played amateur billiards to a high standard, once reaching the final of the Liverpool Amateur Billiards Championship, won prizes for bowls, rifle-shooting and putting the shot, and fame as a weight-lifter.

Like his younger brother, Walter Sugg was educated at Sheffield Grammar School and was a multi-sport talent.
Also a very able cricketer, from 1881 to 1902 he playing one match for Yorkshire and the rest of his career for Derbyshire where he made his first appearance in 1884.
He was a fine billiards player, a professional footballer and scratch golfer.

Though both sons were trained as a solicitor’s clerk, life after professional cricket involved them co-operatively operating sports shops in the Liverpool area whilst for about a dozen years they issued Sugg’s Cricket Annual.
As they worked together so did they die together –almost!
Walter died at Dore in Yorkshire on May 21 1933 (his birthday) and Walter died at Waterloo, Liverpool eight days later.

There is excellent further information on the Sugg family in Sheffield — including photos!! — at ….. www.chrishobbs.com