After tailor Thomas Wass, Adeline takes us to see ……

“the private house of Mrs Kitty Beardsley and then the next shop was called ‘London House’, kept by Mrs. Beardsley. This was the leading millinery and drapery establishment in Ilkeston.

“She also had a grocery business.”

This was at 97 Bath Street in 1871 when the houses in Ilkeston were finally numbered.

Mrs. Kitty Beardsley was the wife of grocer/baker/draper John Beardsley of Bath Street and was born Catherine Skeavington in 1804. She was the daughter of Robert (one-time innkeeper of the White Lion at the top of Nottingham Road) and Elizabeth (nee Garton) in 1804.

Her husband John Beardsley, born about 1798, was the second son of coalminer Solomon and Mary (nee Gregory). John had also been a collier but in the 1830s traded as a baker and grocer.

The advert on the right is taken from the Pioneer of December 10th 1857.

The Beardsley couple had at least 12 children, though Adeline only recalls “three sons and four daughters”. She lists the seven children as ….

Solomon whom we shall meet later as we walk down the west side of Bath Street.

Amos who was married to Sarah Birch, daughter of South Street joiner John and Sarah (nee Wagstaff) in 1863.

Solomon, Amos and Albert were bakers. The latter two ‘baker boys’ moved away from Bath Street.
In the early 1880’s Albert settled in Stafford with his family but by the end of the century was at South Shields, trading as a dairyman.
Also in the 1880’s Amos and family decamped from Ilkeston and found their way to Leicester via Bolton.
However the family returned to Ilkeston to live at Rothsay Villas, Stanton Road. We shall meet Amos again in South Street, close to Weaver Row.

Mary became Mrs. S. Lowe, of South St.
The oldest child was Mary, born in 1821 and married to Samuel Lowe in 1847; we meet them in South Street.

Betsy (became) Mrs. Bamford (or so Adeline writes — but we all make mistakes)
Elizabeth (Betsy) Beardsley, born in 1826, married engine smith John Balmforth in 1855. The latter was born near Ripley and in that town the couple spent the first years of their marriage. In the 1870’s the lure of Bath Street brought them to Ilkeston where John traded as a grocer/confectioner. He died in that street in 1886 and wife Betsy spent the last years of her life at Ripley Cottage in Gregory Street. She died there in 1896.
Both are buried in Ilkeston General Cemetery.

Maria (became) Mrs. Flint.
Born in 1838, Maria married Harry Walter Flint, 12 years her junior, in 1877 and for several years the couple kept the grocer’s shop at 97 Bath Street after the death of Maria’s father. Their son, Harry John Beardsley Flint died in 1891, aged 11, at the family home of 34 King Street, and after Maria’s death in 1895, husband Harry moved to Derby.
Born in Berkhamstead, Hertfordshire in 1850, Harry Walter was by trade a bricklayer/builder like his father Henry, and it was he who was chosen to build the fire brigade cart sheds in Pimlico for the Local Board.

Kate (became) Mrs. Brand.
Youngest daughter Catherine was born in 1845, married Harry Morley Brand in 1875 and lived at Arden Villas in Gregory Street. She died in 1897.

However, I believe that there were at least four other children.

I believe that William left Ilkeston in the 1840’s to live in Stafford where he worked as a shoemaker, married Jane Tittensor there in 1859, and then was innkeeper at the Queen’s Head in Broad Eye, where he died in 1883.

His younger brother Thomas worked with his father in Bath Street as a baker until he followed his brother to Stafford in the 1860’s. There he married Elizabeth Ferns in 1866 and lived his life in Back Walls North where he traded as a shoemaker/finisher and died there in 1898.

Catherine (Kitty), the mother, died in Bath Street in December 1869 after a lingering illness.
Her husband John died there in October 1875, aged 77.

Below is a copy of the last will of John Beardsley, dated April 27th 1870, made a few months after the death of his wife, when all his children, except daughters Maria and Catherine, were married and had left home. The two unmarried daughters remained in the Bath Street home with John, and were his main beneficiaries. 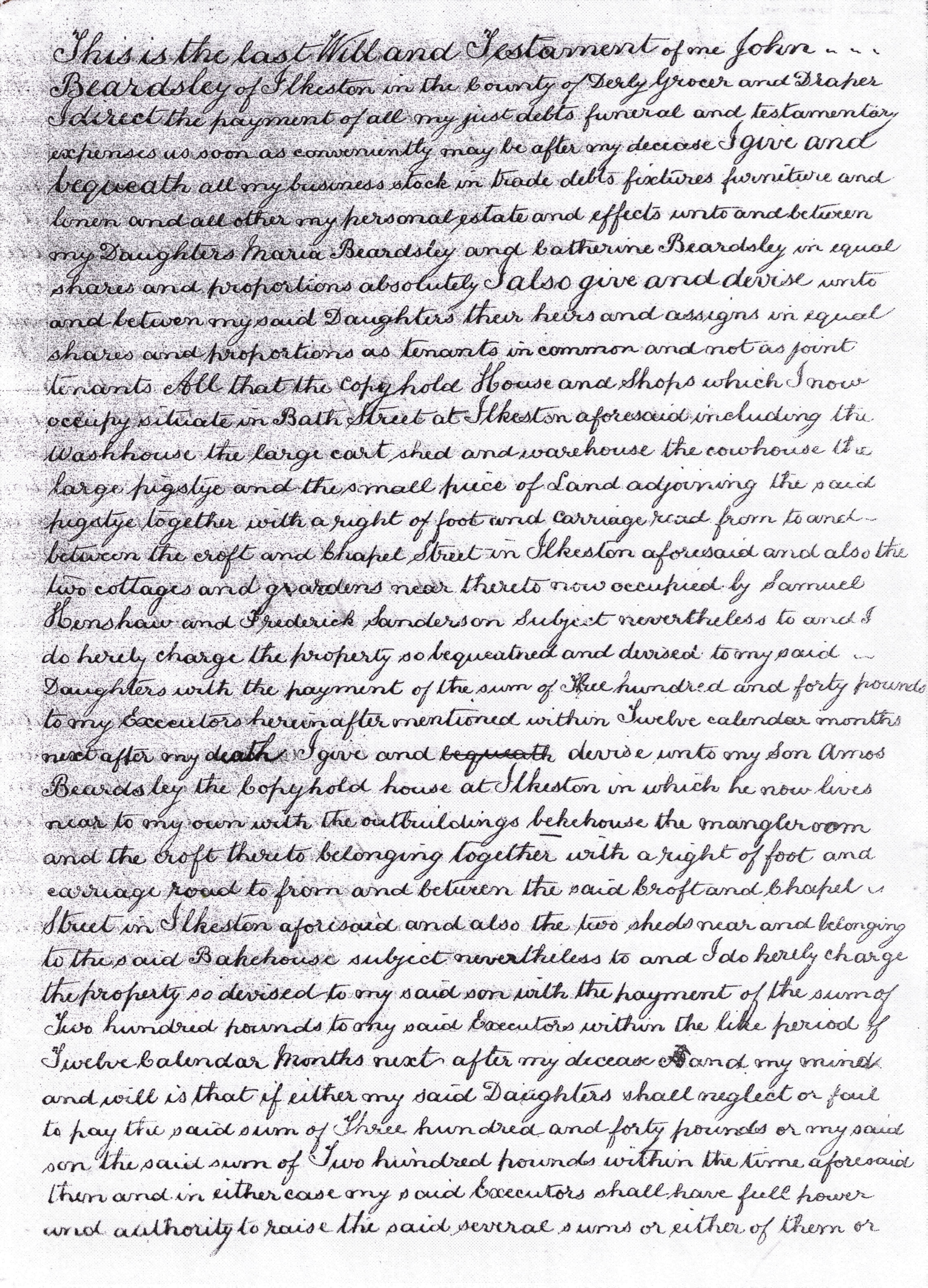 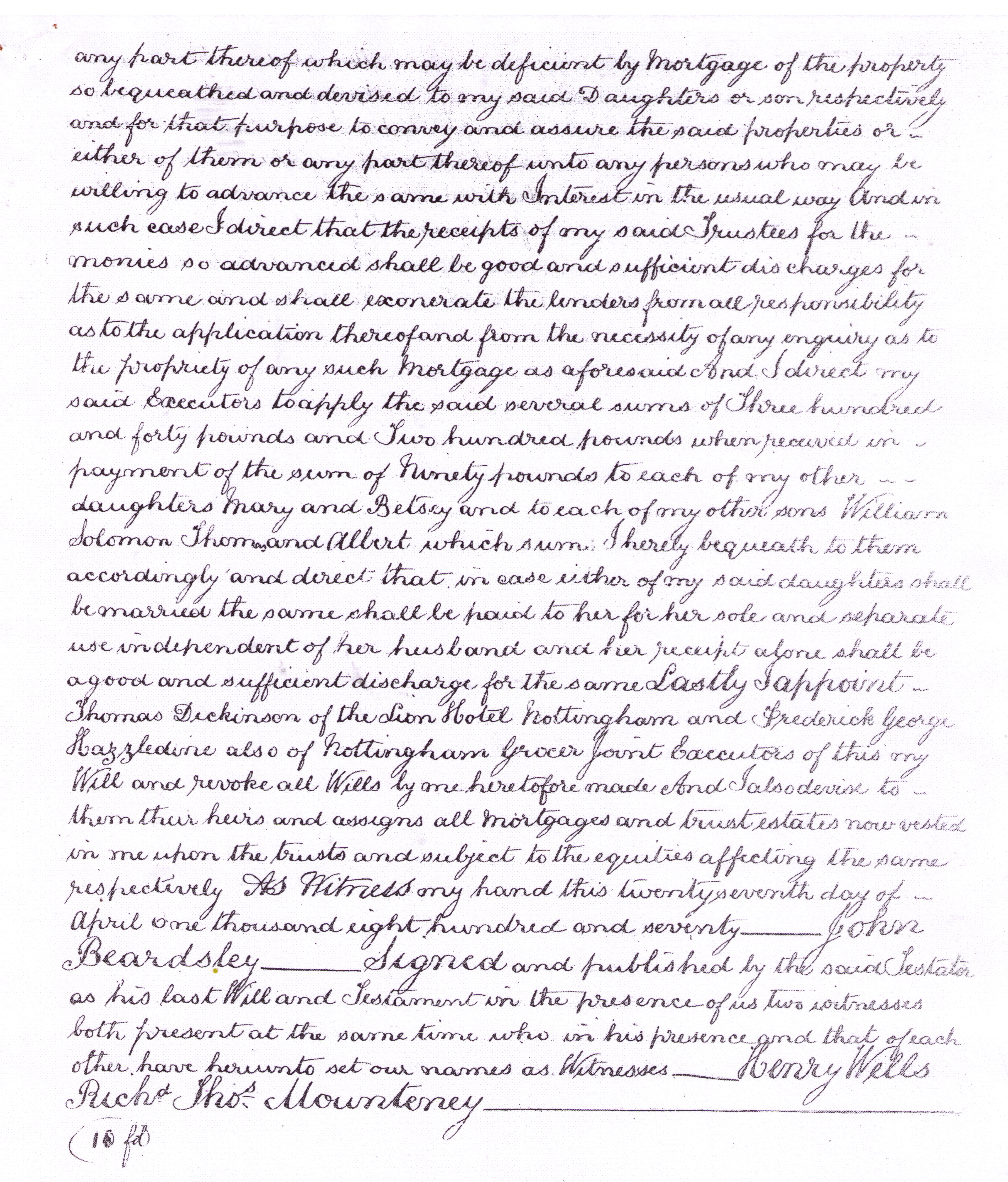 In the Ilkeston News and South Derbyshire Advertiser of April 1857, John Beardsley was thanking his customers for their patronage during the 25 years that he had been in business, and was making them aware of the fine range of goods to be found at The London House General Drapery, Mantle, Bonnet and Millinery Establishment, adding that “Mrs Beardsley confidently invites an early inspection of this stock, and intending purchasers will bear in mind that nowhere can they buy any articles in the Trade of better quality, or at a lower price…”

So let us pause here to reflect upon the Ilkeston News.