And after the grandparents …

Elizabeth Haywood’s oldest sibling was Sarah Ann Richards, born on March 13th 1881 in North Street. She married colliery carpenter John William Henson in 1908. And here she is with grandson David Henson, born in 1949, the son of Bernard and Mary. 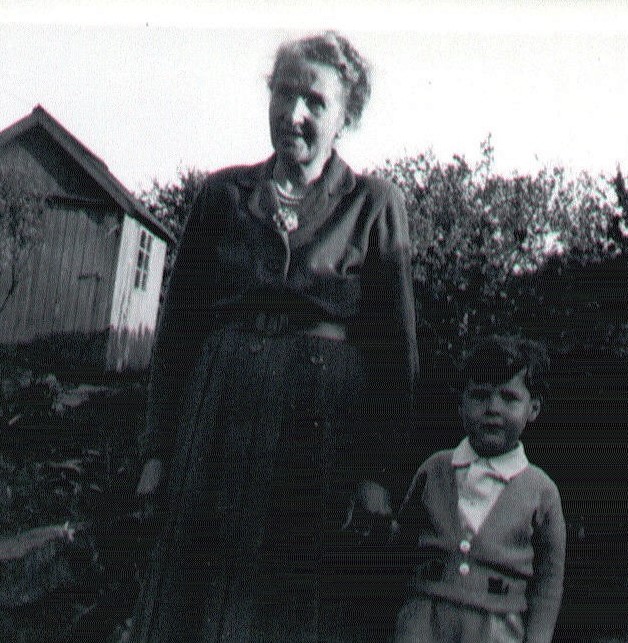 I now come to the lady christened Sally.
The best hearted girl in anyone’s alley
If you wish to beat her, first try it on
For you’ll get a rough welcome from her hubby John

Their family so happy just numbers two
Gwen can talk but Bernard says boo.
The fire they protect by the use of a range
And all was A1 till the child wanted a change.

At Eastwood this quartette in glory reside
The best little home for anyone to abide
They sit tête-à-tête when the children’s retired
And tell one another what they have acquired.

Born on May 25 1886 at 7 Station Road, Uncle Meynell Richards also appears in the Family Review written by Bernard Shaw …

I now come to that oldest boy named Menal
The best of company in anyone’s kennel
He sets all their feelings and wit aglow
By his tales of Birmingham and others we know.

He was remembered by Dorothy.
Meynall lived at 22 Flamstead Rd with his family, and then he moved to Bulwell, to take up the position of shopkeeper if you like, because his wife’s parents* kept the shop…….I don’t know if they gave it up or died……..so Meynell took over the business. Our grandparents (John and Annie Eliza Richards) then moved into 22 Flamstead Road.
One of Meynall’s daughters, Ivy Richards, married Frederick Bishop. He was an America soldier based at Wollaton Park during the Second World War….an American GI…..and later they went to live in Cleveland, Ohio. Later they moved to Florida where she died, just a few years ago (ie about 2000)
Another of his daughters, Eva, married Sidney King, and they had two children, Pauline and Murray. Murray went to Cambridge University and later became a vet

Meynell’s wife was Annie Sale whom he married in 1910. While Meynell’s father-in-law William Sale worked as a colliery clerk, his mother-in-law Mary Ann (nee Deverill) kept the book store, newsagent and stationer’s shop in Quarry Road in Bulwell.
Meynell was also recalled in a conversation I had with Ken Jolly in 2003.

Meynell went to keep a newsagent’s and contectioner’s shop on Commercial Road (number 8) in Bulwell, and he had a daughter and a family there. In the 1950’s, 1960’s and 1970’s we were working all around Nottingham, both this side and the other side, going out towards Melton Mowbray, wholesaling sweets and cigarettes, …….. I used to call at Meynell’s shop… I forget his daughter’s name but she married Morris/Maurice *(?)…

Meynell was a big Brough Superior enthusiast …George Brough made motorcycles at Bulwell and Meynell was his friend…he always bought his motorbikes from George, direct. 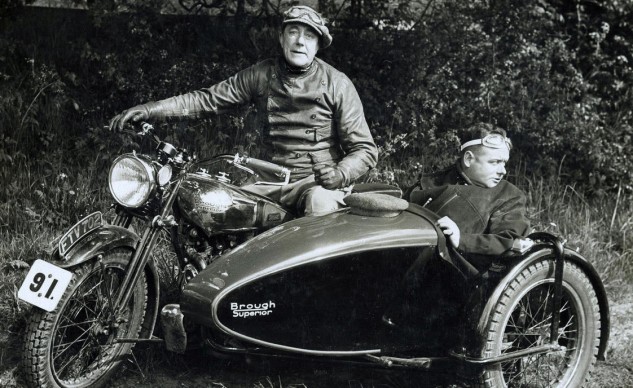 Meynell’s son-in-law, Maurice, used to come to Jolly’s shop on Bath Street, to collect sweets and cigarettes in this Brough Superior….I think that must have been after Meynell died (in 1972).

Uncle William Richards, born on March 6th 1891 at 8 Station Road, married twice .. to Maggie May Beardsley in 1916, and then, after her death in 1936, to widow Lily Blanche Skinner (nee Edwards) in 1938 at the Register Office in Ilkeston.

He wasn’t left out of Bernard Shaw’s Family Review … written in 1921 and so referring to William’s first wife.

The next for inspection is that boy Billy
Whose ways sometimes I think are silly
As for letting his wife get on to him so
I’d tell her to pack and prepare to go.

My advice to him is to get on a footing
And to leave to his wife the job of dusting
Whilst admitting his kindness and paternal thought
His wife takes him for a slave she has bought.

To him responsibility for his child* will rest
So take up your stand and do your best
You have all the sympathy God can bestow
I want to see you happy and both so-so.

*The child mentioned was Gladys May Richards born on August 6th 1917. She married Ernest Stanley Robinson in 1940.

Our Uncle Bill died at the Workhouse at Belper….not really a workhouse then, although it used to be ……it was a hospital where they used to take old folk. (Babington Hospital) He was living at Gordon St and his wife (Lily Blanche) couldn’t look after him so he was admitted at Belper. It was a terrible place.
When he married Lily, we (ie Marie and family) left 12 Flamstead Rd and went to live in Bill’s house at 35 Gordon St….we stopped there a year and hated it so much we moved back to 16 Flamstead Rd. So when he was married to his first wife he was living at 35 Gordon St. When he married his second wife, Lily, he moved to 30 Gordon St, which was her home and that is where he died. 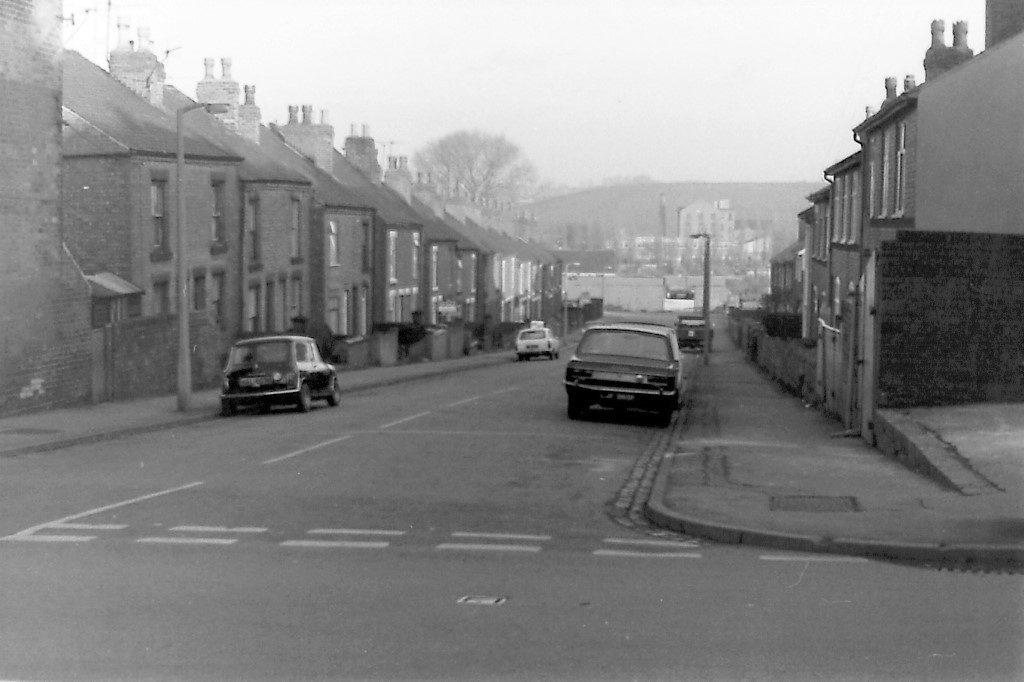 Looking down Gordon Street from Alvenor Street, with Flamstead Road on the right, a continuation of Alvenor Street. You can see the ‘Ashes’ playing fields in the distance, once used by Chaucer Schools as their ‘sports grounds’

William was buried with his parents (in Park Cemetery). While he was at Belper his wife often went to visit her son in Hereford……she had two sons* from her previous marriage….she absolutely abandonned William. And when he died there was room in the grave so he went in there with his parents.

*The two sons of  Lily Blanche’s first marriage were Ernest George Skinner, born in 1919, and Leslie born in 1922. Their father was Ernest Skinner who died in 1928.

William was buried just a few days after his death on August 8th 1952 by his first cousin once removed, Charles Leonard Johnson … the total cost of the funeral was £35 16s 6d 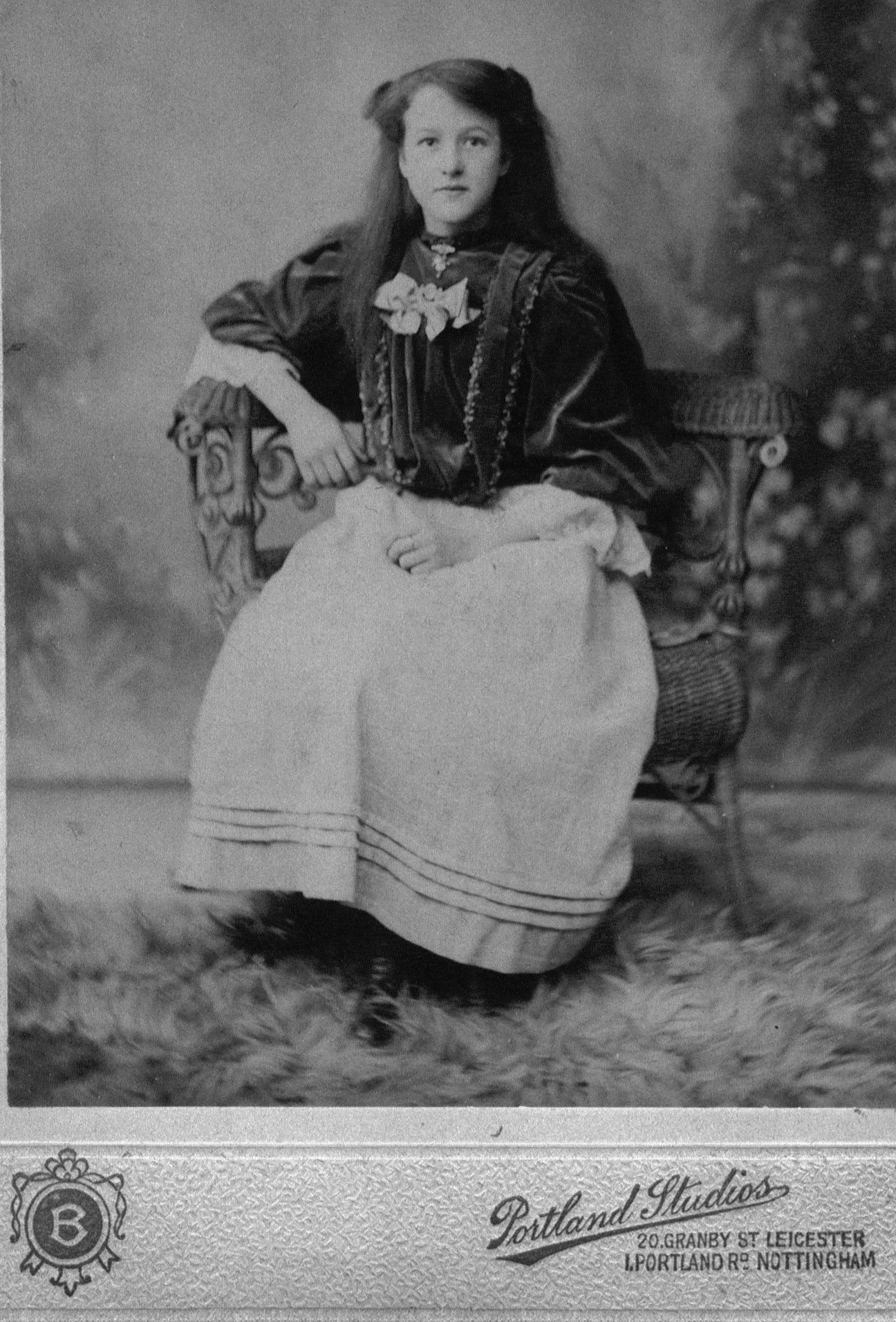 The original was taken at Portland Studios, at 1 Portland Rd, Nottingham

Lilian married Frederick William Hawley in 1923. Ken Jolly recalled that “he kept the farm at Cossall, when my dad came back into Ilkeston. and they lived on my dad’s farm, from 1930….then Fred Hawley went to keep a farm at Strelley.”  The Cossall farm was Church Farm, while the one at Strelley was Old Moor Farm.

From Bernard Shaw’s Family Review, dated Feb 15 1921
Lily comes next with the greatest of hearts
She is a good cook by the taste of her tarts.
To Fred I am sure that she is most worthy
I think they’ll be married before she’s thirty

She is a girl every day and week alike
But I have never seen her ride a bike
She is an expert at making jelly
And crocheting with her friend Nellie. 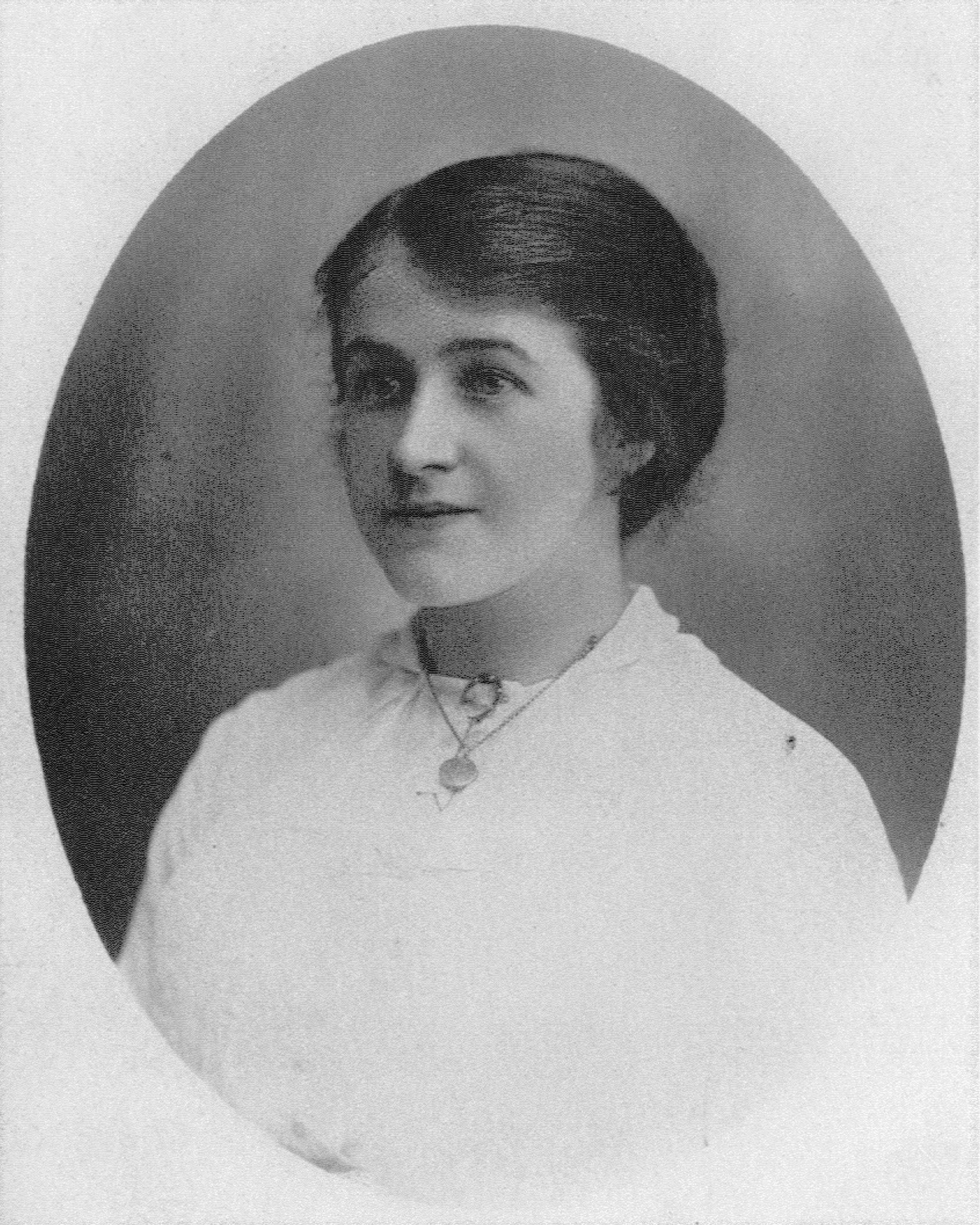 Lilian just before her marriage in 1923 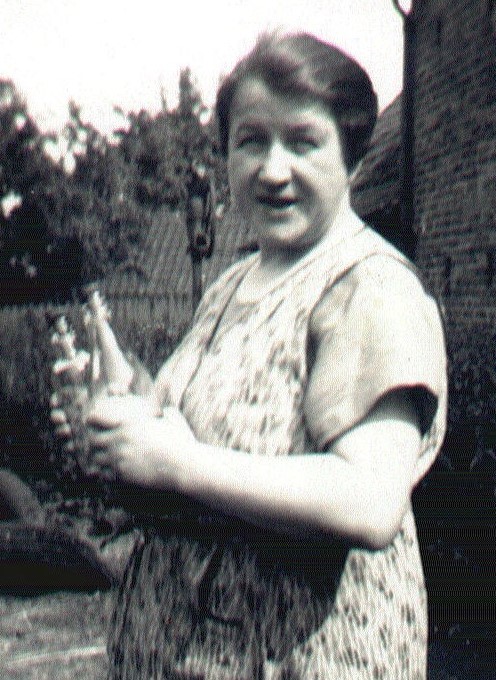 … and on the farm at Strelley ?

Both Lilian and Fred died while living at 3 Alvenor Street, in 1971 and 1977 respectively.

John (right with sister Elizabeth) is also remembered in Bernard Shaw’s Family Review, 1921
Jack is the boy whom I next review
To tell you of him will be nothing new
We all know his home he doesn’t shirk
And we’re very sorry he’s out of work.

But for all his quality of cheerfulness
He’s a perfect gentleman for manliness
He’s the pride and joy of his mother’s soul
When he’s putting in the cellar that load of coal.

*the Labour was the employment exchange where unemployed men went to seek work.
**the Kings was a cinema on Bath St, where the Abion Shopping Centre now stands. 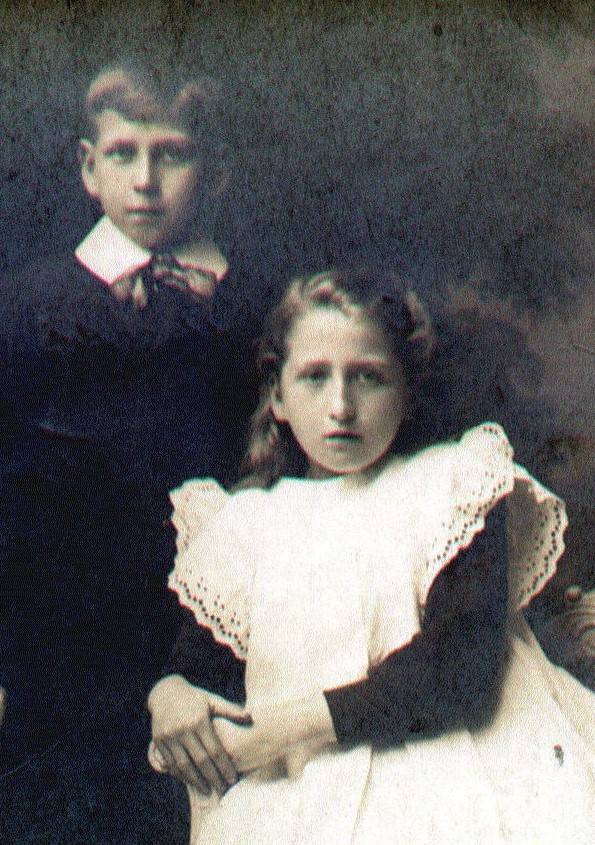 There used to be a shop called Seamans, where Ray Gambles shop is, on Pelham Street, and that’s where a lot of photos were taken.

He served in this country and never went abroad.

After this photo (right) he went later into the Marines. 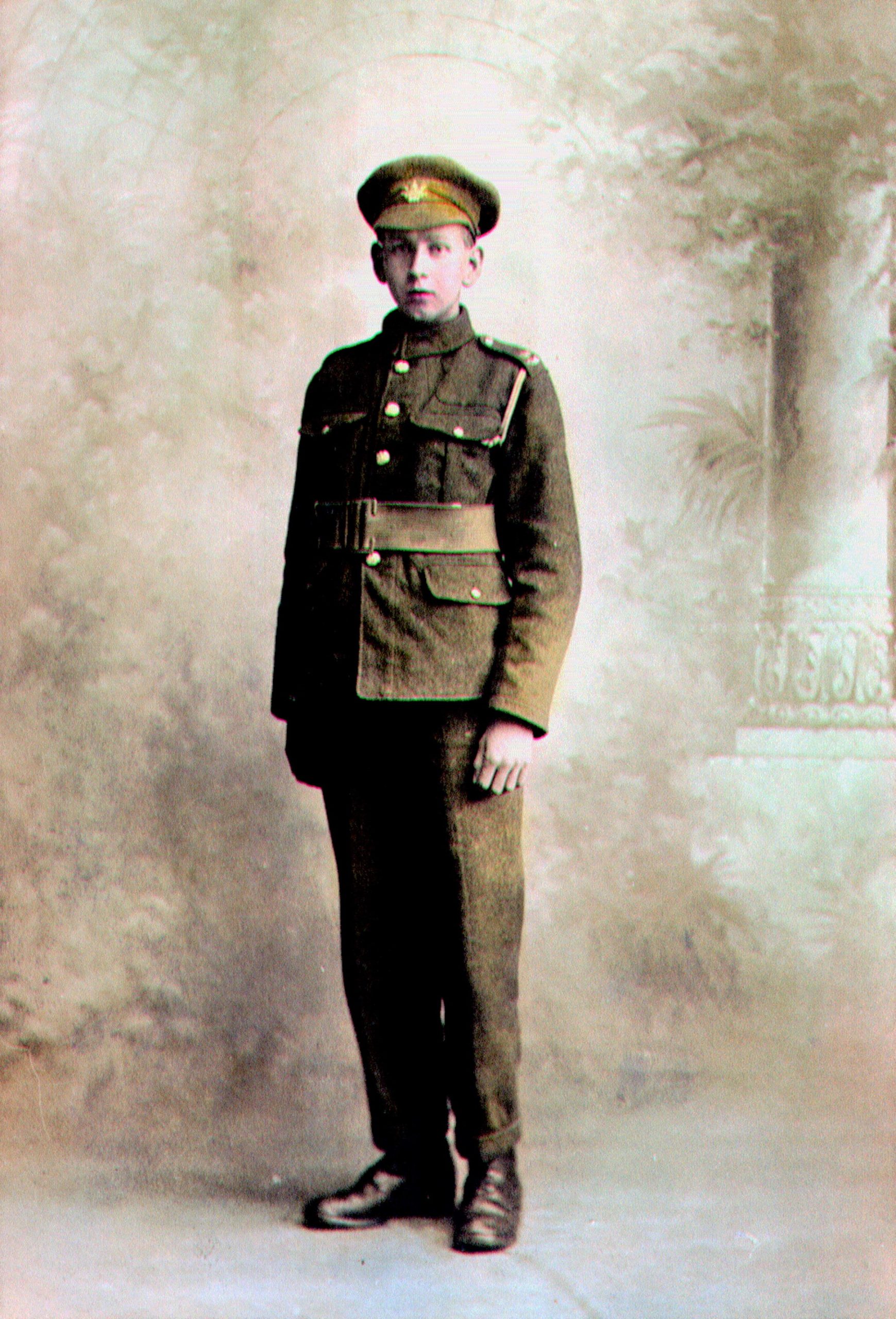 He was remembered by Colin Henshaw, his first cousin once removed, when I spoke to Colin in 2001.
I remember Jack Richards … he got his milk from the Jolly farm at Cossall, and he had his own milk round. I think his wife’s name was Ethel and I remember I rode on his horse and cart a few times, part way to the farm…that would be about the 1930’s…he would be doing that for 20 or 30 years.

This was confirmed by Ken Jolly (2003)
Jack Richards took on my dad’s milk round business…his name might have been John but we all called him Jack. He lived on what must have been Flamstead Road, about the middle.

Dorothy’s cousin Marie Elizabeth Richards, the daughter of John and Ethel, recalled her father in 2003
He was quite well off at this time. John and Elizabeth were the youngest children and the other children were married, with children of their own. Grandad had a good job, colliery deputy, with a bit of money….my dad John, always said that they lived well.

My dad used to work at Beardsley’s factory on Cotmanhay Road…I don’t know what he made. But there was always short-time. So he used to go and work for Jollys, who had the shop on Bath Street, to get a bit of extra money. He used to make ice-cream and he used to sell toffees on Ilkeston Market on a Saturday. And it came that Arthur (William Arthur Jolly?) had the milk round and he wanted to sell it…so my dad bought it. He delivered milk until he retired….he would be 67 or 68 before he retired…he was very lucky really with his health. He died when he was 75 and that was such a shame. I’d just had the children then, and did he love them !!
His milk round was local…he got his milk from the farm at Cossall. He delivered it by horse and cart. I have a lovely photo of me as a baby, sitting on the horse. Then he bought a van and uncle Jack (Haywood) taught him to drive. He kept changing his vans, updating them. He kept his van at the bottom of Albion Place….to the left of Ball’s Factory, there used to be Billy Wheatley’s Dairy, which is now Safeway car park, and he used to park it there. Go up Granby Gardens, which is now Gresley Rd, and you are there. All that from number 16 Flamstead Rd !!
[Dorothy added that he said ” Dorothy, if everyone would have paid up, I would have been a millionaire ” And he would have had a lot more because many people didn’t pay up.] 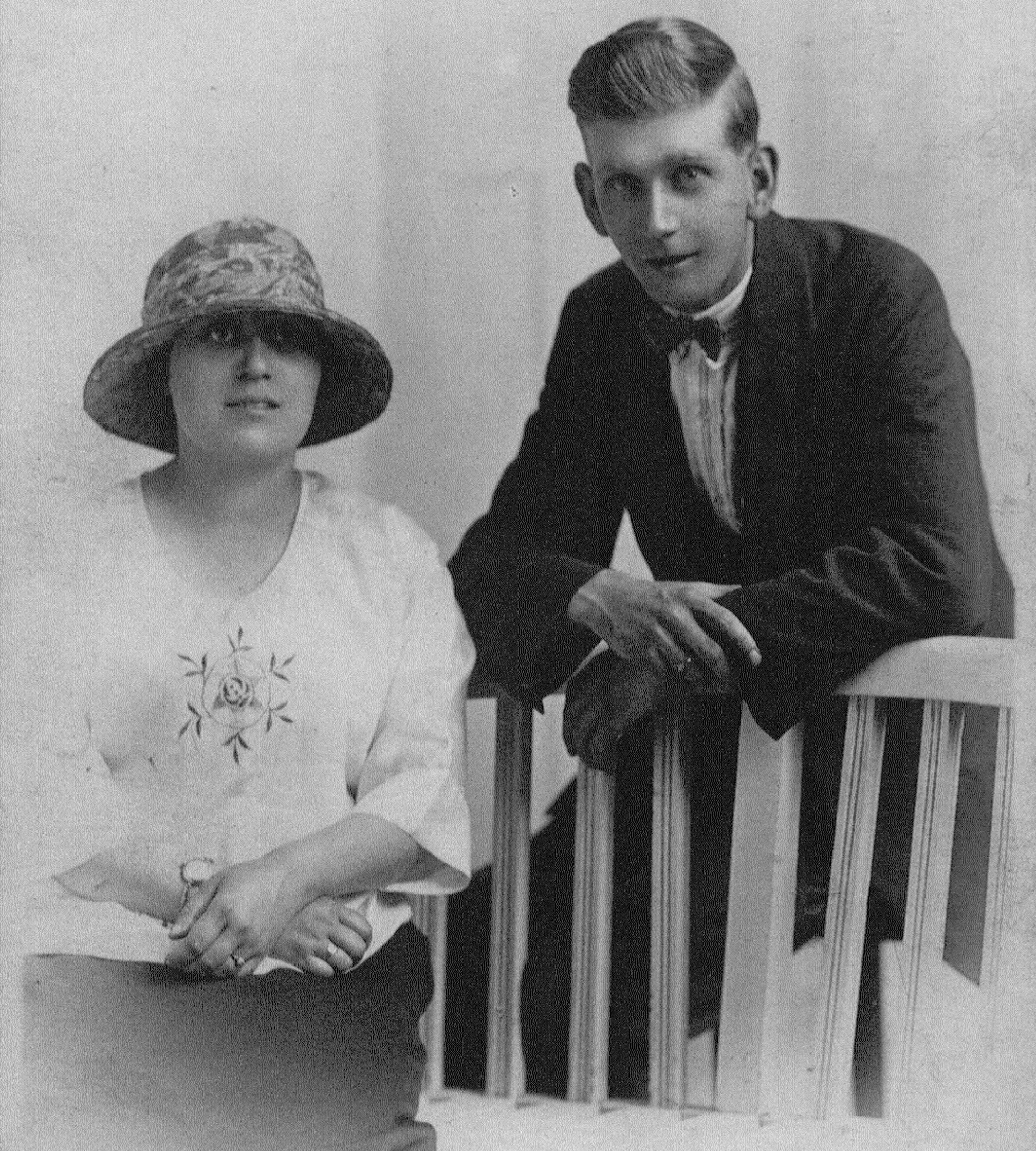 John and Ethel on their engagement, taken possibly at Blackpool. 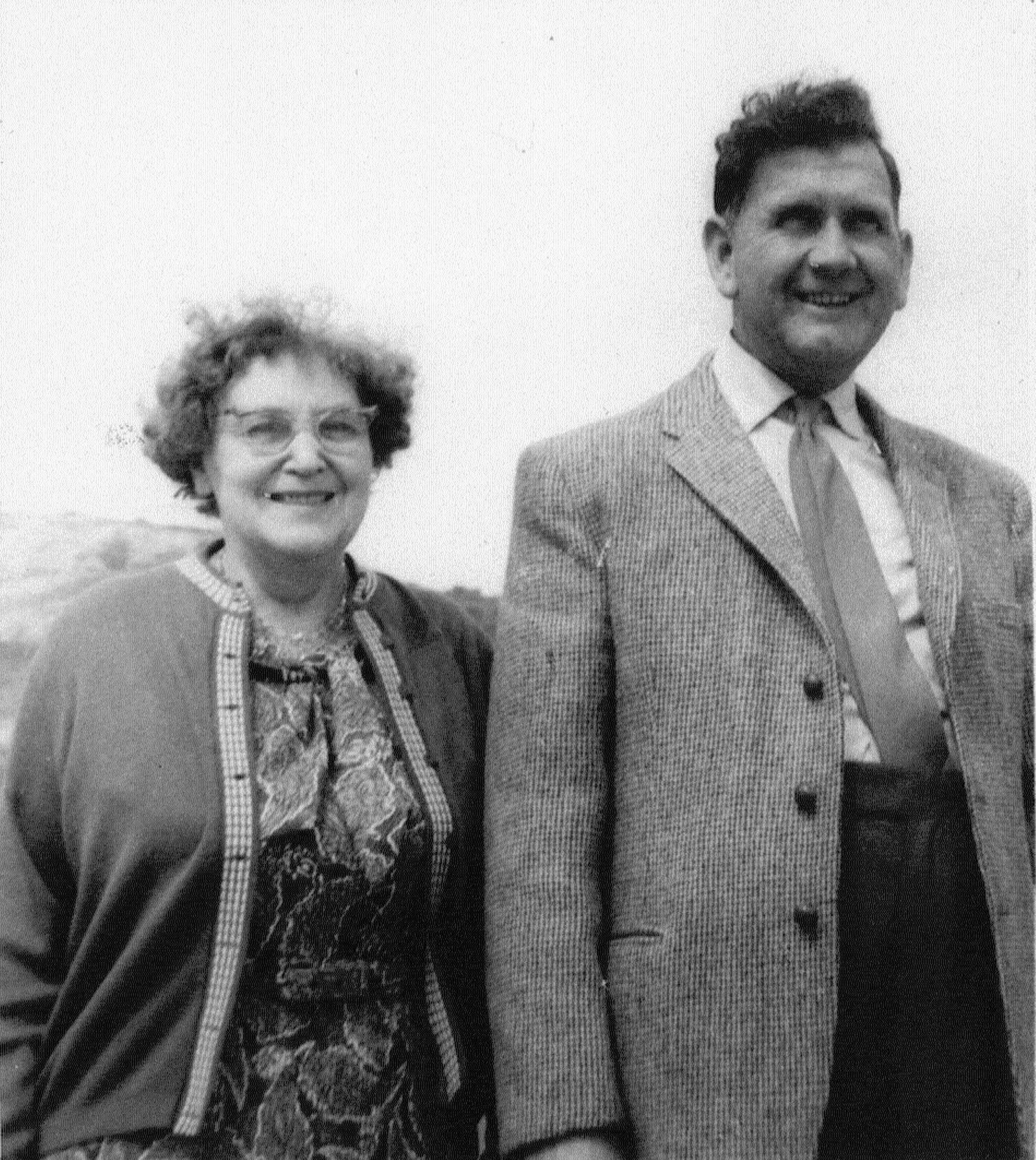 Ethel was born at Stanton by Dale … I can show you the exact house … it went up for sale not long ago for £200, 000. It’s right in the middle of Stanton by Dale, looking at the cross there, ever such an old house. Her grandfather was the gamekeeper for Hooley (Is this Ernest Terah Hooley of Risley Hall?).  Her mother was 17 or 18 when she had Ethel…she had to get married you see. She had a terrible life ….. she never knew what it was like to have a birthday present or a christmas box… they were so poor. So her parents got married and lived with my grandfather’s parents, the Figgs, at Stanton by Dale. I think they had lived in Stanton by Dale a long time.
By the time she was about 20 or 21, her mother had three little children. Her father was a miner. (The house is opposite the school and Post Office, the left hand one of the pair of semi-detached.) 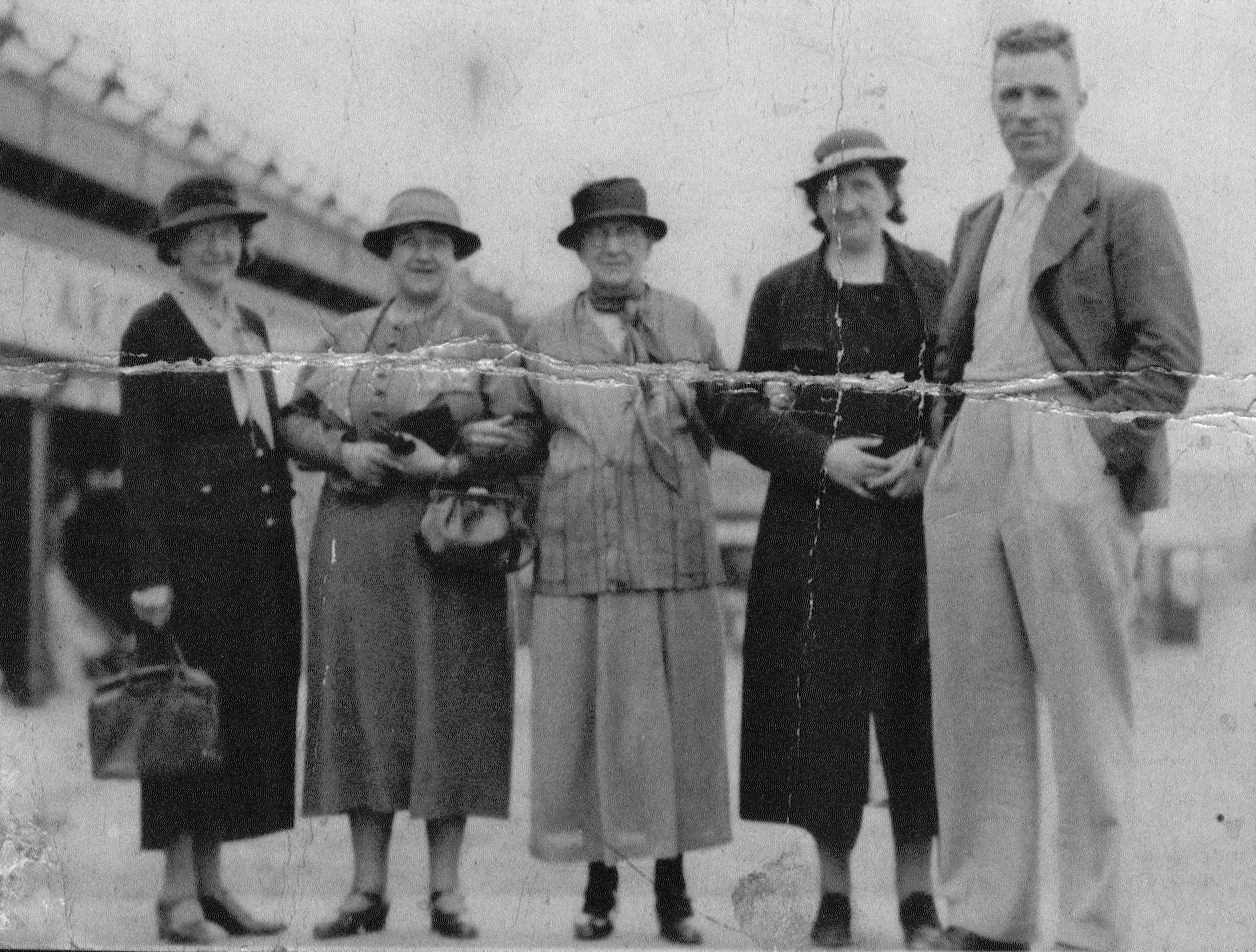