In April 1880, as was customary each year, six members of the Local Board were ‘retired’ and elections were held to find their replacements, although ‘retiring’ members could stand for re-election — as all of them did on this occasion.
In this year there was much greater interest in the election than usual because of the Board’s recent activities and the growing parish debt. (The Local Board vs the Gas Company)

Twenty candidates were nominated for the six vacant seats, six of them running together on a joint ticket of ‘economy and retrenchment’. The Pioneer campaigned hard for the election of these candidates, who were Samuel Streets Potter, farmer of The Park; victualler John Trueman of the Durham Ox; Isaac Attenborough, maltster of Market Street; Ezekiel Hugh Phillips, colliery manager of Awsworth Road; builder James Goddard of East Street; and William Rose, auctioneer of Nottingham Road.
At the subsequent poll all of them were elected onto the Board by a large majority. The pioneer (April 15th 1880) was thus very pleased to print a full list of the results presumably now looking forward to a period of supressed rate increases and ‘careful’ local financial management. 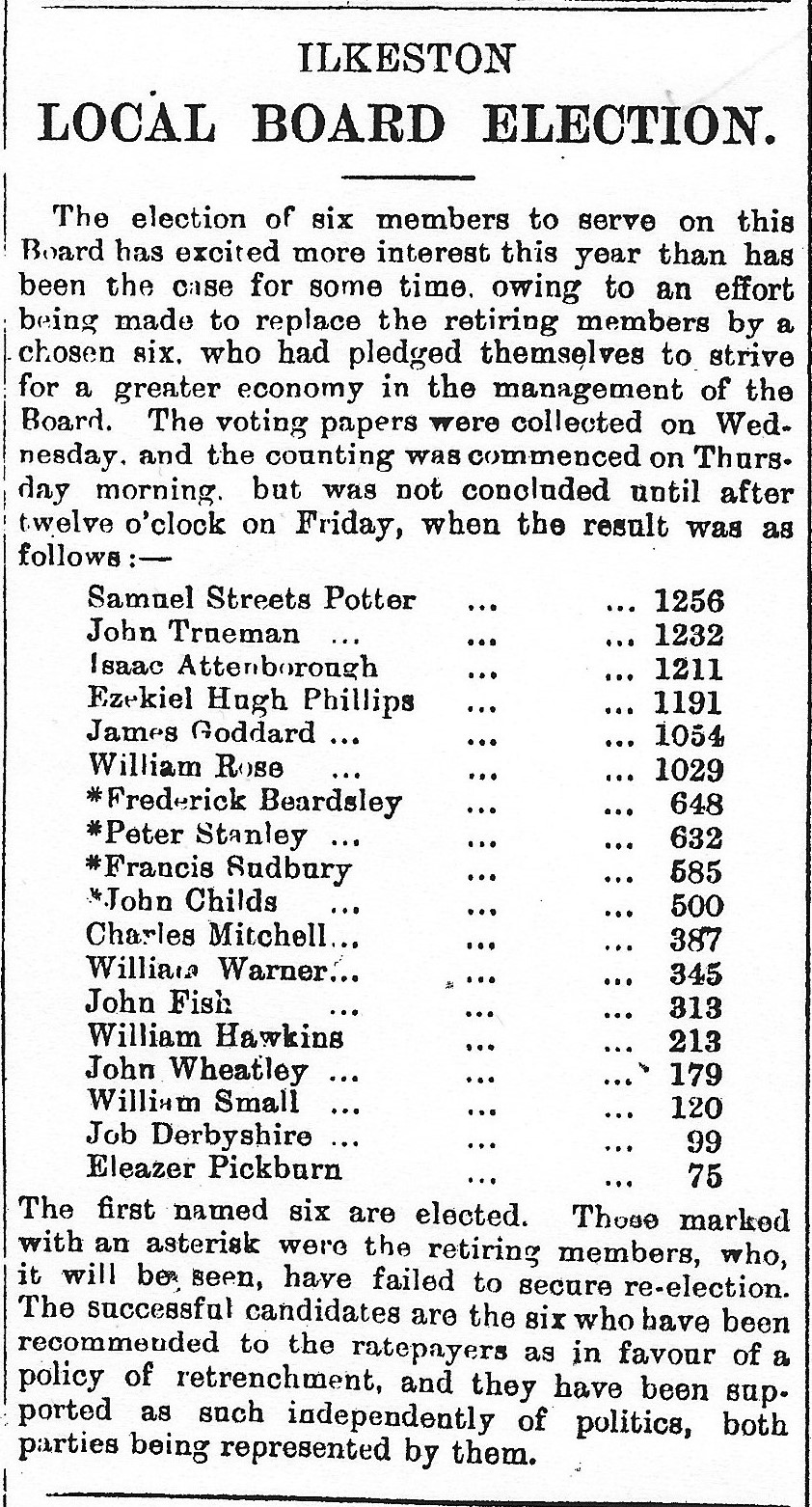 These figures, quoted in the Pioneer, don’t quite add up but nevertheless do show a healthy surplus … the integrity of which was severely questioned by the same newspaper a week later.
And despite this ‘profit’ the pursuit of ‘economy and retrenchment’ continued into the following year.

In January 1881, in a letter to the Pioneer, Matthew Hobson proposed the formation of a Ratepayers’ Association and in March – because of the alleged ‘extravagance’ ‘indiscriminate borrowing’ and ‘unfair dealing’ of the Board — the Association was formed, members of which were to encourage greater economy in parish affairs.

The purpose at its first noisy and sometimes acrimonious meeting was to decide on a list of suitable ‘retrenchment’ candidates for the forthcoming Local Board elections.
The chosen six were builder William Warner of South Street, agent Bartholomew Wilson of Nottingham Road, needlemaker Walter Tatham of Market Street, grocer Samuel Richards of Cotmanhay Road, Cotmanhay coalminer John Sisson and gentleman Matthew Hobson of Field House.

Less than a week later an open public meeting was called at which existing members of the Board spoke to defend vigorously their record in office. Herbert Tatham argued that the purchase of the gas and waterworks would prove beneficial to the town, and that profit from these works would exceed interest on the money borrowed by the Board to purchase them.

Once more the Pioneer was electioneering for the ’retrenchment’ candidates and in its efforts, tried to whip up a scandal over the salaries paid to the Local Board’s Officers.
The newspaper was outraged !!
The Clerk to the Board was paid £20 pa in 1869 but by 1877 that salary had risen to £70.  A 350% pay rise in eight years !!
Wright Lissett was the clerk at that time – not the newspaper’s most favourite official – and it was pointedly pointed out that he also drew a salary of £25 pa. as water-works manager and £80 pa. as gas-works superintendent.
And all three of his posts were only part-time, leaving scope for him to pursue his main occupation as auctioneer/farmer!!
And what of the Surveyor, Collector and Inspector of Nuisances?   That post was filled in 1875 by architect George Haslam at a salary of £120 pa. on the condition that he devoted all his time to these offices. However he soon found it impossible to conduct all three roles efficiently and so was relieved of his duties as Inspector of Nuisances but with no reduction in pay!! A new Inspector had to be appointed at a cost of £70 pa!!
Then Mr. Haslam applied to the Board to be allowed to restart his practice as an architect!! And the Board agreed!!
And two years later he was appointed collector of water rents !!   With an additional salary of £25 pa !!

To the Pioneer this all looked like ‘jobs for the boys’!!
The newspaper was clear that the members of the ‘Family Party’ who still controlled the Local Board were wasting public funds. They needed their wings clipping!!

And during the election process someone had spotted some jiggery pokery (alleged) and wrote to the Pioneer, a letter which the newspaper was only too happy to print …. Fox News and Donald Trump come to mind ? 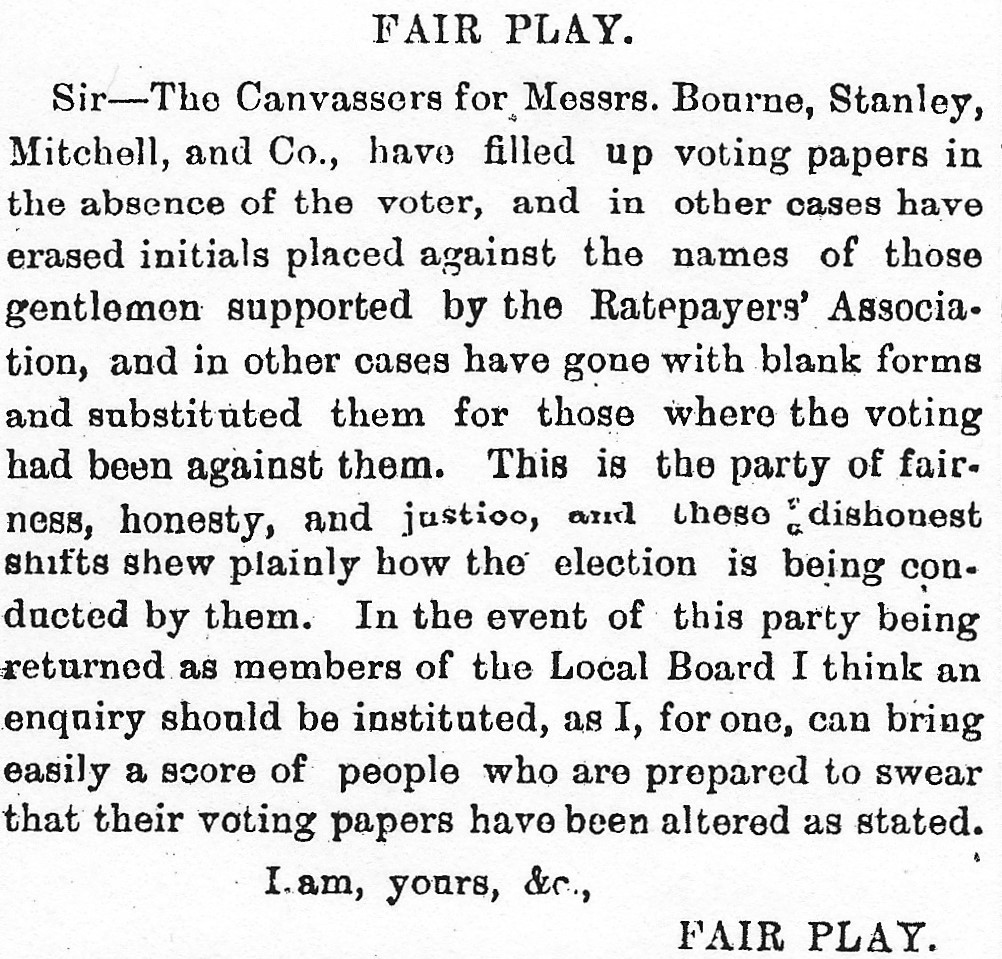 From the Ilkeston Pioneer April 4th 1881

In the subsequent election five of the six Ratepayers’ Association nominees were returned, William Warner being the unsuccessful one … but only just!
What it also meant was that those members of the Board now supporting ‘reform, economy, retrenchment and efficiency’ were in a significant majority. 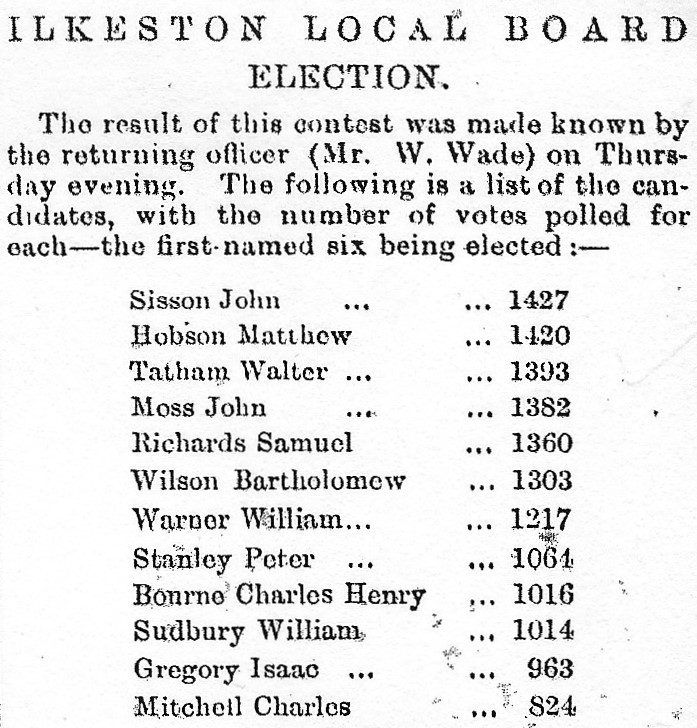 John Sisson was the candidate who headed the poll, securing the largest number of votes that had been given to any candidate since the formation of the Local Board.
And it was John Sisson who took it upon himself to be ‘Wing Clipper in Chief’.
Shortly after his election, in June 1881, he proposed that the salary of the Surveyor, George Haslam, be reduced and that his duties be ‘revised’ – a euphemism for ‘increased’. Furthermore he should give up his ‘private practice’ and devote all his time and energies to parish duties.

George had almost had enough. He had been associated with the Board for five-and-a-half years, during which time, because of the growth of the town and its population, his duties had become more and more onerous. He was now responsible for the collection of very large sums of money, the oversight of a large number of Board employees, and the payment of their wages. To him it was clear that some Board members were simply motivated by spite and were out to get him … and ‘they’ were the majority of the Ratepayers’ Association representatives.
At the Board meeting George spoke out vehemently against the proposed restrictions but it was in vain – by a substantial majority the wishes of John Sisson were approved.

By July 1881 Wright Lissett was presenting another balance sheet to show that the Local Board had borrowed a total of £29,000 to buy and improve the gasworks. Of that total, £665 had been repaid. It had so far made a net profit of almost £875 for the Board. Referring to the figures he concluded;
“There is nothing imaginary or chimerical about them, and if carefully and fairly studied it will go to show that Ilkeston is not quite in such a state of insolvency as some persons, who take a morbid view of matters would have the world believe”.
Who could he have in mind?!

He continued; “Such reports, which are frequently made, both verbally and written, have a tendency to injure a town very materially, as well with regard to the value of real property, as to the trade and business of the place. While people outside Ilkeston are led to think it is more in debt, more highly rated, worse drained and sewered, supplied badly with water, and infinitely more so with gas than any other town, they will never come here to expend their money in erecting factories and other places of business….. if  Ilkeston were sold up tomorrow, there would be plenty to pay twenty shillings in the pound, and a good balance over”.
So there!!

But the Pioneer was still not satisfied. It continued to berate the Local Board over the street lighting.
It was November 1881 and the newspaper wanted the lamps lit every Saturday and Sunday night, regardless of moonlight. On a cloudy night it was difficult to walk around the town safely.
“The principal streets are infested with hundreds of men, young and old, as well as girls, in a state of semi-intoxication, and who are too ready to insult and obstruct any one they meet on whom they may please to vent their folly. A little more vigilance is required on the part of the police and the Local Board authorities”.
Excessive alcohol consumption is not a modern phenomenon. The mid to late Victorian age saw the zenith of the Temperance movement as many people feared that England’s greatness would be seriously threatened by a tide of drunkenness.

In March 1882 the manager of Ilkeston Gas Works Frederick Chilton Humphries gave a lecture to the Ilkeston Church Mutual Improvement Society in which he described the electric light, illustrating the various kinds of electric machines which had recently been invented with diagrams on a blackboard. He did not think any of the lights would supersede gas illumination, particularly for domestic purposes.
But he would say that, wouldn’t he?!
In September of the same year the Local Board was discussing the recent Electric Lighting Act (1882). The Board had received notices from two electric light companies that they were considering applying for licences to supply the town with electricity. The Local Board could pre-empt both these companies by applying for and obtaining a similar licence, but the process was expensive, always a powerful argument for the Board to do nothing!
Board member William Wade thought that they should continue to supply good gas at as cheap a rate as possible, and thought that electric light would never supersede gas as an illuminating agency.
The Ilkeston Advertiser was not so sure of this however, though it did hope that “whatever illuminating agent is employed (in future) will be supplied less fitfully than the gas is supplied at present in our streets.
“That we should have, during particular phases of the moon, to trust at nights entirely to moonshine, which may at any moment be obscured by clouds, is a disgrace to the parish and a great inconvenience to the inhabitants”.

In September of 1882 the Local Board confirmed that in future all new streets would have to pay for their own gas lamps. That was the law.

In February 1898 a special meeting of the Ilkeston Town Council voted unanimously to oppose the General Power Distributing Act 1898 by which it was proposed to generate and supply electricity to a large area including Ilkeston. It was argued that the proposal was ‘prejudicial to the best interests of the Ilkeston Corporation’.
In November 1898 the same Town Council applied to the Board of Trade for authorisation to provide electric tramways and the supply of electricity in the borough at an estimated cost of £80,000.

In the Pioneer of January 1891 and briefly looking back over the previous 50 years, Edwin Trueman wrote ….
“The acquisition of the gasworks will ever remain a testimonial to the business foresight of those who governed Ilkeston before the days of incorporation”. (that is, the members of the Local Board).