The Prince of Wales

“At the side of the old Baptist Chapel, at the back of the shops, was a yard with cottages in it.” This was Trueman’s – or Truman’s — Court.

“(The next shops were very seldom let.)
The Prince of Wales opposite the U. M. Free Church, South Street, had for landlord Mr. Godber.
The public house and shops as now. The tenants were very fickle and did not stay long in them.” 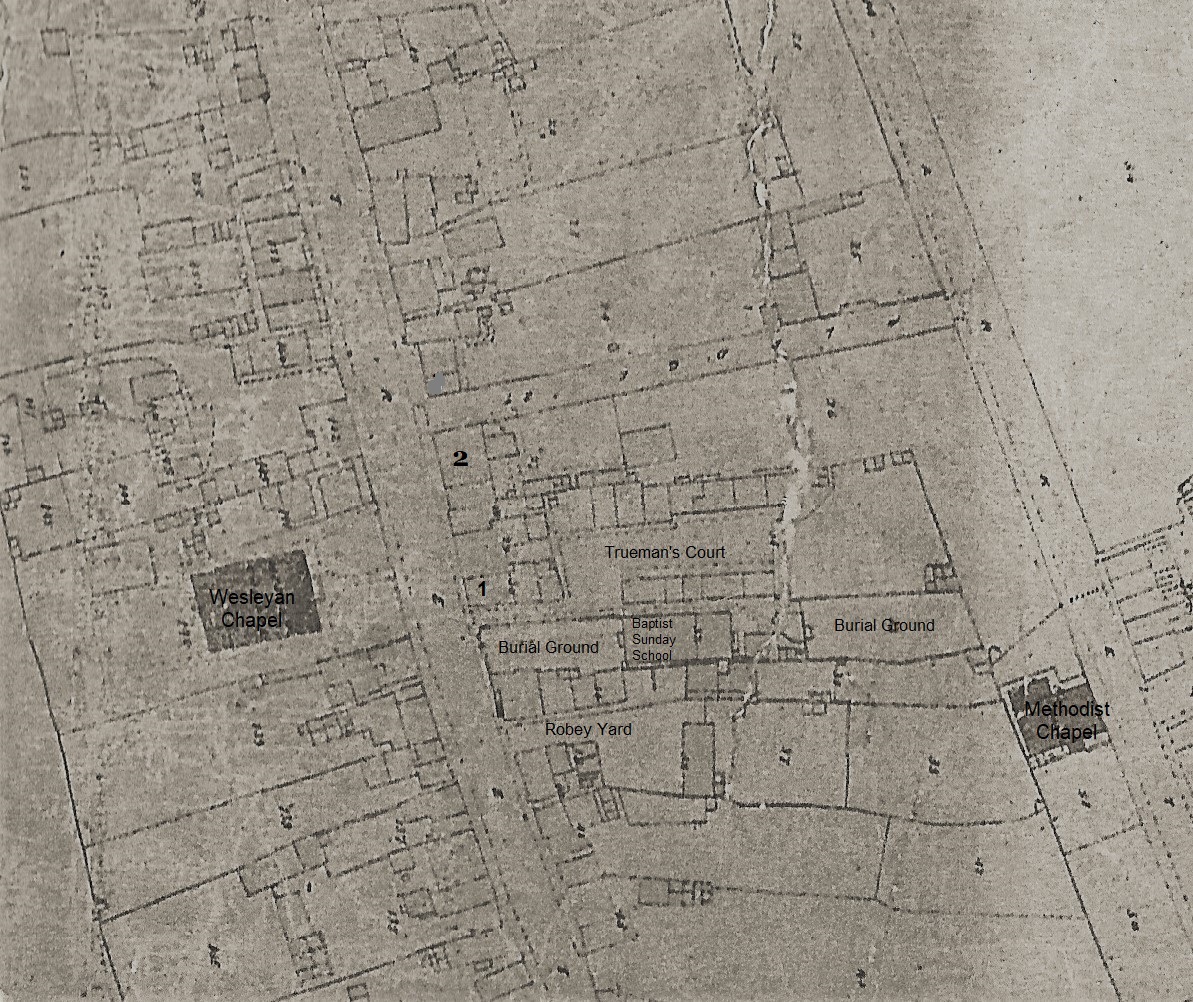 Here is a map of this part of South Street (which you can see running from top left to bottom middle), adapted from the Local Board Map of 1866.
Number 1 on the map is the Jolly Anglers’ Arms, later the Prince of Wales (and the Poacher in 2020).
Number 2 on the map is the premises of John Moss which we will shortly visit.

In May, throughout June and into July of 1861, the Jolly Anglers’ Arms in South Street, adjacent to the Baptist Chapel Yard and opposite the Wesley Chapel, was offered for let.
Then in July an auction at the Anglers’ Arms was held when William Thompson sold all of his brewing utensils — coppers, mash tub, cooler, running-off tubs, liquor spout, mash pale, hop sieve, thermometer, barrels, as well as household furniture seating, shop fixtures gas fittings etc. William and family were leaving town. 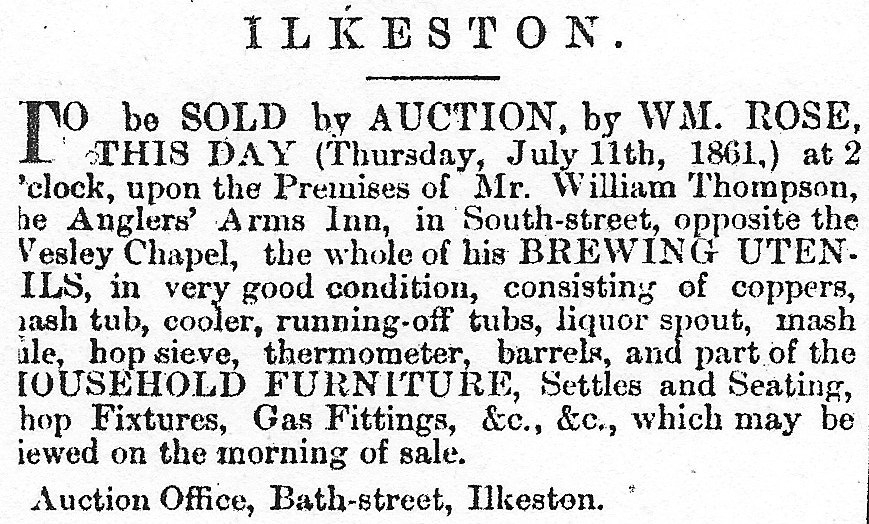 William’s main trade was as a rope and twine maker, and he may well have made fishing line too — hence the name of the inn?
Was this the time that his neighbour Edwin Godber took over the beerhouse – and renamed it  the Prince of Wales?

Edwin Godber was born at Barton under Needwood in Staffordshire in 1829, the son of gardener Matthew and Naomi (nee Butters).
The 1851 census finds him working as a gardener at Shipley Hall and on Christmas Day of that year he married Mary Ann Trueman of Mapperley, daughter of joiner and wheelwright Elijah and Ann.
The couple lived in South Street where Edwin kept a grocer’s shop, but still practised as a gardener there, at least into the late 1860‘s.

Edwin died in January 1871 and the census of that year records Mary Ann now as keeper of the beerhouse with son John Thomas as helper — the license was transferred in February 1871. Younger son Albert Edwin is also there but third son Arthur Matthew had died in September 1866, aged one year.

Mary Ann was still the beerhouse keeper when she married her second husband, Beeston-born joiner George Bark, in September 1873, and the couple stayed there until 1883 (at least?)

When up for sale in 1876 the premises were described as an old and well-accustomed beerhouse, having a bar, tap-room, parlour, good cellars, brew house, pantry, storerooms, four bedrooms, two attics, a back yard and appurtenances. 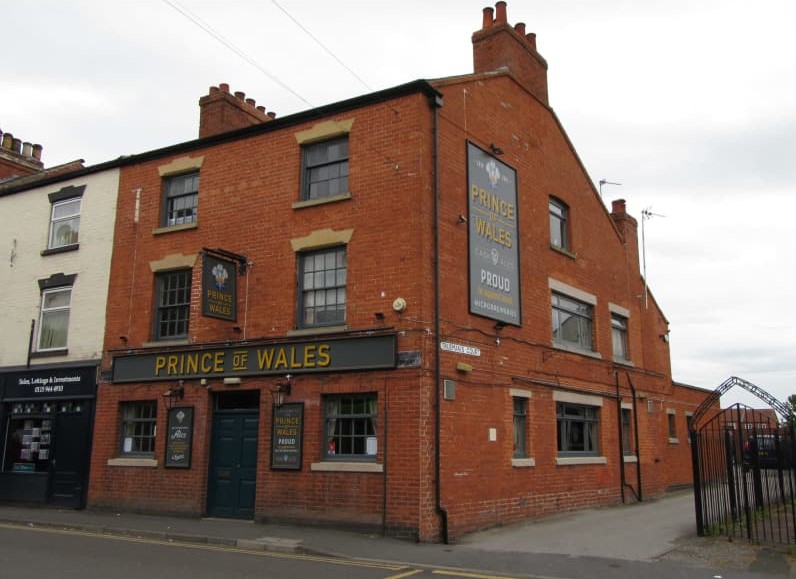 Prince of Wales at 69 South Street, and Trueman’s Court entrance to the left

At the same time as the beerhouse’s sale, 13 dwelling houses at its rear, in Trueman’s Court, were offered for sale. All properties were Copyhold of the Manor of Ilkeston.

In 1888 the beerhouse was occupied by Henry Bostock but in January 1889 the licence was transferred to Eli Barrett.

Accident Alert !!! April 16th 1889 ...... In this area lived John Wallis Argile, a tinman, his wife and family of very young children. One of them was Annie Mabel, aged 2, who was playing outside her house in South Street with a nurse girl, in the early evening. Along that street came the dray of Edward Lawrence, potato dealer, driven by a lad named Riley and which knocked the infant down as she ran out into its way. It then passed over her body, killing her instantly.

At the rear of the beerhouse was Trueman’s Court, an open yard on either side of which, north and south, was a total of about 13 households.
Earlier known as Baptist (Chapel) Yard, the area had a strong Irish representation from the 1850’s onwards and its name seems to have been derived from coalminer Samuel Trueman, born in 1825 to William and Mary (nee Webster). He lived all of his adult life here, initially with his widowed mother and then joined by Martha Farnsworth.
The couple had at least eight illegitimate children, registered as Farnsworth though several baptised as Trueman, before Samuel and Martha married in 1873.
Samuel died in 1900 at 6 Trueman’s Court, at the (registered) age of 68!!

By the time that their last child John was born in 1876, their eldest child Emma had given birth to at least seven illegitimate children, most (if not all) of them while living at Mount Row with Irish coalminer James Davis. 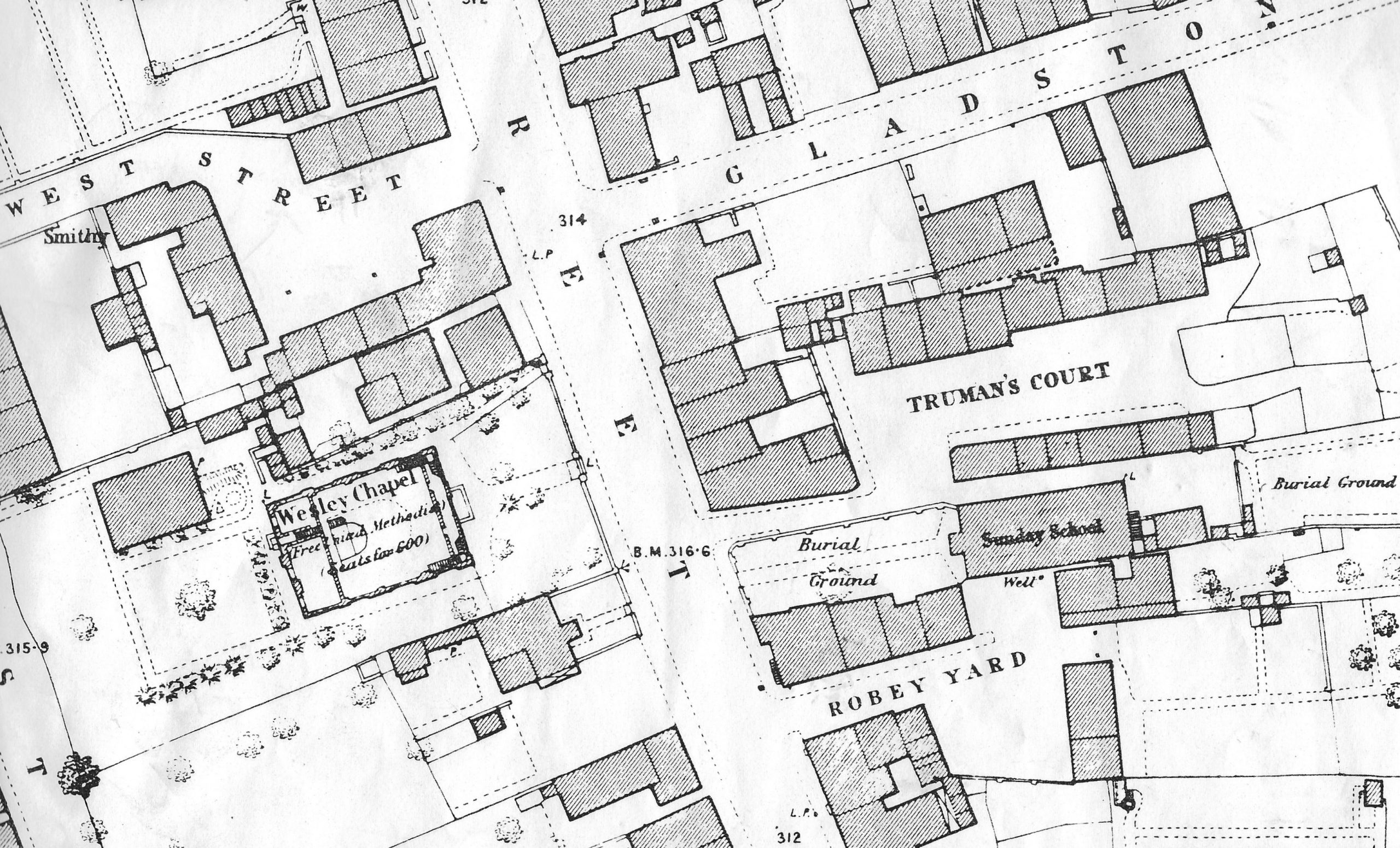 Here is the same area as that shown in the top map, but this time, about 1880. Notice that Pledge Street has changed its name to Gladstone Street

Post script; part of Truman’s Court (sic) exists today (September 2021). It consists of the two most westerly semi-detached cottages of the north side, on the 1881 map above.