In fact one of the Tilson line is buried in Ilkeston St Mary’s but her death was not registered at all, and she was estranged from her husband at the time of her death, which is quite suspicious. The posting of bmd in the old Ilkeston newspapers was a bit hit and miss in the years up to 1881, the years covered by your old Ilkeston website, and Ellen’s death was not listed in any of the Ilkeston newspapers. If it were not for the Ilkeston St Mary burial register, her death would have gone unnoticed. The relevant information relating to this mystery is listed below : –

Ilkeston Pioneer – Thursday 5th October 1865 (Page 4 Column 5)
ILKESTON PETTY SESSIONS (THURSDAY, September 28th before W. T Cox and M H M Mundy Esquires)
WIFE NEGLECT- John Tilson, miner, Ilkeston, was charged by William Dean, relieving officer, with leaving his wife chargeable to the parish.
It appeared that defendant, who resides with his mother at Pimlico, has been married for nearly two years, his wife being a daughter of Robert Lebeter, Ilkeston Common. – that a separation took place between them some eight months ago, the agreement being that the husband should allow the wife 2s 6d per week. – and that the payments had been made irregularly and ultimately stopped altogether.
It also appeared from the statement of Mrs Lebeter that Tilson had been in the habit of ill-treating his wife besides neglecting her, and accounted for his not supporting her by his spending his money at wakes and fairs. In answer to the charge, defendant said he had been short of work, or otherwise the payments would have been regularly made.
The magistrates informed defendant that they considered his case to be a very bad one, and that he would have to be imprisoned for one month.
Defendant begged to be allowed to get off by paying a fine, but the magistrates refused to grant his request.

Shortly after Ellen’s death John Tilson left the Ilkeston area and remarried to Charlotte Westerman in Featherstone Yorkshire, and remained in Yorkshire starting a family there.

I am just including one marriage below, which gives you an actual marriage date … the copy of the marriage entry, which looks like Westerman even if it should be Masterman. 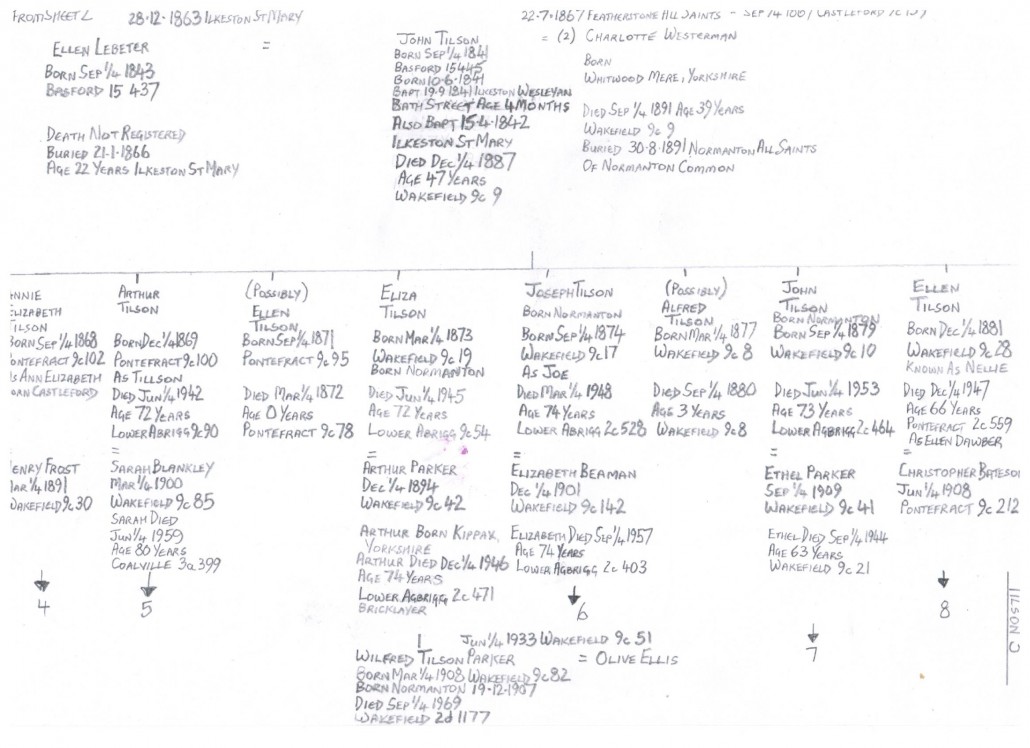 For information, John Tilson’s younger brother Herbert & their widowed mother Ann (nee Clower), also both moved from Ilkeston to the Castleford area of Yorkshire. Ann was the widow of John Tilson who was living in Club Row, Ilkeston in 1841, and who was buried 15thAugust 1848 at Cotmanhay.  They had married 24th May 1828 at Ilkeston St Mary. Ann Tilson died 1877 (Q2) aged 66 in the Wakefield Registration District.