William and Rachel Frost after 1881 (by Alan Smith)

In 1881, not only have the Frost’s have moved, but gone (by three years) are Mary Ann and Harriet; both of whom being were married less than three months apart in 1878, however, their moving on has had little impact on the size of their father’s and step-mother’s family, for William (50 and Furnace manager) and Rachel (46) still have nine of their ‘brood’ living at home; notice also that Rachel stipulates her birthplace as being Marlpool (Heanor).  Home at this time is No5 Lows Lane, Stanton by Dale; about half a mile from where they were living in 1871, so lets ‘take a peek’ behind the curtains of No5.

As interesting as all the information on the census is, I feel a special note has to be made regarding two of the children named above, these being Ruth (aged 6) and Catherine H (aged just 4 months), I say they are worthy of special note because by the end of the this year both Ruth and Catherine had died (see page 2 for details), this census being the only visible record of them ever having been part of the family.
Having found Ruth and Catherine on the census, I naturally wondered why there was no mention of them on the following census; especially with Catherine being so young, so a special search was undertaken to discover more about them.
Ruth
A search for Ruth confirmed her birth as being in 1875, and so it was that… following an ’inner feeling’ (got to follow those feelings!)… I conducted a search to see if she had in fact died; and sure enough this search confirmed her death in 1881 aged just six years old.
Catherine H
Catherine H Frost: now therein lies a story in its own right, for as I’ve written above, Catherine would only have been very young (10 years old) in 1891 and yet I could find no sign of her… nothing at all, no registration of birth, not even a registration of death.
Feeling somewhat puzzled by this lack of results, I revised the search to omit the first name from the search criteria and search purely for a Frost child, born 1880 in Stanton by Dale, revising the search in this way yielded two (I consider) important discoveries, the first being a registration of birth for a Kate Hannah Frost born in the 4th quarter of 1880 (GRO Ref: Shardlow 7b 447), the second being a registration of death for said Kate Hannah Frost in the 3rd quarter of 1881 (GRO Ref: Shardlow 7b 269); making Kate less than a year old when she died.
Given that Kate is often used as a shortened version of the name’s Kathleen and Catherine, and we know that Kate’s middle name was Hannah; while Catherine had a middle name beginning H; I therefore assume Catherine H Frost and Kate Hannah Frost are in fact one and the same person, this would go some way to explaining why no further details about Catherine H could be found post 1881.
What I don’t understand is the fact that William and Rachel chose to enter their daughters name as Catherine H on the census, yet on the registrations of birth and death she is known as Kate Hannah, we’ll never know the reasons why this was so, but from my own point of view I’d have thought Kate’s ‘official’ name to have been Catherine, but at the end of the day, it’s Kate’s/Catherine’s middle name/initial that confirms her identity for me.

Discovering the above details for Ruth and Catherine, I really can’t begin to imagine just how awful a time it must have been for the family to have lost two members… especially two young children… within three months of each other; my heart went out to the family upon having made such discoveries.
As far as I’m aware, Catherine was the last child William and Rachel had, what with the deaths of two children, and the fact that Rachel at the age of 46 had endured bearing and rearing ten children over a twenty one year period, and what with all the associated housework then expected of a wife and mother, I’m not surprised the extent of their family was brought to a close.

1891 allows us to catch another glimpse of the now much reduced Frost family, William and Rachel are still to be found living on Lows Lane, only this census tells us that the house number and road name have changed, for they’ve gone from being at No 5 Lows Lane to No 6 Furnace Yard.  I will try to clarify the housing numbering in later, in the meanwhile lets take a look to see what the Frost’s are up to.

William Frost is now aged 58, and we see him here still in the employ of Stanton Iron Works as a Furnace Foreman (Stanton Iron Works lay to the rear of his house as will be seen later), Rachel is 56, Mary Bircumshaw (Rachel’s daughter) is now known as Mary Bircumshaw Frost and is aged 30, Isaac is aged 25 and is employed by ‘Stanton’ as a Furnace Keeper (I wonder if he worked alongside his father; chances are he did), and lastly we see Alfred James, aged 14, and employed (also at Stanton I presume) as a Pattern Makers Apprentice.
It appears from having followed the Frost’s over the years that the Stanton Iron Works was a major source of income for the Frost family members, as it was for many hundreds of families, and with William now being a manager/foreman, I believe his position within the company afforded him (what I also believe to be) a tied house, and that as his responsibilities grew with the aforesaid company, so did his elevation in housing; it’s the only reason I can think of that allows William and Rachel to be seen to be at different addresses, each successive house being slightly bigger than the previous.

The 1901 census is sadly the last census we see this particular branch of the Frost family under one roof, the end of an era, and even on this census we can see how things have changed, for William; now aged 68; and still employed as a Furnace Manager; is facing life as a widower for the second time in his life, as Rachel passed away in 1897; almost four years prior to the date of this census. William’s address now being No 6 Iron Works Road (though he still lives on Lows Lane!)
However, he still has family with him, for he has his step-daughter Mary (aged 40), he’s got his daughter Rachel, now aged 22, and employed as an ‘Assistant School Teacher in Ilkeston’ (following her in brother Josephs footsteps by the look of it), William also has three visitors to the house, Walter York (Grandson aged 11), William George Pinder (Grandson aged 2), and Frank Marlow (Visitor); a Butcher.
With regards to ‘the visitors’ to the house:
Walter York is the son of William and Sarah Ann’s daughter Mary Ann (Married to George York)
William George Pinder is the son of William and Rachel’s daughter Sarah Jane (Married to Harold Robinson Pinder)
Frank Marlow was at this time betrothed to William and Rachel’s daughter Rachel; indeed it was that they were married within eight weeks of this census being taken, the date and location of their marriage being: 27th May 1901 at the church of St Michael in Stanton by Dale. 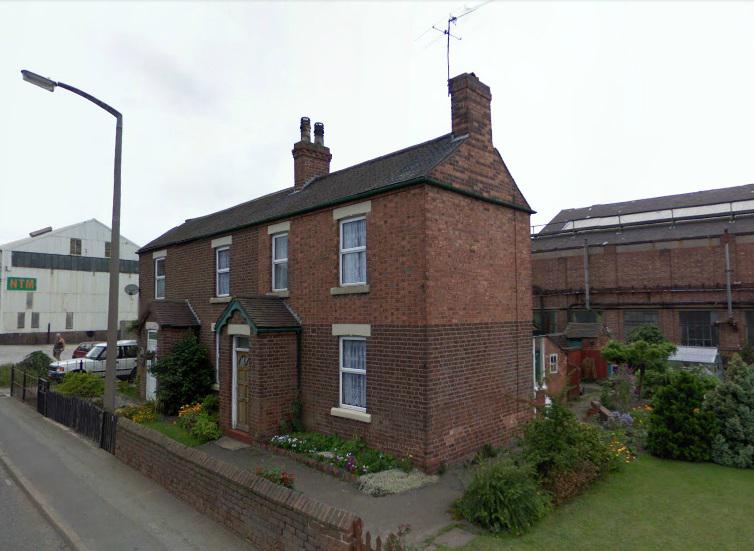 As can be seen above the houses currently numbered 3 and 4 still have the front door porch and they therefore still maintain an as built configuration.

Based on the census for the years 1881-1901, the following table shows which house/s the Frost family are seen to be living in.

To research which houses where the Frost’s lived in on Lows Lane… aka ‘Furnace Yard’ (1891) and ‘Iron Works Road’ (1901)… I looked at the way the enumerator did his round, and on all three of the above census there were always just four houses (pictured above) between the two markers I used, one marker being ‘Lows Lane Farm’, the other marker being the pub ‘Seven Oaks Inn’, both being on Lows Lane.

The house now known as No 4 Lows Lane is the house nearest to what was known as Lows Lane Farm, while No 1 being nearest to the Seven Oaks Inn; it was then easy to identify and place individual families into each of the respective houses per census year. 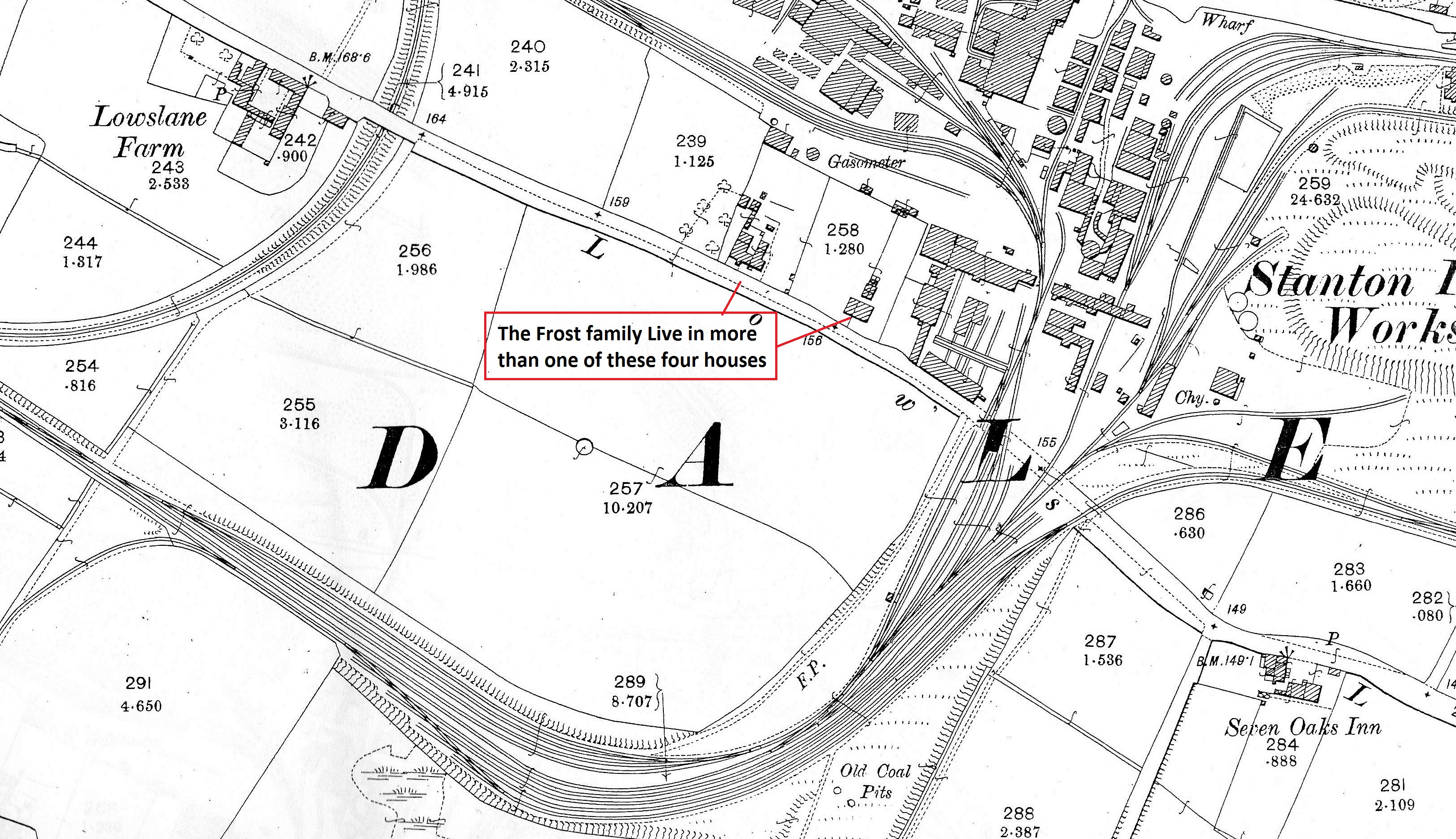 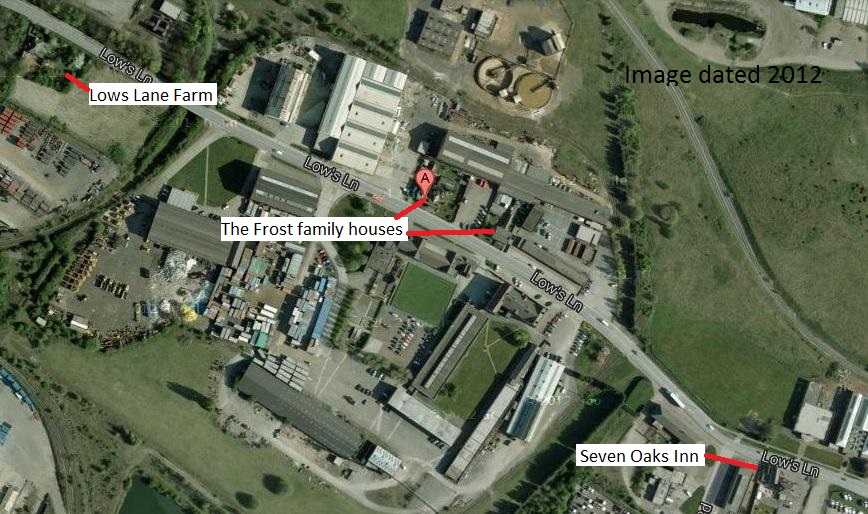 Compare the above 1899 map to this image from Google Maps; one can still use the railway lines to pinpoint where the farm, the houses, and the pub are; not bad going to say there are approx 115 years between the two.