Beyond Frank Hallam’s Row, Adeline recalls that “at the bottom of Queen Street, you went over a little footbridge into the field, now a road, and I think it is called Queen Street Drive.
“Against England’s Field**, afterwards Albert Street, Mr William Hawkins bought some land and built two cottages, one he reserved for his stock of fireplaces, etc., the other he lived in.”

As Edwin Trueman notes (Trueman 1) William Hawkins was the son of Samuel (and Ann (nee Smith)).
His father’s ancestors “came out of Staffordshire, and worked as engineers at the erection of Morley Park Ironworks (near Heage), which fell into disuse about seven years ago” (i.e. about 1880). 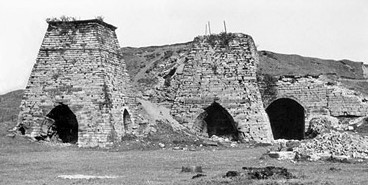 William’s mother was “a daughter of … Thomas Smith .. of Shottle”.
Though his father lived for many years at Duffield, William Hawkins was born in December 1829 at Hyson Green, Nottingham — “to which place his father had removed” — and was later apprenticed to an iron founder at West Hallam.
After this he travelled to various parts of the country and on the 1851 census was employed as a moulder at Netherthorpe, Sheffield where he married Ann Gregory in that year, on August 11th.
(Ann was possibly the illegitimate daughter of Elizabeth Gregory, born in West Hallam in 1829).
Their daughter Eliza was born at Oldham, Lancashire about 1853.

“Mr. Hawkins started his foundry in the old building opposite the Nag’s Head”
This would place it just south of Weaver Row, opposite the Raynes house, later to be the home of baker Amos Beardsley and family. 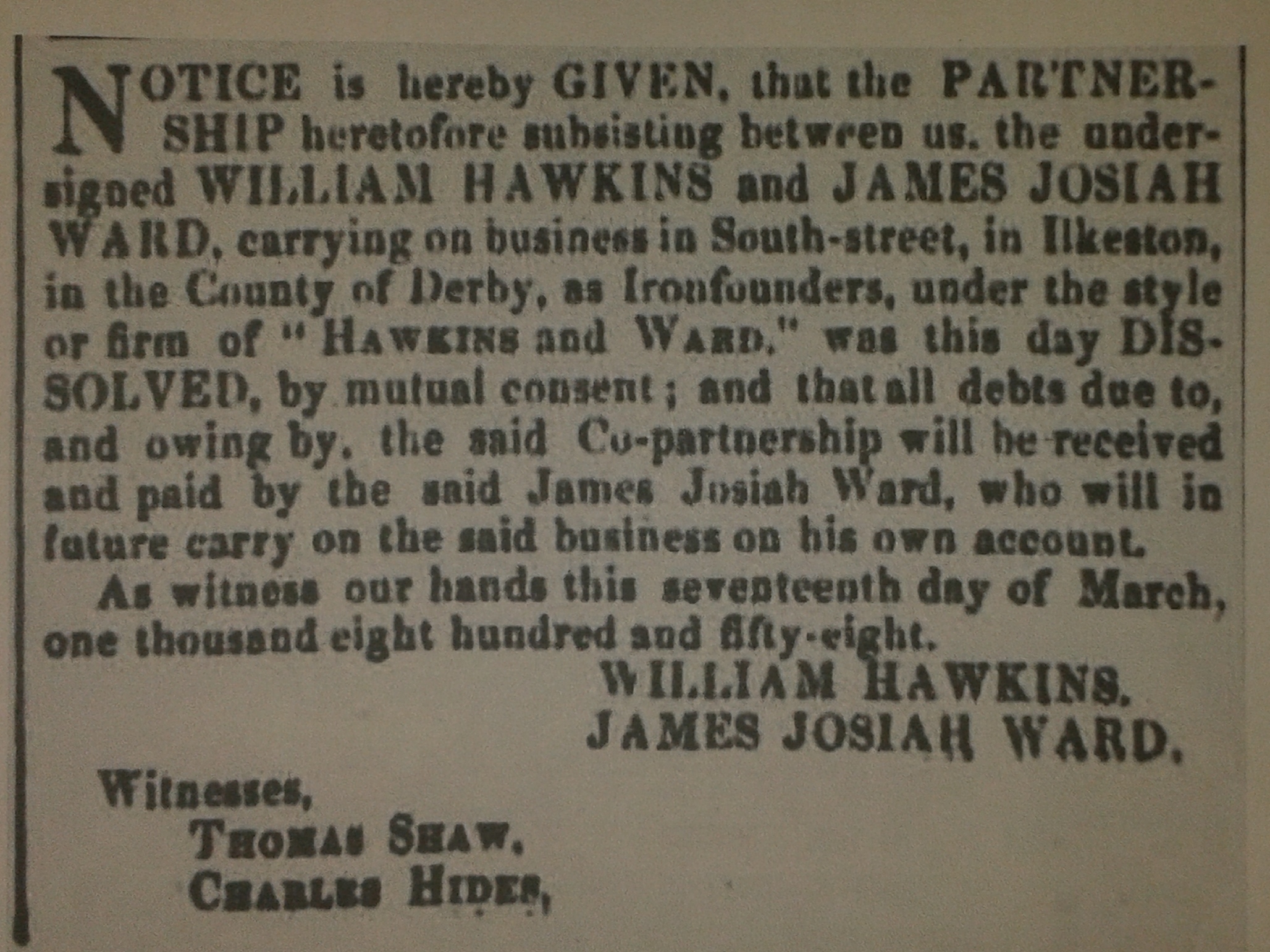 “He transferred his foundry business from South Street to Queen Street.”

The letterhead of William’s business correspondence indicates that his firm was established in 1853 while the Rutland Foundry and Works of Queen Street/Albert Street were established in the following year. This might support Adeline’s account that the firm moved out of South Street after just a few months.

In February 1879 William read a paper on ‘Bees and their habits’ to the Church Mutual Improvement Society.
“The essayist proceeded with much care and minuteness to particularise the habits of the bee in collecting honey, in storing it, in making cells, and rearing the young bees, in their various stages of egg, grub, chrysalis, and fully developed insect”. (IP)
Questions and discussion followed.

In January 1881, about 4pm, an alarming occurrence at the Rutland Iron Factory:
“It appears that a quantity of metal, to be used for casting, was being melted in a cupola on the works, when suddenly the material which had been used to block up the opening where the cupola is cleaned out was blown away with a tremendous report, which startled the whole neighbourhood. Molten metal flew in all directions, and a large number of the window panes were smashed, but, fortunately, none of the men suffered serious injury. People living close by rushed out in time to see a cloud of steam and dust arise, and in a few minutes a large number of people assembled at the works. The report was heard at a considerable distance, and the utmost anxiety was manifested until it was known that the workmen had escaped injury”. (NG)

In December 1881 William was voted onto the Local Board by the existing members to replace Samuel Streets Potter of the Park who was departing for America. (The latter died of fever at Fort Collins, Colorado, less than four months later, aged 29).

William resigned from the Board in February 1883 after being accused by fellow Board member Charles Mitchell of accepting contracts of work for the Board whilst still being a Board member, contrary to the Public Health Act 1875. As a result on this contravention William was due to appear at Derby Nil Prius Court but was offered a ‘get-out clause’… his penalty of £50 would be withdrawn if he agreed to resign and pay the full costs of both sides. He did and it was.

(At the same time and in the same court plumber and glazier Henry Clay senior was accused by the same person of the same offence, though there was not the same reaction — see The Mundy Arms).

September 1888: — Tenders for improving the heating system at Granby Girls’ School were laid before the School Board and the tender of Mr. William Hawkins, of Ilkeston, who offered to do the work for £25 10s, was accepted.(Nottingham Journal  Sept. 7th)

In fact there were at least eight children in the family …. Eliza, William, Jacob, Ann, Samuel 1, Samuel 2, Isaac and Charles Smith.

Eliza married Ilkeston-born iron moulder Herbert Rigley in 1874 and from Queen Street moved to settle in Graham Street in the 1880’s. Herbert died at Number 38 in June 1906, aged 54, while Eliza died at the same address in June 1919, aged 65.

Eldest son William junior, born in 1855 in Ilkeston, worked for his father as a clerk.
In 1881 he left for Elmer U.S.A. where, according to the Pioneer (1939) he was “an early pioneer in Texas” and “was killed under mysterious circumstances”. The Derby Mercury (1885) reported that he had become the owner of a cotton gin and in October of that year a wayward bale of cotton stuck William and knocked him to the ground, fatally fracturing his skull against a rock.

Jacob was a gunsmith, trading in South Street where “his premises with their stuffed birds, antique swords and other curiosities, to say nothing of the iron chest containing gelignite and several other kinds of explosives, was a rendezvous for a number of well-known townsmen”.
His first wife, whom he married on Christmas Day 1883, was Catherine Wilkinson, daughter of Little Hallam cottager Isaac and Elizabeth (nee Straw), who died at their home – 24 Kingsway – in December 1916.
Jacob’s second wife was Margaret Elizabeth Hoyes. They were married in October 1922.

Ann was born in 1859 and by 1911 was living, unmarried, at 20 Hobson’s Drive, with Ann Hawkins, another spinster and 12 years her senior. This was her first cousin, the only child of John Hawkins and Frances Maria (nee Kendrick).

Isaac (not Herbert) was employed at his father’s works when on Christmas Eve 1894 he married Staveley-born Elizabeth Marian Williamson, daughter of engineer Henry Edward and Julia Anne (nee Taylor).
Less than a year later Isaac was mourning the death of his wife, following complications resulting from the birth of their daughter Catherine Williamson Hawkins.
Three years later he remarried to widow Fanny Hammond (nee Harwood).
On the day prior to Christmas Eve of 1899 Isaac and Fanny arrived in New York, having sailed from Liverpool a week earlier on board the ‘Campania’. With them was their daughter May who had been born in Ilkeston in July.
Also in their party were Hettie Hawkins, aged 14, Ernest aged 11, William aged 8, Bessie aged 7, and Miriam aged 5.
Isaac’s immigration papers show that he was going to join his brother Charles who had been in the USA for four years.
By 1901 Isaac, Fanny and children had made their home in Toronto, Canada and by 1911 – and with several additional children — were in North Bay where Isaac was still working as an iron moulder and where he “helped to extend the railway towards the north”. (IP 1939)
Two of the ‘additional children’ — Lily and Joseph Charles — were married at North Bay in 1926 and 1927 respectively when (uncle?) Charles Smith Hawkins was a witness at both marriages.

Charles Smith was described by the Pioneer (1939) as “a keen member of the South Notts. Hussars” who served with the Bushveld Carabiniers in the South Africa War, after which he travelled extensively.

The Pioneer (1939) reported that William sold his works in June 1899 to the Rutland Foundry & Works Co..

He and his wife left their home at Elm Villa in Stanley Street/Stanton Road and retired to Shottle “where on his mother’s side his family held rent receipts of holdings for over 300 years”.

By the 1901 census they were living at Blackbrook, Milford, close to Shottle. However William’s wife Ann died at the home of daughter Ann at 20 Hobson’s Drive, Ilkeston, in October 1901, aged 72.

Two years later William remarried, to Emily Jane Whitehead and the 1911 Census shows them at Starbuck House in Blackwood. 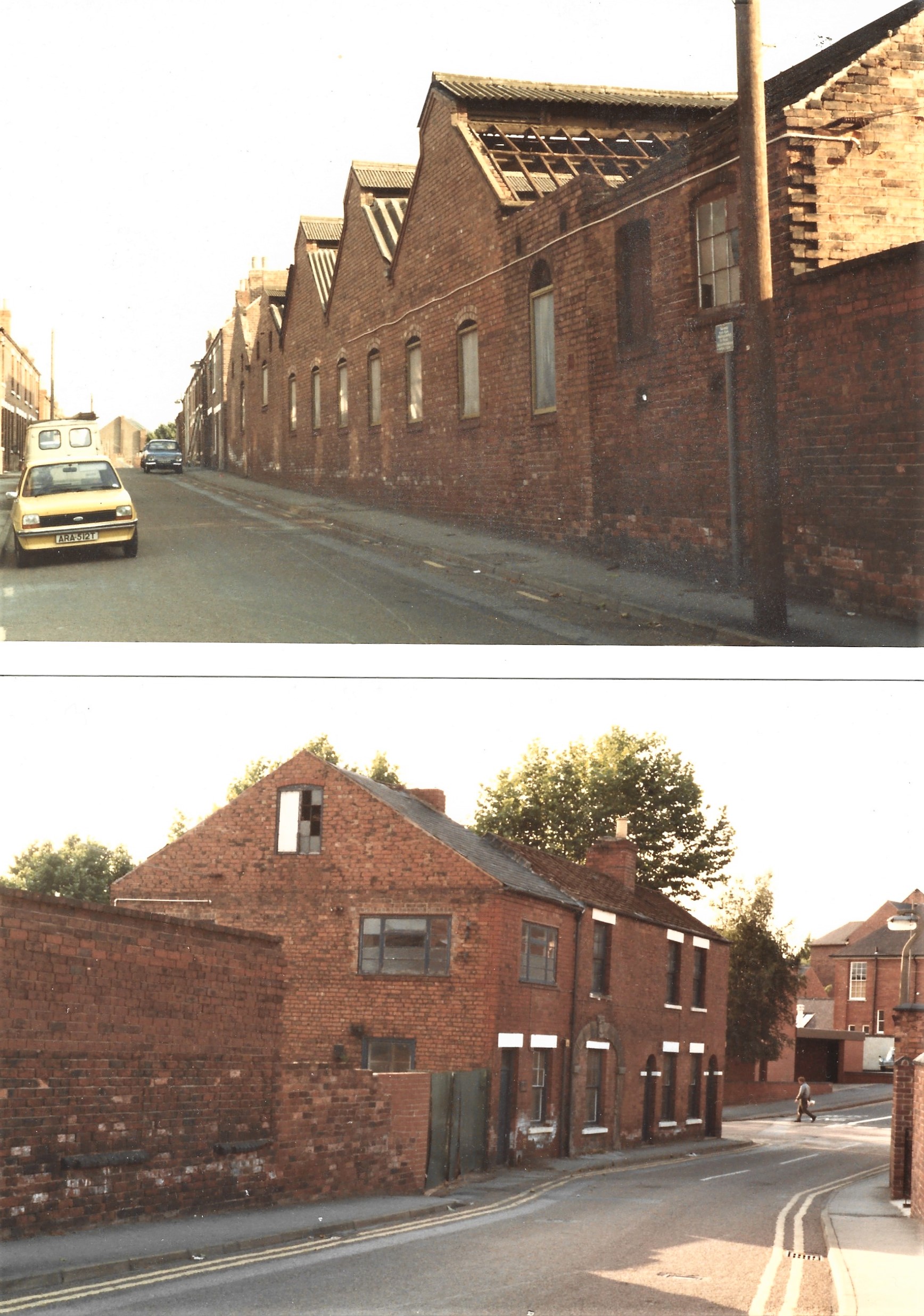 The Rutland Foundry in Albert Street, just prior to its demolition in 1966/67 (?) (courtesy of Jim Beardsley’s collection)

The Hawkins in Ontario.

S. Hawkins — great grandchild of Isaac  and Fanny Hawkins — has commented from Ontario about the Hawkins family and asks for confirmation/clarification of  some of the details.

(The full remarks, which I have edited here and to which I have made additions, can be seen in the Comments section, here)

This is the info that my mother’s cousin gathered and shared with us.
My mom remembers her aunts and uncles listed here.
My grandfather worked on the railroad here in Ontario.
If this information is inaccurate I would welcome any corrections.

I believe that Isaac Hawkins was born on March 3rd 1866 and married Elizabeth Marian Williamson at St. Mary’s Church, Ilkeston on Dec 24th 1895. He was aged 29, an engineer, son of engineer William. She was aged 25, daughter of engineer Henry Edward, The witnesses were Samuel Edward Williamson and Mary Ann Williamson.

Isaac then married ‘widow’ Fanny Hammond at St. Wilfrid’s Church in West Hallam. He was aged 32, a mechanic, and she was aged 33, daughter of ‘Jesse Westerby’, a baker. The witnesses were William and Harriet Hartshorn.

The couple then had a daughter May Hawkins, born at 9 Hobson’s Drive, Ilkeston, on Jul 30th 1899.

It could be that Isaac’s daughter by his first marriage, Cathleen (Catherine) was on the 1901 census as the adopted daughter of Isaac and Ruth Wilkinson at Little Hallam, Ilkeston. Isaac Wilkinson was the brother of Cathleen’s aunt Catherine Hawkins (nee Wilkinson).

This brings us on the Isaac Hawkins’ elder brother Jacob who married Catherine Wilkinson on Dec 25th 1883 at St. Mary’s Church, Ilkeston. He was aged 26, an iron founder, son of  iron founder William. She was aged 24 the daughter of labourer Isaac. The witnesses were William Wilkinson and Ann Hawkins.

Jacob and Catherine, and their subsequent children, then appear on the 1891, 1901 and 1911 census. With them on the 1911 census is their niece Cathleen Williamson Hawkins.

Catherine Hawkins died on Dec 5th 1915, aged 56, at the family home of 56 Kingsway, Ilkeston. By that time her husband Jacob was a motor cycle agent, and her eldest son Samuel George had moved to live in Clayton Bridge, Manchester.

Jacob then married Margaret Elizabeth Hoyes on Oct 25th 1922 at All Saints’ Church in Kirk Hallam near Ilkeston. He was aged 65, a cycle engineer of 24 Kingsway, and she was a spinster, aged 60, of the Croft, Kirk Hallam, daughter of John (dec) a corn merchant. The witnesses were Hugh Gervan Dalgleish, Katherine Dalgleish and M.C. White.

(All these ‘Isaacs’ and ‘Catherines’ don’t make the details easy to understand).

A neighbour of William was Fred Flint, tailor