The Derbyshire Estate in Stanton Road

This is another property story taken from the unique document archive, kindly loaned to this site by Jim Beardsley. It describes the development of the area on the west side of Stanton Road from what was later Toll Bar House in White Lion Square, southwards to Union Road, and thus including First, Second and Third Avenues.

On July 4th 1879 Job Nightingale Simpson Derbyshire mortaged his Stanton Road property for £835. It was described as ‘a messuage or tenement, with the cowhouse, barn, outbuildings and appurtenances, and a close of land or homestead thereto adjoining … ‘ In total it covered about 2¼ acres, and can be seen on the map below. 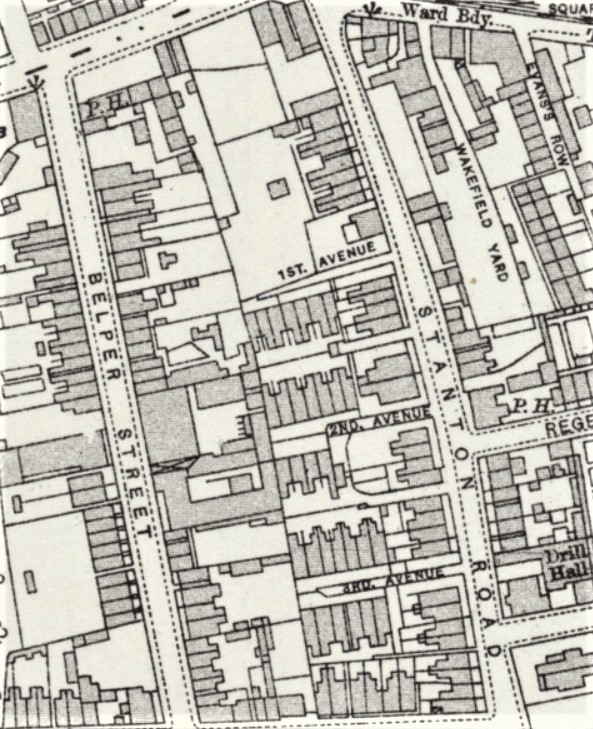 You can see, between Belper Street and Stanton Road, a property line running north to south, and being almost equidistant from the two thoroughfares. This separated the property of Amos Tatham (on the west or left) from the ‘Derbyshire Estate’. The latter thus occupied the east or right portion, stretching almost from White Lion Square (at the very top of the map) to what was later Union Road (at the very bottom).

Job Nightingale Simpson Derbyshire died on August 17th 1886 at Cleethorpes, aged 52.
By this time he had left Ilkeston and his family home was then at 22 Chaucer Street, Nottingham, where he was living with children Samuel Patrick, Job Nightingale and Annie Mary.
He had made his will many years before — in April 1869 — and his wife Mary was named as the sole benficiary of his estate, which included and continued to include the Stanton Road premises.
Job’s widow Mary died at the same Nottingham home in October 1888. She was 62 years old. In her will, she directed that all her freehold property in Stanton Road and Derby Road, Ilkeston, was to be sold as and when her trustee and sole executor deemed it fit to do so; that person was her eldest son, Samuel Patrick. At this time the mortage taken out in 1879 (above) was still in force and the full principal of £835 was still owed — and remained so until 1893 — although the interest on the loan was paid regularly.

On March 18th 1893, Samuel Patrick paid off the full principal of the mortgage loan and the premises in Stanton Road were reconveyed to him.
Obviously he had decided to sell the property, and a week later the deal was done. Henry Thurman, solicitor of Thurman, Cattle and Nelson of 8 Bath Street (next to the Borough Arms), paid £1373 12s 0d for the property …. though some parts of the estate had already been allotted to other purchasers. Thus what was originally about 2¼ acres had been reduced to just under 1½ acres (6868 square yards).
You can see this in the plan below, which accompanied a building agreement dated 1896. (Note that North is to the right) 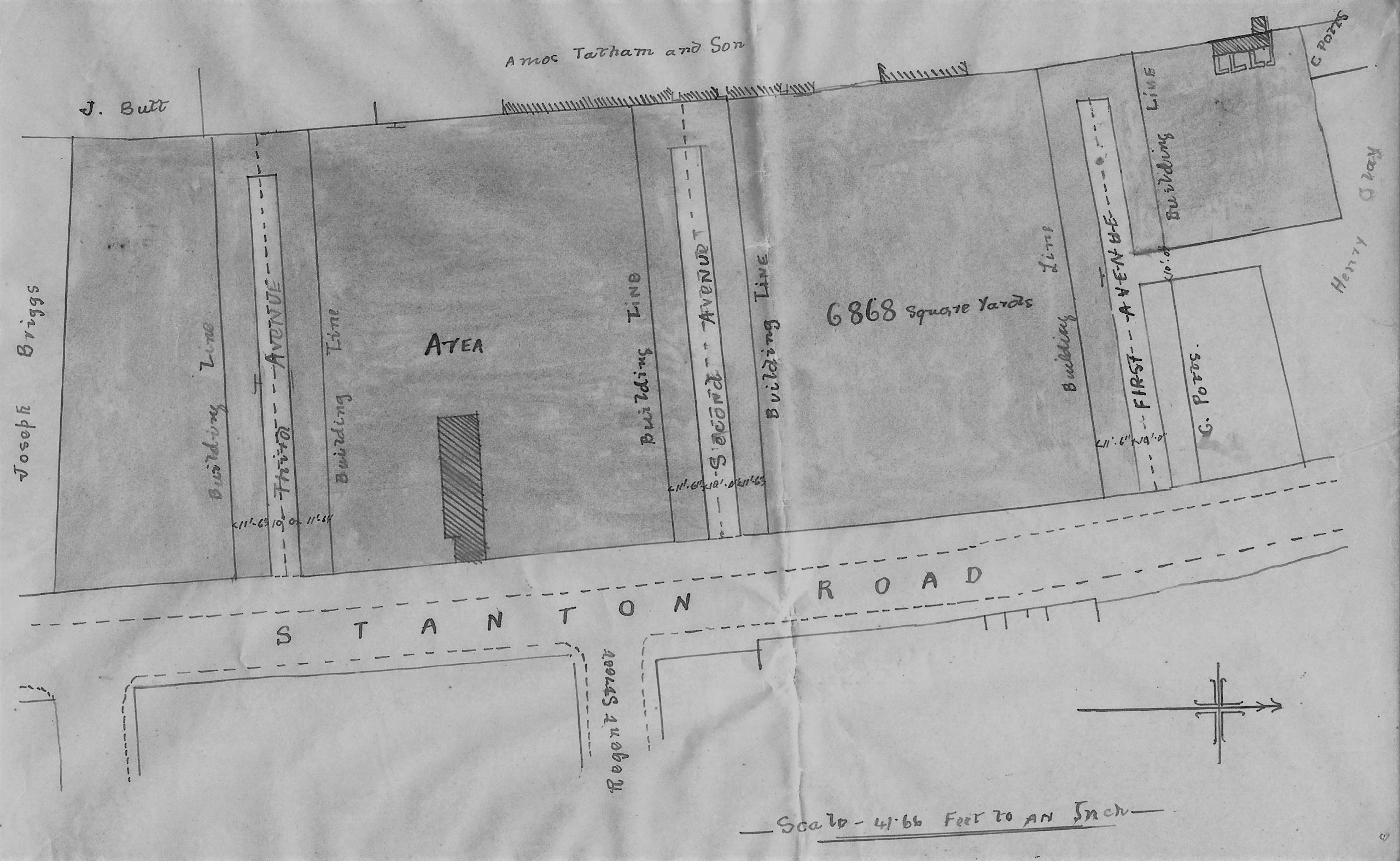 Plan 1: the area purchased by Henry Thurman in 1893

The land purchased by Henry Thurman is shaded. Parts to the north bear the names of C(harles) Potts and Henry Clay, with Joseph Briggs at the south.  These are the portions already, or about to be, sold off to other buyers. Henry agreed to build a wall or fence on the north, south and west sides of the property he had purchased, except where buildings had been erected. He also agreed to form and asphalt a roadway, which was to be called First Avenue, and at its side, build a wall, not exceeding 18 inches in height “with suitable iron palisades of the height of three feet upon such wall, with proper gates and entrances”. Nor was he to exceed any of the building lines shown on the plan.

A year after his purchase, in 1894, Henry Thurman married the ‘servant’ with whom he was living at 8 Bath Street on the 1891 census. She was 38-year-old Elizabeth Amy Goodrick who, two years before the marriage, had given birth to an illegitimate son, Thomas Henry Goodrick — was his father Henry Thurman ?

Suffering from a ‘protracted illness‘, Henry Thurman decided to make a will — on April 3rd 1895 — bequeathing his estate to his wife Elizabeth Amy. And on July 7th of the same year — four days before his fiftieth birthday — he died at his Bath Street home.

With her son, Henry’s widow returned to her home county of Lincolnshire, and on April 27th 1896, at the Chapel of Ease in Midville she married farmer Joseph John Alliss. Shortly after she agreed to sell her inherited estate to Ilkeston builder Walter Scott; because of previous sales, the property had been further reduced to 3476 square yards (a little less than ¾ of an acre). Compare the plan below with the one above and you can see the areas which had been sold off and to whom, and the shaded area which was sold to Walter Scott. The sale was completed on June 24th 1897. 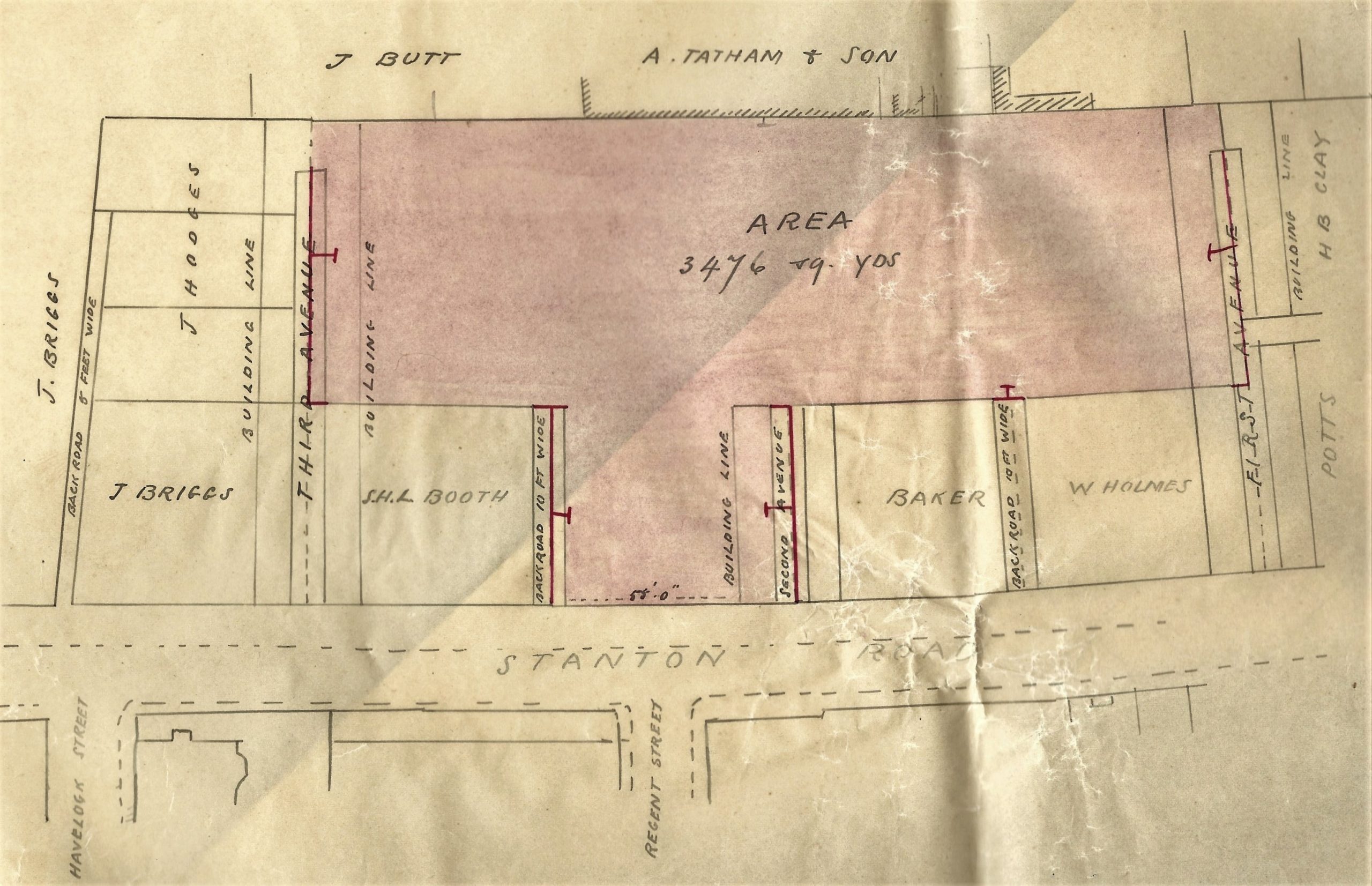 Plan 2: the area purchased by Walter Scott in 1897

On Plan 2, you will notice that Walter had bought parts of First, Second and Third Avenues, and the Back Road to the south of Third Avenue — a Back Road, as its name suggests, was simply an alley allowing access to the rear of the houses. Walter agreed that these parts, past a building line shown, would not be built upon but would remain open and available to future residents. He also agreed to build a boundary wall or substantial fence, not less than five feet high, along the west and north sides, except where there were buildings. Where the land belonged to him, he would also build walls along First, Second and Third Avenues, and the Back Road, of no less than 18 inches in height, and “with suitable iron palisades of not less than three feet high”; and he would duly form drains and asphalt these streets and passageways.

Walter quickly got to work along Third Avenue and within a year had built seven houses along it. For the sake of posterity, the original tenants were listed as the households of Enoch Syson, Isaac Smth, E Marshall, Albert Rice,, Benjamin Walters, John Hiskney and John Duro.

On June 20th 1898, Walter agreed to take out a mortgage for £600 with Eliza Ball (nee Gillott) of Heanor, widow of Nathan Clarke Ball, and her two sons, John, a warehouseman of Codnor, and postmaster Thomas of Heanor — using the seven houses just built, and their land, as security. The area mortaged is shown, outlined in red, on the plan below; it measured 745 square yards. 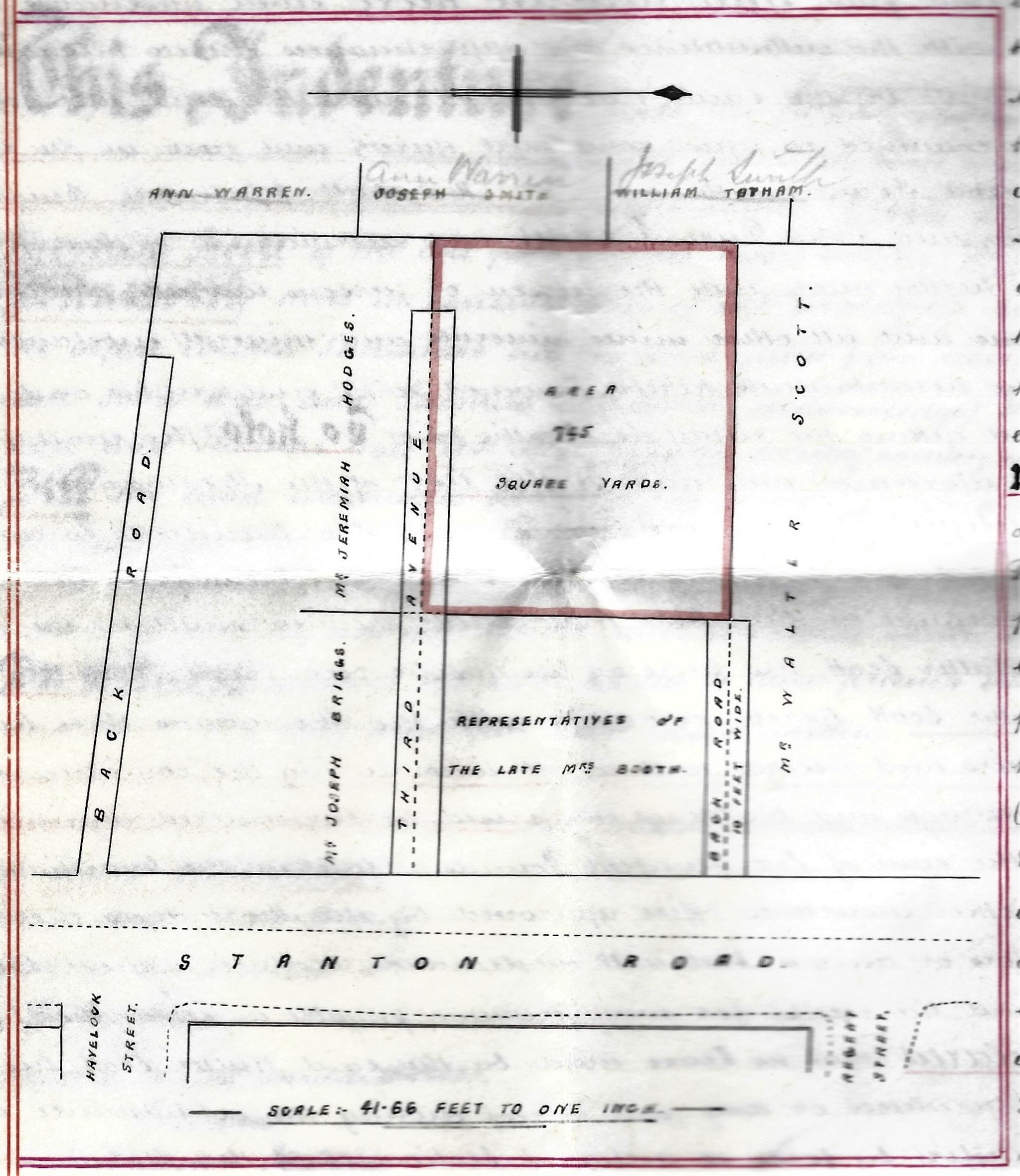 Plan 3: the area mortgaged by Walter Scott in 1898

Just over a year later — on June 27th 1899 — Walter Scott paid off his mortgage, with interest, and the premises were reconveyed to him.

By 1899 it appears that Walter Scott had built a further seven houses in the area, this time along First Avenue. Again, for posterity, the occupiers were Joseph Maycock, Osborne Nicklin, Morris Bellamy, Samuel Hart, James Henshaw, George Dennis and James Calladine.

And, two days after paying off his mortgage with Eliza Ball — on June 29th 1899 — Walter sold his 14 houses, to Clara Horton (nee Sedger), of Park Drive, Ilkeston, the wife of engineer Thomas Alfred James Horton, for £2170. 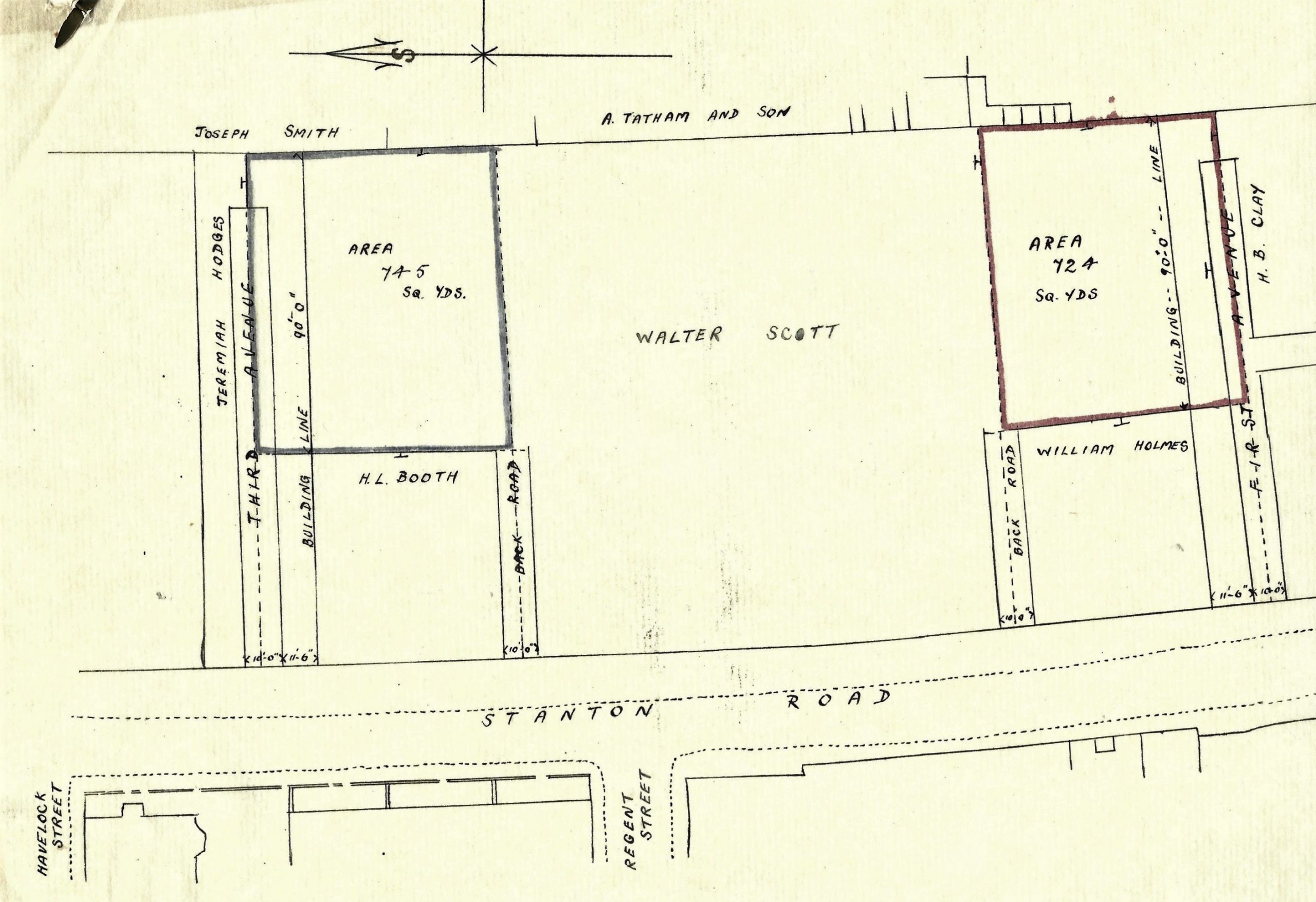 Plan 4: the two areas purchased by Clara Horton in 1899

Shortly after this, on July 15th 1899, Clara mortgaged the two areas for £1400, with Ben Booth Gilbert, a draper trading at High Street in Alfreton, Derbyshire.

Ben Gilbert died on March 21st 1906 at Clavadel, Switzerland. The trustees and executors of his will were his widow Emily (nee Radford), still living at Alfreton; his brother William Frederick Gilbert, a draper of Barlborough, Derbyhire; and his brother-in-law William Peel, a butcher of Alfreton. According to the will Emily was to enjoy the use of her late husband’s household and personal effects, and the income from his residuary estate, or a life annuity of £200 in the event of her remarriage. His three sons were also beneficiaries.

On March 10th 1922 Clara Horton repaid the mortgage plus interest in full, to the three will trustees, and thus the premises in Stanton Road were reconveyed. But on the following day, and joined in the agreement by her husband, she remortgaged the same area for £850 with Clara Frost (nee Holbrook), the wife of John Arthur Frost, a stove grate maker of Langley Mill.

Clara Horton died on June 12th 1945, and nearly two years later — on February 13th 1947 — the executor of her will, George James Lee, solicitor of 5 East Street in Ilkeston, paid off fully the principal of her mortgage, together with interest and costs. On the following day the same solicitor sold the area in Third Avenue, including the seven houses there, to Walter Lally, boot and shoe dealer of 23 Bath Street.

Walter Lally died on September 22nd 1956, and one of the main beneficiaries of his will was his unmarried younger sister Elizabeth Annie. She too made a will and died just over two weeks later after this — on November 28th 1969 — having appointed her nephew John Francis Lally to be her executor. He inherited the seven houses in Third Avenue.

We now return to Adeline’s Victorian Stanton Road, and continue walking down it … to meet William Gallimore