Dorothy’s grandfather was John Richards, born in Ilkeston in 1856, the youngest child of Cotmanhay coalminer William and Martha (nee Baker) 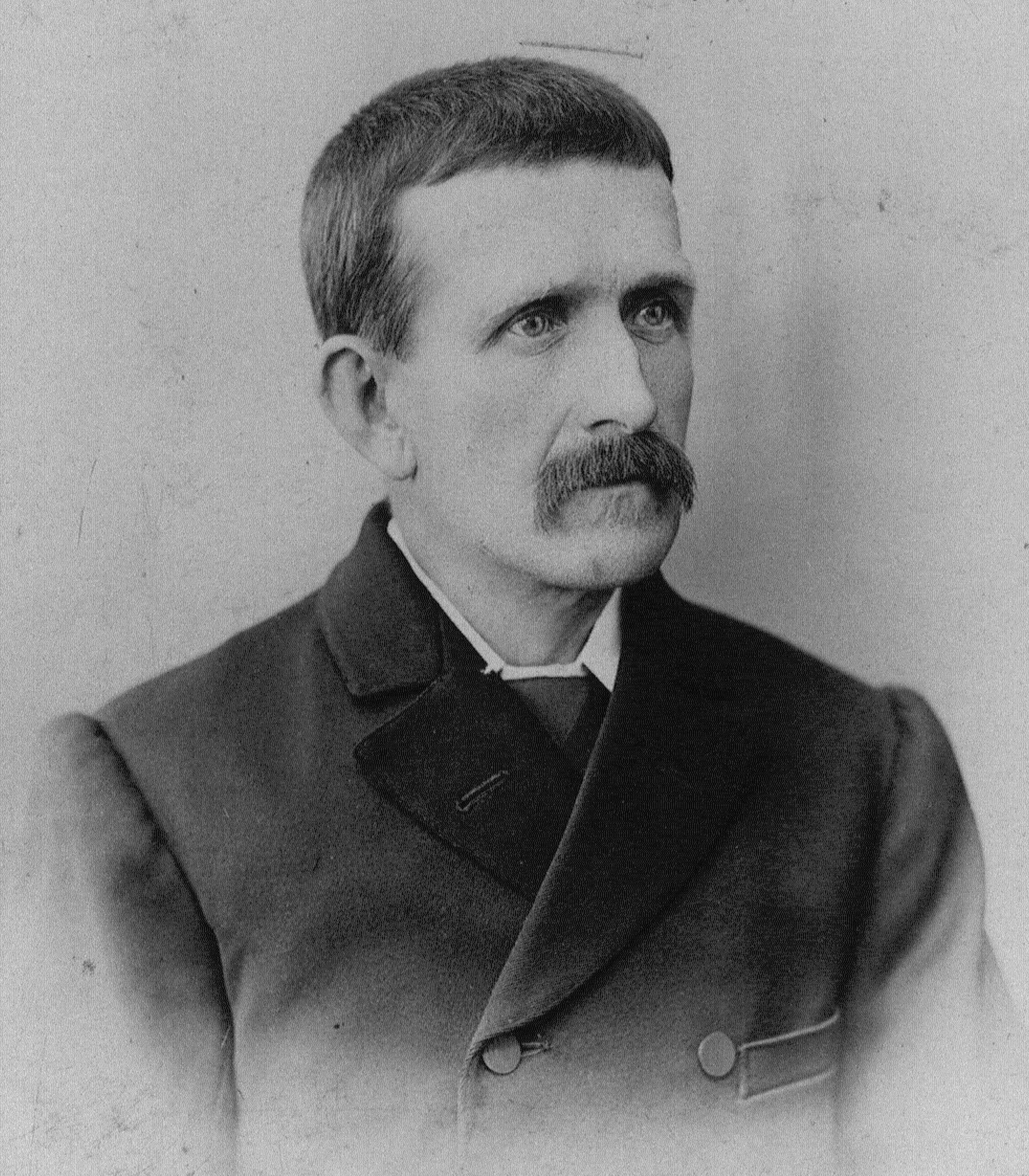 On the reverse is a printed description of ” A Seaman & Sons Studios ” of Pelham St, Ilkeston

Another section of Family Review, the poem written by a friend Bernard Shaw, this section about Elizabeth Richard’s father John ….

My last is Father who is not very cruel
While he can get whiskey in his gruel
I imagine he’s very often got a cold
When he sees a bottle of Scotch very old.

*The Manchester Unity was an association which John belonged to

Grandad went to the opening of Ilkeston fair every year and sometimes he would go when he could hardly walk, just to be there. And my dad (John Haywood) would remember that he always had a ride on the Chairoplanes…when the fair opened there were always free rides, and dad would say ” The silly devil..he was so ill for a couple of days “, and did my mother shout at him !!
When he was a lad they used to have public hangings. I can’t remember whether it was in Nottingham or Derby, and grandad used to go to them…he never missed one. 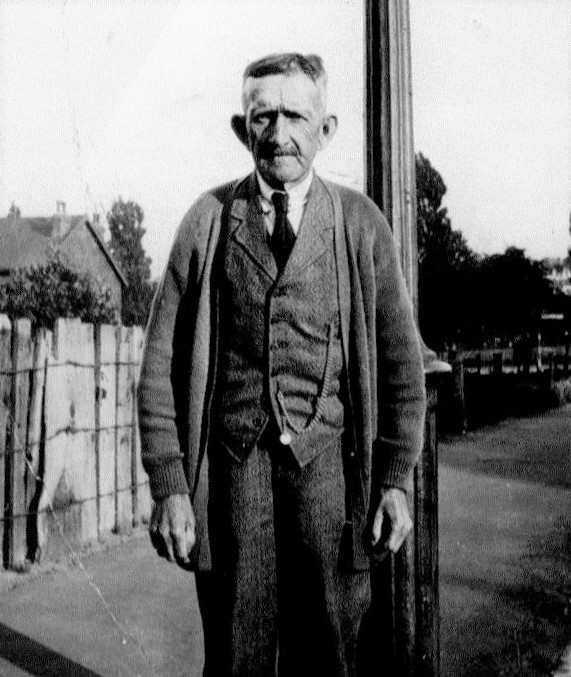 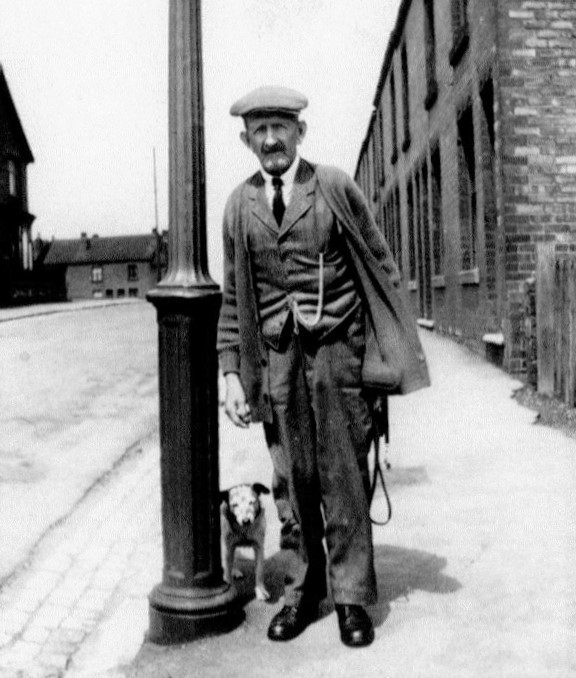 Here John is with Lady; his house is just behind him.

A UNIQUE RECORD … from the Ilkeston Advertiser, Jan. 1938

The death of Mr John Richards, who had the unique distinction of being present at every Mayor-making ceremony since the Incorporation of the Borough in 1887, took place on Saturday last at his home, 22 Flamstead Road, Ilkeston, at the age of 81 years. Mr Richards was present for the 50th and as it has transpired, the last occasion of the kind in November last. He was then publicly introduced to the Mayor (Coun Ernest Adams) by Ald. S Shaw, who said Mr Richards could claim to have had an experience which he thought no other person in Ilkeston or perhaps in the whole country could claim. The Mayor cordially shook hands with Mr Richards and chatted with him for a brief period, and then Mr Richards entertained the members of the Council and the public present to some interesting reminiscences of his experiences during the past half century.

Mr Richards narrated how it had been possible for him to set up such a unique record. A miner by calling he had worked at the pit for 60 years. At the time the town was incorporated he worked at the coal face and was paid 4/6d a shift. “We were very lucky” he said “to make two shifts a week, and three shifts was considered a treat.” But as a set-off against it was possible to get a “tip-top house” to live in for 3/6 a week, and rents ranged from 2/6 to 3/6.

How Mr Richards was able to set up his wonderful record was explained in this way. As he was working short time during the first four years (1887-91) he was able to attend the Mayor-making ceremony. For 31 years he was a deputy at the Kilburn seam of the Manners Colliery and he was able to arrange matters so as to be present at the annual municipal ceremony, and for another four years he worked on afternoon shifts, making a total of 39 years. “Eleven years ago I retired and that gave me a chance to be here” he added amidst laughter.

Mr Richards also mentioned that he had been a member of the Earl Grey Lodge of the Manchester United(Unity?) Order of Oddfellows for 64 years. When asked if he was attending the Mayoral luncheon Mr Richards shook his head significantly with the remark that luncheons were no good to him. Asked if he would continue to attend the annual ceremony, he smiled sadly and answered in the negative. “I have completed my 50 years and I am satisfied” was his parting remark. That was two months ago.“ 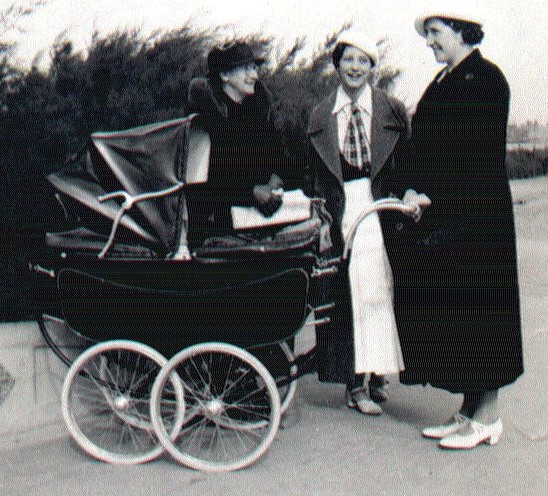 Annie Eliza (left) with her daughter Elizabeth Haywood (right) and a friend. Grand-daughter Dorothy is in the pram and so the date is about 1936-37 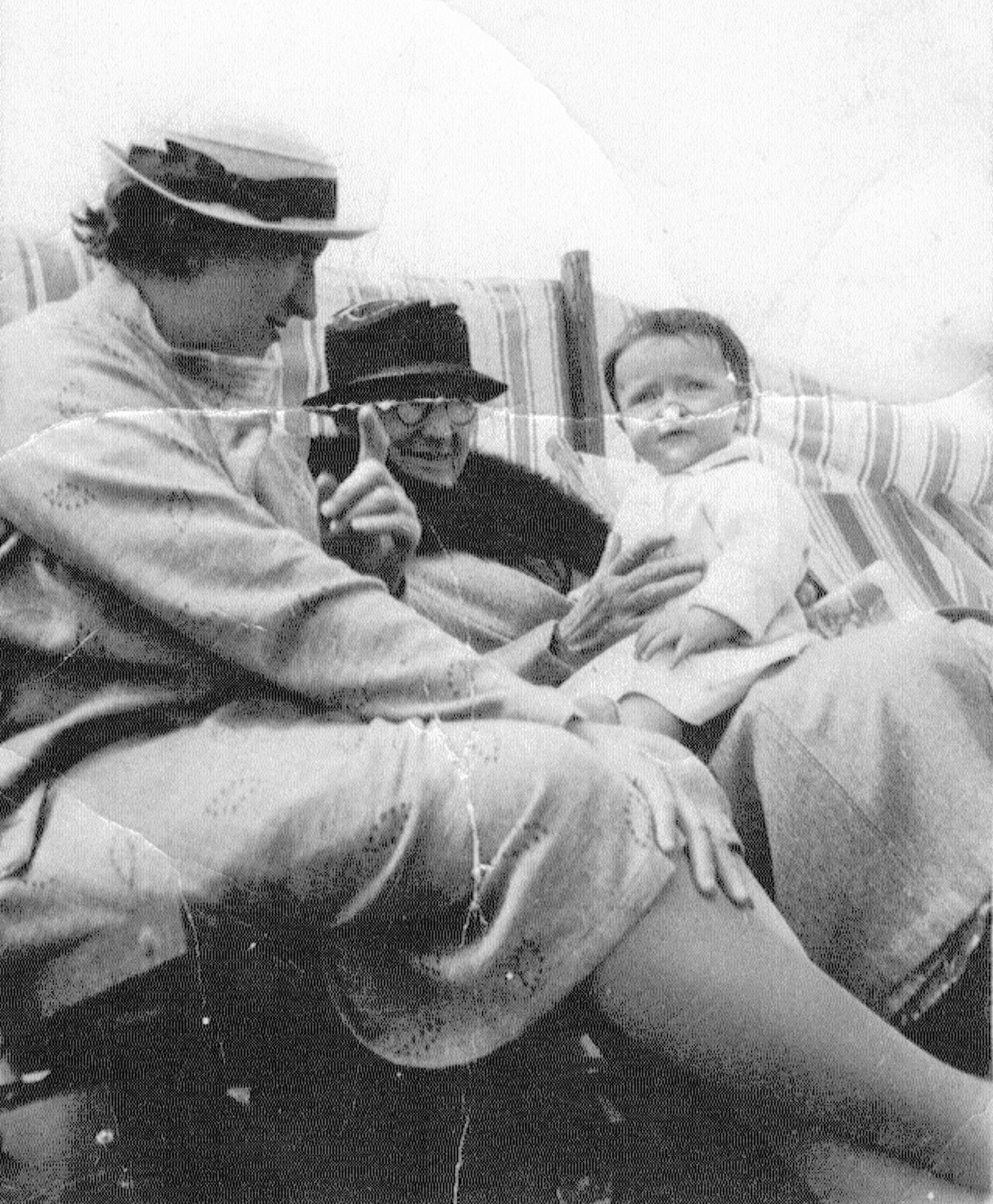 (When son Meynall Richards moved from 22 Flamstead Road to Bulwell about 1910), our grandparents then came to live in the house. They had lived at 3 Hope Street and then moved to 24 Wood Street off Station Road, before eventually coming to 22 Flamstead Road. My dad said that his mother (Annie Eliza Richards) who used to keep a pig, was always searching for larger premises to keep pigs and fowls and such. She was always on the move. My dad said that he could always remember distinctly his dad and mother arguing terribly because she always wanted to be moving….she would come home from work and she would say “Come on, we’re moving ! We’re going to live at so-and-so ” and that was it !
I remember seeing my grandma in the front room of this house, laid out after she had died

More verses from the Family Review, a poem written by a friend Bernard Shaw, dated February 15th 1921 … he is writing about Ann Eliza, the mother of Elizabeth Richards, his ‘girlfriend’.

The first on my list is mother so sweet
A member of Prims* Chapel in Bath Street
She’s worked all her life for her children so dear
She kept them from danger and also from beer.

She taught them to love Jesus their only Saviour
Also the great teachings of good behaviour
She keeps them from jazzing and going to the rink
By giving them lessons to wash in the sink. 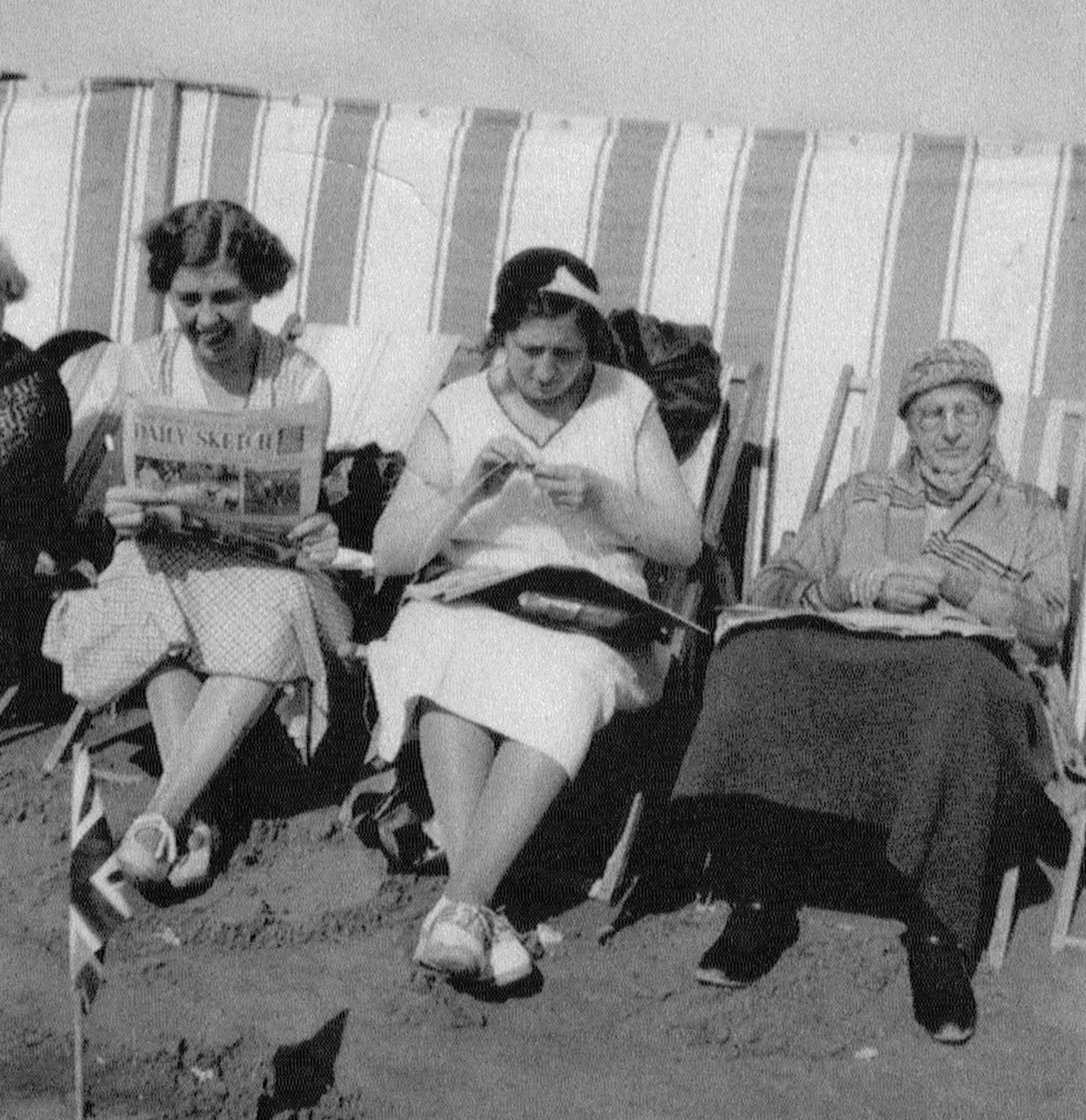 Grandad Richards is buried in Park Cemetery, with his son William. The grave is very badly neglected I’m afraid….personally I (Dorothy) never go because I don’t like cemeteries…it means nothing to me really, because to me, as a Christian, there are only bones in a cemetery. When they are dead, people are in a better place….and that’s how I feel. But if it comforts people to visit a grave, who am I to say? So I never look at Grandma’s grave now.
One thing that I have taken off my grandad Richards is that I’ll give anything away, but if I lose anything, I’ll search and search, and turn the house upside down….my mother used to say that I get that from grandad.

And finally, onto Dorothy’s aunts and uncles and cousins — all on her mother’s side