The Henshaws in Charlotte Street

George Henshaw was born on April 21st 1921, the son of William Henshaw, christened Willie to distinguish him from an older brother who died young, and Ruth Clara Vaughan. William was born in Ilkeston on the 19th of May 1883 while Ruth’s family lived on Main Street Carlton some 10 miles away when she was born on 7th August 1884. William and Ruth married at Christ Church, Cotmanhay on the 21st December 1907. The marriage was witnessed by Benjamin Vaughan (probably Ruth’s brother, but it could have been her father) and Lily Henshaw (William’s sister). Both William and Ruth gave their addresses as Charlotte Street Ilkeston and William’s occupation is recorded as Lacemaker.

William and Ruth’s first two children were born in Ilkeston – Florence Edith (b. 1908), known as Edith and James Frederick (b. 15 February 1912), known as Fred. 28 Charlotte Street is the address on Fred’s Birth Certificate.

War-time and a move ‘up north’

At the start of the First World War, there was a steep decline in the lace trade, and a severe lack of jobs of any sort in the Derby and Nottingham areas. But there was a shortage of men in the coal mines in Yorkshire, and recruitment teams used to come down to Ilkeston encouraging people to move and take jobs there. William Henshaw’s father had been a collier, and the Henshaws decided to move.

By February 1915, when Ruth’s brother Benjamin Vaughan wrote to her thanking her for the cake (!), their address was 52, Park Road, New Village, Askern, nr Doncaster. There William started a new career in the Collieries. This was still their address when Arthur was born later that year, and indeed in September 1916, when Fred was about to start school. By the time George was born in 1921, their address was 1, Station Road, Askern, and William’s profession was Colliery Deputy. 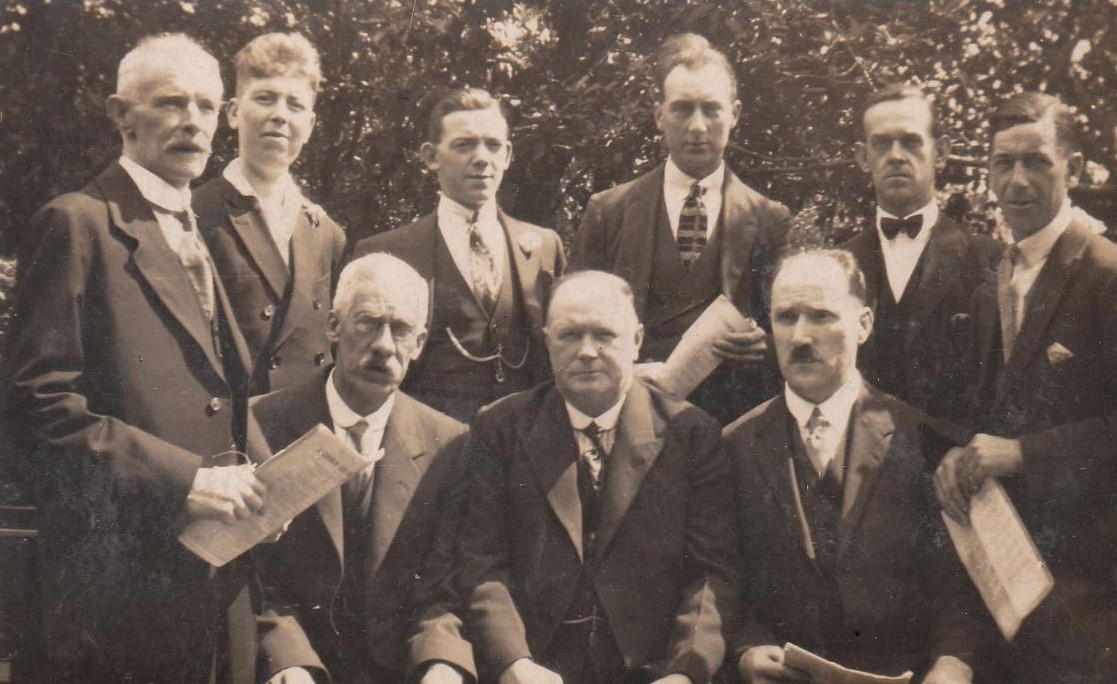 Mining Committee – 1920s. William Henshaw is on the right in the front row.

Ruth Henshaw was very active in the St. John’s Ambulance Brigade, and was Lady Divisional Superintendent of the Askern Nursing Division, from May 1917 until the Henshaws moved to Thurcroft near Rotherham. There she became Superintendent of the Thurcroft Division. The address given on the St John’s headed letter paper in 1928 is Steadfold Road, Thurcroft. 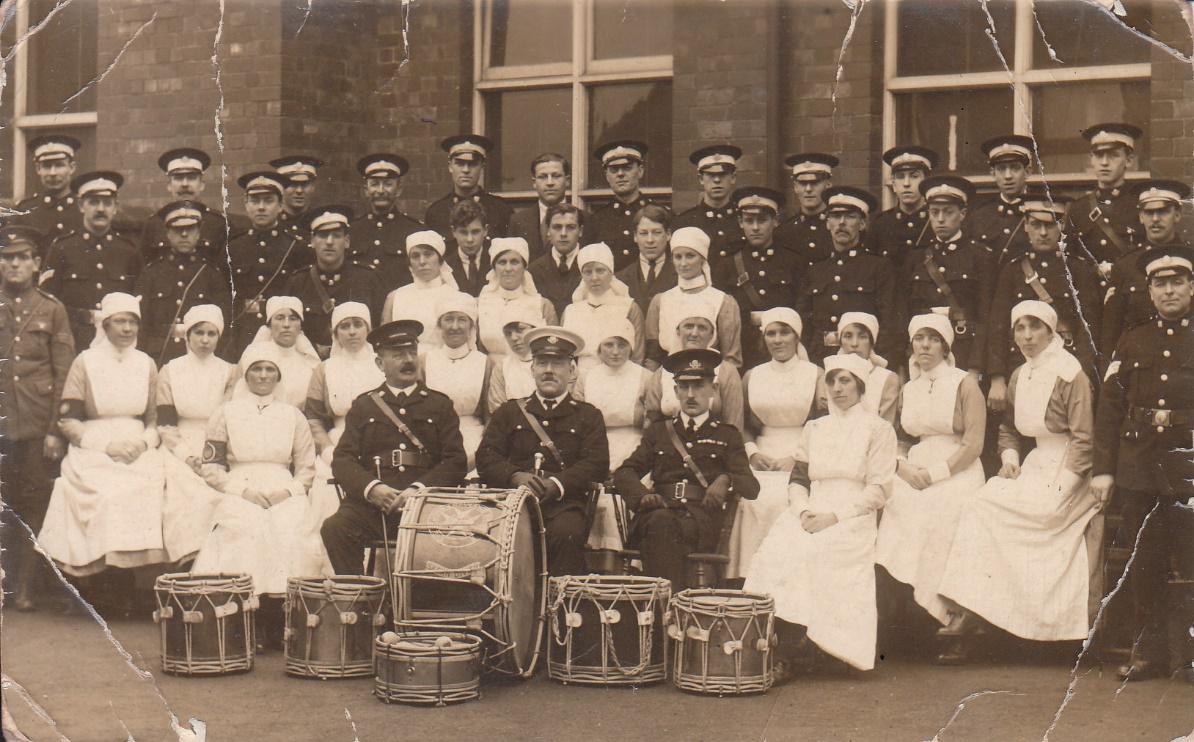 Back to Ilkeston … but a change of life.

It was not long after that, in about 1930, that the Henshaws moved back to Ilkeston. They lived at 30, Archer St. and William worked at the colliery near Cotmanhay. Then, using some of the money he had made over the years as a Collier, William bought a fish and chip business in St. Mary St., Ilkeston. They lived at no. 13, next door to the shop at no. 14. In about 1938, William was able to buy his own house at 24, Whitworth Rd., Ilkeston, where he and Ruth lived until they died, William in 1943, and Ruth in 1947. They sold the fish and chip shop at around the same time and William returned to work as a lacemaker but with the advent of WW II, once again the lace trade collapsed. William took a job at the Ordnance Depot at Bondswell and worked there until he died. The house then passed to Edith, who became a school teacher and married Ronald Spiby in 1936 in Ilkeston.

George first went to school in Thurcroft and then, when the family moved back to Ilkeston, moved to Granby Infants and then Granby Juniors.

He used to take the tram to the parish church, St Mary’s, Ilkeston, to sing in the choir.

It was his singing that changed the shape of George’s life.

We don’t know exactly how it came about, but in 1931 George went to Lichfield Cathedral choir school.

There, in his own words, he learnt to sing extremely well but not much else. 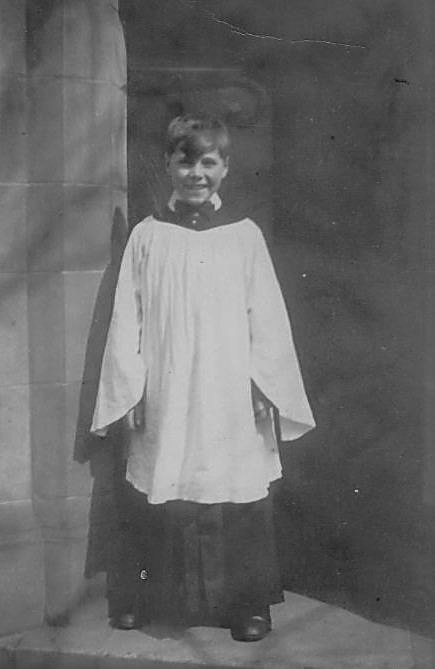 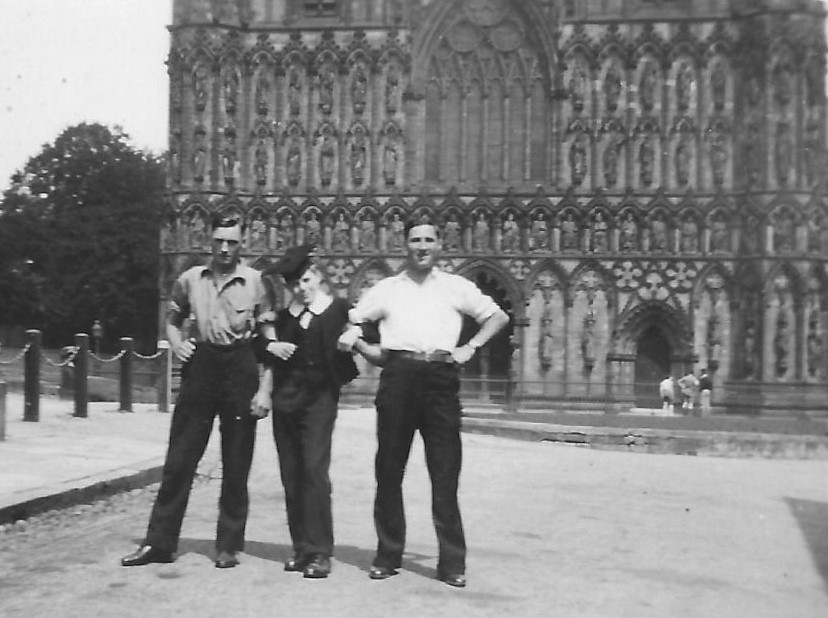 The brothers Henshaw … Fred, George and Arthur outside Lichfield Cathedral

A newspaper cutting, probably from a 1932 edition of an Ilkeston paper, describes a concert at St May’s Church at which George performed alongside his brother-in-law to be, Ronald Spiby and his brother Reg.

The latter left Ilkeston in 1933 to live in Arnold, so the cutting is thought to be before then.

By 1935, George had decided that he wanted to go into the ministry.

The Praecentor of Lichfield cathedral had looked into ways for him to do that on leaving Lichfield, but all possibilities were too expensive, except perhaps by going to college at Newark once he was eighteen.

And so at age 14, George left the choir school and was due to start work as an office clerk in the Ordnance Depot at Bondswell in April 1935.

But before that, a visit to George’s parents changed things very quickly. One regular attender at Lichfield Cathedral services was a man named Spencer Madden. He was unmarried, and lived with two of his sisters in a large house, about half a mile from the cathedral. He was a good friend of the choir school, and used to allow boys to come to his house, to take tea, to play snooker with him, and to play in the grounds of his house. Spencer Madden thought it wrong that George should become an office clerk, seeing more potential in him and arranged to visit George’s parents in Ilkeston, to “make them a proposal concerning George’s education”.

When he arrived at St. Mary St., George was sent into the back room while the discussion took place. The proposal was that he would pay for George to go to Denstone College, then to Oxford to study Theology and thence into the ministry. George’s parents agreed, and a few days later the headmaster of Denstone came to St Mary St. to meet George.

When George sang in the choir in Ilkeston, two other boys had left to go to private schools where the headmaster was a minister, something that George thought unusual. So when he arrived at Lichfield he was particularly interested in one prebend (of 30 or 40 who came to the cathedral for Chapter Meetings). He was Allen Moxon, the Headmaster of Denstone College. When Allen Moxon started the interview with George by introducing himself and said “You don’t know me”, George was able to say “Yes I do!”. The interview went well and, rather than wait until the next academic year, the headmaster was keen that George start at the school immediately and begin the process of catching up on his general education as soon as possible. The decision was taken on Wednesday. Allen Moxon left a list of everything George would need, and over the next three days his mother organised them all. On Friday he was ready for school, with all of his uniform, kit, and other equipment ready and labelled, and Spencer Madden collected him from St Mary St. and delivered him to Denstone by car.

George was in Heywood House at Denstone College for five years, leaving in 1940. He made rapid progress and shone both academically, getting nine credits in School Certificate after three years (the maximum possible), and on the athletics track where he was Victor Ludorum in his last year. He took the entrance exam for St Edmund Hall, Oxford on the 16th April 1940 and went up to Oxford to study Theology in October of that year.

As was the way in the war years, he studied for four terms before being called up. In January 1942, he caught the train to Officer’s training near what is now Alton Towers on a very snowy day. At the station, the cab could not take all of the newly arrived cadets from the station, so they sent their luggage and walked, taking a short cut across the fields that George new from his cross country running days at Denstone College, arriving at about the same time as the taxi. 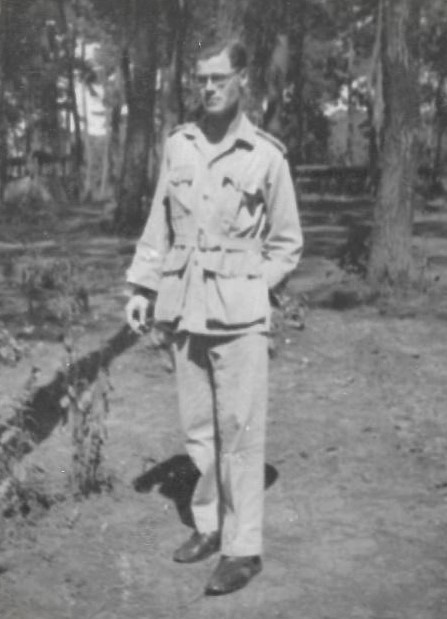