After Mrs. Burgin’s butcher’s shop, adeline remembers “Mrs. Boys’ School for Girls.”
“I remember when I was quite a child say, seventy years ago, knowing a school for girls just below Mount Street. The mistresses’ name was Miss Boys.”

It is probable that Adeline is referring here to Eleanor Boughey, wife of James, who taught in Ilkeston from about 1841.
She was born Eleanor (or Ellen) Padman in 1820 at Swaffham, Norfolk, the daughter of Lincoln-born Wesleyan minister Thomas and Ann (nee Cawston).
According to John Cartwright, Thomas Padman was appointed as Superintendent of the Ilkeston Circuit (Wesleyan Methodist) in 1836, having preceded Mr. Thomas Skelton.

The 1841 census reveals Eleanor as schoolmistress Ellen Padman living with John and Elizabeth Lee in High Street.
(See Dame Schools).
Ten years later she appears in the census in a lower part of Bath Street still under her maiden name of Eleanor Padman, governess. With her are two children of her sister Caroline who had married John Berrie in 1841.

One summer’s afternoon in 1855 Ellen took her young ladies along to the Wine Vaults in East Street, though not to imbibe but to perform.
The landlady victualler Mrs. Elizabeth Bennett had lent her large function room for the occasion and it was filled by ‘a most respected and delighted audience, the majority of whom were ladies’. They were there to hear a selection of sacred dramatic representations from the work of Hannah More (published in 1782) performed by the pupils at Miss Padman’s Educational Establishment.
All the subjects — David and Goliath, Moses in the Bulrushes, Daniel in the Lion’s Den — were taken from the Bible, and the work was ‘chiefly intended for young persons’.
The prologue or introduction to the performance began thus …

Oh for the sacred energy which struck
The harp of Jesse’s son ! or for a spark
Of that celestial flame which touch’d the lips
Of bless’d Isaiah: when the Seraphim
With living fire descended, and his soul
From sin’s pollution purg’d ! – or one faint ray,
If human things to heav’nly I may join,
Of that pure spirit which inflam’d the breast
Of Milton, God’s own poet ! when, ret’d
In fair enthusiastic vision rapt,
The nightly visitant deign’d bless his couch
With inspiration, such as never flow’d
From Acidale or Aganippe’s fount !

Those taking part included the daughters of prominent Ilkeston families including the Taylors, Bennetts, Hives, Barkers and Sudburys and all received the congratulations of the Ilkeston News.
“Considered as a first public appearance or debut on their part, they did all ‘excellent well’, and it reflected the highest credit on their instructor, Miss Padman, as a skilful and experienced teacher”.
The proceedings concluded with the national anthem, which was sweetly sung by the young ladies.
Most of them would be nine or ten years of age !!

On the 1861 census Eleanor Boughey is recorded as a grocer next to the British School in Bath Street. 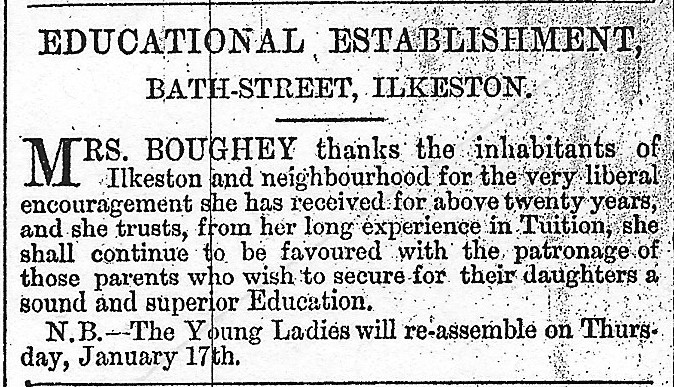 from the Ilkeston Leader January 3rd 1861

Later in that year the Leader had no hesitation in recommending the Bath Street Educational Establishment of Mrs. Boughey, who had over 20 years mature experience as a teacher and who charged moderate fees for the education of young ladies belonging to the higher and middle classes….the best in town!
English Language, History, Geography, Composition and Plain Sewing were all taught.
Prices varied according to age and type of board; weekly boarders for example were charged £4 per quarter.
For an additional fee, Writing and Arithmetic, Ornamental Needlework, Drawing, French, Music with the aid of pianoforte, and lessons in the Art of making wax flowers, were all available.

Interestingly, on the same front page as the above notice appeared, there was another notice just below … 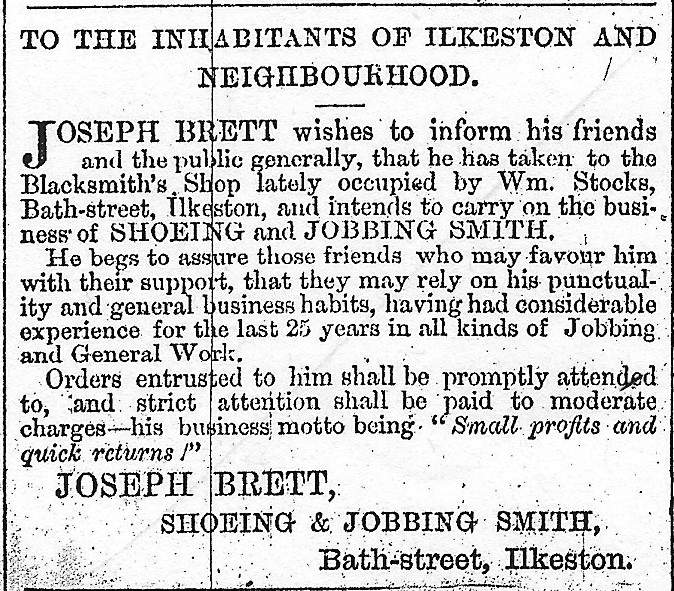 from the Ilkeston Leader January 3rd 1861

Eleanor had married widower James Boughey in June 1859 and when he died, she married again, to Joseph Brett, shoeing and jobbing blacksmith, on March 30th 1866. (The premises mentioned in the advertisement were attached to the Poplar Inn)

With 25 years experience and promising ‘small profits and quick returns’, Joseph had come to Ilkeston from Newthorpe, Nottinghamshire, at the end of 1860 with his then wife Kitty (formerly Bennett), moving into the Bath Street premises vacated by William Stocks.
Kitty died at Eastwood in December 1865 aged 58.

After their marriage, Joseph and Eleanor Brett went to live in Eastwood, where Eleanor had an educational establishment in South Terrace, Church Street.
She continued to teach for 20 years more.

In the summer of 1878 Eleanor received a letter, sent to her in Eastwood, from her younger brother George Webster Padman who was then living in Launceston, Tasmania. The Pioneer printed an extract.

“Since I last wrote you I have had a long journey through our tin mines, between two and three hundred miles over rocks and mountains, across rivers and places where English people would think it almost impossible to ride. In some parts the scenery is magnificent or splendidly beautiful; in others, fearfully grand.
“You travel on a road, from three to four feet wide, cut on the side of a mountain, and look down almost perpendicularly hundreds of feet to the valley below. At Little Thomas Plane, three thousand two hundred feet above the sea, on looking either to the right or left, you get a fine view of the great Pacific Ocean, stretching away for miles, until the blue sea and sky seem to meet and kiss each other. There are many more delightful spots, but I am a bad hand at describing the beauties of Nature, although I can enjoy them.
“ On Easter Monday I drove my wife to Nine Mile Springs, our gold fields – it is about thirty miles from Launceston – returning the next day. There all is activity night and day; the ponderous quartz-crusher, with its twenty head of stampers, is at work; and steam engines are incessantly heard pumping water out of the mines. Just at the back of the hotel where we remained for the night there was one engine going, and within a radius of less than half-a-mile there must be some ten or a dozen mines in operation”.

In July 1879 the Brett couple were living at Number 1 Wellington Street in Eastwood where Joseph had just been appointed as agent for …
“J Berrie, the Manchester Dyer and the largest French Cleaner in England”.
This would be John Berrie, husband of Caroline (nee Padman) and Eleanor’s brother-in-law.

In 1889 Joseph Brett died and his widow returned to Ilkeston to live at 20 Union Road.
However she died at Eastwood on December 29th 1898, aged 78. Two days later the Nottingham Journal reported that she had been lodging with some friends when she was heard to fall downstairs … ‘she was found lying at the bottom, bleeding and unable to speak. Medical assistance was at once called … She died at 10.30 the same morning, never once recovering consciousness.
The subsequent inquest into Eleanor’s death — at which she was described as ‘blind and rather eccentric’ — recorded a verdict of Accidental death.

Adeline directs us, stating that “on the right hand side of Club Row were the boys’ and girls’ entrances to the British School, with two flights of steps”

And close by, two bankrupt tradesmen.