“Next to Mr. Buntings pork shop, which had a window both in East Street and Market Place, was a basement workshop. This was later used by Pat Pollard, tinsmith.
“Next was Pat Pollard, the tinsmith’s house.”

Born in 1829 tin and zinc worker, brazier and gas-fitter Pat Pollard was a son of Cotmanhay cordwainer Thomas and Elizabeth (nee Derbyshire).

Giving evidence to the Children Employment Commission in 1840/41 as an eleven-year-old coalminer at Barber and Walker’s mine at Strelley, Pat stated that he had worked in the pits from the age of nine, had to walk two miles for a six o’clock start, worked until five in the evening with no dinner break, and earned a shilling a day driving the asses.
At that time he had attended St. Mary’s Church Sunday School for two years and could read the Bible.
He had previously learnt to write at the Church day school at which he had paid 6d. per week.

Now no longer a mine worker, Patrick married Sarah Harrison in 1849 and in the same year he established his own Market Place business, having learned his trade from Eliezer Pickburn of Bath Street.

On the 1851 census Pat is living in Bath Street and in the household is his own apprentice, 13-year old Henry Shepherd* (see below).
A year later and the lad was in trouble when he was charged by his master with getting drunk and staying out all night.
The magistrates reprimanded Henry and ordered him to return to his employment — or he faced a month in jail with hard labour!!
Any effects of the reprimand were not long-lasting.
In an early 1853 edition of the Pioneer, Pat was sincerely thanking friends and the public for their support since his commencement in business, and trusted that “by the use of the best materials, combined with good workmanship, promptitude in the execution of orders, and the lowest possible remunerating charges” he would “merit the continuance of their favours”.
Post script; an apprentice wanted immediately!!

And a short while later ….. 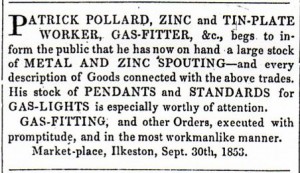 From the Ilkeston Pioneer.  © Trustees of NEWSPLAN2000

One Night a very regrettable but true incident took place in the old (Unitarian) chapel (in High Street).
Pat Pollard, a genial Irishman, who lived in the house next to that occupied by the late Dr. Wood, and carried on the business of a tinsmith, using as his workshop the basement, which was approached from the outside by some steps.
He mended the boiling pans, kettles, etc., for the housewives around, but as he had an incurable thirst, Pat was very often at the Wine Vaults in East Street, and pans, etc., had to wait until he had time to mend them.
One Sunday night, Pat and one of his convivial friends took a bottle of ale…not a modern bottle…and secreted themselves in one of the box pews.
During the early part of the service they were drinking, and when all was quiet, he began to sing, ‘Blest is the man who killeth a pig, and sendeth his neighbour a fry’, etc.
Of course, they were turned out of the chapel, but it was a shock to the congregation.
When Pat’s behaviour became known, people were disgusted, and Pat very soon found it expedient to remove himself and family from the town.

Pat Pollard and his family left Ilkeston for Derby about 1870, where he remained for the rest of the century.
He died there in 1906.
At that time he was a member of the Albion Lodge in the Derby District of the Grand United Order of Oddfellow .. ‘one of its most valued members’.

Patrick’s younger brother by two years was George, who, aged nine, walked to the same Strelley pit as Patrick, did the same work for the same hours and got the same pay.
His education had also followed the same path as that of his elder brother though George could not write.
In April 1856 George walked into the Bath Street chemist shop of George Purcell and purchased a few ounces of oxalic acid. The chemist warned him to take great care with the compound which George said was for use in his trade as a cordwainer. It can legitimately be used to ‘clean’ grubby leather before it is further treated. However this was not his true intention.
George believed that he had recently been ‘spurned in love’ and a quick drink of the acid would relieve his broken heart permanently. But no sooner had the mixture slipped down his throat and the subsequent and severe effects been felt than George realised his mistake. He cried out for help which was fortunately and quickly available.
The cordwainer was saved!!
Within a few years he had left the town for North Shields where he married a local lass.

“After he (Patrick) left, the house was taken by Mr. Francis Sudbury, who became the first Mayor of Ilkeston.
“He married Miss Lizzie Bennett, eldest daughter of Mrs. Bennett, of the Wine Vaults, East Street, and this was their first home.”

The 1871 census shows Francis and Elizabeth Sudbury in South Street where they seem to have spent the early part of their married life. (They married in 1866). All of their children from 1867 to 1874 were born in South Street until the family moved into Market Street. We shall meet them in South Street.

The 1851 census lists Henry as born in Armagh, Ireland.
By the 1861 census he had left Patrick Pollard and Ilkeston behind (temporarily?), moved to Derby, trading as a tinman brazier — and had decided his birthplace was now Ilkeston.
Henry may have been the youngest son of framework knitter John and Hannah (nee Hardy) and when his father was committed to Derby Jail for three months in March 1841, Henry, his brothers Samuel and William, and his mother found themselves in Basford Union Workhouse.
In the mid 1840’s the family had been deserted by father John, and subsequently dispersed throughout Ilkeston.
By the late 1860’s Henry was reunited with Ilkeston and with his now-widowed mother .. but not happily.
In September 1869 he was found guilty of stealing and then pawning a counterpane and pair of sheets belonging to his mother, and was sentenced to six months in Derby jail.

On the opposite corner to the Harrow Inn lived the Walker family…Paul and Eliza, with five sons and four daughters, keeping a combined shoemaker’s shop and post-office. It was next door to the Doctors’ house, probably later occupied by Pat Pollard.

Ilkeston Post Office was established in mid-1841, and for which the people of Ilkeston had to pay £42 annually plus whatever the letters, parcels, etc. would cost. Paul was appointed post master. Previous to this letters were carried by the ‘letter-carrier’ (who else ?!) at irregular intervals, to and from the town … you can see this mentioned in Trade Directories of Ilkeston prior to 1841. For two years this function had been fulfilled by ‘Mr. Wilkinson’, whose character and conduct were by now fully known to the customers, and he was confidently expecting to keep the job when the new Post Office began operations; he had already repainted his gig, got a new horse and incurred other expenses, Alas, Mr. Wilkinson was to be disappointed. The position went to an outsider to the town.
In a letter to the Ilkeston Pioneer (Jan 22nd 1892) ‘Bath Street‘ wrote that ‘the first postmaster, Mr. P. Walker ….  lived in the house now occupied by Mr. A. Sudbury’. In 1891 this was the house numbered 53 Market Place or East Street (depending upon the source used) and was next door to the Doctor’s House…. it was then occupied by butcher Arthur William (or William Arthur) Sudbury, son of William and Mary (nee Gamble).

Paul died on March 1st 1851 and shortly after, this the position was occupied by John Wombell.

Between Pat Pollard and Matthew Hobson’s shop was the Doctors’ House.