We are standing now, where East Street comes out into the Lower Markert Place, looking across at the Borough Arms. Today (2021) Lloyd’s Bank premises are found here. We can see the Town Hall cottages — before their demolition of course !! — across the Market Place from us, at the side of the Sir John Warren Inn.

Adeline is with us and points out that ….“starting from the south side of East Street was Mr. George Bunting’s pork shop.
“The Buntings were supposed to be well off, and it was understood that Chain Row, the row of Cottages on the North side of Derby Road, just below the Toll Bar, was the property of the first Mrs. Bunting.” 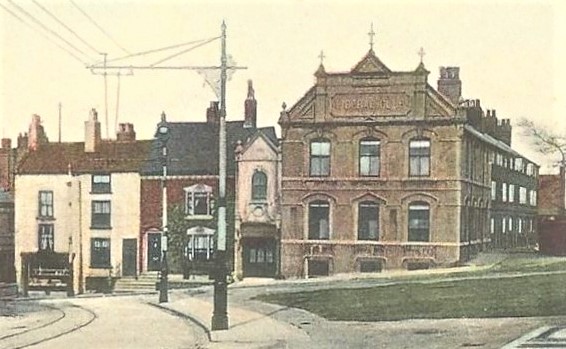 The picture above shows the east side of  the lower Market Place, after the opening of the Liberal Club in 1888. East Street is on the extreme right. Next to it, the white-faced shop, with dwelling-house and outbuildings at the rear would be the premises occupied by George Bunting. Son of calico weaver George and Hannah (nee Gamble), He was born in 1812 at Steeplehouse near Wirksworth. He married Ann Limbert, daughter of lacemaker William and Ann (nee Tow?) on November 11th, 1853 and shortly after, settled in Ilkeston at this Market Place residence. Their one child was Annie Mary born on June 13th, 1855; she later married British School master Henry Frederick Daykin in 1876 and went to live in Little Hallam.
Henry Frederick Daykin was the youngest member of the South Street Daykins.

“After the death of his first wife, who left him with one little girl, Annie, he married Miss Mary Ann Doxey, by whom he had two or three children.”

There were at least five children of this marriage, though the first two — sons William Gaskill and William George — died in infancy.

The only surviving son was George Neville Bunting, born in 1868. At the declared age of 19 he decided to enlist with the Leicestershire Regiment … on October 6th 1886. At that time and for the previous year he was employed as an apprentice at the lace manufacturing firm of Hooley in Long Eaton. 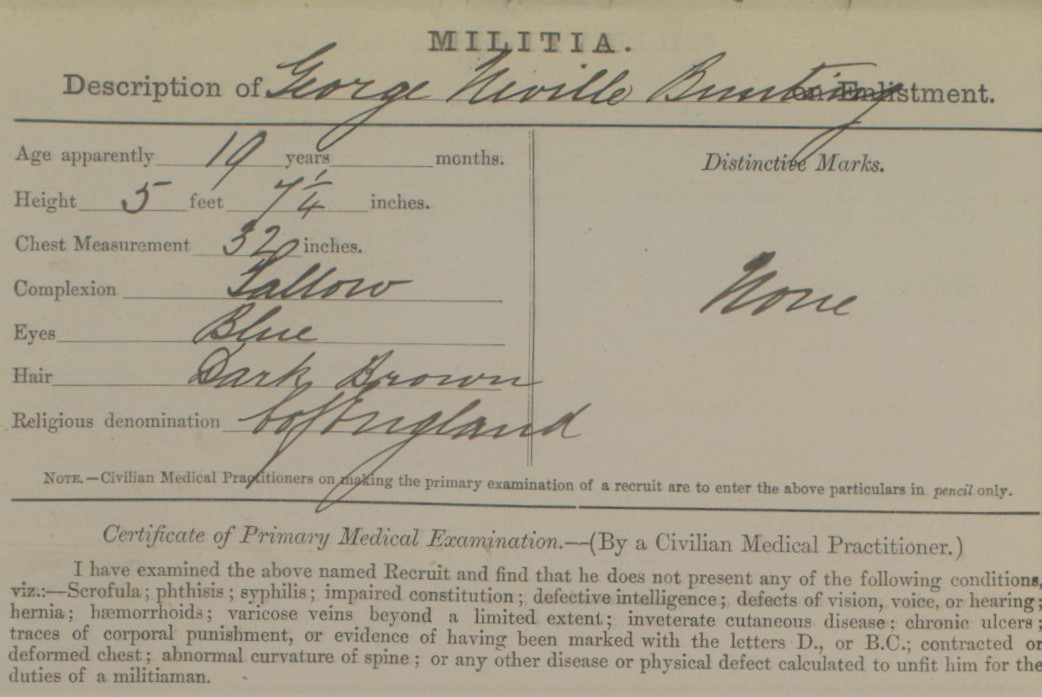 …. the death of George Neville Bunting, the son of  Mr. George Bunting, Long Eaton, has caused much pain amongst those who knew the young man who was a lace hand, and, when the trade became so bad, joined the 1st Battalion Leicestershire Regiment. His death was due to enteric fever at Bermuda. Colour-sergeant Arculus of the F. company in which the deceased was a private. writes to Mr. Bunting sympathising with the family in their bereavement and stating that the funeral was well attended, though the men had to walk about eleven miles. The letter continues:- “His comrades were sorry to have to do such a duty to a comrade so well respected by all as he was. The hospital was about eleven miles away but the men went to see the last of such a dear and good soldier friend. I found out from the hospital people that he passed away quietly. We have lost very many men of the battalion with fever but he is the first from F. Company, and this made the men think more about it. As the colour sergeant of his company I assure you I will see a tomb stone is erected at his grave before we leave Bermuda”.

In the late 1870’s George Bunting left Ilkeston and eventually settled in Long Eaton. He died there, at 14 Friar Street, on January 26th 1892, aged 68.
In December of that same year and from the same address, one of his daughters of his second marriage, Elizabeth Gaskill Bunting, married Kneesall-born farmer William Moseley.

Looking back at the photo at the top of the page, into the Bunting premises, about 1880, moved butcher Arthur William Sudbury (1854-1899), eldest child of William and Mary (nee Gamble) of Oakwell Farm in South Street. He was with his wife, Sarah (nee Tatham), the daughter of Amos and Eliza (nee Bell) and their children. His next-door neighbour, (in the second building with a white fascade) was Edwin Sutton, auctioneeer and valuer. This had once been the home of Pat Pollard.

In 1888 both these houses were put up for auction and were bought by Dr. Robert Wood for £1450. The doctor lived next door in the premises known as the ‘Doctor’s House’ !! The large building on the right is the Liberal Club with Anchor Row next to it.

While living in Ilkeston, for his neighbour George had Pat Pollard.