Below Gregory’s orchard …. and (After Ball’s Yard) the next private houses were in Pleasant Place

Pleasant Place was down what was otherwise called Queen Terrace (at the south side of the Co-op Grocery Hall) …. and if we look to the opposite side of South Street we would see Burgin Yard.

We stand on the west side of South Street, just past what was the Co-op Department Store, and look down the narrow alley there …

There was an opening, and on the land beyond, in Pleasant Place, Mr. William Carrier built four cottages in 1856-7.
They had four rooms and the rent was half-a-crown per week. 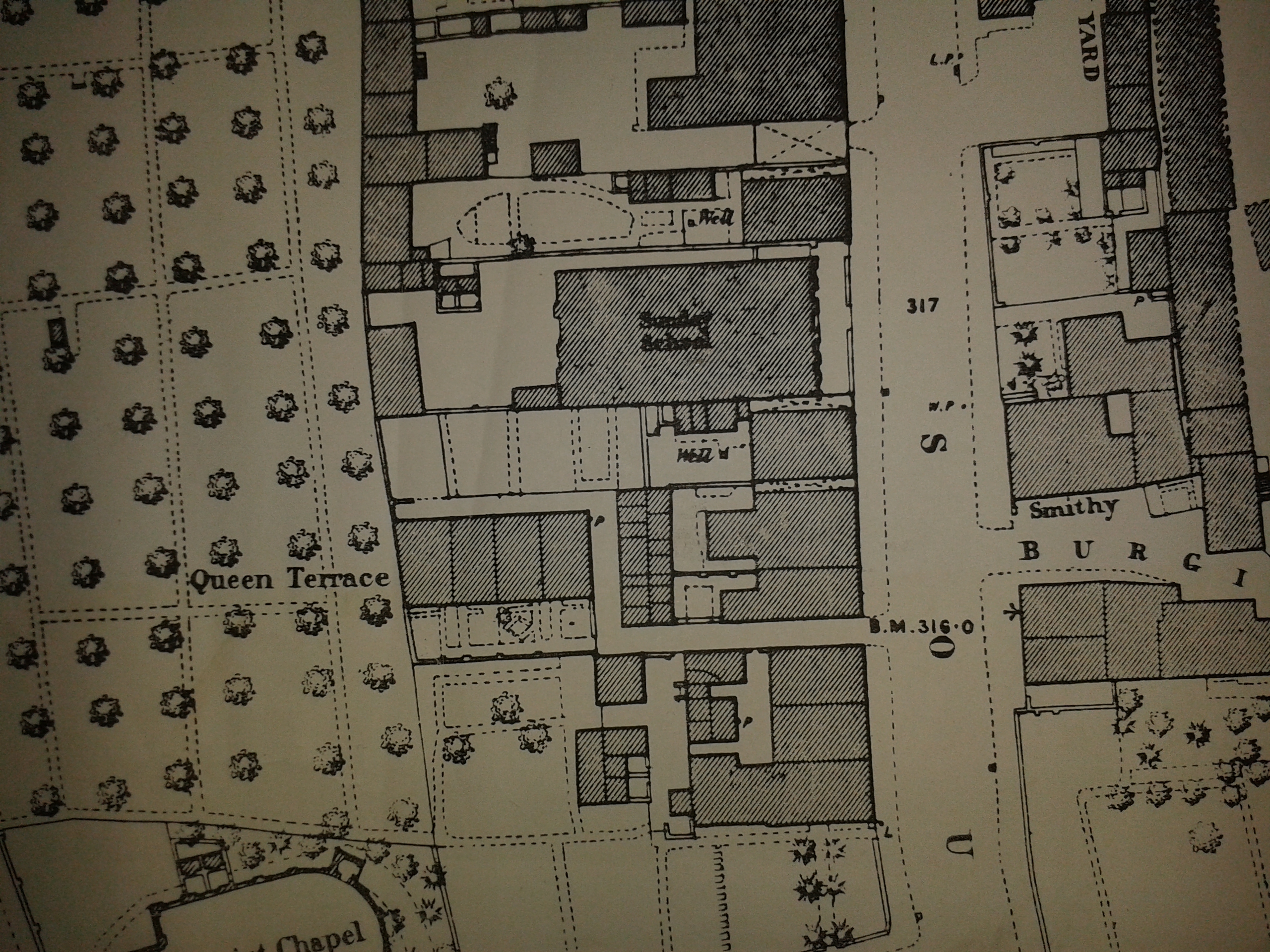 Pleasant Place was also known as Carrier’s Buildings —  four dwellings in Queen’s Terrace, built by William Carrier, son of Henry and Elizabeth (nee Smith), in 1857 —  the year before he died. At his death they passed to his three brothers and nephew Henry MacDonald. At that time the cottages were occupied by John Columbine and family, Mrs. Lowe, John Carrier and family, and George? Spencer.

The first tenants were…..

(nearest Trueman’s orchard) my parents, three children.
The Columbine family — the three children would be John, Adeline and William Brailsford.

Mr. William Campbell, tailor, with two daughters, Lucy and Annie.
The family of tailor William Campbell who was the brother of Abraham Mitchell’s wife Ann.
William married Sarah Elizabeth Outram in March 1848.
Their daughter Lucy was born in March 1851 and Annie was the younger of female twins born in December 1853.
Her older sister by five minutes, Elizabeth, had died as a young child.
We shall meet the family again at the end of South Street.

Mr. John Carrier, smith at H. Carrier and Sons, three sons, John, who became a draper, William and Charlie, who were machinists.
John Carrier who married Mary Starbrook, daughter of agricultural labourer Charles and Elizabeth (nee Weston) in November 1836. He was a framesmith while his oldest son John junior was also initially a framesmith.
Born in 1840, this son married Sarah Beardsley, the illegitimate daughter of Mary, on October 5th 1869 at the Wesleyan Chapel in South Street. He then converted to a draper’s assistant before trading independently in the early 1870’s as a draper at Market House in the Market Place – Number 10 — and later in Bath Street. His mother-in-law was Mary Lowe …. that is, Mary Beardsley who had married grocer Samuel Lowe. (Keep up !!!)

John Carrier’s other sons, William and Charles, were both lacemakers, the latter moving to Long Eaton in the later 1870’s to work there.

Eliza, Ann and Hannah, the daughters of the family, all died in childhood.

The Rev. George Haywood, first-resident Minister of South Street Chapel, one daughter, Sarah, also sister-in-law Miss Bennett.
Miss Bennett worked a stocking frame at Carrier’s. I have gone with Sarah Haywood to see her auntie, who worked at a frame in the north-east of the shop under the archway leading to the engine house.
Son of Abraham and Sarah (nee Mather), George Haywood was born in Belper in 1828 and married there in 1852 to Mary Ann Bennett, the daughter of Joseph and Elizabeth (nee Wigley?)
(Her sister was Sarah E.  Bennett. Her daughter was Sarah Maria Haywood). All were born in Belper.

Kirks lived in Pleasant Place.
The Kirks of Pleasant Place were framework knitter Thomas and Eliza (nee Westby) who married in 1853 and came to Ilkeston from Nottingham at the end of the decade, with children Sarah Ann and Samuel Westby.
Daughters Elizabeth and Ruth were then born in Ilkeston before the family returned to Nottingham in the early 1860’s

At this time Mr. Jas. Butt brought us one horse load of coal from the Manner’s Pit for half-a-crown per load.