We are walking north to south (top to bottom of the below map) along South Street.
On our right we have just passed the Sunday School Rooms, and then the three detached shops.
Then we come to the opening leading to Pleasant Place (or Queen Terrace) 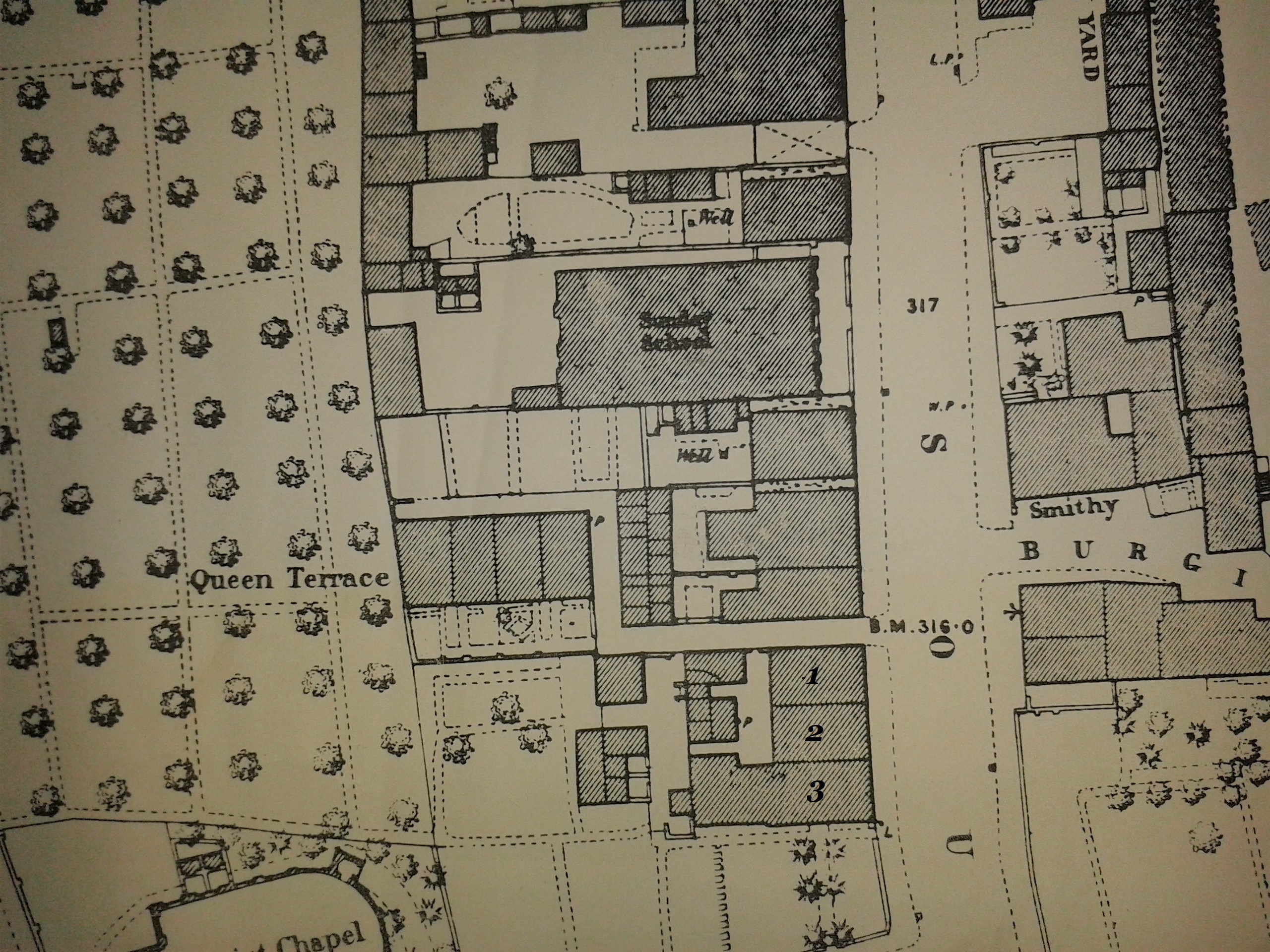 Adeline guides us onto … “South Street, between the opening (to Pleasant Place) and the new Queen Street where there were three newly built shops” … numbered on the map above.

And below is what the three shops looked like in later life, when occupied by the Walker family. They look very similar today, although the open space on the extreme left (at the corner of South Street and Queen Street) has been filled by a new building. 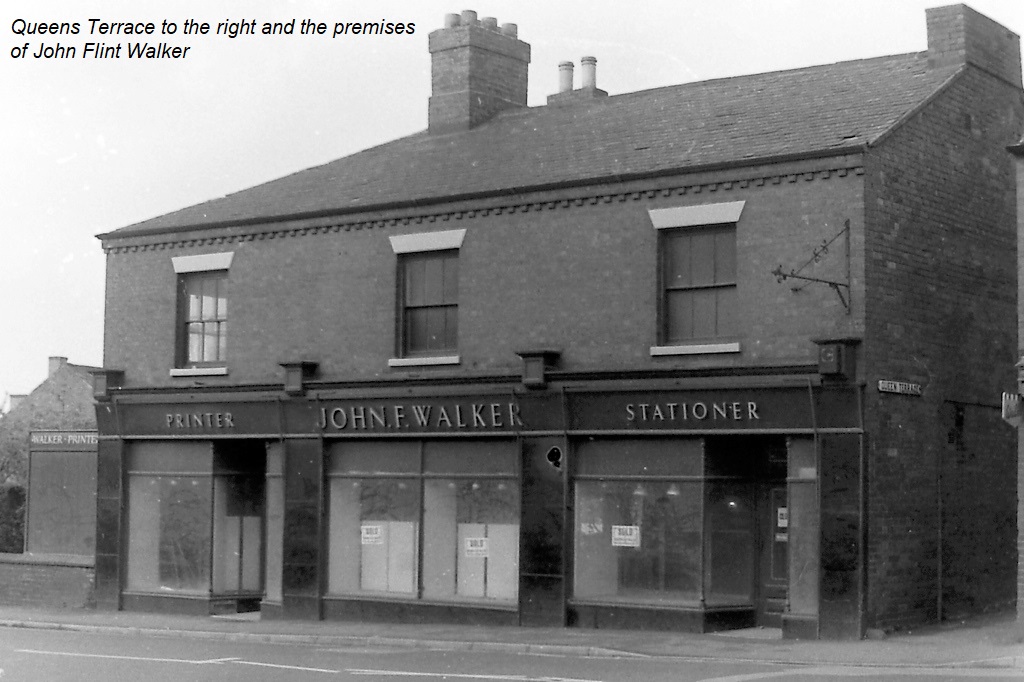 “The first of them was taken by Mr. Joseph Bostock, cooper, with three children. He had a workshop at the rear. The eldest daughter was named Louisa”.

“Mr. Bostock and his family left Ilkeston for Burton in the early sixties”.

Shortly after Phoebe’s birth Joseph, with his family, left for the Horninglow suburb of Burton upon Trent … and lived there for the rest of his life. He died in 1908.

“The next tenant was Mr. Thompson, rope dealer” …. although he wasn’t quite the next tenant, arriving about 10 years after cooper Joseph had left. On the 1871 census the house is occupied by lacemaker William Bryan and his family.

They spent the first years of married life living at Sarah’s home before moving into South Street in the mid-1840’s, accompanied by Sarah’s widowed father. This was on the other side of the street, close to Baptist Chapel Yard.

The family left Ilkeston in the early 1860’s and by 1870 William was keeping the Seven Oaks Inn at Stanton.

The family returned to Ilkeston and by 1874 was living at this location.
William is described in Wright’s Directory of that year as at ‘55 South Street, a fishing tackle manufacturer’.

For several years after this William was in the habit of visiting Scarborough for the good of his health and it was on one of these visits, in August 1885, that he died suddenly. The body was brought back to Ilkeston and two days after his death he was buried at the General Cemetery in Stanton Road.

John Cartwright describes William Thompson as ’the man with big whiskers’. He had been a member of the Local Board.
His wife Sarah died on June 15th 1891, from chronic bronchitis, aged 72.

Adeline thinks that “there was only one son. He married Miss Martha Butt, eldest daughter of the late Mr. James Butt”. In fact there were at least eight children in the Thompson family including four sons.

— Eldest child Eliza married William Henry Keeling, a Staffordshire coal miner, in 1855. After living in north Derbyshire and south Yorkshire the family returned to Bath Street in the late 1870’s where William Henry set up as a clothier and draper, initially at number 73

— Like his father, eldest son Walter was a fishing tackle maker and exported his skills to Sheffield where he settled with his wife Ruth (nee Starbuck) and children.

— Joseph married Emma Smith at Stanton by Dale in 1870 and moved there to live.

— William junior was another fishing line maker, trading in the family shop in South Street, with and after his father.

— Emma married West Hallam coalminer Moses Hartshorn in June 1873 after which she lived there with him.

— The youngest child was Henry, born in December 1855 and it was he who married Martha Julia Butt of Belper Street, eldest child of coal dealer James and Ann (nee Bamford) in July 1875.
Henry also traded in town as a ‘rope and twine manufacturer, seedsman, and fishing tackle dealer’. He followed his brother William into the South Street premises in the late 1880s — by then it was number 22.

In 1889 Henry had a 13-year-old lad named Percy Turton working for him; part of his job was to turn a wheel during the rope-spinning process. One Friday morning in December Percy turned up at the South Street premises, accompanied by Councillor Joseph Scattergood, who had very recently been elected on to the Town Council. Joseph explained that Percy had an injured arm, could hardly move it, and asked if the lad could be ‘given a holiday’ in order to recover. Percy was given ‘sick leave’ and didn’t return until the following Monday, though the circumstances which led up to the lad’s injuries took rather longer to sort out !!

On November 21st, at the culmination of the municipal by-election campaign — the one which was won by Joseph Scattergood — Percy claimed that he had been attacked and beaten with a walking stick by John Parkin, a pawnbroker trading in Bath Street. And it just so happened that John was formerly the secretary of the Conservative Association in Alfreton. The defendant was due to appear at Ilkeston Petty Sessions but asked for his case to be delayed and heard at Heanor; it was suggested, uncharitably, that one reason for this was that the Ilkeston magistrates were Liberals and might be biased ?! The case was therefore heard a couple of weeks later at Heanor — before Conservative magistrates — and John had brought a number of prominant Conservatives from Ilkeston to support him.

At the hearing Percy told how he had been in the town Market Place, vocally supporting the Liberal, when some other boys pushed him into Mr. Parkin. The pawnbroker immediately whirled around and struck the lad two or three times on his left arm. The cross-examination had just begun when the lead magistrate stopped the case — it wasclear to him that the defendant was the first to be assaulted and he had done what every other man would have done — flung his stick round !! This was a frivolous and ill-advised prosecution and the case was dismissed. It took all of 15 minutes.

“The second shop was tenanted by Mrs. West, milliner. Her husband, Jarvis West, worked at Ball’s, in Burr Lane”.

By 1878 John Flint Walker had moved into these premises but in November of that year he moved to 53 South Street. (photo above)
And into No 54 came the Barnes family – joiner William Barnes, his wife Ann (nee Briggs) and children.
Ann had operated her own business for two years and now was selling baby linen and smallware.

“The third shop was taken by Mr. William Green, shoemaker.
Mrs. Green was a sister of Jane Skevington, and Mrs. Kitty Beardsley.
Mrs. Green had been married to a Mr. Cresswell. She had one son, Sam”.

The ‘third shop’ was 53 South Street.

‘Mrs. Green’ was born Eliza Skeavington in 1817, the youngest child of labourer Robert and Elizabeth (nee Garton).
She had several older sisters including Jane  and Kitty. Her oldest sister was Mary who married collier Isaac Gregory senior in October 1821 and so was the mother of Isaac junior.

Eliza had married George Cresswell, boot and shoe maker of South Street, in 1842 and their son Samuel was born in the following year, before George died in June 1846, aged 36.

William Green of Northampton, grocer and shoemaker, was Eliza’s second husband, and after their marriage in February 1850 the couple lived in South Street where their five children were born.

In the later 1870’s the family moved to Nottingham from where they developed an expanding shoe manufactory, employing several workers.

“The Greens had four children.

Elder son William Skeavington Green (born 1851) married Eliza Tatham in July 1875 but less than a year later she died and was buried in Ilkeston General Cemetery. At that time William was a schoolmaster.

With his elder brother William – who had left the teaching profession behind? — Robert Skeavington Green helped his father in the family business. Both sons eventually moved out of  Nottingham city, William to Edwalton and Robert to Attenborough with his wife Mary Caroline (nee McHugh) and daughter Hilda Mary.

c]  Eliza and Sarah … the youngest developed consumption and died after the family went to reside in Nottingham.

As for Samuel Cresswell, Eliza’s son from her first marriage, — he married Martha Howard in 1865.

(See Beyond North Street and Burgin’s Yard and Row).

Traffic Warning 1 … Monday 5.30pm.November 19th 1877.
Travelling in one direction along South Street, the horse and trap of farmer Benjamin Carter, of Church Farm in Stanton by Dale.
Travelling in the opposite direction, the horse and trap of grocer Stephen Keeling of Granby Street.
Result — a violent collision near the South Street shop of John Flint Walker, printer and stationer. (54 South Street)
Severely injured about the head and with a face covered in blood, the farmer was carried into the shop of shoemaker William Green where he was patched up and taken home.
The locality was very dark at this time as the street lamps had not yet been lighted.

Traffic Warning 2 … Monday morning. June 14th 1880.
A smashing South Street Shandy!
A cart ladened with bottled porter, lemonade, etc. and belonging to Bath Street druggist William Fletcher was trundling down the street when the horse slipped, breaking its knees as well as the cart shafts, spilling and smashing the cart’s contents in all directions.
A stream of stout and lemonade flowed down the street…..