After the Poplar Inn … and Thomas Ebbern

The last tradesman on the West side of Bath Street was Mr. Whitehead, who succeeded old Tunnicliffe as the Parish Clerk, who displayed a few bottles of drugs in the window of his small cottage.

Samuel Whitehead’s cottage stood on the site of what was later Bath Street Post Office — in the early years of the 20th century.
(On a couple of occasions Adeline refers incorrectly to Isaac Whitehead as the Bath Street Parish Clerk) 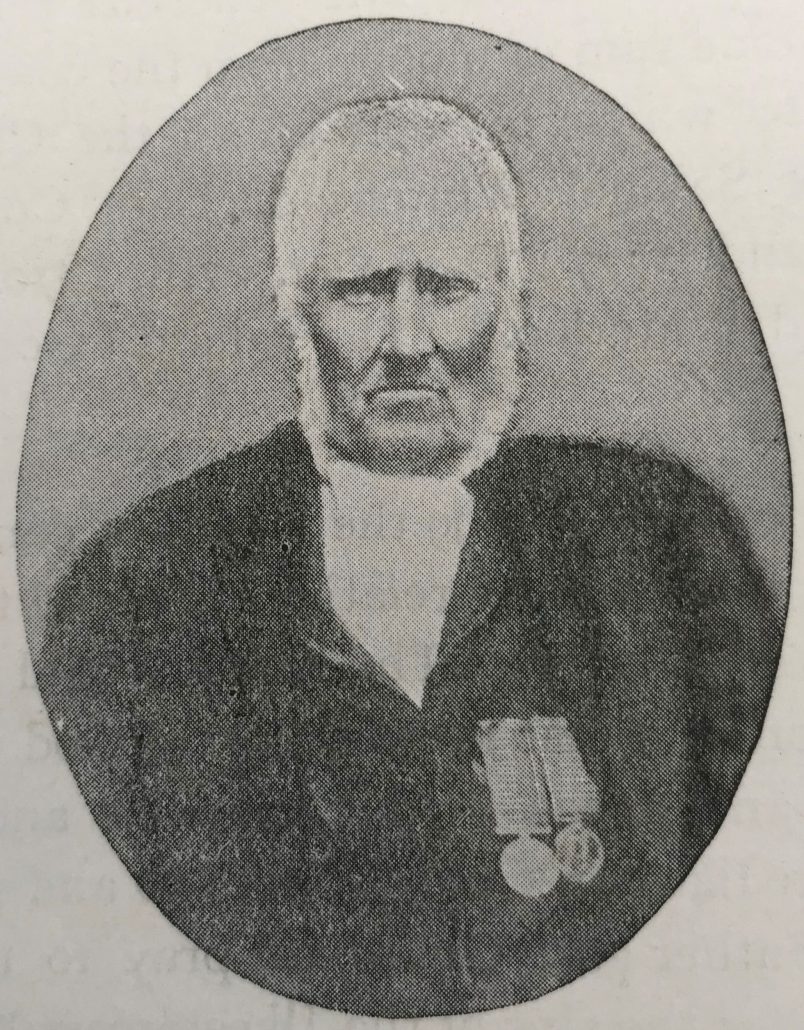 Samuel Whitehead (1777-1870) was an old soldier who fought in the wars against the French Napoleonic forces and was a ‘hero of Waterloo’ (1815).

Samuel's career is briefly described by Trueman and Marston, in the local press and in his army discharge papers…. 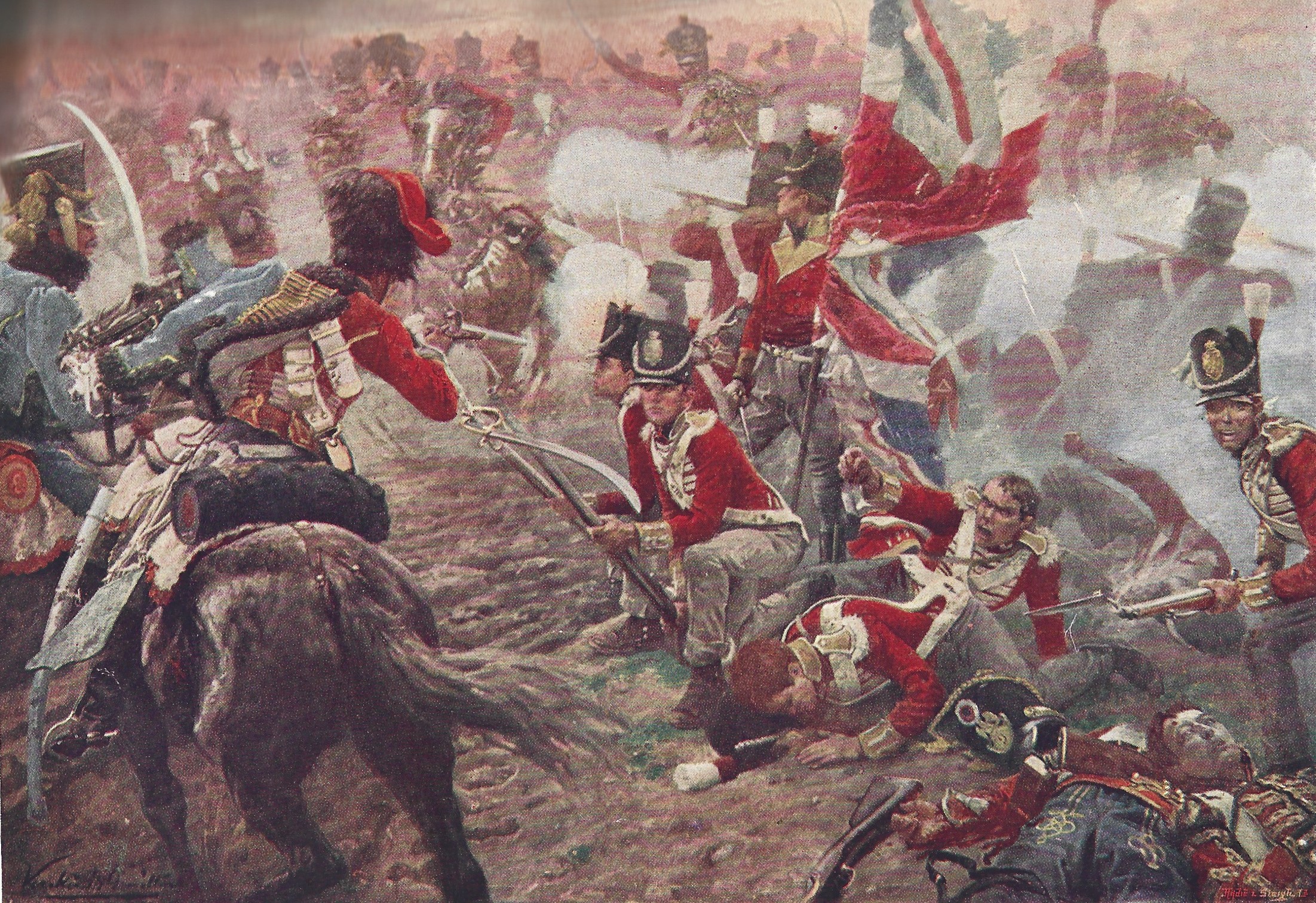 About 1818 Samuel opened the first (possibly) druggist shop in Ilkeston, at the bottom of Bath Street, perhaps trading on knowledge of surgery and medicine acquired when serving in the army.
“He had a great local fame also as one who could ‘charm’ for the canker, and I have no doubt there are many, especially on the ‘Common’ who when young were ‘charmed’ by him or by his notable and most industrious wife”. (Bath Street)

He was a Sunday School teacher under curate Richard Moxon and in 1842 took up the post of Parish Clerk from William Tunnicliffe, holding it until he retired at the end of 1863, soon after the departure of vicar George Searl Ebsworth.
“His excellent reading, and his fine sonorous voice in singing, will not be forgotten by those who attended the Church during the time he was connected to it”.
He was succeeded as Parish Clerk by John Fish.

Educated at Ilkeston National School, their eldest child William “was the first pupil teacher (at the school) and in the town, having been apprenticed in 1847; he was the first trained, and certificated master, in 1854-5”.

William appears on the 1851 Census as a ‘pupil teacher’, aged 18, and in 1860 married Joanna Frost, daughter of Edward and Joanna (nee Bearman) and sister of National schoolmaster William Frost, in 1860.
He was a schoolmaster at the Ilkeston National School before becoming Master at a similar school in Belleau cum Aby near Louth in Lincolnshire where he served for 18 years.
The Pioneer awarded him the accolade of ‘one of the most successful schoolmasters in the Elementary Schools of our country’. (November 1870)
In 1878 William was appointed as headmaster at the Board School at Newthorpe, Nottinghamshire, and on leaving his Lincolnshire school the parishioners there presented him with a purse of 20 sovereigns and an inscribed elegant timepiece.

In January of 1879 his son, Herbert John Whitehead, was appointed by the Greasley School Board as monitor/pupil teacher for the Beauvale (boys) School at a salary of £5 per annum.

William’s younger brother (by almost ten years) followed the same career path as his brother. For many years John taught at the British School in Kimberley, and for nearly forty years both he and his wife, Elizabeth (nee Peach) were headmaster and head mistress at that school. They both retired in 1907.

Born in 1783 Samuel Whitehead’s younger brother Thomas was also a military man, joining the Royal Horse Artillery in 1805 and serving for over 30 years.
He was promoted from gunner, through bombardier, corporal, ‘serjeant’ to ‘staff serjeant’, a rank which he held for the nine years before leaving the regiment in 1835.
He served five years in the Iberian Peninsula, was present for numerous battles in Spain, advanced with the rest of Wellington’s army over the Pyrenees into southern France, fought at the capture of Paris in 1814 and later at the battle of Waterloo in 1815.
He was invalided out of the army, suffering for several years from chronic rheumatism and impaired sight such that he could not read or write without spectacles.
At his discharge Thomas was 50 years of age, described as just over five feet eight inches tall, with brown hair, hazel eyes and dark complexion. A good and efficient soldier, of exemplary character, seldom in the hospital, trustworthy and sober, he showed intelligence and courage in action and his name never appeared in the defaulter’s book.

During his service in the Iberian Peninsula Thomas was surprised to encounter another Ilkestonian there in rather strange circumstances.
After the battle of Corunna (1809) he came face to face with John Calladine, who had been taken prisoner at the battle but had escaped. To flee his pursuers, John had taken off his clothes, tied them in a bundle on his head and had swum across a river. He reached the opposite shore safely but his bundle did not.
Without a stitch of clothing, he was very glad that the first face he saw was the familiar one of Gunner Thomas Whitehead. (as recounted by Bath Street)

John Calladine returned to Ilkeston and for many years kept a ‘tuffy’ shop on Workhouse Hill (Heanor Road).

An army pension was calculated on the basis of the number of years served while over the age of 18.
If someone had fought at the battle of Ligny, Quatre Bras or Waterloo, he was credited with two extra pension years.
Thomas Whitehead thus had just over 32 pensionable years to his credit.

Also living in this area were….

….. one-time neighbours of the Waterloo hero, agricultural labourers George Riley and Samuel Lacey, ‘before whose door the lilac tree bloomed’, both ‘old and faithful servants’ of Samuel Potter of The Park.
Trowell-born George Riley was married in September 1801 to Martha Whitehead – a relative of Samuel?
Samuel Lacey was the son of Richard and Sarah (nee Whitehead) – a relative of Samuel?

…… coalminer John Smith, son of Joseph and Catherine (nee Bostock) and alias ‘Jackilow’  or ‘Jackyloo’ ‘who was popularly supposed to ‘care for no man ten yards off’’ and who was ‘a most irascible man’. (Bath Street) … his father Joseph was known as ‘Joeilow’.

….. ‘Red Sam’ Bostock like ‘Rufus of old, from his hair and complexion’.

(then there were) Other gardens.
Soon we are at old Mrs. Straw’s whitewashed cottage in a garden, facing south.
Sarah Straw was a spinster, and lived with her aged mother. She was a lace mender, and had outdoor work from Carrier’s.

We cross the old line coming from the Manners Colliery.
Slack Road Gardens.

And here is Ilkeston Baths.