The last shop on this side was very old, it belonged to Mr. Sanders, a greengrocer.
It was there as it is at the present time.

William Ι
We are now at 31 South Street, about to turn the corner, right, into Derby Road.
On this corner are some thatched cottages and shops which were held by William Sanders, gardener, in the early years of the nineteenth century.
He married Ann Raynor in October 1786 and the couple had at least ten children including Anne (born 1791), William the second (1796), Jenny (1801) and George (1809).

William ΙΙ
The properties then passed to son William the second though he surrendered some of them to his older sister Anne who lived in one of them until she died unmarried in March 1826.
The 1841 census shows William the second, also a gardener, living there with his wife Lucy Sargeant (nee Mills) whom he married in March 1821. She was the daughter of William and Lucy Ann Paradise (nee Sargeant)…. note these names.
With them are daughters Mary Ann (1822), Elizabeth (1828), Sarah (1834) and Harriet (1837).
Lucy was then pregnant with the couple’s first and only son — William the third — born later that year.
William the second’s brother, George, a cordwainer, is in another of the dwellings.

The only other living sibling was Jenny Sanders who had married Joshua Harrison, framework knitter, in 1840 and was at Kensington.
Brother George later went there to live with Jenny.

After the death of William the second in 1860, his widow Lucy Sargeant continued to live in South Street with daughter Harriet and son William the third until her death in February 1863, aged 66.

William ΙΙΙ
A few months later Harriet Sanders married coalminer Robert Bircumshaw and moved around the corner into Derby Road leaving William the third occupying the South Street home.
He was still there at the end of the century, with his sister Harriet always close by.

His living and domestic arrangements suggest that William the third was very content in this area. He married twice and found both wives without venturing very far.

First wife Charlotte Henson whom he married in 1870 had been living across the road in Trueman’s Court, off the east side of South Street, with her parents, Loughborough-born boatman William and Elizabeth (nee Kitts).
Charlotte died in Derby Road in December 1877, aged 32.
William’s second wife Jane Flint was the youngest child of shepherd George and Anne (nee Ford) and had lived ‘up the road’ in  South Street, although at the time of her marriage in July 1881 she was with her brother William in Stanton Road.
Jane lived in these premises for the rest of her life and died at what was then 66 Derby Road on New Year’s Day 1897, aged 46.
Husband William died here in May 1908, aged 66.

A couple of doors away was William’s sister Harriet and husband Robert. 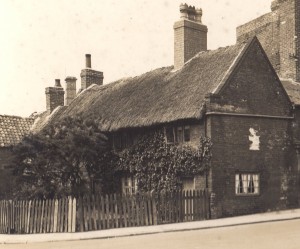 Thatched cottages at the corner of South Street (to the right) and Derby Road (to the left), about 1933. (courtesy of Ilkeston Reference Library). 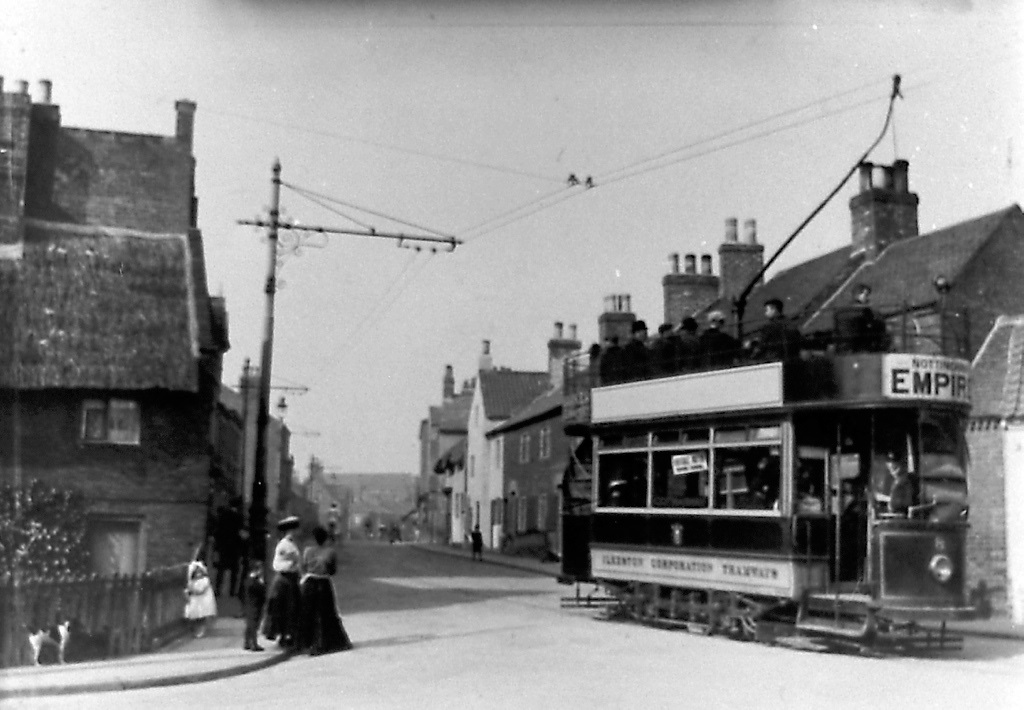 And here we are looking back along South Street … on the left are all the premises we have visited, including the Sanders home (extreme left), …… and on the right, houses we will visit later in the journey (the East Side of South Street).
We could hop onto the Number 12 tram ? (c 1910, on its way from the Station Road terminus ?)

Heidi Elbediwy  has discovered some interesting detail ... I have done some more research on the Wheeldon and Sanders families. I discovered that William Sanders who lived at the old thatch cottage had a small zoo in the back garden with a monkey which liked to ride on the back of dogs. Also I found his rents and property logs which showed that a lot of his tenants were gardeners like him, but I would assume this meant there was land to maintain rather than just maintaining other peoples garden. With the Wheeldon family I found that William George Wheeldon was a silk manufacture and owner of the business. His father Amos worked as a silk maker but as far as I know did not own the factory so I am really curious how this came about

William George Wheeldon, son of Amos and Sarah became a silk and lace manufacturer and owner with two factories one on North Street the other on Albert street. He sold both to a London company. (In his file at the local studies library were Alice Wheeldon the Derby suffragette who was accused of trying to kill Lloyd George paper cut outs and information, when I asked why I was told it was because they are of the same family, I have yet to find this to confirm). Also John Sanders Wheeldon a grandson of Amos and Sarah, was killed in the WW1 while fighting in Palestine. He is buried in modern day Israel at Ramla at the war cemetery. He was in the 1/5 Sussex Regiment and part of the Egyptian Expeditionary force EEF he was killed in 1918. I am looking into his story and will update you. He is on the war memorial in Ilkeston market place.

I have found some of the (Wheeldon) family did live in Belper which is where the father of William Augustus Wheeldon (the father of Alice Wheeldon) was from. I clearly need to keep investigating so I can prove it one way or the other. John Sanders Wheeldon …his mother and father William George and Mary signed for his belongings which were returned to the UK after his death. I am currently trying to find his story too, I’m waiting to hear back from the battalion with any information they may have. When I get any information I will let you know.
[email protected]