The Birch family (by John Daykin)

So, before we enter Weaver Row …

Samuel Birch was baptised on the 17th October 1710, to Rich. Birch and Elizabeth, according to Derbyshire church records.

He married Thomasine Woodward on the 14th December 1749 at St. John’s church, Smalley Derbyshire, where Samuel is described as… “Samuel from Mapperley”… Thomasine had been christened on the 26th February 1715 at Smalley to Thomas and Mary Woodward.

Thomasina Birch (nee Woodward) was buried in the graveyard at All Saints church Kirk Hallam on the 3rd February 1767, as recorded in the church transcripts.. And according to the inscription on her headstone she was aged 53 years.
It is not known where or when Samuel Birch was buried as there are records of several Samuel Birch’s, being buried.

According to the transcripts of the All Saints church at Kirk Hallam, Samuel Birch (Jnr.) (Weaver) married Mary Martin (both of this parish) on the 30th May 1776 and are recorded as having several children;

He was born in Kirk Hallam and was baptised at All Saints Church Kirk Hallam on the 11th June 1753 to Samuel and Thomasina Birch (nee Woodward) and was the second eldest of five recorded children.

Richard Birch was a carpenter by trade and he married Elizabeth Beardsley at All Saints Church in Kirk Hallam on 25th September 1777 … “BIRCH. Richard (Carpenter) = BEARDSLEY. Elizabeth, both of this parish, by Licence”…. The service was performed by George Aller (Curate), witnessed by William Lacy and John Grundy.

Apart from the church transcripts regarding Richard’s marriage to Elizabeth and their children’s baptisms there is very little documentary evidence relating to him or his family apart from the inevitable records of their deaths.

Richard Birch was a member of the Wesleyan Methodist movement, as it is recorded that following John Wesley’s visit to Ilkeston in the late 1700’s a Wesley mission was formed and met in members homes. By 1795 a Meeting House or Chapel had been established in Burgin’s Yard, owned by bachelor wheelwright John Burgin-Richardson, who in 1786 had sold 120 square yards of his Burgin croft to the builders of the Chapel. The building was completed by April 1787 and Richard Birch was amongst several members whose names were added to the trustees.

Elizabeth Birch (nee Beardsley) is believed to have died in 1806, as according to the All Saints church transcripts at Kirk Hallam … “BIRCH. Elizabeth, age 65, the wife of Richard”… was buried in the graveyard on 16th November 1806 aged 65, so one can assume that this was Richard’s wife.

The children of Richard and Elizabeth Birch (nee Beardsley)

Richard and Elizabeth Birch (nee Beardsley) had two children previous to their marriage, as according to the church transcripts at All Saints, Kirk Hallam a pair of twins had been baptised on August 25th 1775. The infant John only survived  a couple of days and was buried on September 3rd 1775. There are no further entries mentioned for the other twin Ann in the church transcripts.

Richard and Elizabeth Birch (nee Beardsley) had another son following their marriage on September 25th 1777 —  Samuel, born on October 25th 1777, who was baptised on November 2nd 1777 at All Saints Church Kirk Hallam.

Samuel followed in his father’s profession, becoming a joiner and married Elizabeth Thompson on February 24th 1799 at St. Mary’s Church, Ilkeston. Samuel and Elizabeth had a son named Richard who was baptised on October 9th 1803 at All Saints Church.

Sadly, Samuel’s wife Elizabeth died when aged only 29 years and was buried at All Saints churchyard, Kirk Hallam on May 14th 1806. Samuel Birch re-married on July 27th 1812 Eleanor Shardlow at St. Mary’s, Ilkeston.

In the 1841 census taken on June 6th for South Street, Ilkeston, Samuel is listed as the head of the family, aged 63 and a joiner by trade. The family consists of his wife Eleanor, aged 50, and three of their daughters; Elizabeth, aged 28; Mary, aged 21 and Eliza, aged 19.

On the website “www.oldilkeston.co.uk” there are further annotations for each family listed in the census, with Samuel Birch; 2nd marriage / wid of Elizabeth (Thompson) mar 1799/ of Richard and Elizabeth (Beardsley) mar 1777; Eleanor Birch, nee Shardlow mar 1812 / of John and Sarah; Elizabeth, 28, Mary, 21, Eliza, 19; all of Samuel and Eleanor (Shardlow) mar 1812.

In the 1851 census taken on March 30th for South Street, Ilkeston, Samuel is listed as the Head, aged 73 and a Joiner and Carpenter by trade, living with his wife, Eleanor, aged 58, born in Duffield and two of their daughters; Eliza, now a 28 year old Dressmaker, and Thomasin, aged 16; both unmarried and born in Ilkeston.

There was a mention in “White’s 1857 Directory of Derbyshire Morleston & Litchurch Hundred”, which was a listing for the various tradesmen; … “JOINERS – Birch Saml. South Street, Ilkestone”…

According to the “National Probate Calendar (Index of Wills and Administrations)”… “BIRCH Samuel Effects under £600. 23 May. The Will of Samuel Birch late of Ilkeston in the County of Derby Carpenter deceased who died 15 April 1859 at Ilkeston aforesaid was proved at Derby by the oaths of Thomas Hurst of Kimberley in the County of Nottingham Gentleman, John Mellor of Ilkeston aforesaid Butcher and William Gregory of the same place Engine Driver the Executors”… 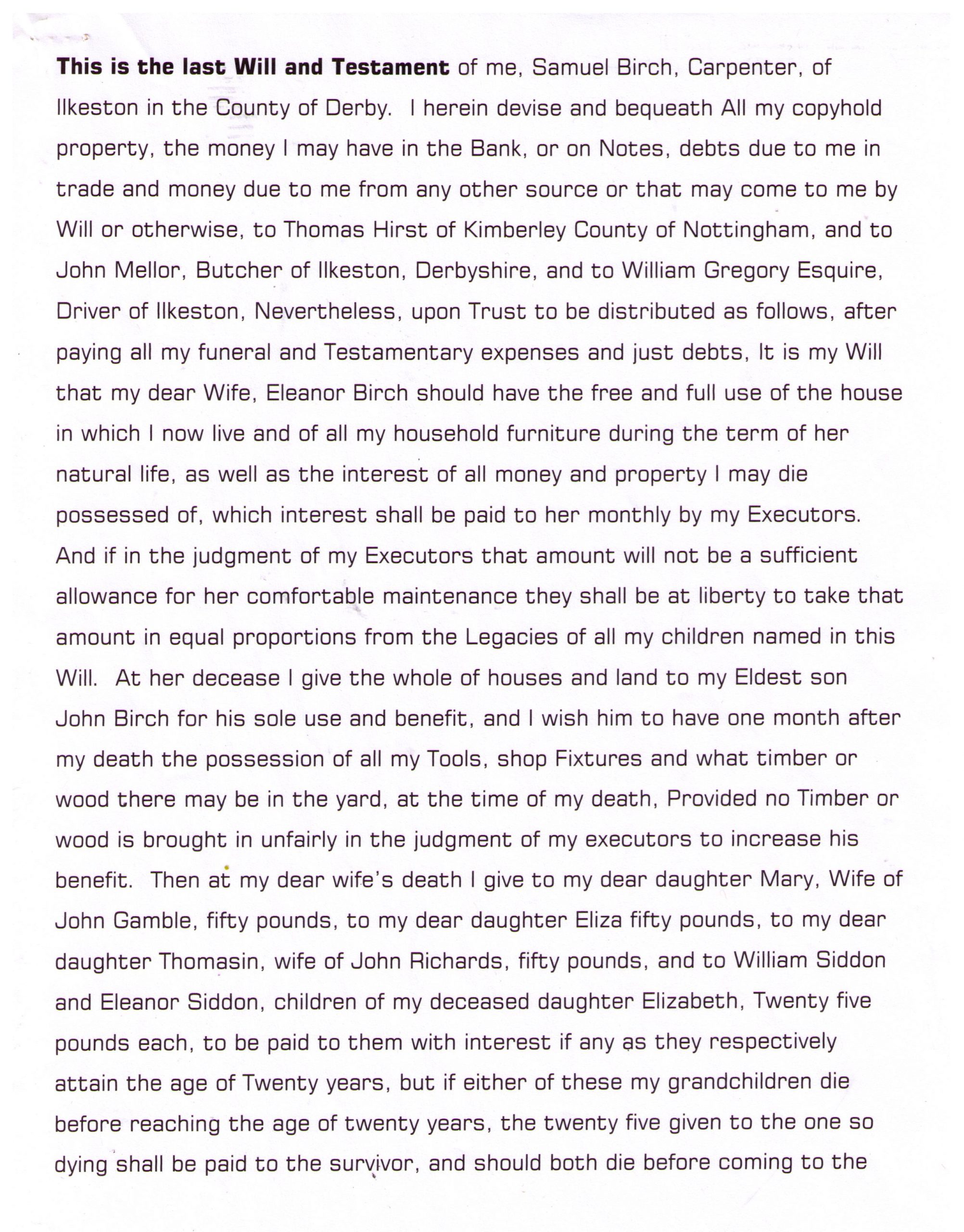 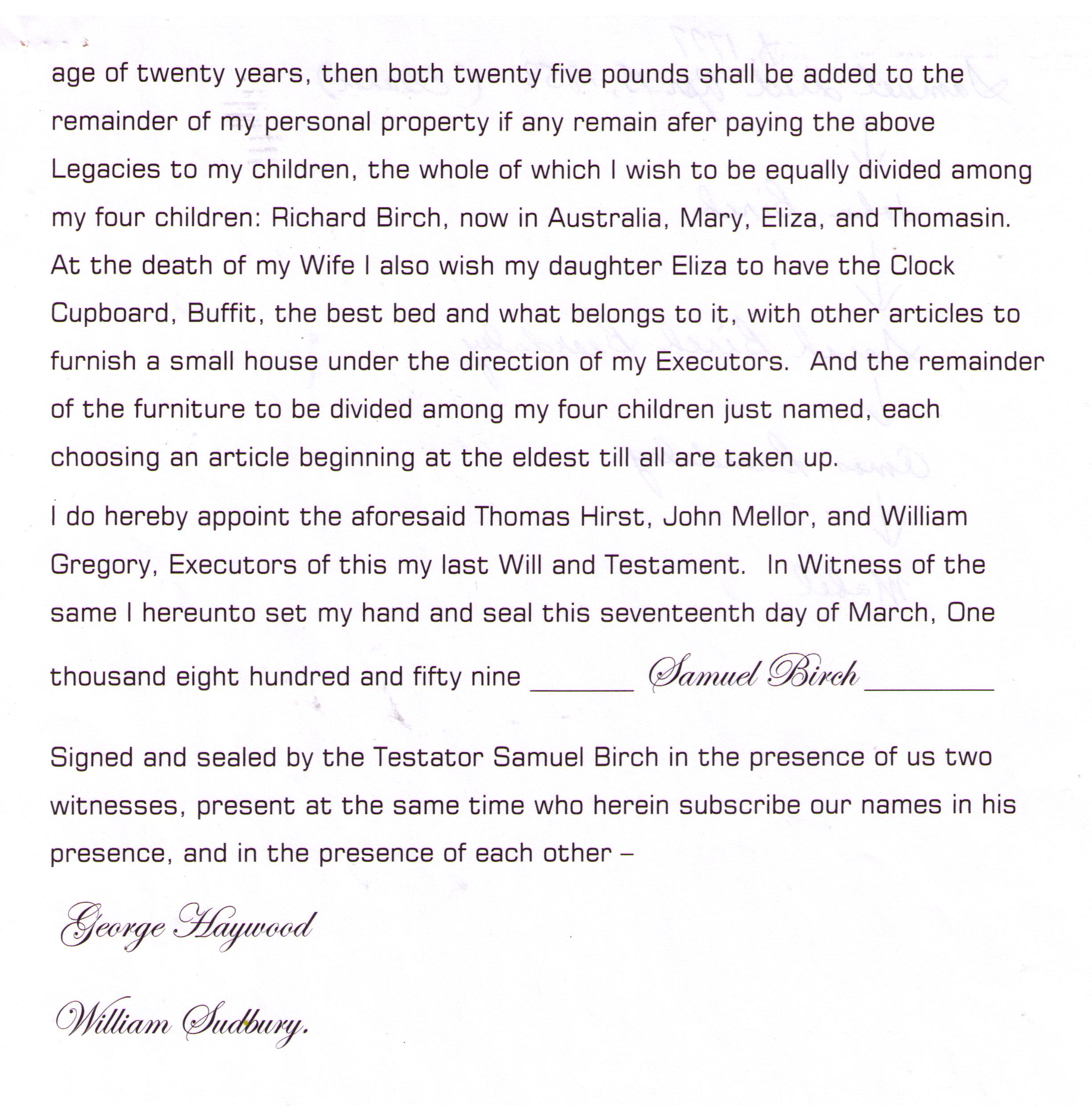 Samuel’s widow Eleanor Birch (nee Shardlow) was still living in South Street at the time of the 1861 census on April 7th, now the head of the family, a widow, 68, born Duffield, living with her unmarried daughter Eliza, 38, a dress maker, born Ilkeston, but sadly Eleanor died the following year on the 25th December 1862, and was buried on December 27th 1862 along with her late husband Samuel in St. Mary’s church graveyard Ilkeston.

Eleanor had been born on February 6th 1793 and over the following years she had eight children with husband Samuel —
— Matilda, baptised on October 3rd 1812;
— John on July 17th 1814.
He followed the family tradition of Joiners and carpenters in South Street and married Sarah Wagstaff in the June quarter of 1839 (May 23rd 1839 at Trowell Parish Church)

A copy of the marriage certificate, kindly sent in by Pam Bates

John is recorded in the 1841 census on June 6th living as a 25-year-old Joiner Journeyman at South Street, adjacent his parents, along with his 25-year-old wife, Sarah, born Stanton (c.1816) and two children; Elizabeth, age 2, born Trowell March quarter 1839 (January 7th 1839) and Ann (Hayden) age 3 months, born June quarter in Ilkeston (March 12th 1840), who died December 30th 1847 age 6, and was buried on January 2nd 1848.
There are more annotations to the 1841 census on the website “www.oldilkeston.co.uk” with further information… “John Birch, of Samuel and Eleanor (Shardlow) mar 1812; Sarah Birch, nee Wagstaff mar 1839 of Thomas and Betty (Lacey) mar 1809; Elizabeth, 2, aka Elizabeth Wagstaff illeg d of John Birch and Sarah Wagstaff; Ann, 3 m. aka Ann Hayden Birch of John and Sarah (Wagstaff) mar 1839”…
In the 1851 census on March 30th the family still resides in South Street, with John, 36, Sarah, 39 and their children; Elizabeth, 12, who died June 13th 1853 age 14,  and was buried at Kirk Hallam on June 16th; Sarah, 7, born December quarter 1844 (Ref. Basford 15 412), Samuel, 5, born June quarter 1846 (Ref. Basford 15 509), who died 13th November 1862 age 16; Richard, 2, born June quarter 1848 (May 11th 1848) and Mary, 11 m. born June quarter 1850 (Ref. Basford 15477/518); all except for Elizabeth born in Ilkeston.
By the time of the 1861 census on April 7th, Sarah was a Straw bonnet maker, while Samuel, Richard and Mary were all Scholars.
Sarah married baker Amos Beardsley on October 20th 1863.
Mary Birch married Thomas Ebben at Ilkeston St. Mary’s on March 3rd 1872… “Thomas Ebbern, 25, butcher, born Ilkeston, father, Frances (sic), farmer, witness John Birch, Mary Birch, 21, born Ilkeston, daughter of John, joiner, witness Frances Amelia Ebbern”…
Thomas traded as a butcher in South Street and in later life he and Mary retired to Cossall where he died at Poplar Farm in 1907.
Mary died in March 1931 and is buried at Kirk Hallam Church, as many of the Birch ancestors are.
“Dick” was of course Richard Birch who was married on February 5th 1871 at Ilkeston St. Mary’s.
… “Richard Birch, age 22, joiner, born Ilkeston, father John, joiner, witness Edmund Turton, Mary Locker, 27, born Ilkeston, daughter of William, boatman, witness Mary Locker”… After the wedding the couple went to live in Brook Street, Long Eaton where Richard worked as a carpenter/ woodworker and railway wagon builder. The family returned to South Street in the 1880’s, and eventually settled at Ivy House, 40 Station Road. Mary died there in November 1919, aged 78, and almost two years later was followed by Richard aged 73.
Eliza Birch lived mother Eleanor (nee Shardlow) at 44 South Street until the latter died on Christmas Day 1862, and she continued to live there up until her own death on October 25th 1871 aged 48, after which she was buried at Kirk Hallam.
Sarah Birch (nee Wagstaff) died at South Street on February 27th 1877 age 66  and her widowed husband John Birch died also at South Street aged 74 on February 20th 1889, having suffered from chronic bronchitis for many years. John had actually made his own coffin and left request that when he died his body should be placed in it immediately and left in his South Street workshop until his burial. He was buried on the 20th February 1889 in the same plot as Sarah at All Saints Kirk Hallam, to the left as you pass through the entrance gate.
The will of John Birch was recorded in the “National Probate Calendar (Index of Wills and Administrations)… “BIRCH John 9 March. The Will of John Birch late of Ilkeston in the County of Derby Joiner who died 20 February 1889 at Ilkeston was proved at the Principal Registry by Richard Birch Joiner the Son and Sarah Beardsley (Wife of Amos Beardsley) and Mary Ebbern (Wife of Thomas Ebbern) the Daughters all of Ilkeston the Executors”…
— Ann on April 3rd 1816;
— Mary, born c. 1820 who married John Gamble at Ilkeston St. Mary’s on March 20th 1844…
“John Gamble, sink maker, born New Radford, Notts, son of Thomas, sink maker, witnesses, Thomas Gamble jnr/C? AS Gamble, Mary Birch, born Ilkeston, father Samuel, joiner, witnesses, Eliza Birch/Lydia Gamble”…
— Eliza, born c. 1822, had lived with her mother Eleanor in a row of back to back cottages facing Warner’s Yard, and built by the same, which in 1871 was number 44 South Street (east side) up until Eleanor’s death on Christmas Day 1862 and continued to live there, working as a dressmaker up until she died on the 25th October 1871 .
— Sarah was baptised on February 25th 1827 but died shortly after and was buried three days later on February 28th;
— Richard, baptised on  August 10th 1828
— and finally Thomasina, baptised on August 31st 1834, who went on to marry John Richards on December 13th 1853 at Ilkeston St. Mary’s …“John Richards, lacemaker born Ilkeston, son of Samuel, miner, witness Samuel Richards, Thomasina Birch, born Ilkeston, daughter of Samuel, joiner, witness Sarah Richards”…

Of the eight children born to Samuel and Eleanor Birch, it was their eldest son, John who featured more prominently in the ensuing lives of the Birch’s and Daykin’s in 19th century Ilkeston.

Richard and Elizabeth’s second daughter, Elizabeth (Betty) was baptised on November 7th 1779 at Ilkeston… “to Rich Birch and Eliz.”… Elizabeth went on to marry carpenter and joiner Benjamin Hollingsworth at Kirk Hallam All Saints church on January 3rd 1811…

“HOLLINGSWORTH. Benjamin = BIRCH. Elizabeth, both of this parish, by licence”…

Elizabeth and Benjamin are known to have had a son, Edward Hollingsworth, born on January 17th 1814, who was baptised on April 17th 1814 at the Wesleyan Methodist Church, Ilkeston  before Elizabeth died prematurely the following year. She was buried at Kirk Hallam All Saints Church on April 12th 1815 and the memorial inscription on her headstone says simply… “April 12th 1815 HOLLINGSWORTH Elizabeth age 35 (Wife of Benjamin)”…

Richard and Elizabeth Birch’s youngest daughter was Sarah, baptised on March 10th 1782 at Ilkeston St. Mary’s Church… “Of Richard and Elizabeth”… Her life is well documented following her marriage to Samuel Daykin on November 5th 1804 at Kirk Hallam All Saints Church.

As John Daykin points out in his last section, there is a connection between the Birchs of South Street and the Hollingworth family. This latter family has been extensively explored by Simon Hollingworth, who has shared some of his research …. we can see it on the next page.