“The old Cricket Ground Chapel was the home of the Old Wesleyans. It was built in 1786.” … a chapel with which Adeline was most familiar

She dates the chapel from the year that John Wesley travelled the ‘miserable roads’ on his visit to Ilkeston.

After this visit to the town a Wesley mission was formed and met in members’ homes, and by 1795 a Meeting House or Chapel had been established in Burgin Yard. This Yard was on the opposite side of South Street to Queen’s Terrace– as you entered the Yard from South Street — at what is now the junction of that street and Coronation Street – the chapel was at the far right end of the Yard. It was approximately on the site of the Ritz Bingo Hall car park.

In his Pioneer articles, Waterhouse states that the chapel was built on land, previously part of the ‘Burgin premises’ and owned by bachelor wheelwright John Burgin-Richardson. He was the oldest surviving son of farmer and blacksmith Robert and Sarah (nee Henshaw) and the grandson of Thomas Richardson and his wife Elizabeth (nee Burgin). In 1786 John sold 120 square yards of his Burgin’s croft to the builders of the chapel, thus supporting Adeline’s date of founding.
Waterhouse continues…….
“It may interest Methodists to know the founders of this chapel; they were Samuel James*, Micah Willcox**, John Lees and William Jackson, all of Ilkeston. By April 1787 the chapel was built and Richard Birch and Samuel Cowley of Ilkeston, Thomas Salt and Henry Taft of Stanton-by-Dale were added to the trustees”.
This was Adeline’s ‘Cricket Ground Chapel’, a name which it probably acquired several years after it was built — the actual Cricket Ground dates from many years after the building date for the chapel.
*Samuel James was a mercer (a textile trader) and the father of Ann Dorothy James and Thomas Roe James (See On the east side). He was also one-time owner of the King’s Head — the one at the southern corner of East Street and not the Market Place inn of the same name.
**Micah Willcox was one-time keeper of the White Lion Inn

Bagshaw’s Directory of 1846 states that “in 1838 his grace the Duke of Rutland had given two and a half acres of land for a cricket ground (to the south of St. Mary’s Church) and half an acre of land in front of the church to enlarge the market place. From the latter an old farm house and cottage were taken down, and the refuse soil taken to level the Cricket Ground, which is allowed to be equal to any in the kingdom”.

This Cricket Ground Chapel was the first Methodist Chapel erected in Ilkeston. A story passed down through time was that the women of the chapel, ‘in their zeal consented to carry the bricks for building it; and the principla beams, which were 0oak, were cut out of Cotmanhay Wood, and given by the wood steward to the Duke of Rutland’. (IP Oct 16th 1896) 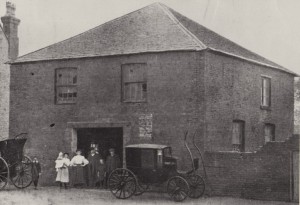 “The Cricket Ground Chapel was a place of worship until 1859 or thereabouts, and was the South Street Sunday School until 1867” recalls Adeline.

Bagshaw’s Directory description dates from a couple of years after that of the publication of the first of the Fly Leaves.