The Harrisons below the Pound.

“Lower down Derby Road, below the Pound, was an old cottage in a garden. A Harrison lived in it.
“There were many Harrisons in Ilkeston at that time. I do not know whether they were distantly related or not.”

The Pound was possibly the pinfold, on the north side of Derby Road, just past Kester Harrison’s house.
The old cottage was on the same side, mid-way between the pinfold and the Derby Road windmill.

Adeline listed many Ilkeston Harrison inhabitants, several of them very elusive.
The Harrisons of Derby Road may have been couple Thomas and Susannah (nee Clifford), daughter of framework knitter Robert and Elizabeth (nee Wilkinson).
Thomas was also a framework knitter when he married Susannah in September 1826 but in later life converted to coal higgler.

In 1824 Susannah had given birth to illegitimate son Thomas who adopted the name of Harrison after his mother’s marriage and lived with them in Moors Bridge Lane until his own marriage to Mary Raynor in 1848.

Thomas senior died in the Lane in October 1861 and his wife six years later. Both were aged 82.

The Straws of the old Moor Brig.

“We now see the old mill but not any house until we come to the old canal bridge.” (This was the Nutbrook Canal)

In this map we are walking along Derby Road, (from right to left) past the Windmill which had been moved from the site of Field House. 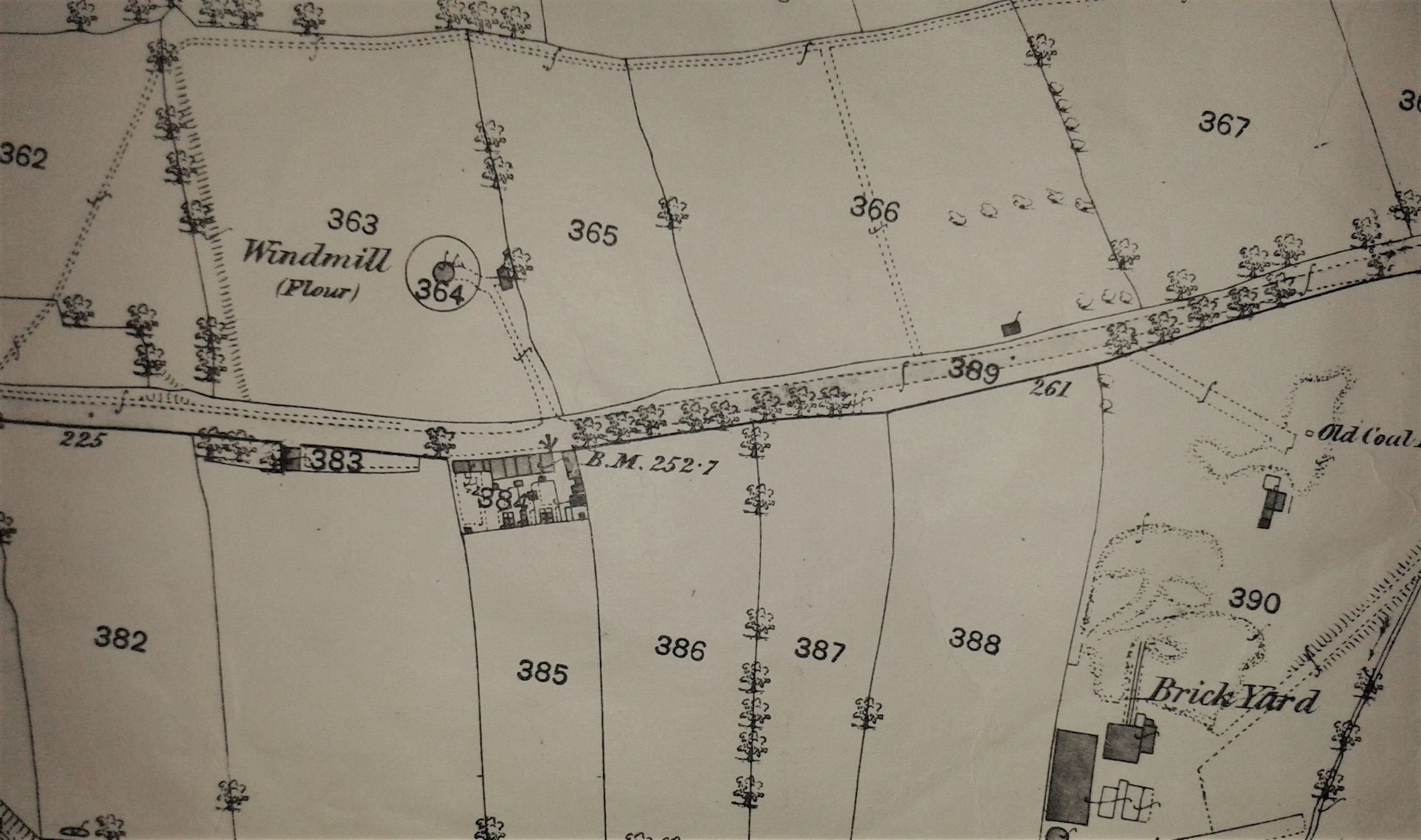 “In this home lived the Straws. The two daughters had a Girls’ School, nearly at the bottom of Bath Street.”

The baptisms of their children and the census suggest that initially they lived at Newthorpe Common until about 1828 before moving to Stanton Lock where Samuel was described as a lock-wright.

In the 1840’s the family moved into Moors Bridge Lane where Samuel was a ‘canal agent’. 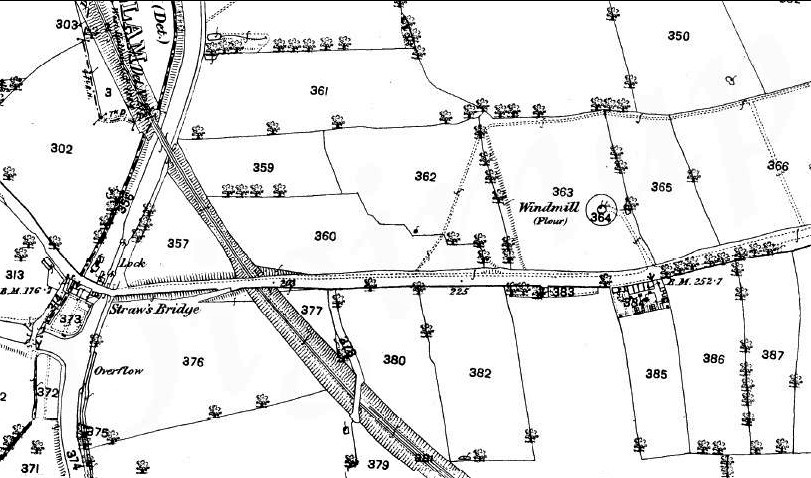 Above, the 1880 map continues, to show Straw’s Bridge

That is where the couple spent the rest of their lives. Sarah died there in July 1861 and Samuel in November 1872. 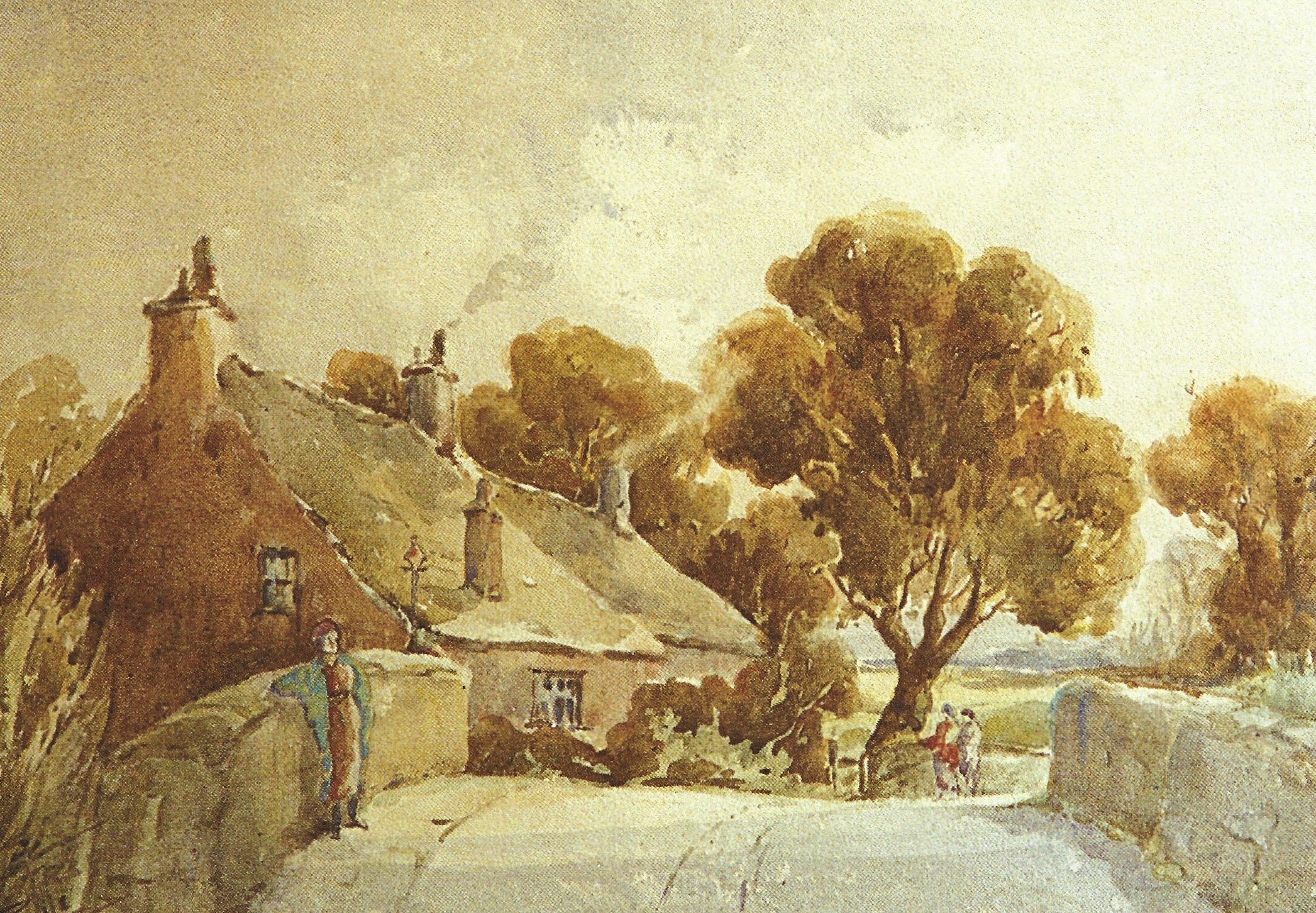 Mystery alert!
There were four daughters of the marriage though only three came to live in Ilkeston.
Sarah Ann died unmarried in 1856, aged 29, described as a dressmaker.
Caroline lived in the Lane with her parents until she married collier Benjamin Samuel Brown in March 1878.
Like Caroline, Julia was a ‘housemaid’ and lived at home until 1862 when she married Cossall boatman and widower Isaac Newton.
I have as yet not found evidence linking them to the ‘bottom of Bath Street’ school.

That’s far enough. We now turn and walk back on the other side of Derby Road to the Hollis household.