From Chain Row , Adeline takes us down Derby Road, on the right, pointing out that ….
“below England’s Field, now Albert Street, and the next field (Queen Street Field?), was a drive leading to a nice large house, the entrance to it being through a white gate and a grove of trees on Derby Road. Christopher Harrison had lived in it — he was commonly called Kester Harrison. He had retired from business.
“For some time after he died it remained empty, then it was divided, and Anthony’s and Benniston’s lived in it”.

On April 13th, 1804 hosier Christopher ‘Kester’ Harrison had married Nanny Skevington, the daughter of carpenter Henry and Catherine (nee Matthews).
In 1829, he purchased the property, described by Adeline, off Derby Road – Needham’s Croft – from Risley landowner John Michael Fellows and his wife Mary (nee Cocker), and initially used it as a field and ‘garden’

Early directories show ‘Kester’ as a grocer (1829), a shopkeeper and dealer in sundries (1829-1835) but eventually a hosier in South Street (1842). However it would seem that by 1842 he had built a house and outbuildings on Needham’s Croft (for himself?) and by 1846 had added four other houses, a factory, a framesmith’s workshop and a stable. Within a year he had added a further house. Now he was described as a ‘farmer and hosier‘ — the same description being used in 1850, when he was living in a misspelled ‘Woodbridge (Moors Bridge) Lane’ (1850) while also trading as glove manufacturer. Thereafter he is described as a lace and fancy net manufacturer (1855) and a hosiery manufacturer (1857-1860).

His residence in Derby Road is sometimes referred to as ‘Mount Pleasant’. It appears quite clearly on the Local Board map of 1866 … the relevant part is shown below and we can see the drive leading from Derby Road (at A) up to the large Harrison house, on the top right (at B) 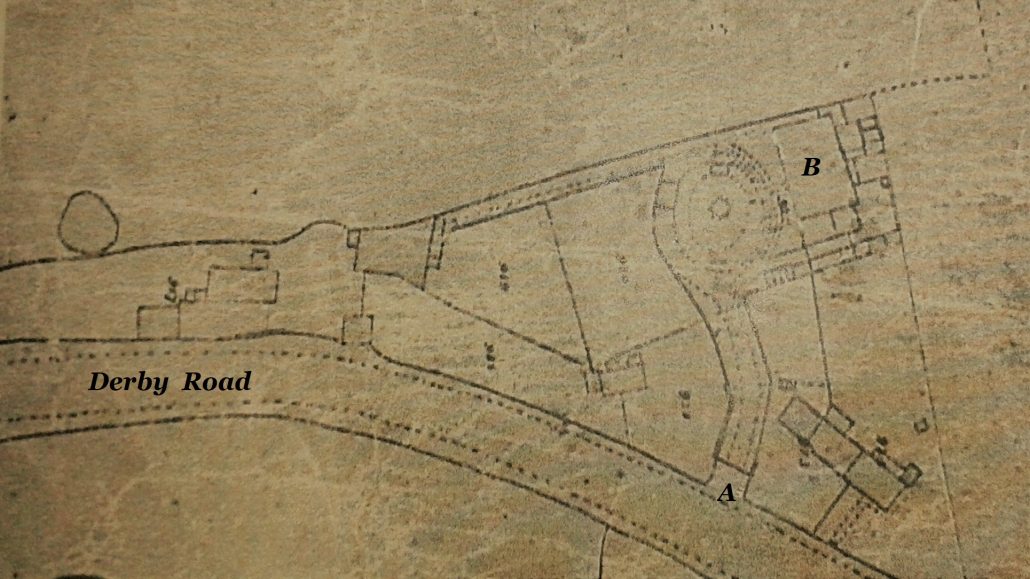 Kester’s wife Nanny died on December 18th, 1841 and some time later Christopher acquired a ‘live-in housekeeper’, widow Edith Wright.
She was possibly born Edith Harwood in 1803, daughter of Thomas and Hannah (nee Bowren), who married William Wright in October 1828.
She was provided with accommodation in Christopher’s will should he predecease her but Edith died on September11th, 1862 at the Derby Road premises.

In 1858 Christopher let out two of his rooms to Thomas Jones who told a sorry tale — his wife had been left behind in Chesterfield and his goods had been left behind at the railway station as he couldn’t pay their carriage charge.
The hosier lent him a shilling towards the costs but shortly thereafter Thomas absconded without repaying the loan, without paying his rent but taking with him a counterpane, sheet, pair of tongs, kettle and clock, all belonging to his former host. These items Thomas took to a local beer-house and marketed them to his fellow drinkers.
But the long arm of the law belonging to Sergeant Hudson quickly apprehended the scroundrel.
Christopher then discovered that his erstwhile lodger was in fact not Thomas Jones but Abraham Taylor whose wife was in Wolverhampton from which town he had just left in search of work.
Abraham pleaded guilty to all charges, hoping for leniency from the magistrates — who thus awarded him four calendar months at Derby House of Correction, with hard labour.

After this many of his house contents came up for auction.

It listed a large collection of furniture, linen, carpets, lamps, kitchen and household utensils, crockery and cutlery, glasses and ornaments, tools of all description,

an accordion and case, barometer and telescope,

76 books including Smollett’s History of England and a family bible,

a musical box and a superior eight day clock (by Shepperley and Pearce of Nottingham). 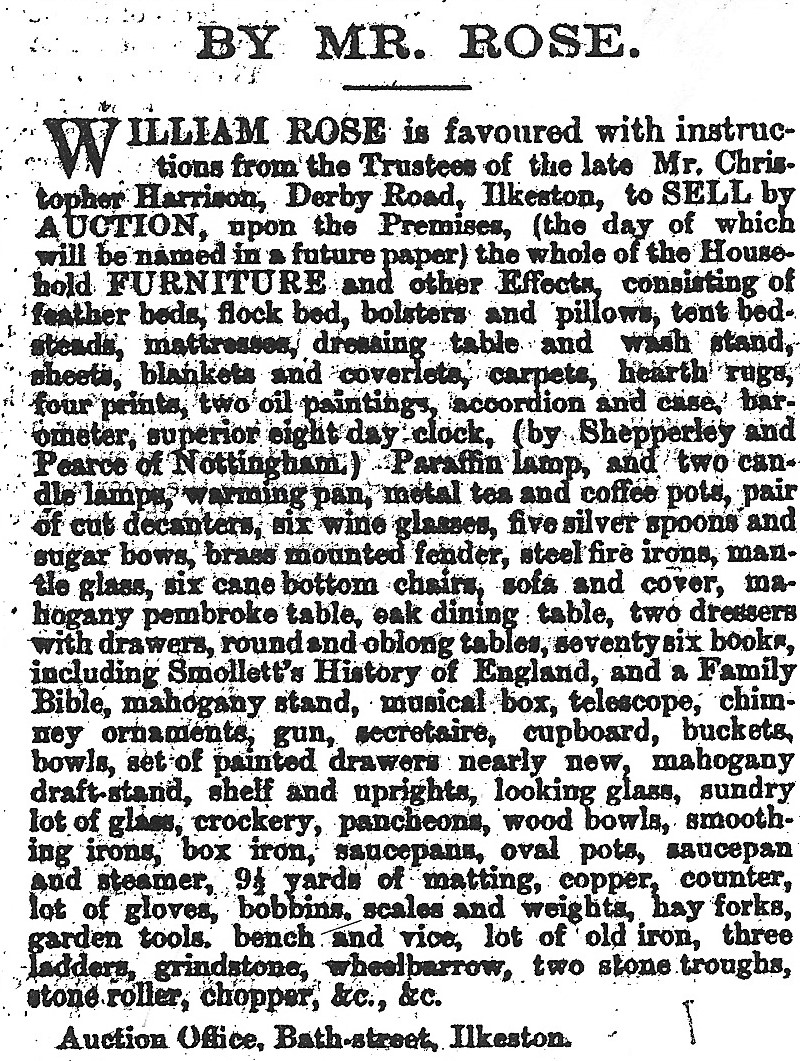 A fortnight later and Christopher’s premises in Derby Road were for sale by auction.
These were described as ‘seven freehold messuages or tenements adjoining together with the large garden, orchard and outbuildings’, covering nearly half an acre and once occupied by Christopher and his under tenants, though formerly occupied as one residence.
The property had an elevated position, commanding an extensive view of the surrounding countryside, and had a carriage approach from Derby Road.
There was still the framesmith’s shop, stable and outbuildings.
The whole property was eventually sold in 1868 to hosier Charles Sudbury for £420. And in 1874 the premises were sold on for £725, to Arthur George Whitehouse, a West Hallam iron and coal master. The estate was unsuccessfully auctioned in May 1883. Thereafter it was retained by the Whitehouse family until it was sold in 1922 — then comprising four houses.

An Old Scholar recalled Christopher as having his workshop in Skevington’s Yard, later known as Robey’s Yard, in South Street, where his brother-in law Henry and family lived.
“A friend, once calling in to ask how (Christopher) was getting on with his work, he replied ‘Pretty well; when I have finished this hose I am making and another, and eleven pair more, I shall just have made a dozen’.”

Adeline tells us that …“when, in 1857, the Carriers built a new wing to their factory, installed shafting throughout, also introduced hosiery frames, the stockingers had to work in the factory instead of at home.
At this time Kester Harrison’s house was divided, and two families who came from Nottingham to work for Carriers, named Anthony and Benniston, lived in them”.

One of Anthony’s sons was George.

The Anthony family would probably have lived in Moors Bridge Lane during the 1860’s
Bilborough-born stocking maker Thomas Anthony, son of  Thomas and Charlotte (nee Towle), came to Ilkeston from Bramcote about 1860 and resided originally in Anchor Row. With him were his wife Sarah Ann (nee Bailey) and children George and Caroline.

Shortly after arrival daughter Charlotte was born followed by Sarah Ann in 1862 — both born in Anchor Row – then Frederick, Thomas, and finally Ellen in 1871.

By this time the family were living in Nottingham Road and shortly after, the family left to live and work in Nottingham. That is, all except Caroline who had married James Trueman, brewer, in 1876 and was living in Park Road and later Factory Lane.

It was perhaps son George Anthony who was being described by the Ilkeston Telegraph in March 1870 when it reported on a youth named Anthony, aged about 15, who worked with his father at Messrs Carrier’s factory and known as a very skilful hand.
A ‘slight domestic disagreement’ with his father led to the lad’s disappearance from home taking his parent’s purse containing about £9. This helped to pay for a train ticket from Ilkeston station to Trent station and thence on to Derby.
The newspaper speculated that he might have been on his way to America to join two uncles there.
If it was George then he never made it across the Atlantic. The 1871 census shows him in Nottingham Road with the rest of the family.

When England’s Field was sold, Mr. Benniston (sic) bought a plot and built a house for himself on it.

Though born in Heanor, framework knitter William Beniston arrived in Ilkeston from Basford about the same time as Thomas Anthony and settled in Extension Street. He was accompanied by wife Eliza (nee Chambers) and children Arthur, Mary Ann, John, Thomas and William. Daughter Elizabeth was their first child born in Ilkeston, in 1861.

The 1871 census shows the family at 1 Albert Street — their new house on England’s Field? If so, their stay in Moors Bridge Lane would be sometime in the 1860’s.
By 1881 most of the family had left Ilkeston and were living in Nottingham.

“I remember one of his sons was named Arthur”.
Arthur Beniston married one of the Club Row Grimley family – Louisa, daughter of John and Mirah (Trueman) – in April 1872 – and then spent several years in India.
Their son Arthur William died in Tardeo, Bombay, in January 1881.

While in Bombay, Arthur had loaned several items to the Church Institute for display at the Market Place premises. They consisted of a set of Benares brasswork — two large brass plates or trays, an urn-shaped centre piece with a movable ornamental cover, and two vases to match, all hand-chased and valued at £2. They were entrusted to Edwin Trueman, a trustee of the Institute, for safe keeping and he had placed them in a display case in the reading room. In mid-December 1887 Edwin saw that the exhibition had been tampered with and all the items had disappeared — not the first time that ‘curiosities’ had been stolen from the Institute.

The items were discovered four days later, hidden at the foot of a hedge in St. Mary’s Church graveyard.

Adeline recalls other Nottinghamshire families in the lace trade who came to Ilkeston about the same time.

Thomas Kirk and Eliza Westby were married at Lenton in 1853 and came to Ilkeston about 1859 with two children, Sarah Ann and Samuel Westby. Daughter Elizabeth was then born followed by George Edward and Ruth.
The 1861 census shows them at Carrier’s Buildings — or Pleasant Place — in South Street before the family moved back to Lenton a few years later.

…. and White’s in the house in Burr Lane under the room occupied by John Burrows.

Joseph White junior was one of at least 11 children born to Basford glove and hose manufacturer Joseph senior and Amelia (nee Duck).

In 1851 the family was residing there in Park Lane and would have been acquainted with close neighbour and cordwainer William Watson, his wife Ann (nee Haywood) and family, including their daughter Elizabeth.

On Christmas day of that year Joseph White junior married Elizabeth Watson and continued to live there for a few more years before moving to Radford, Nottingham. He was employed in that city by Messrs Henry Carrier and Sons as a lace warehouseman and came to Ilkeston about 1858/59 after the firm expanded in Ilkeston and brought machines from Nottingham.

The first Ilkeston-born child of Joseph junior and Elizabeth was Leonard James born in Regent Street in 1859 where the family initially lived.
It was in the mid to later 1860’s that the family moved into East Street.

This family appears to have found something to keep it in Ilkeston!
Joseph junior was a member of the United Methodist Free Church in South Street being at one time a local preacher there — the 1871 census records him as such — and Superintendent of the Sunday School for several years.

At that time the Ilkeston Advertiser described Joseph’s “lovable character. His simple, gracious sincerity in all things, marked him out as of the type of true English gentleman… He was one of nature’s noblemen, whom to know was to admire and love”.

Let us pause at the Benistons .