The Prince of Wales beerhouse

We follow Adeline as she walks … “after Chapel St, to a cottage and then arrives at the Prince of Wales in Bath Street, a very small public house”.

The Prince of Wales beerhouse on Bath Street was at the south corner of Chapel Street and Bath Street, and was there as a beerhouse until the late 1940’s at least.
In 1871 this was 93 Bath Street, as it was in 1881. With the renumbering of Bath Street premises about 1888, it became 68 Bath Street (now only even numbers on this side) and remained thus, into the next century.
In 1960 permission was finally granted to demolish the pub premises, the shop next door and six houses in Chapel Street (numbers 135 to 140 inclusive) to build a new supermarket.

Born in 1820 John Green was a son of labourer and army pensioner John and Rebecca (nee Palmer) and worked initially as a silk dyer in Nottingham.
By 1861 he was the landlord at the Sir John Warren Inn, Old Street, Nottingham with his second wife Ann (nee Hodson or Hodgson) whom he had married on March 6th, 1855. She was a daughter of Nottingham fell monger Robert and Mary (nee Reeder?).
About 1862 John and Ann moved to the Noah’s Ark Inn in the Morledge, Derby, before eventually coming to the Prince of Wales beerhouse in Ilkeston with daughter Emmaline (not Arabella) and son John junior.
In 1866 the beerhouse keeper was declared bankrupt. At that time John had debts of £183 9s 6d and no assets. It appears that his mother Rebecca then took over responsibility for the inn.
In the following year at Ilkeston Petty Sessions John was representing his mother who was accused of allowing gaming with skittles at her beerhouse. He pleaded guilty on her behalf but bemoaned the fact that customers couldn’t enjoy themselves as they liked. The police however had accumulated many complaints of gaming at this particular beerhouse, although this was Rebecca’s first conviction – hence a fine of 6d and costs.

In the Spring of 1869 the beerhouse was up for sale.

“Mr. Green had one daughter and a son”. (I think he had two daughters and one son … and two wives !!)

“Arabella was housekeeper”
It was Emmaline (who was one of two daughters by his first wife, Louisa (nee Mullen) whom he married on July 24th 1846 — the other, older daughter was Maria)
Emmaline married Enoch Knighton, coalminer son of Frederick and Maria (nee Duro) of Awsworth Road, in September 1872. She died in 1883 and Enoch married his second wife in 1896.

“Son John who married Eliza Smith of Mount Street, was in the business. John’s wife did not live very long after her marriage”.
John junior was the son of John senior and his second wife, Ann. He married Eliza Smith, daughter of lace designer and framesmith William Bennett Smith and Hannah Eliza (nee Fox) in April 1879, but she died less than a year later – March 1880 — in Chesterfield, having just given birth to daughter Eliza Ann.  She was returned to Ilkeston to be buried in Stanton Road Cemetery.

The daughter not mentioned by Adeline — perhaps because she stayed in Nottingham when father John moved from there to Ilkeston — was Maria, born in 1846. And Maria stayed in that city, unmarried, as a lace curtain folder, into the next century.

The beerhouse was then for a short time in the hands of John junior and his second wife, Kate (nee Sadler).
After John’s second marriage in January 1884 his daughter Eliza Ann had gone to live with her aunt Ann (nee Smith) the wife of gardener Thomas Floyd.

In April 1886 the licence passed from John junior to John Moore, who died in 1894; the licence then passed to Edwin Attenborough, who was still there at the end of the century. 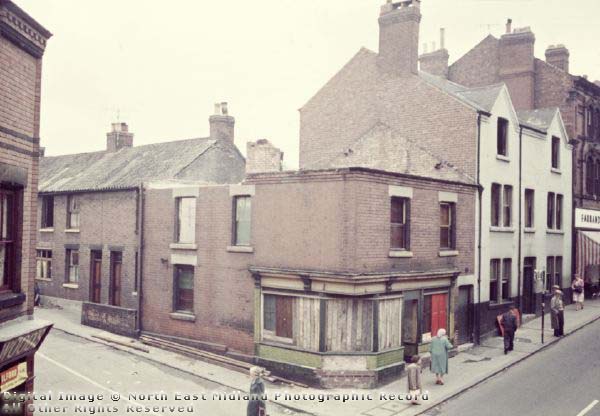 The Prince of Wales about 1960, just before demolition 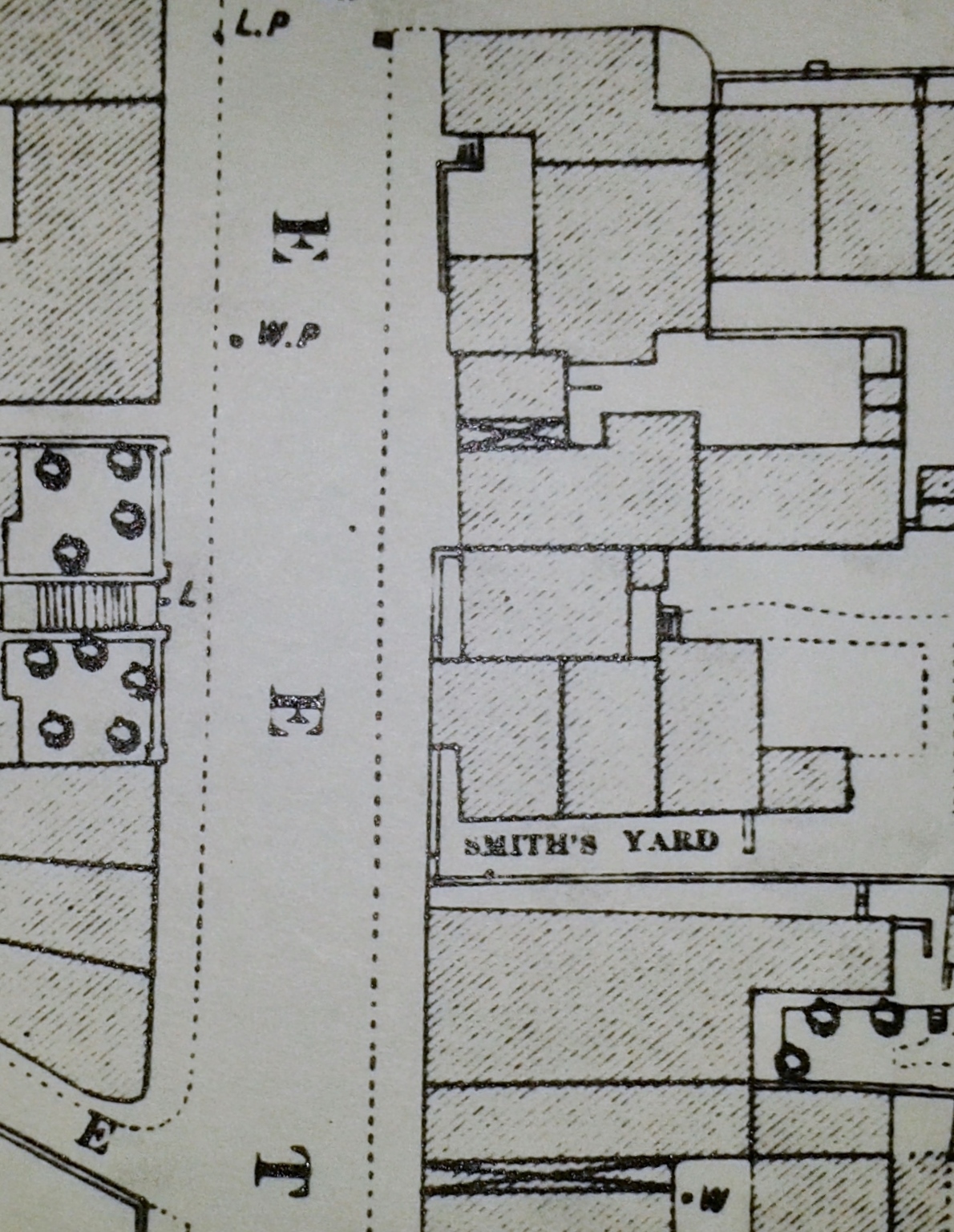 Chapel Street is at the top (right) of this map (c1880) and we are now walking up Bath Street from the Prince of Wales towards Smith’s Yard. On the left of the map you can see the steps up to the Primitive Methodist Chapel.