And what happened after George?

The last public execution at Derby took place on April 11th, 1862 when Richard Thorley was hanged for the murder of Eliza Morrow.

The last public hanging in England was that of Michael Barrett at Newgate Prison, London, on May 26th, 1868 for his part in the Fenian bomb outrage on December 13th, 1867, which killed 12 people outside Clerkenwell Prison. 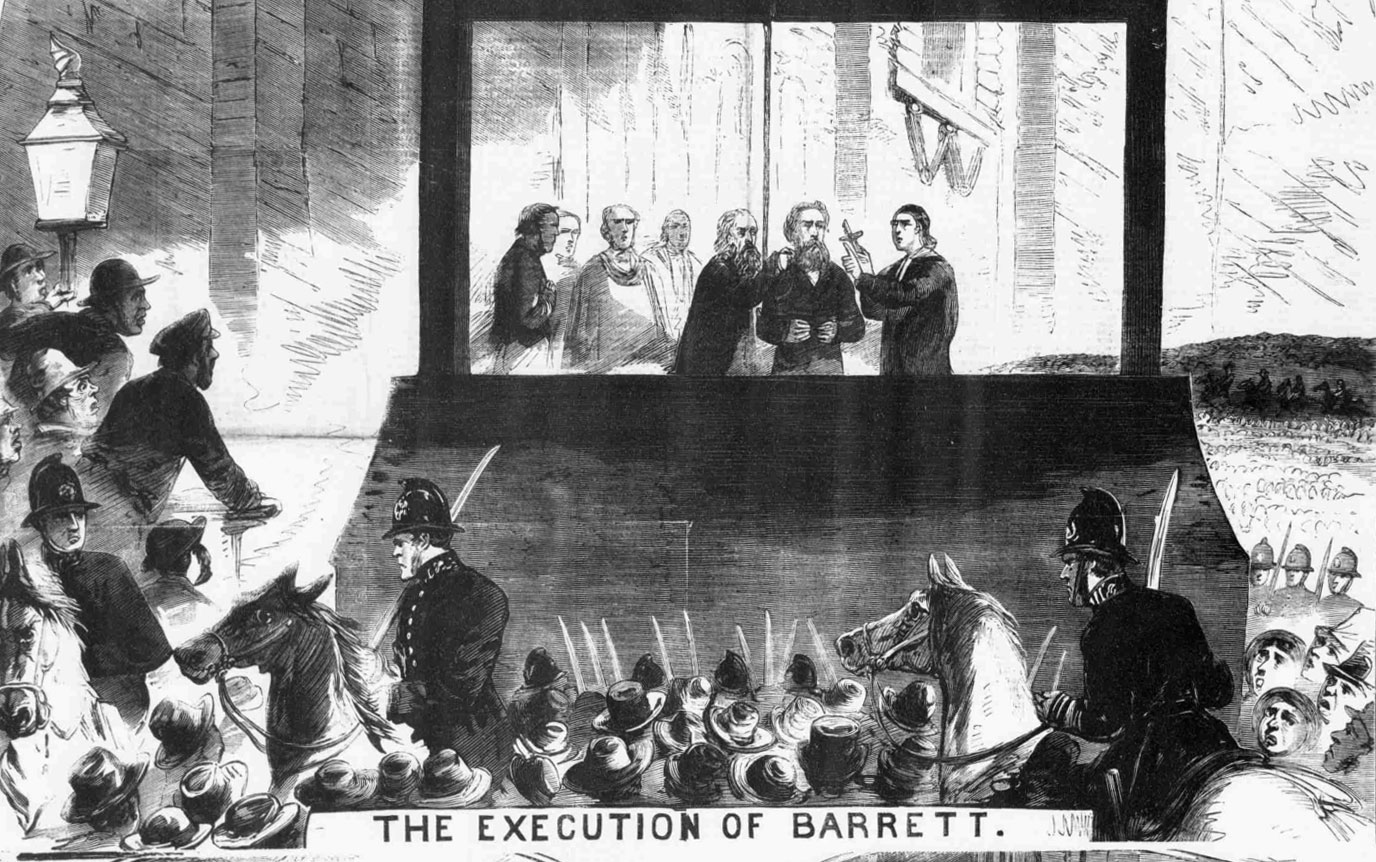 From the Illustrated Police News at the British Library

In August 1880 the Pioneer printed a list of the 79 persons who had been hanged at Derby from 1732 until 1880, including two who had hanged themselves inside the gaol.
George was number 76.
In the Pioneer’s list the capital offences were murder including infanticide, patricide and uxoricide, high treason, rape, bestiality, burglary, robbery, highway robbery, housebreaking, shop breaking, gaol breaking, horse stealing, sheep stealing, returning from transportation, counterfeiting, forgery, picking pockets, and burning stacks of corn. 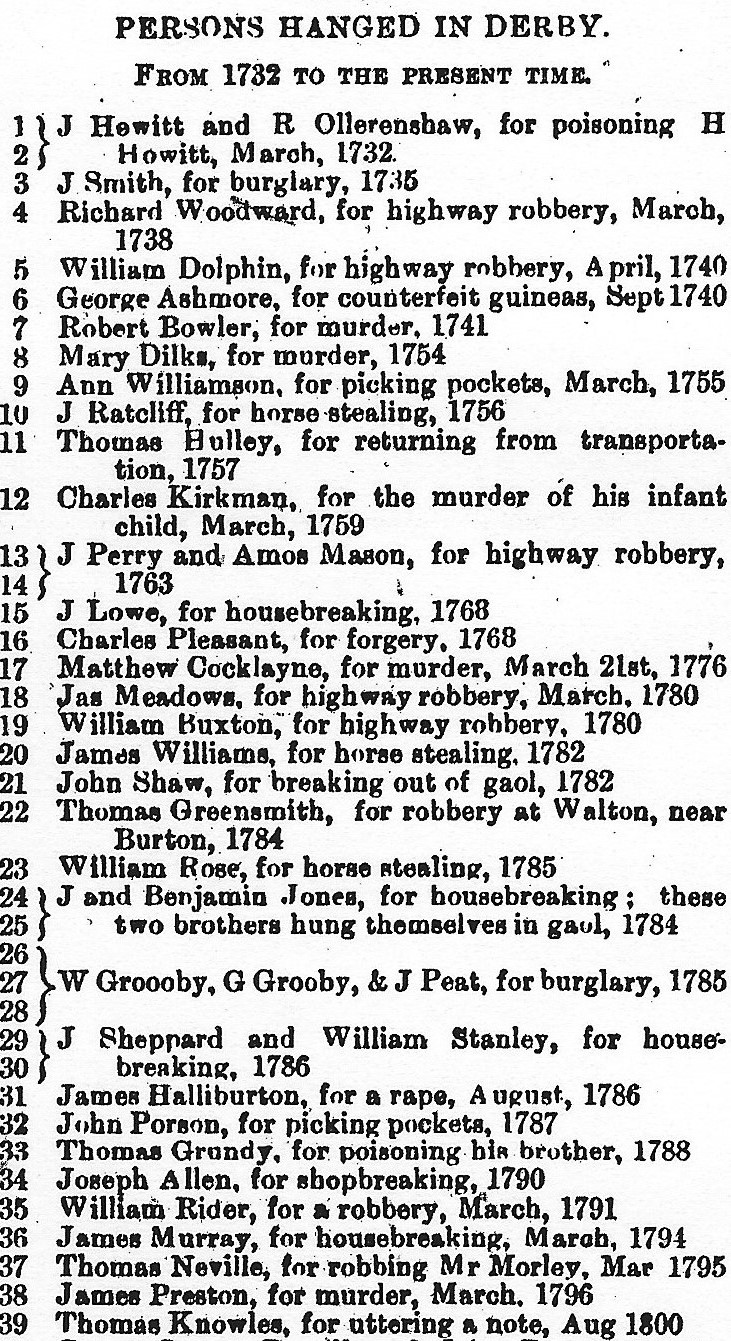 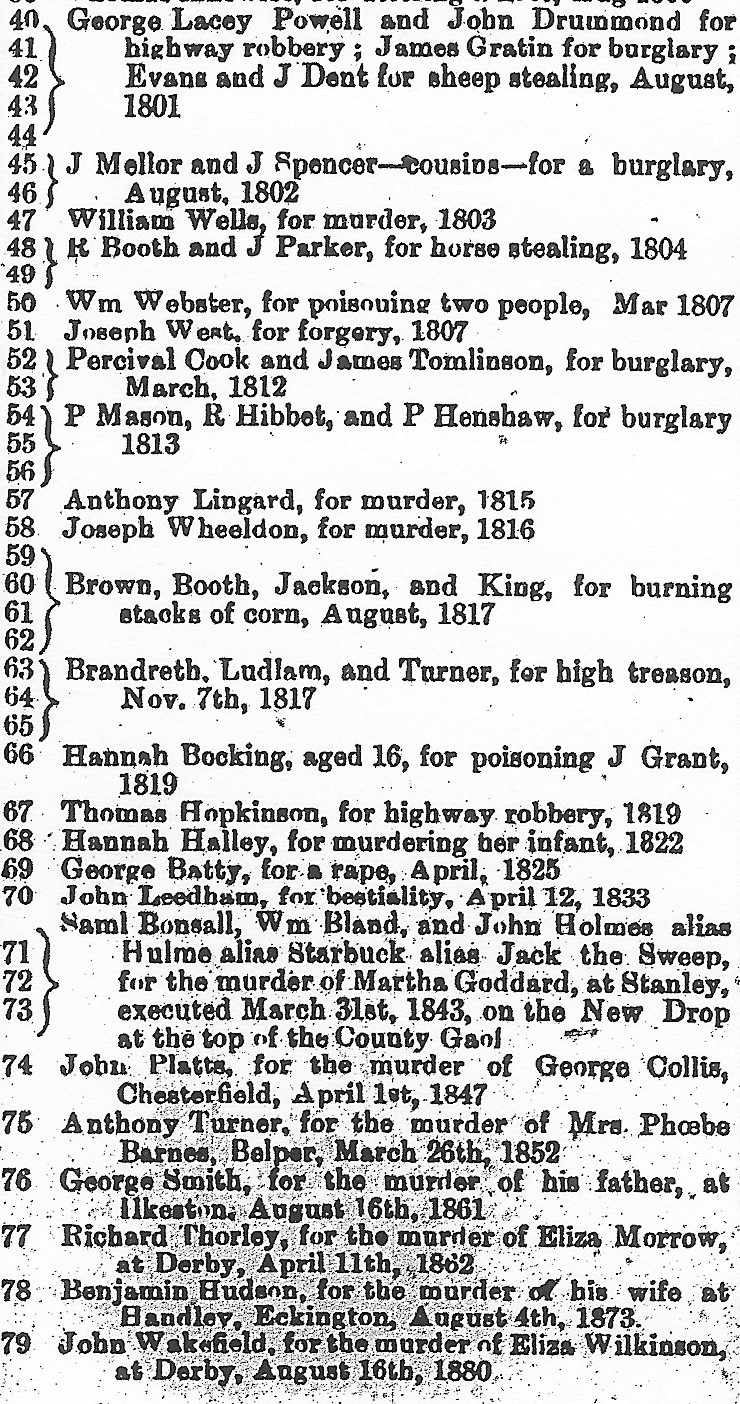 On Sunday August 25th 1861 the Rev. Heron’s sermon at the Ilkeston Independent Chapel, delivered in the morning and evening, considered the sad history of George Smith. The chapel “was crowded to suffocation on both occasions” such that hundreds were unable to gain admittance. This sermon was subsequently printed, with two others delivered by the Vicar of St Mary’s, one just after the murder and the other just before the execution.

George’s sister Sarah, wife of Aaron Aldred, lived on in Ilkeston at North Street and later in Chapel Street.
She died at her home at Lawn House, Gregory Street, Ilkeston, on May 21st, 1891, aged 54 and was buried in Ilkeston General Cemetery, Stanton Road.

Aaron Aldred continued to live at Lawn House, and remarried to Rosetta Hodges on March 2nd, 1894, at the United Methodist Church on South Street. The 1901 census shows them with two children — son Louis and Mary. The latter was the younger of twins — her sister Lucy had died on January 7th 1900, just two days old.
Aaron died at the Gregory Street home on April 25th 1926, aged 88. Rosetta died in 1933.

Henry (Smith) married for his first wife Lizzie Riley, the second daughter of George Riley, of New Street, and she left one son. Henry’s second wife was Miss Howard, sister to Ben Howard.
George’s brother Henry married Elizabeth Riley, daughter of George and Charlotte (nee Cockayne) of New Street (Station Road) at Christ Church, Cotmanhay on November 28th, 1865. They continued to live at Smith’s Yard, Bath Street, having sons Henry (1868) and Edward (1871) born there, until Elizabeth died in October, 1874, aged 28. She was buried in Ilkeston General Cemetery.
Shortly after, in 1875, Henry married Sarah Howard, daughter of coal agent and wharf manager Benjamin and Harriett (nee Allen) of Babbington Wharf, Ilkeston, and continued to live at Smith’s Yard until towards the end of the century when they moved into Gregory Street.
Henry died at 5 Gregory Street on January 15th, 1923 and was buried at Park Cemetery. His funeral was arranged by Ernest Johnson of 143 Station Road, my grandfather.

Edward went to Glossop when young, was very successful, and returned later to his native town.
George Clay Smith’s brother Edward was educated at the British School, like his siblings.
A boot and shoe dealer, he moved away from the area, at first to Sheffield where he married Louisa (nee Eaton?) on May 13th 1872 ….  born in 1854, Louisa was in fact the illegitimate daughter of Hannah Jagger who, in 1858, married Staffordshire-born William Eaton, a forgeman, in Sheffield. Witnesses at Edward’s marriage were his sister Sarah and her husband, Aaron Aldred.
In the mid-1870’s the Smith family moved on to Glossop. This is where his uncles William and Alfred had settled in the 1840’s. William was a grocer and tea dealer while Alfred had initially worked for William before marrying there and then setting up his own grocer’s shop.
Edward brought his family back to Ilkeston in the mid-1880’s, settling in Glossop House, Gregory Street.
He became a member of the Town Council in February 1912, as a member for the Victoria Ward, subsequently serving on the General Works and Old Age Pensions Committees, and in 1919 was invited to become Mayor of Ilkeston – an invitation which he accepted. 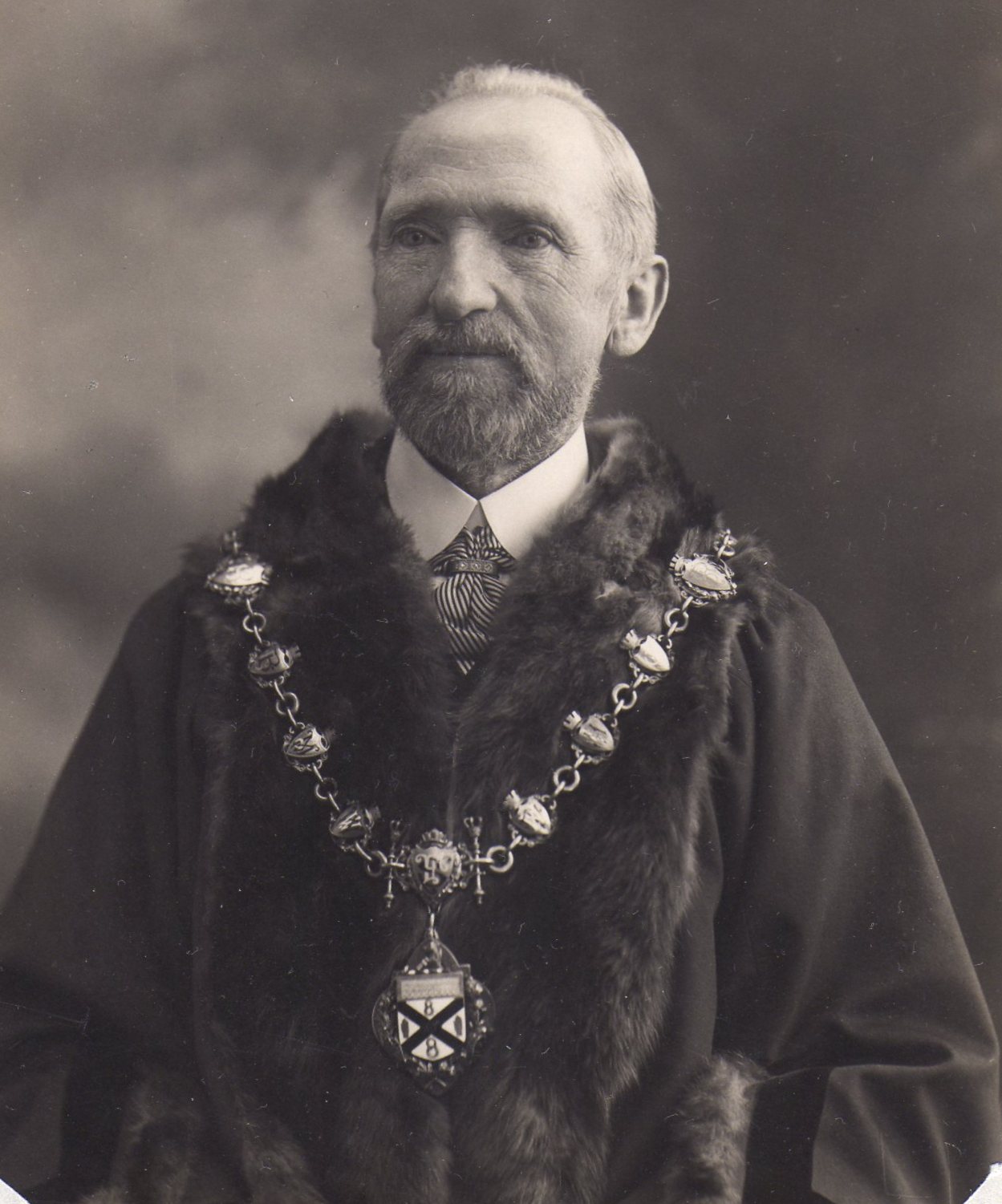 In the following year his elder son William became Mayor, followed by his second son John Edward in the next year.
Thus came about the remarkable incident, said to be without parallel in the history of municipalities, of a father and two sons being mayors in four consecutive years. It was still more remarkable in the Alderman Smith and his sons all lived at Glossop House, so that at one time there were three ex-mayors of the borough living under one roof. (IA)
The couple celebrated their Diamond Wedding anniversary just before Edward died at Glossop House on November 26th, 1933, aged 85. He was buried in Park Cemetery.
Louisa died at the family home two years later, on October 13th 1935.

All their five children continued to live, unmarried, at Glossop House until their deaths. One other child, Harriet, born in 1880, died in the same year.

George’s uncle Samuel Smith seems to have lived most of his life in Chapel Street and died there on July 5th, 1895, aged 83.
A month after the execution of his nephew he felt compelled to write a letter printed in the Ilkeston Leader in which he encouraged Mr. Heron to do all he could to help people forget the murder of his poor brother and the death of George, rather than keep reminding people, through his sermons and writing. He wanted people to help him and his relatives forget these awful events.

Emma Eyre, daughter of bricklayer Thomas and Ann (nee Tomlinson) of Awsworth Road, chose to have her daughter Annie baptised after the death of George, at St. Mary’s Church on October 5th, 1862.
At the trial it was suggested that George needed his father’s money to flee the country and escape his ‘responsibilities’.
Emma married coalminer John Mitchell in September 1868 and had several further children at Awsworth Road and later at Chapel Street. She died at 9 Victoria Street, Cotmanhay on September 3rd, 1884, aged 41.

While living with her mother Emma and step-father at Chapel Street, Annie Eyre gave birth to a son (September 23rd 1879), who died from pneumonia, still unnamed, three weeks later. Her second illegitimate child was Eliza Ann Eyre (March 17th 1882), born at 1 Carr Street. When her mother married Henry Granger on Christmas Eve in 1882, Eliza Ann took the surname of her step-father, and shortly after the family was living at Eyre’s Gardens. (Annie’s marriage entry shows her father unnamed but ‘deceased’).
Ann Crewe has added –– My great grandmother was Annie Eyre and my mother knew Eliza Ann (her auntie). The only other aunties and uncles she knew were; Sam, Jimmy, John, Henry, Alf and Lillian, my grandma was the youngest and her name was Annie, she died aged 94 in 1998.

George’s ‘intended wife’ Ellen Cox, the daughter of framework knitter Edward and Mary (nee Waters), gave birth to her illegitimate daughter Sarah Ann in the summer of 1861.
This lass had family connections with Enoch Waters who was landlord at the Gladstone Inn in East Street. Perhaps this is how George came to know her ?
(I believe that in 1864 Ellen married blacksmith George Mee but died four years later).

Aaron Aldred’s brother Isaac lived in the Albion Place area until he died while resident in Lee’s Yard, in April, 1875, aged 40, being buried in Ilkeston General Cemetery.

Martha Cockayne — the young girl who gave evidence to the court — was the cousin of Henry Smith‘s wife, Elizabeth.
She was the daughter of framework knitter William and Mary (nee Henshaw) of Bath Street and was about 11 years old at the time of the murder.
In November 1868 she gave birth to illegitimate daughter Agnes who died six weeks later. The father was Ilkeston collier Samuel Bostock.
Six months later, in June 1869, she married Heanor-born lacemaker George Birley, moved to Nottingham and thence to Long Eaton.
At the end of the century she was still there with her second husband, retired lace manufacturer Edmund Towle whom she had married in October 1895. First husband George had died in 1892.
Edmund died in 1912, aged 91 — did Martha then marry for a third time ? — in 1928 to George Gostick — and die in Ilkeston in 1938, aged 90 ?

Joseph Smith, murdered cordwainer, was buried in St. Mary’s churchyard on Sunday afternoon, May 5th 1861. He was a member of the Manchester Order of Oddfellows, of which about 100 members were present at the funeral.

Twenty six years after the death of Joseph Smith, we find another death in Smith’s Yard.

Shortly we will meet Ann Hutchinson, a young woman who lived all her life in Club Row where she had two illegitimate children before marrying  ironstone miner John Briggs in 1865. Her first child was William Hutchinson alias Briggs, born on June 6th 1861.

In 1884 William married Martha Johnson, the daughter of joiner Amos and Sarah Ann (nee Wardle), and the couple then went to live in Smith’s Yard where they had twin girls born on February 11th 1885, before daughter Lilian was born on October 21st 1887.

The child seemed healthy and was prospering. A few days before Christmas Day, a Thursday evening, Martha took Lilian to bed, gave her a biscuit and beast-fed her for a while. The two then fell asleep when, at three o’clock in the morning, the mother woke to find her baby dead. She was nine weeks old. “The body was not in the slightest degree discoloured” An inquest jury returned a verdict of ‘Death from convulsions’.

Are we now ready to meet Tailor Thomas Wass ?