After Oakwell Farm,  Adeline identifies that .. “next came the newly opened Belper Street. Plots for building were still being offered for sale, but buyers did not come along very quickly.”

The land behind (i.e. to the south of) the Three Horse Shoes Inn in Derby Road, was in the possession of Henry Sills in the latter part of the nineteenth century. He was a prosperous farmer and blacksmith of Shipley, and when he died in 1798 his land passed via his son Thomas, other members of the Sills family, trustee of his will James Potter (miller of Ilkeston), Potter’s sons Samuel and Thomas,  other Potters and a couple of Attenboroughs, as well as Amos Beardsley, to arrive in April 1857 in the pages of the local press, where it was advertised as ‘to be sold by Auction’.
The sale was to take place at the Three Horse Shoes on April 24th when the land would be sold off in mutiple lots.

First on the list was the Inn itself, with freehold ‘Buildings, Garden and Yard’, and whose landlord was William Severn. In the same lot were two freehold cottages then occupied by Henry Sills, the grandson of the ‘original’ Henry and also a blacksmith, and collier William Bestwick.
There followed 25 freehold building lots ‘in the very best part of Ilkeston‘. These lay along the line of Belper Street, which was, as yet, undeveloped.
Also up for auction, but not in this area, was the freehold house on Bower Hill, occupied by Rebecca Sills, the daughter-in-law of the original Henry and widow of his son Thomas who had died in 1755.
Samuel Potter of Ilkeston Park was responsible for the auction, and Jonathan Clark, victualler of the Portland Arms in Jacksdale, was the successful bidder for several of the building plots along Belper Road.

At this time ‘undeveloped’ Belper Street was ‘a new street‘ lying between the Turnpike Road linking West Hallam and Nottingham (now Derby Road) and Union Road. To its east lay land owned by Patrick Derbyshire, and to the west, land belonging to Lord Belper.

Jonathan Clark was quick to sell off parts of his purchase, and those parts plus others, subsequently passed through the hands of grocer James Hithersay, hosiery and glove manufacturer Francis Sudbury, needlemaker Samuel Bloor, and others, before the end of the century.

Belper Street was one of the first streets made by the new Local Board in 1867.
Under the Local Government Act, the Local Board had the power to order that roads in its district should be properly sewered, levelled, paved, etc. — these improvements to be undertaken and paid for by the owners of property on those roads. If the owners refused to comply with this order the Board could execute the work itself and charge the cost to the property owners, according to their frontages.

Both the 1871 and 1881 censuses show Cossall-born lacemaker Solomon Robinson living in Belper Street with his family.

‘Genial and kind, always the same happy face’ (Philip Straw 1893)
Solomon was the son of Joseph and Catherine ‘Kitty’ (nee Leadbetter). His wife was born Ann Rigley, the daughter of collier Samuel and Hannah (nee Chambers) and she married Solomon in 1850 at Ilkeston Independent Chapel.
By the last decade of the century they were at 4 West Terrace off North Street where they both died, Ann on February 7th, 1892 and Solomon on May 16th, 1910.

“…. and Cope the carrier built another on the west side, but otherwise the road had not attracted building on it.”

The Cope family were carriers since 1862. The 1870 Harrod & Co. Directory informs us that Joseph Cope goes to Nottingham every Tuesday, Wednesday and Saturday, and he leaves Ilkeston for Belper every alternate Monday, calling at Heanor, Smalley and Kilborne. He leaves the King’s Head, Belper, stopping at Kilborne, Smalley and Heanor on his return.

Carrier Joseph spent the earlier part of his life living in the Hunger Hill area of Nottingham Road and it was while there in 1867 that he came into conflict with the Local Board.

He owned land and premises adjoining the ‘new’ streets of Belper Street and Union Street (sic), and so was required to ‘sewer, level, pave, flag and channel’ those parts of the streets which adjoined his property to the standard required by the Board.
Joseph pleaded poverty … a lack of income coupled with a wife and six small children to support. The Local Board therefore carried out the work and sent Joseph a bill for £23 15s 3d which he was ordered to pay. The carrier still refused to pay — he could not see why the work had been done in the first place as there was not the slightest need for it. He would not pay a penny and the Board could take what proceedings it liked.  So there!!
Thus Joseph became the first person in Ilkeston to be prosecuted by the Local Board for non-payment.
At the petty sessions he was described as ‘a man of considerable means’ but when the judgement went against him and he was ordered to pay for the work, he asked for three months grace. The court suggested that he should approach John Wombell, clerk to the Board, who was in a position to assess his request.
Perhaps it was too much to beg before the Board and Joseph paid the full amount almost immediately.

Almost ten years later Joseph and the Board were in conflict again.
The carrier was refusing to remove a wall, post and railings in front of his house in Union Street and which were causing an obstruction. At Ilkeston Petty Sessions he was fined 40s, an amount which would be remitted if the obstruction were removed.

Joseph died at his home of Belper House in Belper Street on December 3rd, 1904, aged 81.

The youngest of the Cope family, Walter, was just returning home at night,  walking down Stanton Road, when he came across a horse travelling down the same road, with only a halter on, weaving from side to side and carrying Henry Bower. Henry seemed unable to control the animal and when a dog came out, it startled the horse; Henry ended up on the ground and with just a minor cut on his eyebrow, fortunately for him. However, unfortunately for him, he had been spotted by Police-constable Lipscombe who requested that Henry attend the next Petty Sessions.
Walter kindly escorted the injured rider and his mount to their home where Henry had two weeks to prepare his defence.
When he appeared before the magistates he blamed it all on the barking dog !! He fell off and could remember no more after that. However the fact that he had just visited Ilkeston fair and had had several drinks counted against him. “Drunk in charge of a horse on the highway” was the charge proved against Henry — fined half-a-crown, plus expenses.

One of Walter Cope’s older brothers (by four years) was Benjamin Meakin Cope, who worked as a carrier for his father Joseph. He was in Nottingham on the Saturday of June 25th, 1892, when he was approached by 82-year-old spinster Priscilla Martin who wanted a ride back to Ilkeston. She lived in Chapel Street, where she had recently lodged with her nephew George Aaron Cowlishaw and his  family, though she had been staying with her friend Mary Hall in Palin Terrace in Nottingham for a few days. After Priscilla’s request for a ride, Benjamin went off to prepare his horses but was almost immediately recalled to assist Priscilla who was obviously in distress, struggling  for breath. Before he could intervene, she fell dead to the floor.

Priscilla Martin had been born in Leicester in 1807, the daughter of framework knitter Aaron and Hannah (nee Goode). The family had moved to Ilkeston (1841), and then into Nottingham (1851) where, for many years she served as housekeeper to hosier Henry Carrier of Peverill Street, after the death of his wife, Frances, in 1866. After the death of Henry in 1881, Priscilla returned to Ilkeston, living for a time, with her nephew George Cowlishaw. He was the son of Francis and Jane (nee  Martin), the younger sister of Priscilla.

“Some years later Mr. James Butt built for himself a house in Union Street” writes Adeline.

We shall meet James Butt and his family as we move back into South Street. (See Burgin’s Yard and Row).

At the corner of Belper Street and Derby Road was the Miner’s (or Collier’s) Arms beerhouse with James Aram as the landlord in 1871 – he had been there since the late 1850’s. This was 9 Derby Road. 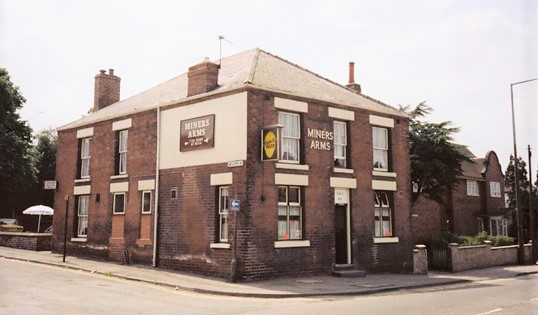 From closedpubs.co.uk; photo by Alan Winfield

Above, Belper Street is on the left, Derby Road, foreground right.

In 1879 the landlord was Joseph Childs who was also owner of a fine, young and obedient boar pig.
Joseph was so confident that his pet was well-trained as to place a wager that the animal would follow him from his Derby Road home, along South Street and into the Market Place. Thus, dressed in black velvet breeches and swallow-tailed coat, yellow waistcoat, white stockings, and carrying a piece of bread in his hand, the landlord set off from the Miner’s Arms, followed by his faithful pig.
Despite several pauses the wager was won, the scene causing much amusement to a large crowd of spectators.

In 1887 the landlord was Samuel Pearson who, like the majority of the landlords at this time, found it difficult to avoid trouble with the law. He had permitted ‘gambling’ in the beerhouse — namely allowing customers to play dominoes. His solicitor pleaded guilty on his behalf and asked for leniency — Samuel was fined £3 5s, including costs, but his license was not endorsed. But was the strain too much for him? A couple of months later (June 1887) and the licence was transferred to Edward Charles Lawrence. However the Miner’s Arms had now gained a reputation as a disorderly house and Edward had enhanced that reputation by being fined on at least one occasion. Consequently, when his license came up for renewal in September 1889 it was refused by the magistrates.

Edward however was only the tenant of the beerhouse, and in the following month, his lessee, George Offiler of the Vine Brewery in Derby, appealed against the decision of the magistrates …. an appeal which was successful.

And on the other corner of Belper Street and Derby Road, opposite the Miner’s Arms, was the Three Horse Shoes.