“Proceeding up Derby Road, (just past Belper Street), we come to Harvey’s public house, a rather quaint countrified place.” 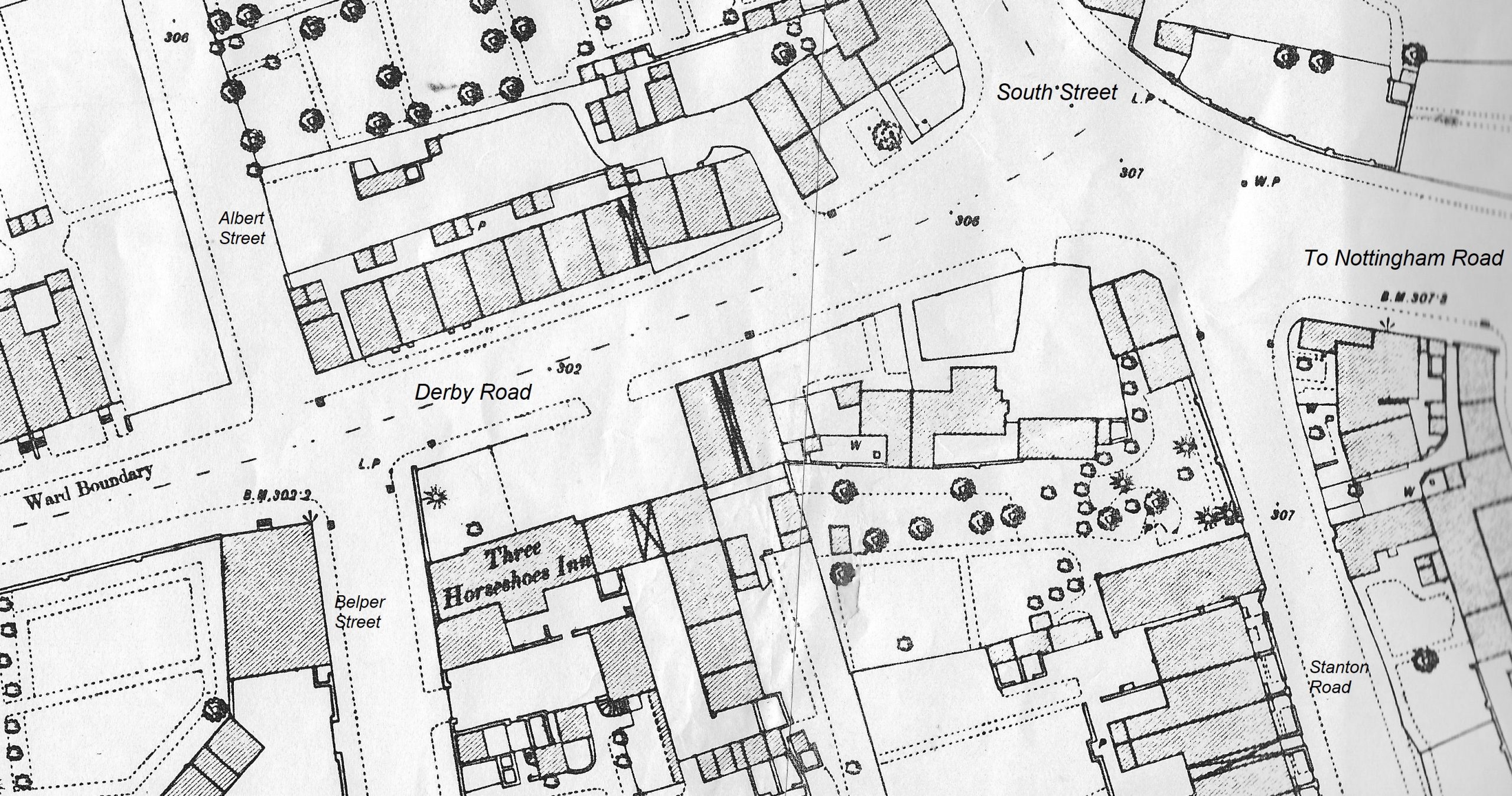 The Three Horse Shoes was an old Ilkeston Inn. It is mentioned by that name in Cresswell’s Nottingham Journal, January 1st 1774, when an auction of premises belonging to Mr Cripps and his sister Mrs. Cripps is described. The landlord at that time was Henry Sills (mentioned on the preceeding page).

And there is William Rowliston, aged 57, on the 1841 Census at Moors Bridge Lane, as a victualler, with 30-year old blacksmith Henry Sills, grandson of the above-mentioned Henry Sills, as his neighbour.

And the same landlord is there ten years later but only one month widowed, and with the same neighbour.

By 1855 wheelwright William Severn was the landlord.

John Harvey was the son of Mapperley shoemaker John and Jane (nee Cresswell) and he married Mary Tomlinson in January 1860, she being the daughter of Shipley farmer William and Ann (nee Gamble) and the niece of farmer Henry Tomlinson of  South Street.

John became proprietor of the Three Horse Shoes at about this time.

Just over a year after their marriage and shortly after the birth of their first child Mary, John was charged by his wife with violently beating her, an offence which brought him before the magistrates. He was fined 1s with 10s expenses, and was bound over to keep the peace for twelve months.
This assault does not appear to have had an outwardly permanent effect upon their relationship.
The couple continued together at the Three Horse Shoes for over 20 years and had at least another six children there.

The Inn’s proximity to Ilkeston’s Irish ‘quarter’ may have provided it with customers but could also cause problems.
In May 1874 brickyard labourer Martin Scully – who argued that he was only three parts inebriated and not totally drunk – tried to kick down the front door of the Three Horse Shoes. Landlord John sent for P.C. Arms who tried to take the Irishman to the lock-up at the Town Hall, but the latter was not going to go either quietly or willingly. He was helped in his resistance by a large crowd of mainly Irish onlookers which had quickly assembled and tried to ‘rescue’ Martin from the clutches of the law. The mêlée moved towards the toll-bar where the labourer was wrested free and transported in triumph to his nearby home. His reprieve was only temporary.
Two weeks later, at the Petty Sessions — and being as it was his first offence — Martin was fined only 5s and 10s 6d costs.

John Harvey died in 1884, aged 55, after an unfortunate visit to Nottingham Goose Fair.
He was with his son John junior on Thursday, October 2nd, crossing Clumber Street in Nottingham, when he was obliged to move aside to avoid a horse, only to be knocked down and run-over by a four-wheeled cab driven by Henry Clarke–  and kicked by its horse for good measure. Wounded at the back of his head he was taken to the city’s General Hospital for treatment and returned home that evening.
Three days later John fell into a coma and despite an operation on his skull to extract congealed blood oppressing his brain he never regained consciousness and died the following day.

The inn then continued to be held by John’s wife Mary, who didn’t get off to the best of starts. In October 1885 she was accused by Captain Sandys, inspector of weights and measures, of selling adulterated whiskey on July 23rd. She was adding too much water to the spirit — water which the customers hadn’t asked for !! She was found guilty and fined, but could find some consolation (perhaps) in the fact that she was not the only one — Emily Hofton of the Peacock Inn, John Brooks of the Hand and Heart, John Barker of the Bridge Inn, and Sarah Turton of the Nag’s Head, were also caught on that same date.

Mary died in February 1893, aged 65 — while working on the family farm at Little Hallam.The care of the inn was then taken on by their children, into the next century.

Martin Harvey has kindly added family detail to this:
John Harvey, the landlord of the Three Horse Shoes, who died as a result of injuries sustained when being hit by a horse and carriage in Nottingham, was my great grandfather. His son William was my grandad.
William became landlord of the Three Horse Shoes. He also, I believe, had Little Hallam farm.
He met his second wife, my grandma, when she was a barmaid at the pub. She was 20 odd years his Junior. They had 7 children together and moved to Doncaster to live in the mid 1920s.

Martin mentions John’s son, William Harvey, and it was on November 7th, 1891, that he came to the ‘rescue’ of his mother. She was still a tenant on her Little Hallam farm which was owned by the Duke of Rutland, when a couple of workmen turned up to do a bit of ‘tree-pruning and felling‘ for the Duke. They were George Bramley junior and Alan Walker Blount — both coalminers and Church Street residents, so I suspect they were doing some ‘part-time’ work ? By tradition and law, the top wood was the property of the farm tenant, but the two labourers tried to take it away with them. William wasn’t having this and upset their cart, containing the wood, and from there, of course the argument seemed to spiral out of control — an assault was alleged, with pieces of the wood being used as weapons. In their defence the woodcutters claimed that they had been told to leave enough topwood so that the tenants could repair their fences, but the rest was to be taken away. This wasn’t persuasive enough and both men were fined 20s with 12s 3d costs.

And here is the Inn in later life … 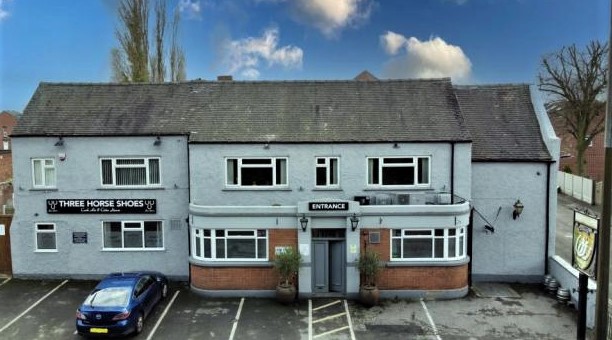 The photo is taken from Derby Road, with Belper Street just visible to the right. Across that street would have been the Miner’s Arms (now a private residence). Little Hallam lies behind the Three Horse Shoes, in the distance.

And we are almost at the end of the road.