We are now at the bottom of Station Road, close to the Derbyshire border with Nottinghamshire … at the Rope Walk.

In 1881 Dr Francis Henry Blaxall, Inspector for the Local Government Board, produced a report on the state of Ilkeston’s sanitary and public health facilities. He identified the town’s privies, water supply and sewers as the most likely sources of the enteric fever which was lately spreading in the town.

As far as the water supply was concerned, Ilkeston’ Local Board supplied public water to about half the town’s houses, within which there were only 31 cases of the fever. However a total of 1340 houses relied on private sources of drinking water — such as private wells and water tanks — and here there was a much higher incidence of the fever; 74 families had become infected, 46 dependent on wells and 28 on tanks. All the wells were exposed to pollution from inadequate sewers and drainage.

One particular well in Spring Grove Terrace was used by several people who later became infected. You can see the terrace in the map below. The Flour Mill at the top stands in Wash Meadow (affectionately known as ‘Johnnies’) and just below it runs Station Road, from middle left to top right. Off Station Road is the vertical route of the Rope Walk — it has the number 559 along it. And off from this are the ten cottages of Spring Grove, later known as Grove Terrace, with their outhouses behind and separate. Across the Erewash Canal, the Brick Yard at the bottom belonged to Samuel Shaw and lies in what was once known as North Field — later nicknamed the ‘Ashes’. 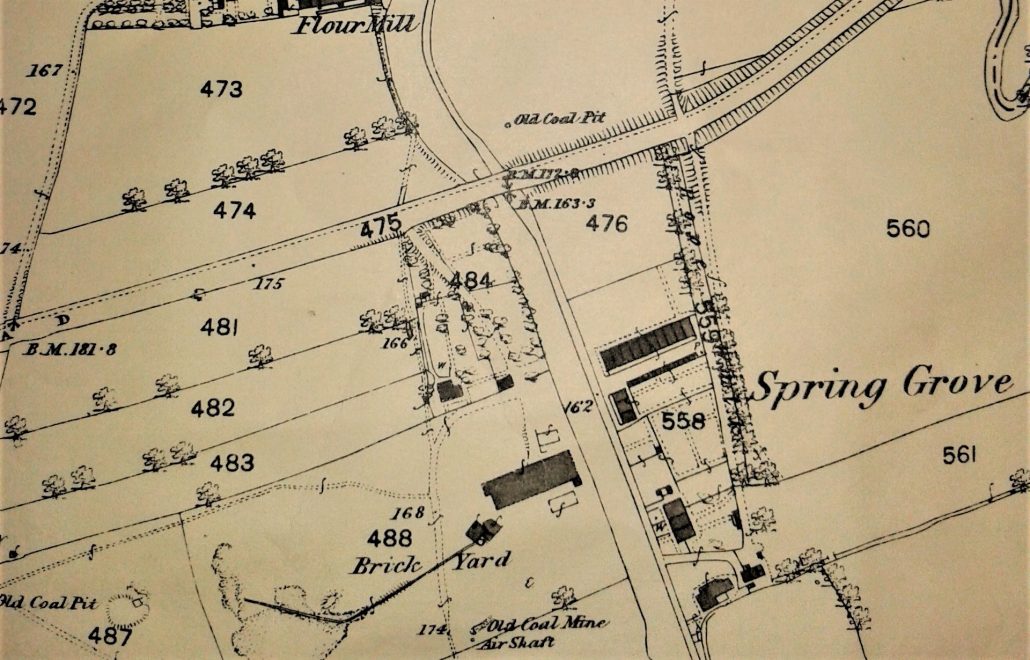 The ten houses were supplied by one well and formed an isolated, remote and tiny community.
Just 15 feet from the well, standing on a higher level, was the nearest privy, while a slop drain carrying the terrace’s sewage to a ditch, ran close by. In September 1880 the terrace recorded its first case of fever and in total, seven affected families suffered 15 cases of disease there. Of the seven families, six got their drinking water from the well. The remaining three unaffected families got water from other wells.
Inhabitants of houses nearby with separate privies, drainage and water supply were also unaffected.

The conclusion of Blaxall’s report was that the water from this particular well certainly contributed to the contagion in this terrace, though the privy and drain might also be implicated.

In 1933 it appears that the cottages in Grove Terrace were owned by John Moss Towson, a farmer occupying Rectory Farm in Trowell and in that year he commissioned work to be done on the premises. 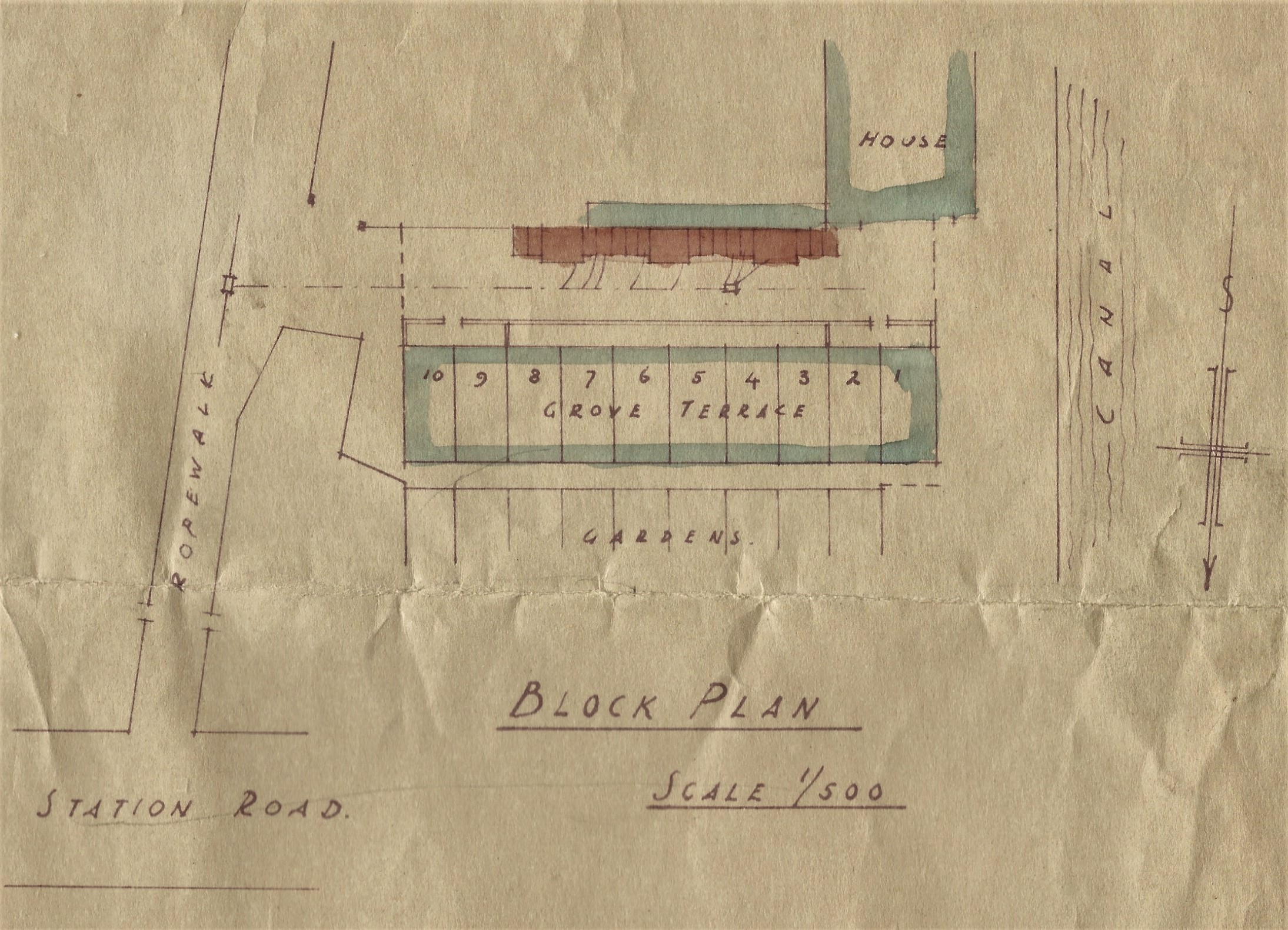 This included demolishing the old outbuildings of the terrace (coloured a rusty red in the original architect’s plan, above, and with North to the bottom) — I don’t know whether these outbuildings were the ones complained of in the Blaxall Report but I do hope not !!  They were replaced by a completely new row of buildings.

It seems that each cottage had its own coal-house while there were only five W-C’s and three wash-houses, all standing in a yard repaved with asphalt.

The brickwork of all the houses was repointed, decayed bricks were renewed, and all doors and windows were painted. The gable ends were repointed, and covered with pitch and tar, while the exterior earth surround was flattened and paved with asphalt. All for a cost of just under £300.

And below is the result …

Front view, with the canal on the right … 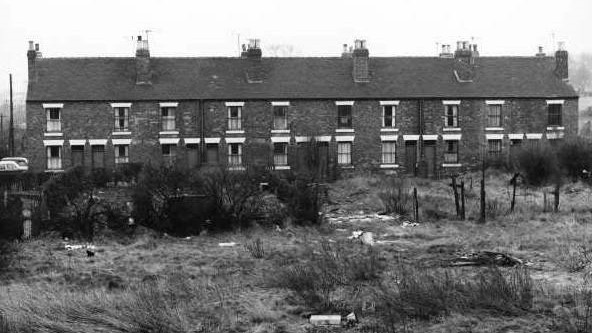 …. and rear view, with the canal on the left 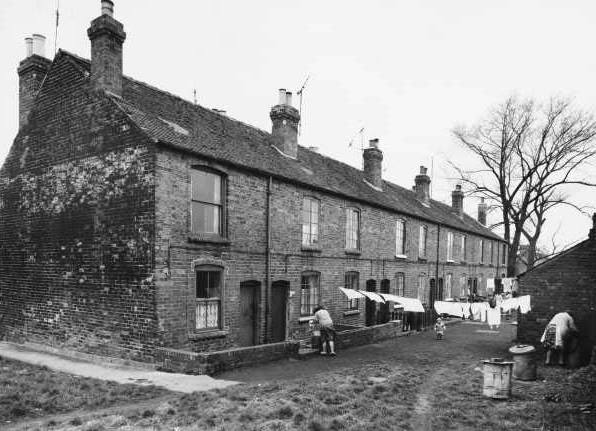 Both photos taken from the Facebook page of Ilson Bygones

Plans taken from the document archive of Jim Beardsley

Retracing our steps up Station Road back towards Bath Street, we come to a narrow side road. … where lived brickmaker Samuel Shaw