Adeline remembered that …
…. at the end of New Street in Burr Lane, was a field which led to the old Slack Road, and over the branch line into another field that finished on the Common, opposite Cotmanhay Road. In the lower field there was for many years part of an old iron boiler. My father told me that there had been an explosion that caused the boiler to lie there. I forget where the explosion had been.

A possible candidate? .. though a bit too late?… and too distant? ….
“On Tuesday afternoon (July 3rd 1877) the inhabitants of the northern end of Ilkeston were startled by hearing a loud report, which was found to be occasioned by the bursting of a boiler at the brickyard of Messrs. Hewitt and Tutin, situate in a field near to Station-road. Both ends of the boiler were blown out, the top of the boiler house was taken off, and the engine chimney knocked down. Fortunately the men and boys at work were underneath the brick sheds, so that no person was injured. Pieces of brick and other debris were hurled a considerable distance, and the consequences might have been much more serious if the locality had been thickly populated”. (NG)

Adeline recalls that ….. there were no houses down New Station Road, except Norman’s old Farm House in a field on the south side leading up to the Park and Hilly Holies.

An Old Resident recalls that between the end of New Street, just past North Street, and Cossall Marsh, there were no houses except Mill House occupied by the late Mr. W.S. Adlington, J.P., and two or three old cottages.
In 1881 Mill House was occupied by mining and civil engineer Maurice Deacon and his wife Adelaide Eliza (nee Bazeley) and was part of the late George Blake Norman’s estate. It included a mill which in 1881 was fitted out as a flour mill but could be adapted for plaster or cement, and stood equidistant from and between Station Road and the Midland Railway line running into the Town Station at the bottom of Bath Street. Its site was approximately at the western end of what was soon to become Mill Street. 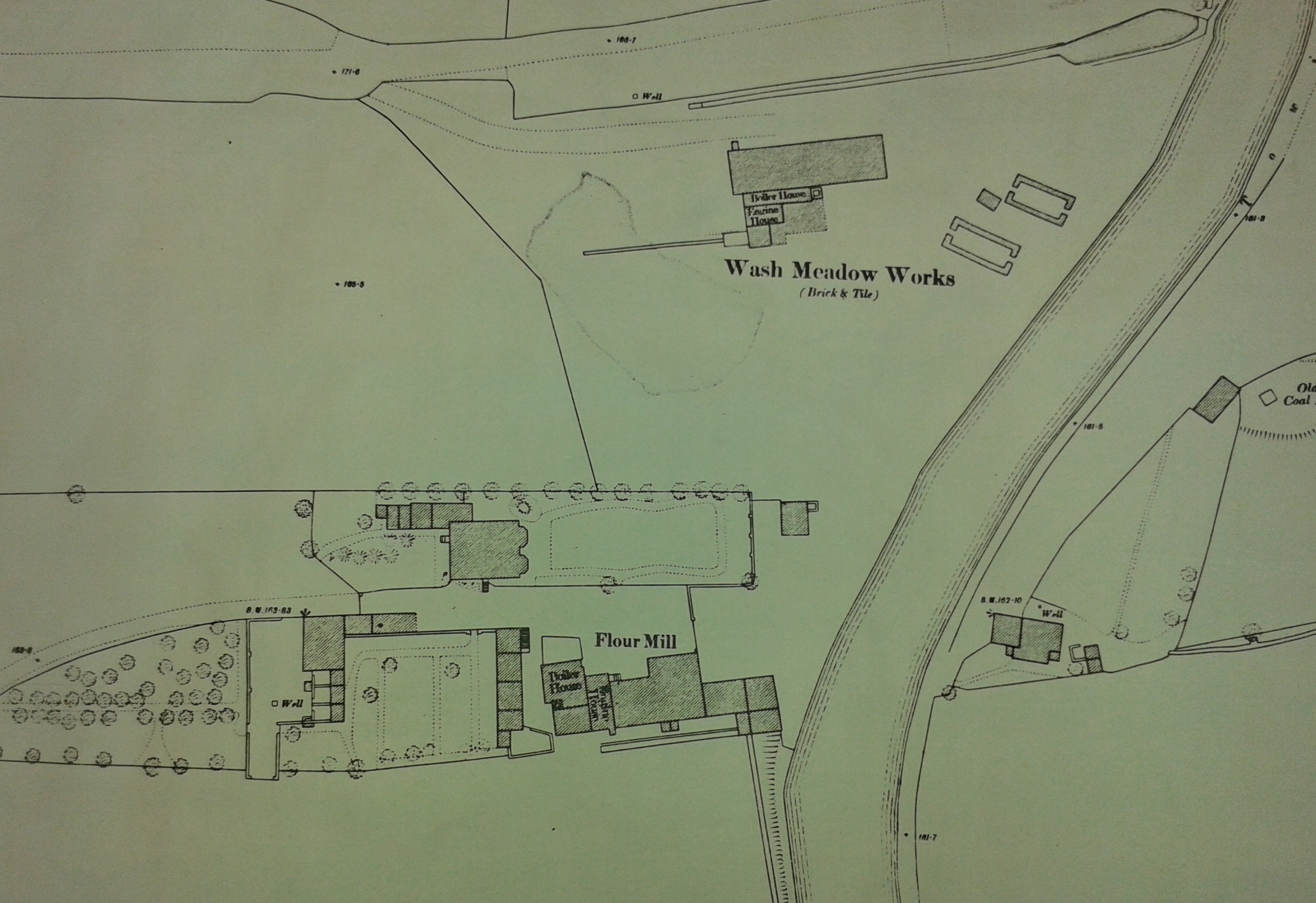 Norman Cottage or Norman House is recorded on the 1851, 1861, 1871 and 1881 censuses, as the enumerator listed Burr Lane and Albion Place.
In 1851 there were three households occupying ‘Norman Cottage’ —  Cossall-born labourer Phillip Tarlton and his family: railway porter Joseph Rusby, his wife Mary (nee Clarke) and his niece Mary Ann Hinde: Ruth Truman, widow of Thomas, and her grandson William Severn Trueman, illegitimate son of her daughter Ann.
In 1861 Norman Cottage was occupied by Elizabeth Dixon (nee Needham), widow of George Smith and then of coal miner Samuel Dixon. She was with her youngest child Mary Ann Dixon, aged 14.
At Norman Cottages were the two families, of journeyman miller Richard Daubney and of Philip Tarlton.
In 1871 the family of colliery labourer James Eyre was at Norman’s House.
In 1881 colliery carpenter Joseph B Hackett and his family were at Norman Cottage.

According to Adeline …. on the canal bank, towards Evan’s Potteries, were a couple of old cottages. Mr. Howard lived in one.
He had two sons. Ben the ‘Orator’ and Alva, three daughters. Martha, who was a pupil teacher at the British School, under Mr. Holroyd. The second became Mrs. Henry Smith. Jane remained at home.

Born at Hempshill near Bulwell in 1810, Benjamin Howard was a son of Thomas and Martha (nee Kettleband?).
He worked as a lacemaker at Stapleford until he left there in the mid-1840’s to come to Babbington Wharf as a coal agent/manager at the wharf. (This wharf was opposite Wash Meadow on the eastern side of the Erewash canal).
Already married to Harriet (nee Allen) and with several children, Benjamin added to their number after his arrival in Ilkeston.

The one child not recalled by Adeline is the eldest one, Thomas the engine driver, who left the town in the 1860’s and moved eventually to Nottingham with his wife, Ilkeston-born Mary (nee Woodward), daughter of labourer William and Ann (nee Reed).

Eldest daughter Sarah was the second wife of Henry Smith whom she married in 1875 (see the tale of George Clay Smith). At the end of the century and thereafter they lived at 5 Gregory Street.

Martha married hosier Samuel Cresswell – also a one-time pupil teacher at the British School in Bath Street — son of boot and shoe maker George and Eliza (nee Skevington), in 1865 and moved to Nottingham and thence to Sandiacre.

Boilermaker Benjamin married in 1865 to Ann Parsons, eldest child of framework knitter Charles and his second wife Mary (nee Campbell). He eventually moved into the clothing and hosiery industry and at the end of the century was trading as a clothier and draper in South Street.

Youngest daughter Jane was the first of the children to be born in Ilkeston, in 1848, and ‘remained at home’. After the death of her father she was still keeping shop at the home which was then 84 Bath Street. And that is where she died in December 1923, aged 75.

Alvah was also a boilermaker and lived with his sister Jane after the death of their parents.

Benjamin’s wife Harriet died suddenly one Saturday afternoon April 1876 as she sat down to tea at their Canal Side home — aged 68.
Benjamin senior converted to smallware and hosiery dealing in the later 1870’s and by 1878 was trading at 88 Bath Street –  just south of Station Road and almost opposite the New Inn.

Richard Hithersay (RBH) recalls him as “a very vigorous and outspoken ‘freethinker’’. He died at his Bath Street home in April 1897, aged 86.

A tiny cottage was built at the side of the line leading to Cossall.
This was occupied by John Allen, the sole porter at the Junction. He married Miss Southey.

John Allen of Desborough, Northamptonshire, was the railway porter who married Frances Ann South of Grantham, Lincolnshire in 1869, shortly after the accident suffered by his colleague, Samuel William Bond, at Ilkeston Junction. (See the Town Station)

Rope Walk aka the Ropery

At the eastern end of what was to become Station Road, close to the river Erewash border with Nottinghamshire and on the eastern side of the Erewash Canal was a collection of houses known as the Rope Walk (or Ropery or Ropery Walk), accommodating up to a dozen households.

One of these families was that of stone miner William Neal, wife Mary (nee Swann) and six children, who had come from Codnor to Ilkeston about 1849.

One day in 1853 William left their three-year old son Walter in the house and returned a short while later to discover him gone. An hour and a half later, a general search discovered the lad drowned in the adjacent canal.
While returning a verdict of ‘accidentally drowned’ members of an inquest jury added a complaint that the occupiers of these houses had no proper road to access their homes and had to use the dangerous tow-path which belonged to the canal company. They hoped that the owners of the houses would provide a suitable road to prevent people using the canal path.

Just after midnight on Saturday, February 17th 1912 a serious fire destroyed Adlington Flour Mills, sited to the east of Springfield Terrace, and north of the Midland Railway branch line from Ilkeston Junction to Ilkeston Town. The mill had been built in 1877 by William Sampson Adlington of Kirk Hallam. As you can see, it was a structure of four stories with a basement, 60 ft. long and 40 ft. wide. Although it contained a lot of valuable equipment, it had not been in regular use for several years. The damage was estimated at £10,000 (today worth over £1m). 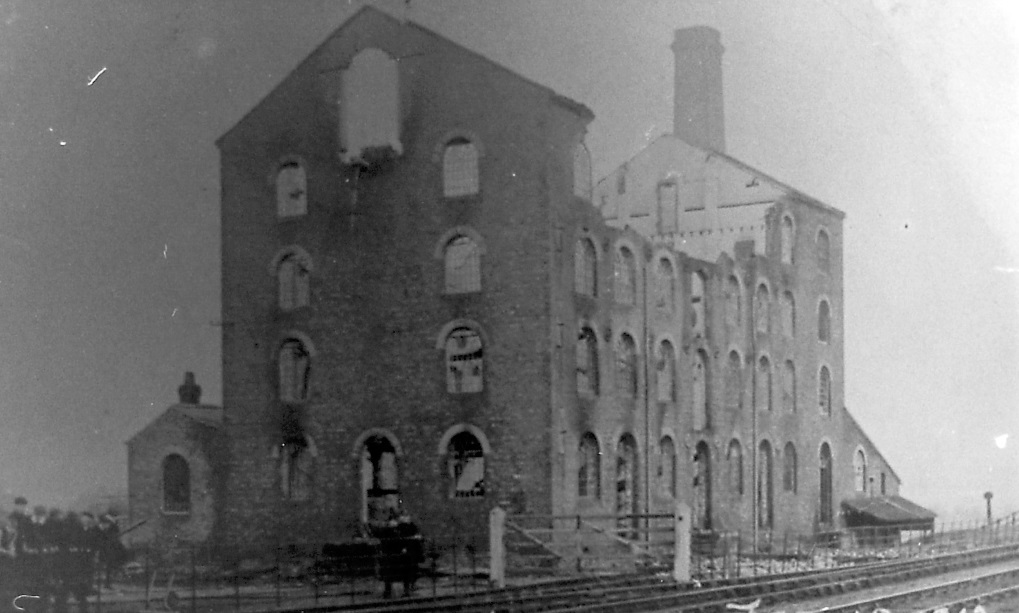 Retracing our steps up Station Road, we come to a narrow side road. … where lived brickmaker Samuel Shaw