To link Club Row with the Hallam family, we first need a very brief family history background on this branch of the family  ….

Francis Hallam, coalminer of Mapperley/West Hallam married Sarah Brentnall at Duffield on October 30th 1797. They had at least 10 children, the penultimate one being James, born in 1817.
Son James Hallam married Ann Pickering at St. Werburgh’s Church in Derby on November 26th 1843. Thomas seems to have been their last child, born in 1859.
He married Mary Ann Moore of Club Row at Ilkeston Ebenezer Chapel in 1888 and when she died in 1903 Thomas remarried, the following year, to Emily Rebecca Meadows, at the Wesleyan Methodist Chapel in Castle Donington.
One of their sons was James Hallam, born in 1913.

Francis Hallam, Mapperley, collier, and his wife Sarah (Brentnal) were producing at least 7 children between 1800 and 1820.
His son James with his wife Ann (Pickering ) had 10 children and one of them was Thomas 1859-1931. I believe this Thomas was my grandfather and he bought the bakery from his brother in 1910.
I was the first child of James Hallam, baker, son of the above Thomas. I arrived during an air raid in the Battle of Britain 5th Sept 1940 in Ilkeston, 2 am.
My father still ran the bakery for his widowed mother when I was born.
Hopefully you have a picture of a bakery invoice dated 1912 from a bakery at 52 Station Rd., Ilkeston that was in Hallam ownership from Victorian times until about 1946. 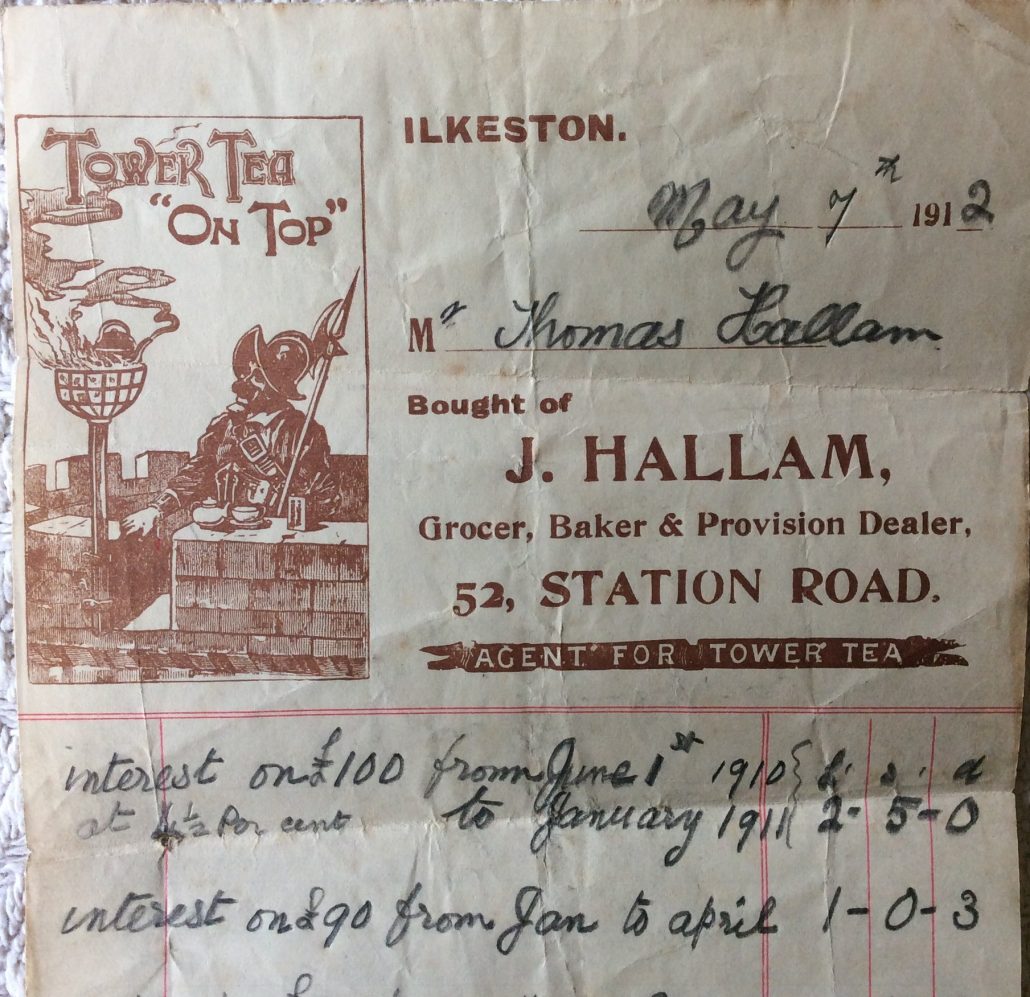 My most treasured possessions to do with Hallam family history are:
1. A 50 page notebook dated 1910 in which a detailed valuation of every item in a bakery and shop at 52 Station Rd., Ilkeston are written by John Hallam and Thomas Hallam. Page one values the contents of the stable in which the horse is £20, the cart £12 down to brushes, combs and a whip.

2. Two 1940 “congratulations on birth of first child” cards, one blue and one pink.

3. A family bible with birth date entries. The Bible was published in 1821 and the first owner was Elizabeth Pickering. It is signed by her in 1821 the year of her marriage (nee Potter). So I think it was a wedding present.
She wrote  “1821 Elizabeth Pickering” inside the front cover and went on to write about 10 lines of a poem warning anyone who dared to “steel” her new bible that they would be cast down below into the fires of Hell.
Her new husband had a sister, Ann Pickering, who married James Hallam and the bible passed into Hallam ownership through her. Pickering, Hallam, and Moore names are scribbled inside.
This family bible will be finished its restoration in 2 weeks. (dated July 11th 2019) 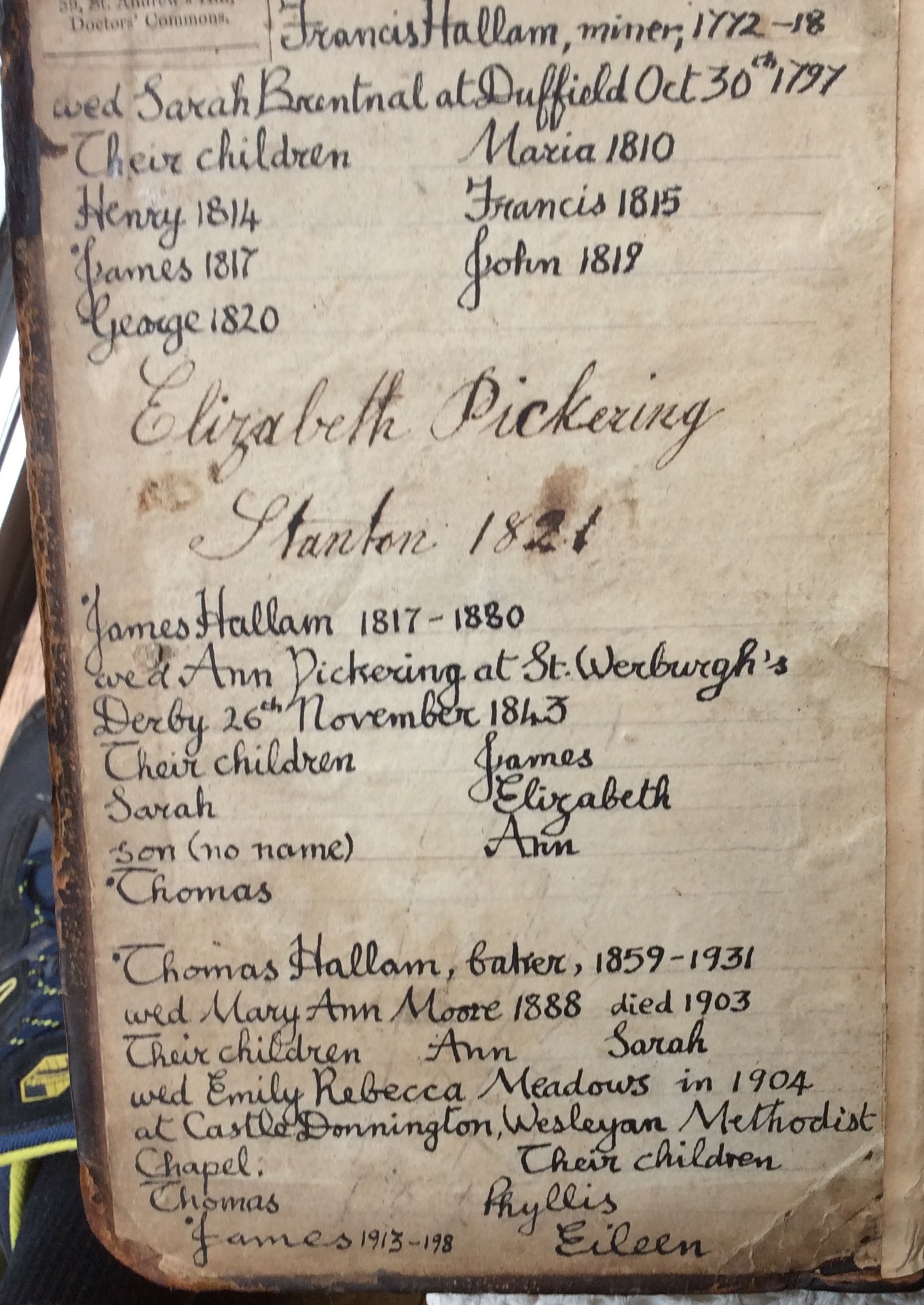 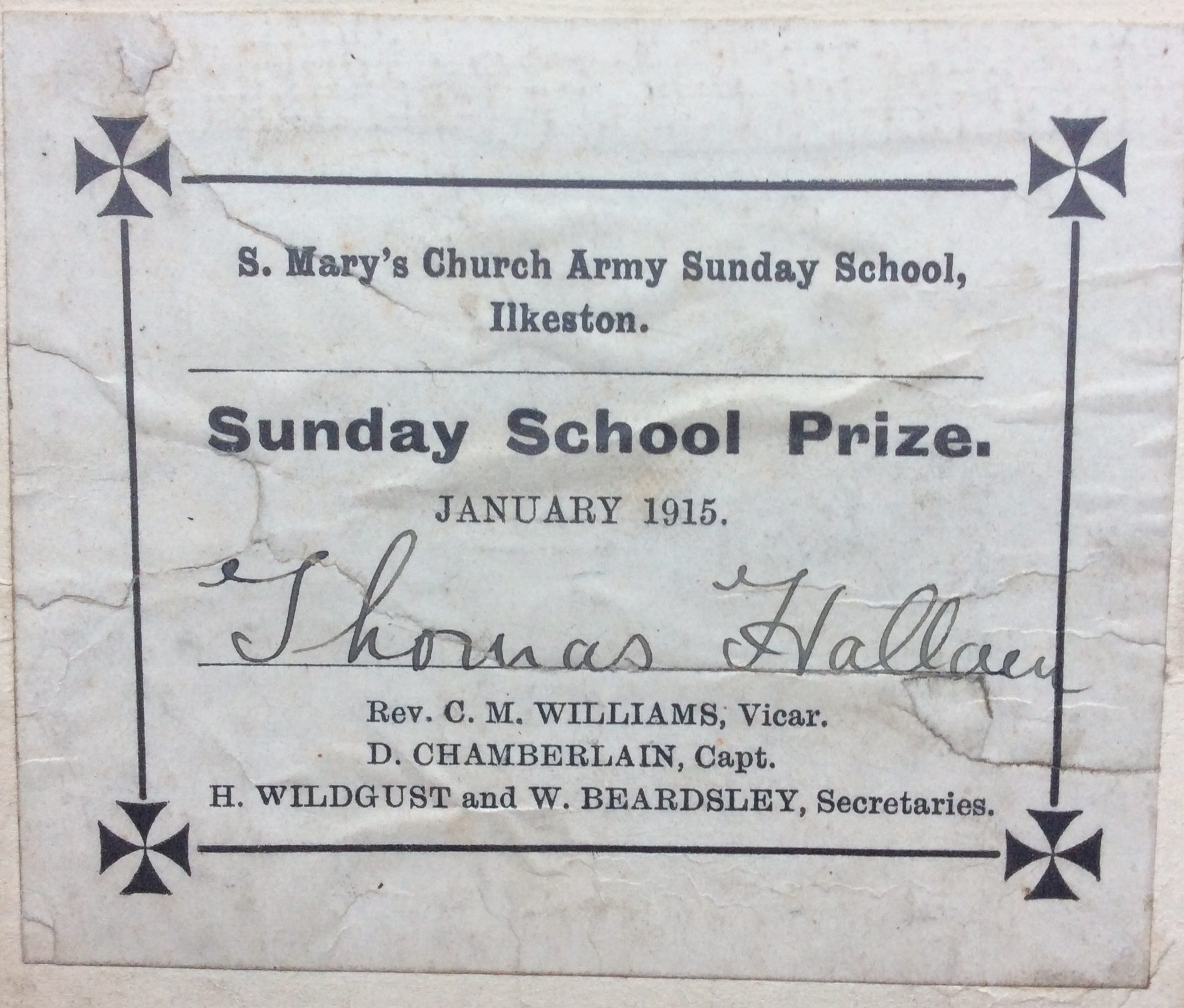 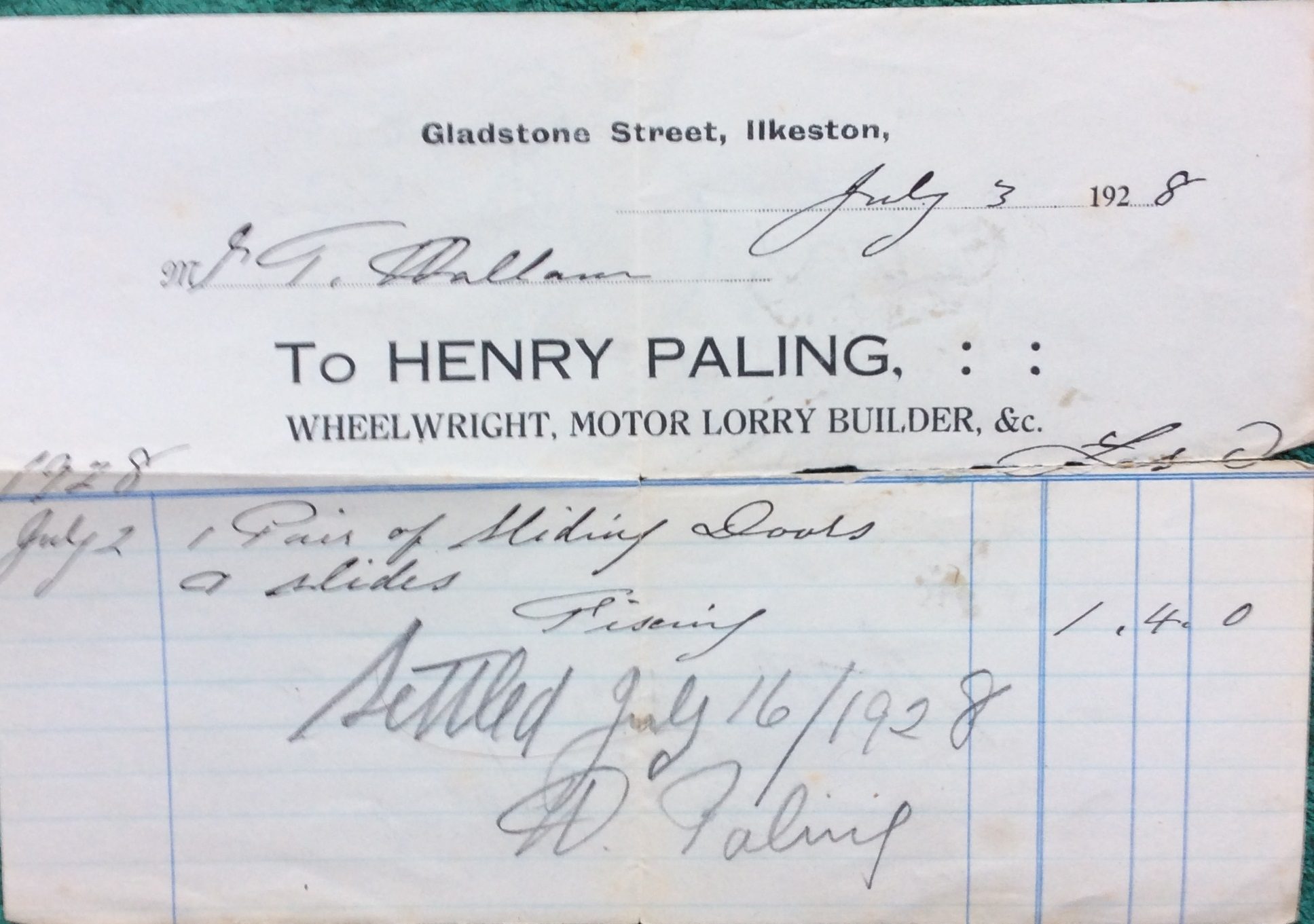 Mike adds …
I would welcome contact with any Hallams who are distantly related to me. So far we Hallams have only produced daughters for the continuation of the line of descent. I would like to make contact with Hallam families who share my ancestral bloodline, who have male children etc.

It might jog someone’s memory to mention that the last Hallam in business in Ilkeston was my father’s sister. Phyllis Hallam owned ladies’ hairdressing shops in Ilkeston. One was at 21 Bath Street. I’m not sure where the other was.
She married Leslie Fox but I think  she ran the shops under her maiden name and he died long before her.
I believe the 21 Bath St. Shop was there before WW2 until the 1970’s.

Can anyone recall the Station Road bakery ?

and now, continuing down Bath Street, on to Mrs. Burgin’s butcher’s shop.