Through the gate and walking along the path towards All Saints Church, on the right is a clutch of Hollingworth graves 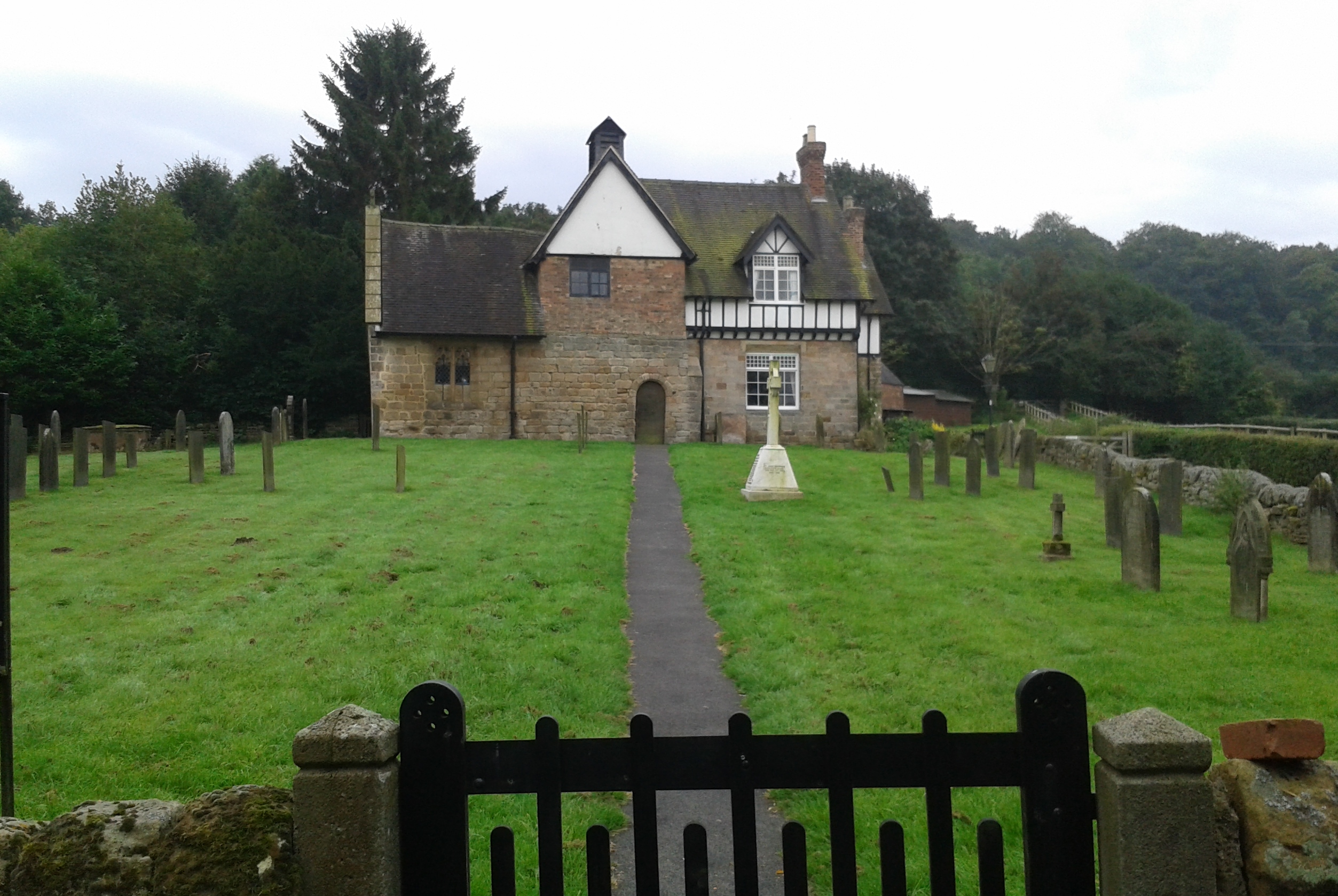 Grave No 1. William, the oldest brother of Benjamin, and his wife Mary nee Snape 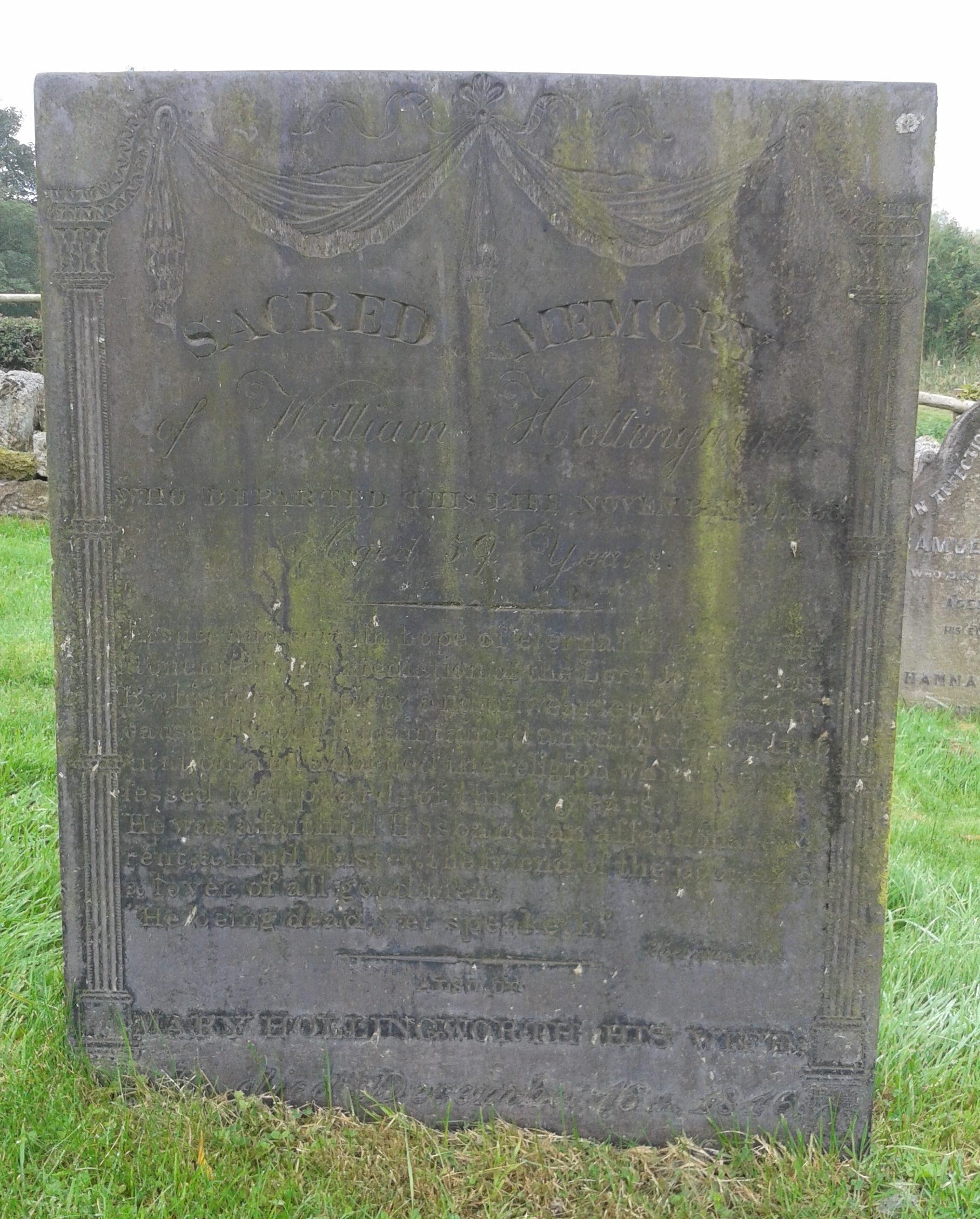 Sacred to the memory of William Hollingworth who departed this life November 29th 1836 aged 59 years.
In sure and certain hope of eternal life thro the atonement of the Lord Jesus Christ by his fervent piety and unwearied zeal in the cause of God he maintained an unblemished reputation and adorns the religion on which he professed for upwards of thirty years. He was a faithful husband an affectionate parent a kind master the friend of the poor and a lover of all good men.
He being dead yet speaketh.    Hebrews XI 4.
Also Mary Hollingworth his wife who died December 16th 1846 aged 65 years

Grave No 2.  bachelor Joseph, a younger brother of Benjamin 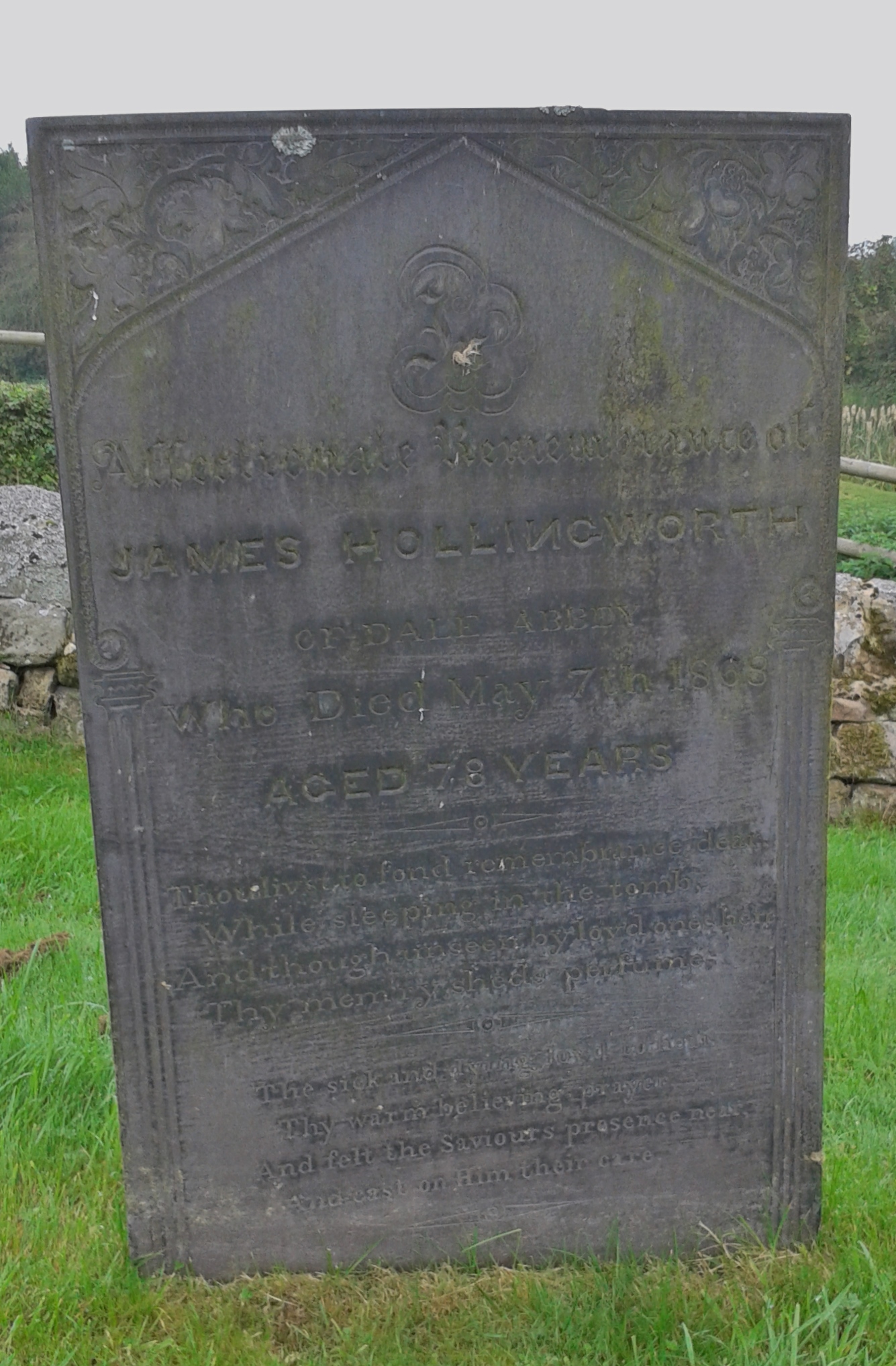 In affectionate remembrance of James Hollingworth of Dale Abbey who died May 7th 1868 aged 78 years.
Thou livs’t to fond remembrance dear,
While sleeping in the tomb,
And though unseen by lov’d ones here,
Thy memory sheds perfume.

The sick and dying lov’d to hear
Thy warm believing prayer,
And felt the Saviours presence near,
And cast on Him their care.

Grave No 3.  James and Mary Hollingworth of Spondon Moor, and son Owen

James was a nephew of Benjamin, and the youngest son of Samuel and Elizabeth nee Winrow.
Mary was born Mary Smith, daughter of William and Hannah; she married James in 1850. 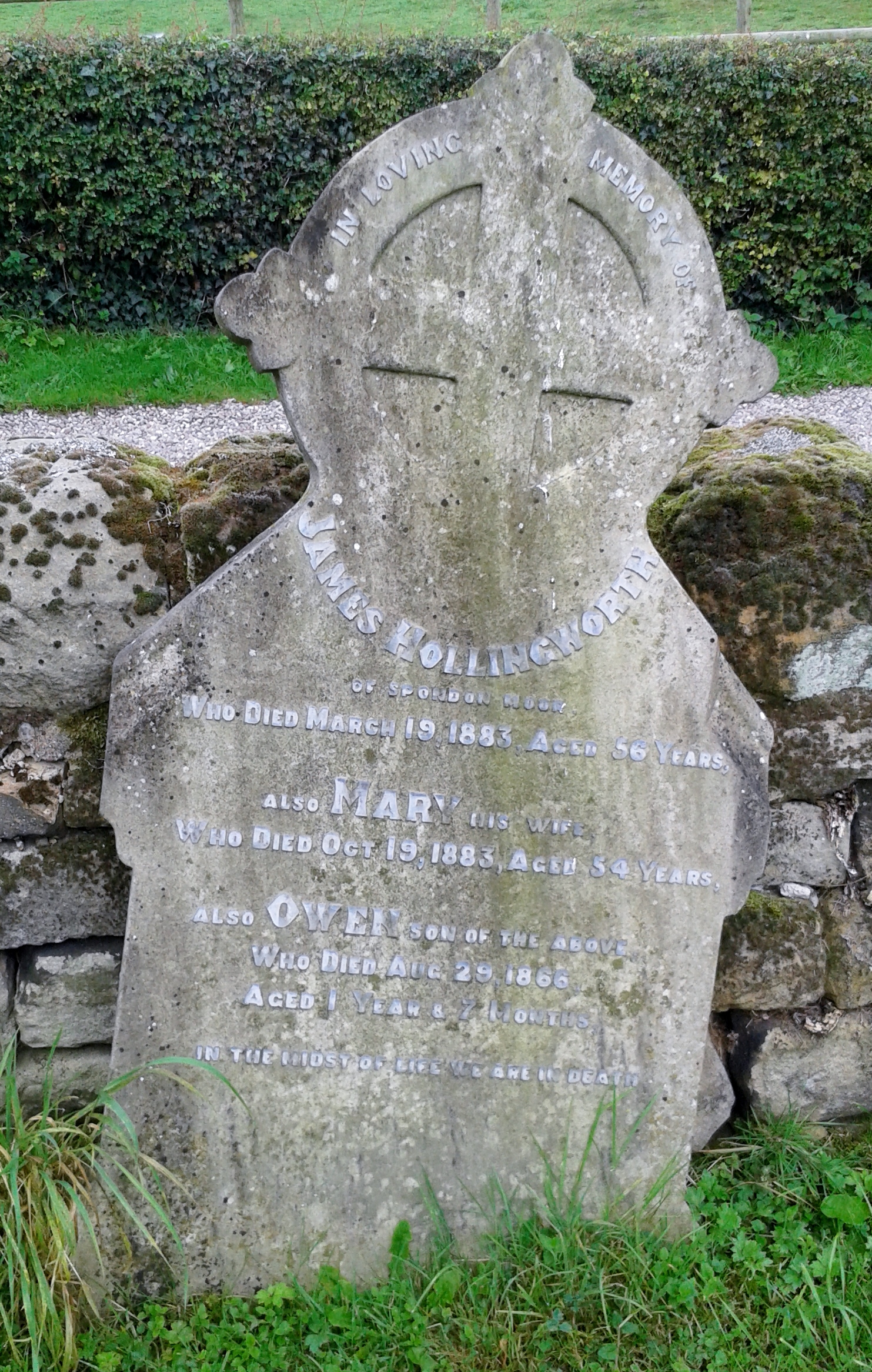 Grave No 4. William and Ellen Hollingworth

William was a nephew of Benjamin, and son of William and Mary nee Snape.
Ellen was born Ellen Frost, (daughter of John and Margaret (nee Statham)?); she married William in 1840 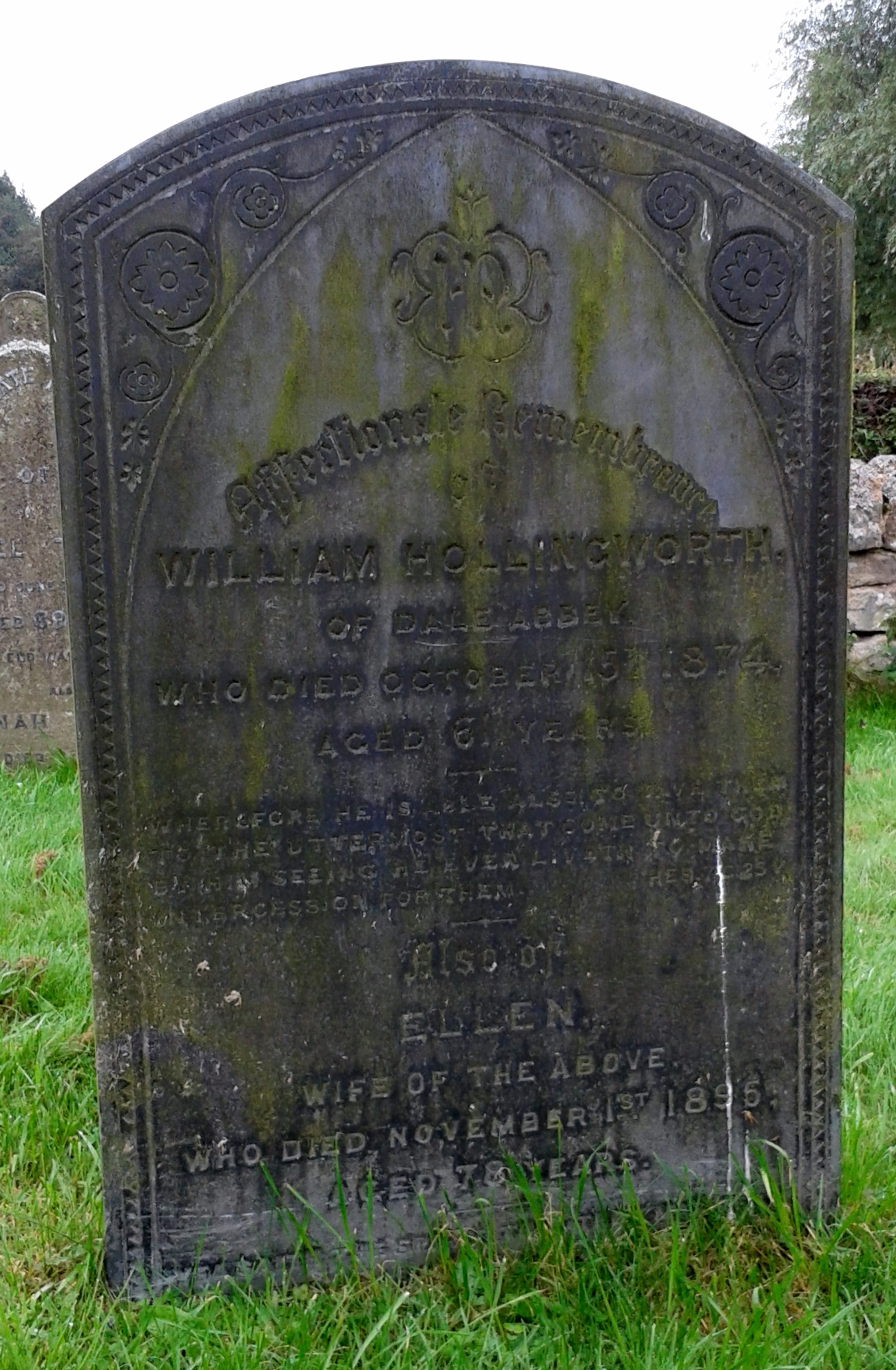 In affectionate remembrance of William Hollingworth of Dale Abbey who died October 15th 1874 aged 61 years.
Wherefore he is able also to save them to the uttermost that come unto God by him seeing he ever liveth to make intercession for them. Heb 7c 25v.
Also of Ellen wife of the above who died November 1st 1895 aged 78 years.
Yea saith the spirit that they may rest from their labours and their works do follow them.

William was the older son of William and Ellen Hollingworth 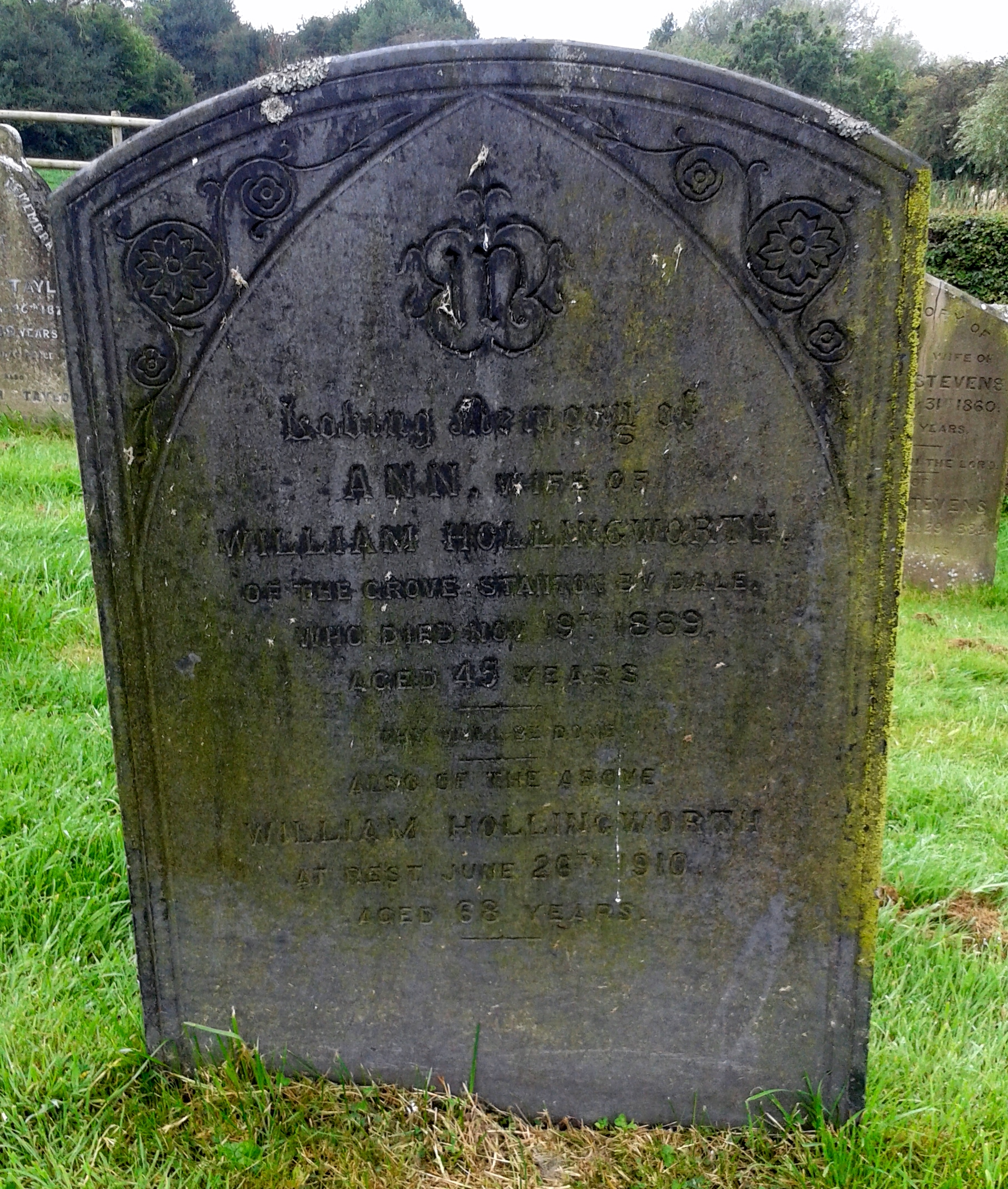 Grave No 6. Thomas Henry Hollingworth, son of Ann and William (above) 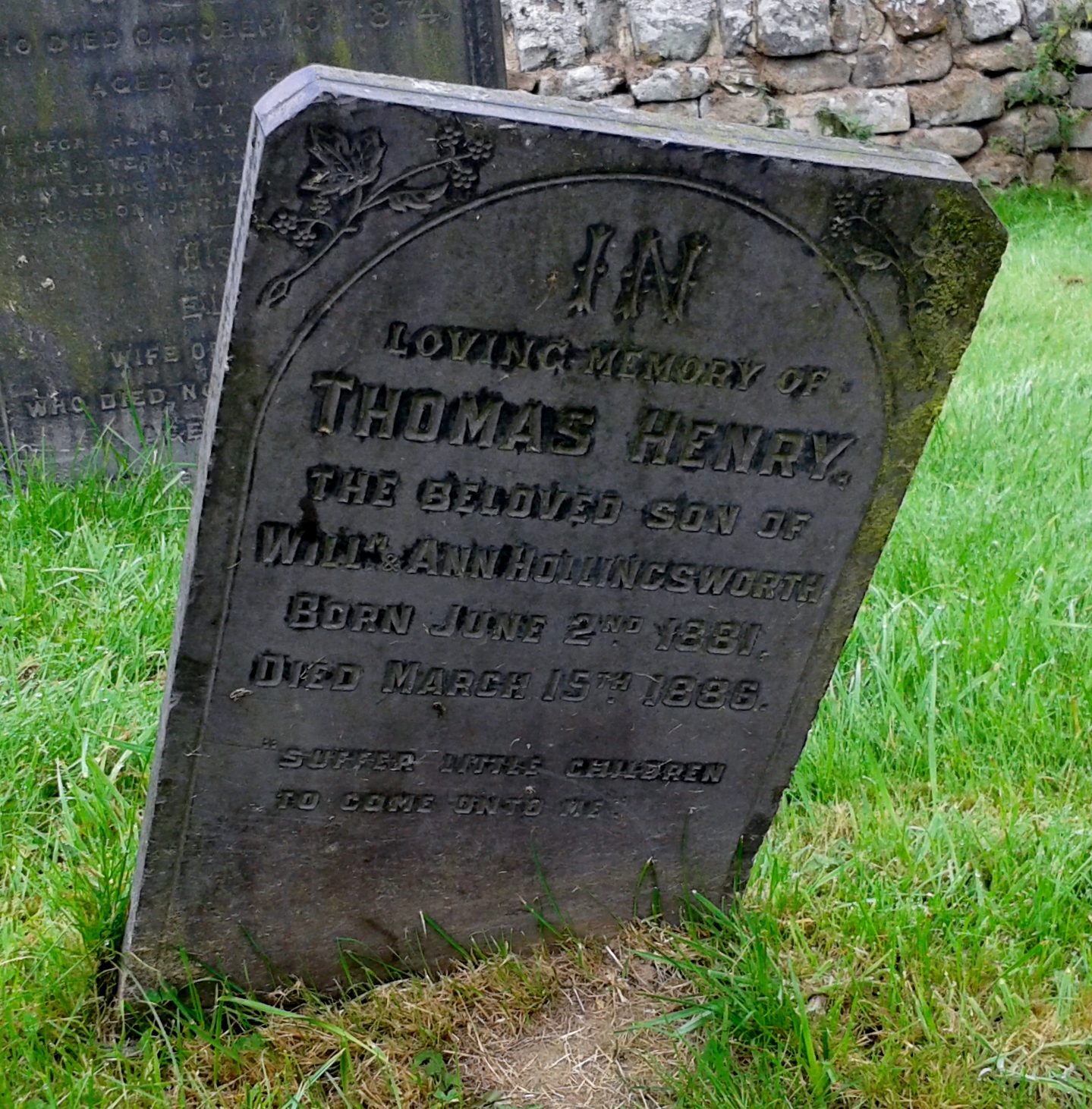 Across the central path, on the left-hand side of the graveyard, two Hollingworth graves can be found.

Grave No 7.  John Hollingworth  of the Carpenters Arms

John was a nephew of Benjamin, and the oldest son of Samuel and Elizabeth nee Winrow 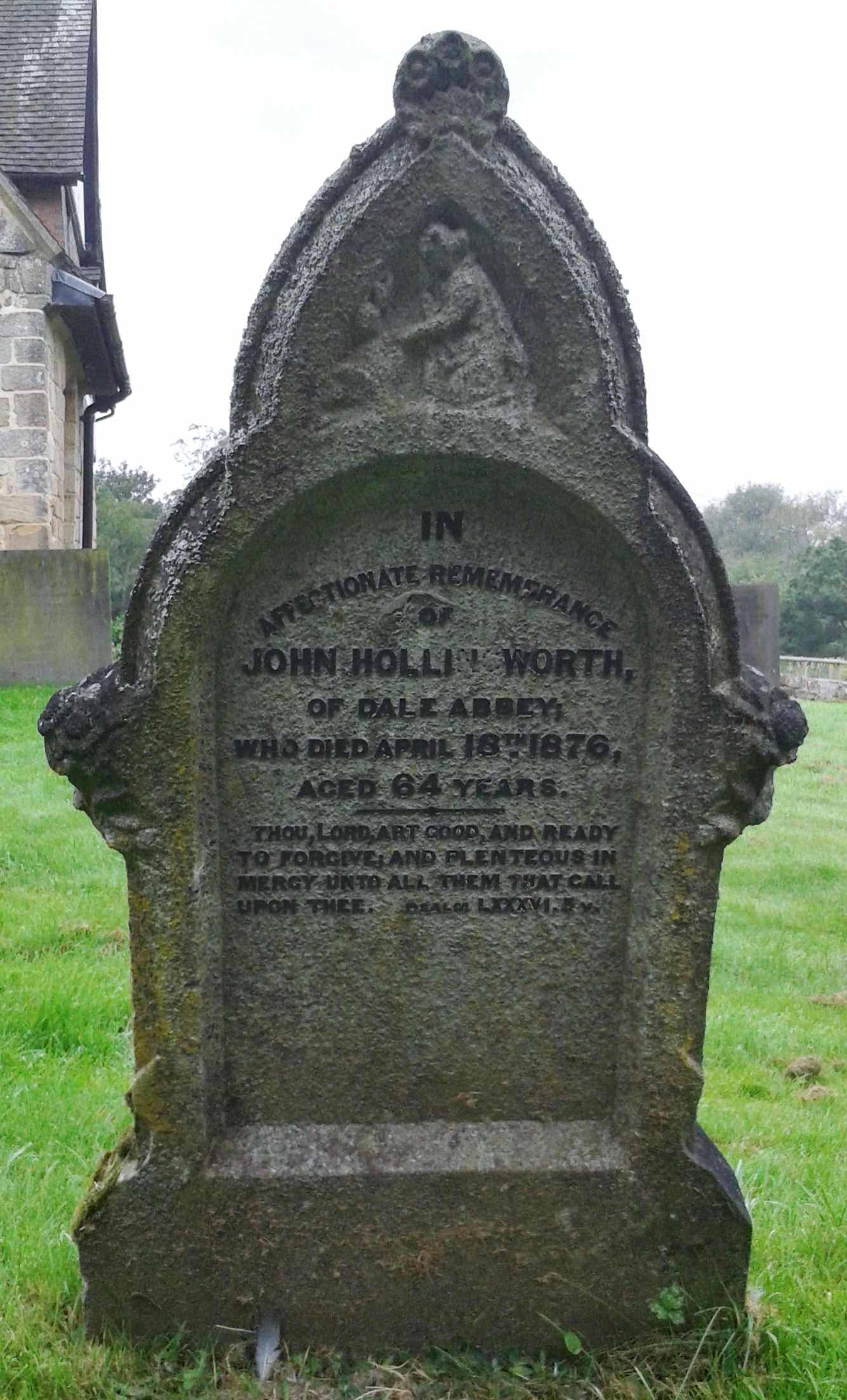 In affectionate remembrance of John Hollingworth of Dale Abbey who died April 18th 1876 aged 64 years.
Thou, Lord, art good and ready to forgive; and plenteous in mercy unto all them that call upon thee. Psalm LXXXVI 5v

Grave No 8. Rachel Hollingworth, only child of John and Hannah nee Wright 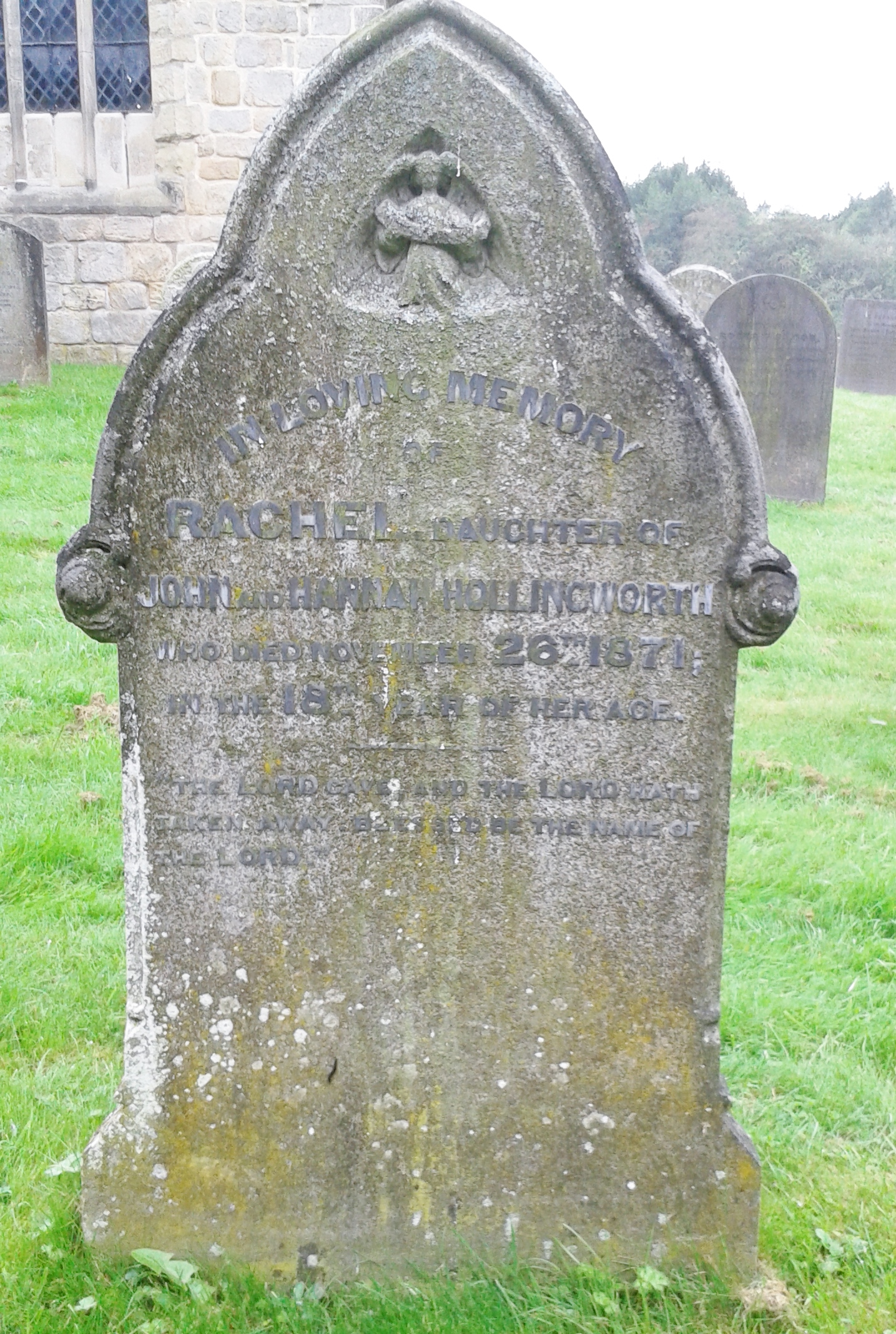 In loving memory of Rachel daughter of John and Hannah Hollingworth who died November 26th 1871 in the 18th year of her age.
The lord gave and the Lord hath taken away, Blessed be the name of the Lord

And now we leave behind the Beardsleys, Birchs and Hollingworths, and  can continue our journey along South Street, towards the Market Place, but take a detour into Weaver Row