Walking from Gladstone Street, Weaver Row came next. On the 1861 census this appears as ‘Cricket Ground’.

In June 1935 Adeline wrote a short account of Weaver Row called ‘A Tribute to An Old Acquaintance’, which was printed in the Ilkeston Advertiser. Much of what follows about the Row is taken from that account. From several points in this description it would seem that Adeline is describing the row in the early to mid 1860’s.

Adeline writes “Weaver Row! Over a hundred years have passed since thy erection in one of the fairest spots in Ilkeston. Thy surroundings were pleasant and unique.
“On the North was the old Cricket Ground, St. Mary’s Church on the hill, and the dear old Cricket Ground Chapel.
On the East were Gardens, and a field leading to the Hilly Holies, those relics and reminder of the time when the Romans governed this country.
“On the West was South Street, with its cottages, Wide Yard – now West Street – and the old Baptist Chapel. (which was in fact on the south)
And on the South were Gardens leading to White Lion Square.”

“The glorious sun shone on thy walls, and the health-giving spaces were before thee. When the wind caused the ripples on the Weavers’ Pool, or intense sunlight sent the shimmering heat upwards, and the sunbeams danced through thy latticed windows, thou must have been a picture of happiness and beauty.
“The Weavers who lived within thy walls were a happy and contented people, and the rattle of their shuttles, as they plied their trade beside the Weavers’ Pool, must have been as music in their ears.
“During our childhood we often passed up the causey, and looked in at thy doors.” 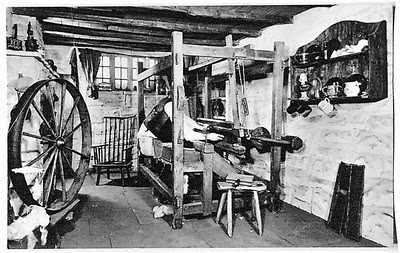 In one cottage …
we should see old Joseph Mason working at his stocking frame, his daughter Jane busy with her household duties, and the cat sitting on the rug at the front of the fire. Sometimes we were invited into the house, and very soon we should be sitting on the squab, nursing pussy, and listening to Jane’s chatter.

Old Joseph Mason was a stocking maker and silk glove maker originally from Thringstone in Leicestershire, who married local girl Elizabeth Smith in August 1830.
Elizabeth died in September 1850, aged 39, leaving Joseph with daughters Fanny, Ann and Jane.
Adeline seems to be recalling a time in the later 1850’s or 1860’s when Joseph was living with his daughter Jane.
In 1871 Joseph was living at 5 Weaver Row and he died there in October 1881, aged 83.

At another door ….
we should see George Topliss, the basket maker, busy with cane and withy; he always welcomed us with a smile and kind words.

This is unlikely to be basket maker George Toplis senior, husband of Ann (nee Dakin), who died in March 1860, aged 75.
It is more likely to be his oldest son George junior, also a basket maker, living with his wife Sarah (nee Potts), daughter of West Hallam-born labourer Simon and Mary (nee Simpson), whom he had married in 1858.
The Potts family was also long established in this area of Ilkeston and in 1871 was occupying 3 Weaver Row.
George junior and his family left Ilkeston in the mid 1860’s to go to Oldham, Lancashire where Sarah died in 1873.
George then returned to his home area and in 1876, at Queen Street Baptist Chapel, married recently-widowed Jane Garton (nee Wilson), daughter of Nottingham lacemaker James and Charlotte (nee Norton).
With his second wife and several of his children and step-children George established a home in Nottingham, where he died in 1897.

Then there were the Aldreds.

Mystery alert! At the moment the Aldreds of Weaver Row are elusive.

and Mr. Harrison, a machinist at Carrier’s

Yet more Harrisons but this is one Harrison I have been able to place!!

Framework knitter John Harrison lived here with his wife Lucy (nee Carrier), daughter of Anchor and Betty (nee George). The couple had married in March 1826.
John played the bassoon at the old Wesley Chapel while their eldest child Henry was a member of the same chapel’s choir. Both were also members of Ilkeston Brass Band.
Henry married ‘a sweet singer’, Ann Turton of Pimlico, daughter of lacemaker John and Hannah (nee Cordon), who “often took part in local concerts along with her friend Miss Adcock …… I used to think, while I listened to their beautiful singing, that they were sure to go to heaven”. (John Cartwright)
Henry’s brothers, Thomas and John, played for Rutland Cricket Club.

The youngest son was Joshua Harrison who enlisted in the 62nd Foot, 1st Battalion Wiltshire Regiment, in 1860 at the age of 18. Army papers show him at that time to be a lacemaker, nearly 5 feet 11 inches tall, just under 11 stones in weight, with light hazel eyes and dark brown hair. He had been vaccinated just before enlisting, was of good conduct and temperate.
His records show service in Belfast in the early 1860’s, then at Aldershot, Devonport, Gosport, Cork, and at the beginning of 1869 he landed at Lucknow in India. By that time he had suffered from several bouts of ulcus as well as scabies, bubo, furunculus, gonorrhoea and ischemia. Nor was Joshua to get any relief from the Indian heat. Throughout 1870 he suffered regularly from hepatitis such that he was brought before a medical board which recommended a change of climate. He was invalided back to England, thus explaining his appearance at 2 Weaver Row, with his father, on the 1871 census.
In December 1872 he was back in India where he was re-vaccinated in 1873. His regiment was stationed at Barrackpore, then Chakrata and Moran, and Joshua’s ill-health continued, with him suffering regularly from either dysentery, hepatitis, dyspepsia or ague. A brief spell in Aden in early 1881 left him with secondary syphilis.
He was discharged in May 1882, still a private, by which time he was ‘intemperate’ though still of good conduct. He was then in possession of two good conduct badges. However his name had been entered in the Regimental Defaulter’s book on 66 occasions and he had been court-martialed six times. In the 1860’s he spent several short periods in army prison (up to two months) possibly for the court-martial offences.

Mr. A. Tilson, who worked at Carrier’s

The Tilson with a South Street connection was Samuel, lacemaker son of Thomas and Mabel (nee Stanley), married to Eliza (nee Hallam), daughter of Francis and Rebecca (nee Hartshorn).
Both their daughters Ann Deborah and Adeline were born in South Street and Queen Street respectively.

and another Harrison. Sometimes we would go to see a new baby, and as a treat be allowed to sit on a stool and hold it in our arms

Then Mrs. Potts, who had the house that stood in the garden, did public mangling.

Daughter of boatman Joseph and Sarah (nee Hawley), Mary Simpson had married Simon Potts, labourer, in October 1830.
Another daughter Sarah was married to George Toplis junior.
Son Joseph spent much of his life — but not uninterrupted — in Weaver Row before crossing the border into Trowell.
On the 1871 census Mary Potts, by then a widow, – her husband had died in February 1871 – was occupying number 3 Weaver Row and died there in September 1876, aged 71.

There was a tiny cottage in the corner, in the bend of Weaver Row, leading to the pump, (a very dark corner too)
Mr. Fred Harrison lived in it. (In those days Harrisons were very numerous).

In the further cottage lived Mrs. Fox.
She had a mangle, and each week we took a basket of clothes to be mangled. As we turned the handle of the old box mangle we watched her delicate hands fitting the clothes on the sheet, then placing the bright rollers across, which wrapped the sheet tightly. Then we would turn the handle until we reached one end of the box, and Mrs. Fox would lift out one roller, and slip the fresh one under.
Sometimes we would turn the handle quickly to see how many times we could get from end to end before Mrs. Fox was ready with a fresh roller. When we did this she would say in her quiet way; ‘If you would turn the handle slower, the clothes would be mangled better’.
After paying 2d, 2½d or 3d, according to the number of clothes mangled, we would pass down the causey going to our own home.

Eliza Barnes was a daughter of builder and stone mason Job and Hannah (nee Shipman) and married William Fox, needlemaker son of Joseph and Hannah (nee Paling) in December 1849. At the time she was pregnant with their daughter Eliza, born in 1850.

William Fox had been married twice before, the children of these marriages being son Isaac (born in 1826) and daughter Hannah (about 1837). And living at Kensington was his other daughter Ellen Smith (1839), the result of his relationship with Sarah Smith (nee Critch), framework knitter and wife of John Smith.

The Fox family continued to live at Weaver Row and when pregnant daughter Hannah married William Baker in April 1861 they too found a home in the Row for a few years, before moving into Gladstone Street.
So did son Isaac after his marriage in February 1854 to Stapleford-born Phoebe Choulerton, daughter of warp hand Thomas and Lucy (nee Daykin).

William died of chronic bronchitis in Weaver Row in October 1879, aged 72, and Eliza in September 1890, suffering from the same illness, in Gladstone Street, aged 81.

But time does not stand still. The weavers and their trade passed away, and another generation took their place. Buildings sprang up around thee, the Weavers’ Pool disappeared, and gardens took its place.

Thou, Oh Weaver Row, hast had a long life and now it is feared that thou hast outlived thy usefulness; thy rooms are too small, thou art not healthy, in fact thou hast been called that odious name ‘A Slum’, and may be condemned some day. But when the chisel and hammer in the hands of the housebreaker have done their work, and the place whereon thou now standest knoweth thee no more, we shall still have a niche in our memory for thee.
And now, Weaver Row, thinking of thee as thou wert in those far-off days of our childhood, when attracted by thy freshness and beauty, also by the friendliness of those homely people who dwelt within thy walls, we bid thee farewell.

Weavers’ Pool lay approximately at the site of the old Ritz Cinema, used for skating when the water froze in winter, and as a playground for the children of the area.
John Cartwright was one such child.
“On that dirty water I have had lots of fun when the ice would bear, and in it when it would not!
“I recall one incident in connection with this pool. Having a lad named Hithersay on my back, I backed up to the side of the water to give him a fright, and succeeded so well that he went headlong into the water. I got him out, squared him, took him to his mother, explaining that her son had fallen into the water, and that I had got him out ! The mother was proud of me and never knew I was at fault; but that lad – well, he was ever afterwards my master. Shortly after, I was driving a horse and cart, and he wanted a ride. I whipped him off and he cried out, ‘If you don’t let me ride, I’ll tell my mother’. I let him ride. ‘ Conscience makes cowards of us all’”.

The Hithersay lad was probably James, son of James and Ann (nee Bancroft), who had a grocer’s shop in South Street. He was sadly found drowned in the canal at Trowell, almost 40 years later, in 1881.

Later the Sudbury family built a grocer’s shop there, close to Birch’s joiners.