Accident Alert: October 1st 1887
Travelling down Nottingham Road at a very rapid rate, close to the junction with Regent Street, William Ogden, a printer who lived in Station Road, turned round to nod to a chap he knew by the roadside. Not very clever !! He was pitched into the road, rescued and carried to a nearby house where he lay unconscious for several hours — despite the ministrations of his wife and Dr. Tobin. He recovered slowly.
The condition of his bicycle was not reported.

On the previous night, riding down Derby Road, a young lad named Daykin of West Hallam suffered a similar accident. The india rubber tyre on his front wheel came loose, causing the lad to be thrown over the handlebars. He sustained injuries to the head, neck and wrist. 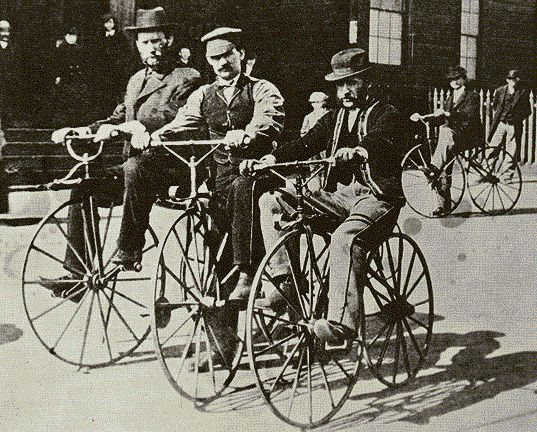 Pedestrians beware !! April 23rd 1891. George Hewitt was summoned for riding a bike at a furious pace on the town's principal street after dark, though he did have a light on the bike -- this street being Nottingham Road. George had been lent a pneumatic tired machine for the first time, and was seeing how fast he could go -- 14mph said the police, 4mph argued George. The magistrate remarked that this was becoming a common offence, and George was fined 10s including costs.

Leaving behind Stanton Road, we are now walking down the western side of the road, out of White Lion Square. The map below shows this area about 1866 (We start at the top, middle) 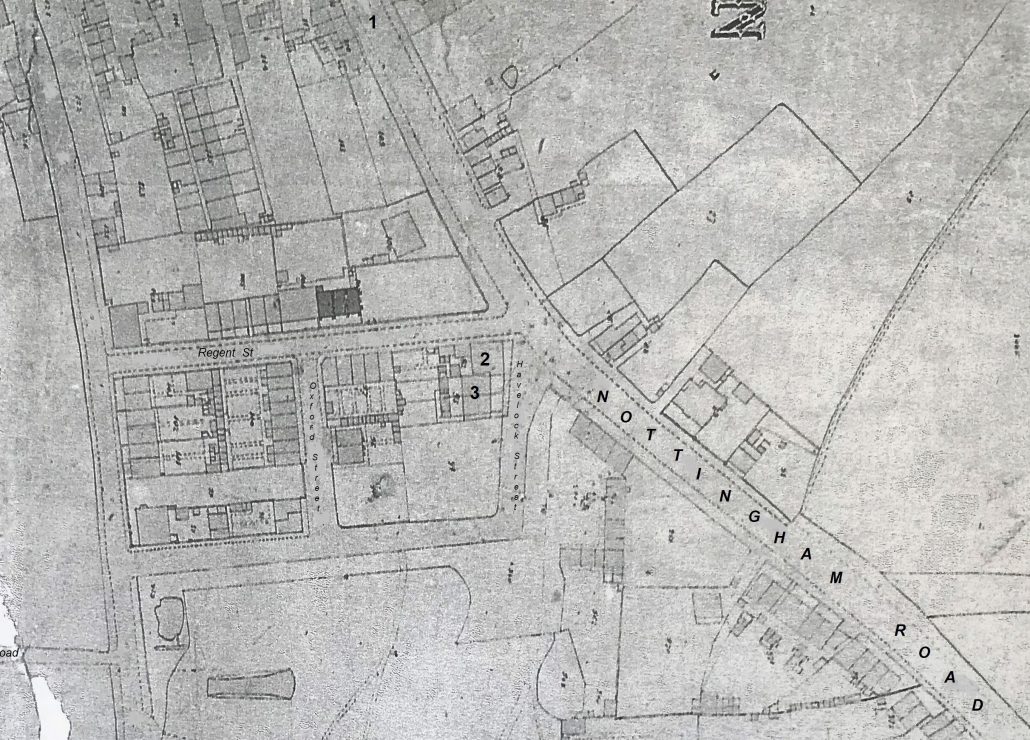 A licence to keep a lodging house for nine lodgers at 109 Nottingham Road was granted to Joseph Harrison by the Local Board in 1872. A lodger was defined as ‘a comer and goer’.

Joseph was the son of George, framework knitter of  Park Road, and Elizabeth (nee Harrison), and in June 1859 married Eliza Bostock, daughter of Samuel, coalminer of Bath Street, and Sarah (nee Curtis).

In the road leading to Hobson’s field and house was Baker Marshall’s shop, …. recalls Adeline

We have previously met William ‘Baker’ Marshall. (number 2 on the map)

Joseph England was born in Alfreton in 1840, the son of saddler Joseph and Frances Elizabeth (nee Mee) and thus was tied to the Haynes family of Station Road corner.

He was a leading performer for the Ilkeston Philharmonic Society whose first concert was given in December 1860. In that concert and presiding at the piano, he executed Talexi’s ‘Grand Military March’ in a masterly manner and showed taste and expression in rendering ‘Sunshine and cloud’ and ‘Excelsior’, for both of which he was ‘rapturously encored’. Such was the assessment of the Pioneer’s ‘music critic’.

Joseph advertised pianoforte and singing lessons at Bath Street premises, and harmoniums for sale or hire. 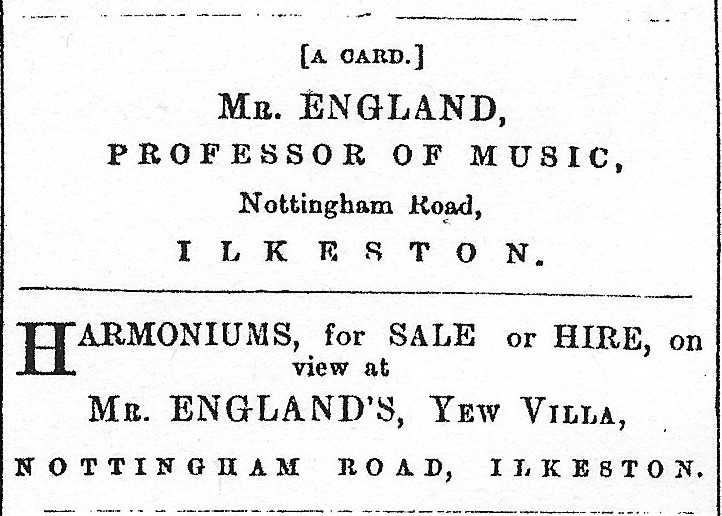 Adeline recalls a visit to a concert: “I was a scholar at the Cricket Ground Chapel and I remember going to a concert, when blind Mr. England, a music teacher in the town, was the pianist. I was seated in the front pew over the entrance and thoroughly enjoyed in my childish way watching Mr. England’s fingers travelling over the piano keys, and wondering, he being blind, how he found them all”.

“And no one can sing to the pews like Blind Joey E” (adapted from Bob Dylan).
Joseph was also an accomplished singer and took part in several local concerts in the 1860’s.
After one such concert held at the British School in 1864, where he sang Longfellow’s ‘Excelsior’ (music by Maria Lindsay), the Pioneer was drawn to admit ……
“We have heard this song both in public and in private, but never heard it with more genuine satisfaction than when listening to Mr. England”’.
It went on; “The music is quite within the compass of Mr. England’s voice, and was tastefully executed throughout. The youth’s progress up the Alpine height was watched with eager interest, and the singer’s modification of voice as the youth’s utterances were less and less distinctly heard, until the final whisper, gently falling upon the ear from far up the height, was artistically done and had a most telling effect. This song was loudly and deservedly encored”.
Joseph was accompanied on the piano by his wife.

If you have forgotten ‘Excelsior’, the poem begins…
The shades of night were falling fast,
As through an Alpine village passed
A youth, who bore, ‘mid snow and ice,
A banner with the strange device,
Excelsior!

At the beginning of 1868 a sale was advertised at Yew Villa, Nottingham Road and included items of Music Room furniture, a piano in rosewood, a very superior harmonium with two beds of keys and pedals and hand and foot blowers.

After living most of the 1860’s in Ilkeston the England family eventually moved to Hastings, Sussex, via Alfreton, about 1868 and there Joseph died, at the family home of 57 St Mary’s Terrace, in November 1870.

Mrs. Raynes and her daughters (lived) in the other.

Mrs Raynes was born Elizabeth Wild in 1819 at New Radford, Nottingham, the daughter of printer Henry and Rosanna (nee Shaw).

In 1850 she married Joseph Raynes junior, the son of Joseph and Lucretia (nee Shuttlewood), and who was born in Loughborough although the family moved to Nottingham where Joseph junior worked in the lace trade.

The family came to Ilkeston in the late 1850’s.

The 1861 census finds them living in South Street when Joseph was a worker at the Stanton ironworks. (See Gladstone Street to Weaver Row).

And now for more music, this time with the musical Wardles