Leaving behind the Carrier mysteries “Regent Street was next” … recalls Adeline.
The area of Regent Street and Oxford Street was known as ‘Monkey Park’.
Some of its buildings were initially known as ‘Little Peck Row’ with a pair of cottages named ’Fair Dinkum’. 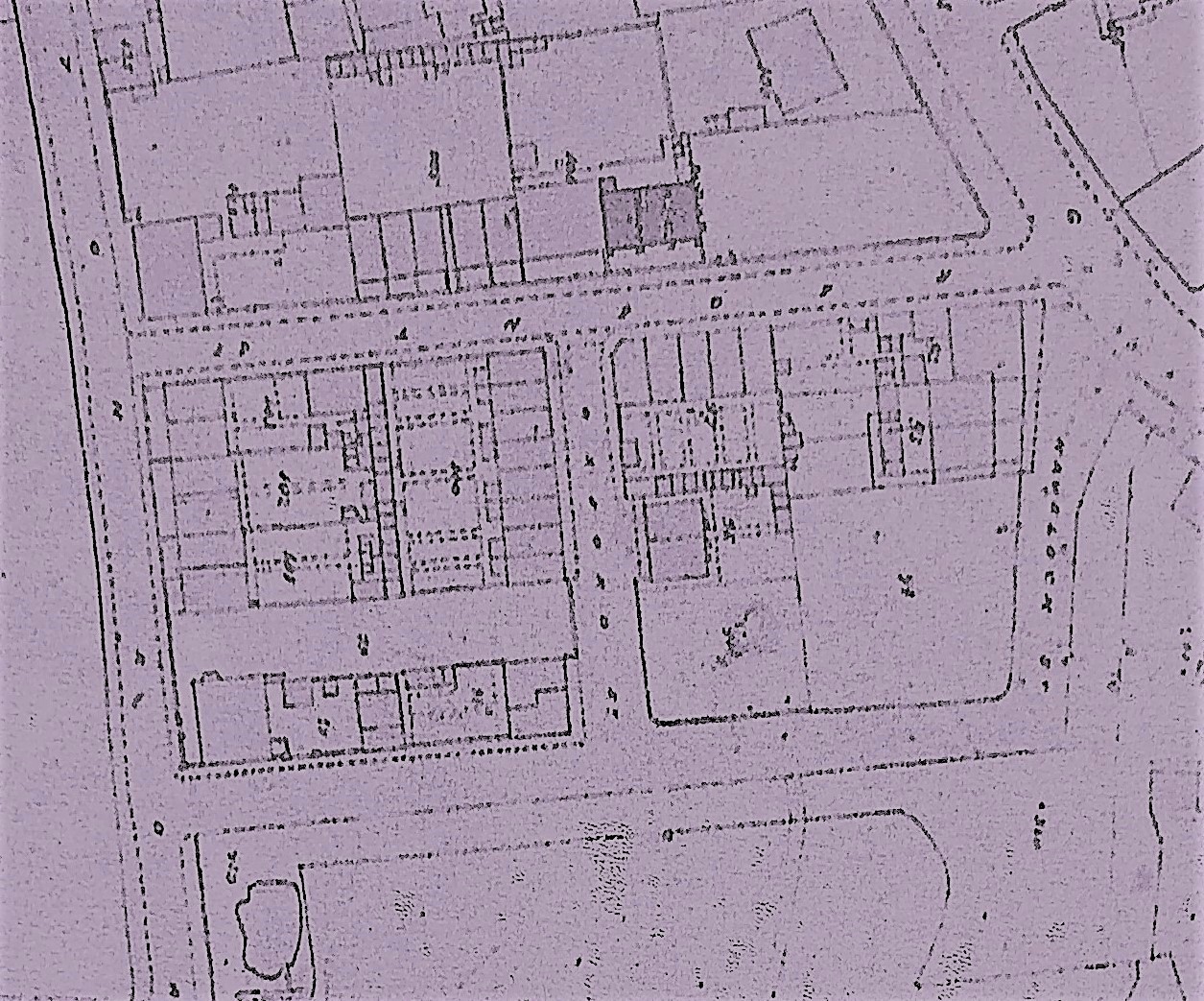 This is part of the Local Board Map of 1866, north being at the top, and so the name ‘Regent St’ is upside down. Havelock Street is named on the right. Stanton Road is extreme left and Nottingham Road is extreme right.

Carpenter Joseph Richardson was the son of John, lace maker of Anchor Row, and Ann (nee Allen).
Sarah Bostock was the daughter of John, framework knitter of Pimlico, and Ann (nee Parrot).
Joseph and Sarah married in February 1853 and their only child John Allen Richardson was born later that year. He grew up in Regent Street and became a pupil teacher.

Son John Allen left Ilkeston in the 1870’s and married Laura Hannah Giles of Chelsea in 1878 and a short time later moved to Folkestone, Kent as a schoolmaster. He lived in Kent for the rest of his life.

“The cross street was occupied by several people. Mr. Brakes, miner, lived there.”

The cross street was Oxford Street which connected the mid-points of Regent Street and Havelock Street.

And here – at number 1 —  lived William Henry Brakes, bricklayer, originally of Whittlesey, Cambridgeshire.
He married Sarah (nee Allcock) at March, Cambridgeshire in 1849 and in the early 1850’s moved south to Edmonton, London and then north to Eastwood, Nottinghamshire, before arriving at Ilkeston about 1857 to live initially in Oxford Street.
Son Harry was their first Ilkeston-born child, born in April 1858.

All his working life William Brakes was a bricklayer.

January 15th 1891, at Ilkeston Petty Sessions .. John Ingall, printer, and John Grady, coalminer, of Oxford Street, were charged with failing to abate a nuisance, by neglecting to empty an ashpit after having had notice to do so --- fined 2/6d and 10/6d costs, each.

Born about 1795 in the St. Mary’s parish of  Nottingham, William Marshall was trading there as a baker when he married Maria Dance in October 1818. She was the daughter of Isaac and Ann (nee Key)

By 1841 William was in Kensington, Ilkeston.
He traded for some years in the Market Place before, by 1857, moving into Regent Street.

“Returning on the upper side of Regent Street the first house was where the Catholic priest lived.”

In the early 1860’s Freeman’s Journal and Daily Commercial Advertiser understood that Ilkeston was ‘thickly populated‘, with a substantial group of poor Irish Catholics, many of whom were employed at the extensive collieries and furnaces in the neighbourhood.

The 1851 Ilkeston census lists 59 persons born in Ireland while the corresponding number in 1861 is just over 150. The members of this Irish community had neither chapel nor school-house to serve them, ‘the nearest being no less than eight miles distant’ – at Nottingham.
There was therefore no resident priest to serve Ilkeston’s Catholic community.

In 1858 the Right Reverend Richard Butler Roskell, Catholic Bishop of  Nottingham, had appointed Father Charles William Tasker as this community’s resident pastor. In his letter of appointment addressed to Father Tasker and dated February 2nd 1858, the Bishop wrote that “there are upwards of 500 Catholics in Ilkeston, and its immediate neighbourhood, without a chapel or even a school to meet in …. You must first exert yourself to assemble the people in the best room you can hire for the purpose; and gradually, through the charity and alms of the faithful, you must strive to raise funds to erect a suitable school and chapel”. (quoted in Treacy)

A contemporary of Cannon Tasker’s (Arthur McKenna, below) recalled, in 1890, knowing him for 30 years — “Cannon Tasker began his missionary life by working among the colliers at Ilkeston. At that time there was no church, no presbytery, nor any means by which mass could be celebrated at Ilkeston. He believed that Cannon Tasker went there thinking he could get a room anywhere he liked for the purpose of holding services, but his first experience was that he was completely boycotted — they were afraid to let him in. There was one landlord who let him have the clubroom of the inn for services … there was no proper staircase to the room, and entrance had to be effected by means of a ladder from the outside. For some months he worked at that mission, and created a very kind and generous feeling towards Catholics in the neighbourhood …. Then he suceeded in becoming the tenant of a small factory, but as the little room upstairs was not large enough to accommodate the whole of the congregation, a plank was lifted out of the floor, so that those in the room below might hear”.

Thses recollections are echoed in Treacy, who describes that, for some time the club room of a local public-house was used ‘to offer up the holy sacrifice’ before an old disused lace factory in Nottingham Road was hired with a ‘miserably wretched room in it fitted up as a chapel’.

Then in April 1860 Father Arthur McKenna came to Ilkeston and “with a zeal becoming a priest of the olden faith, he set about at once to raise funds for the erection of a church in honour of the Blessed Virgin Mary and St. Thomas of Hereford”.
The 1861 Census finds him living at Kensington with his housekeeper Jane Ridge.

In his efforts to solicit subscriptions on behalf of the new mission at Ilkeston, Father McKenna travelled to various parts of England and then to Ireland where his efforts met with limited success. However he seems to have raised sufficient funds to purchase a house suitable for a presbytery and enough land in Nottingham Road for the erection of a Catholic chapel.
The land was duly purchased in July 1861 at a cost of £140.
“This will be the first Catholic church built in Ilkeston since the Reformation…. The old parish church of the town, once Catholic, was also dedicated to the Blessed Virgin but since the Reformation it has been for Protestant worship”.

As construction work was about to commence, the Pioneer expressed the wish that “the building will be an improvement on the many ecclesiastical structures raised in this town!”. Up to and abutting upon the house which had already been bought and was being used as the priest’s residence, the school would be built first. It was designed “in an inexpensive style, but with Gothic feeling; the interior being finished by open timbered roofs, and with stained and varnished woodwork”. (NG).

By October of 1862 a ‘neat and commodious school’ had been erected, thus exhausting all Father McKenna’s slender resources.
It was opened as a “temporary church to meet the wants of the congregation until such time as the truly zealous and indefatigable pastor would be able, through the piety of the faithful, to raise sufficient funds to erect a church suitable to the due performance of the ceremonies of our holy religion and the flock committed to his care”. (Freeman’s Journal).
To add special interest to the opening occasion a choir of 12 singers had been imported from Nottingham Cathedral, one of whose members played the fine harmonium placed at the bottom of the room. The instrument was supplied by Henry Charles Rientjes, pianoforte maker of Carlton Street, Nottingham.
“Its tone and external appearance fully warrant it as a first-class instrument; as a proof of which it may be mentioned that one of similar manufacture, and from the same firm, gained a medal at the International Exhibition. Those present never heard a harmonium of the same compass of stops so well adapted as a substitute for the organ”. (NG)

In 1863 Father McKenna left Ilkeston when he was appointed Missionary Rector of Derby and the congregation was again without a resident priest, having to ‘import’ a clergyman — the Rev. Father O’Shea, from St. Bernard’s Abbey in Leicestershire — to conduct one Sunday service each week….. a scandelous state of affairs, at least for one visiting Catholic….

This was quickly followed the next week by a ‘correcting’ defence from a second Catholic.

(both letters appearing in the Ilkeston Pioneer August 1867) 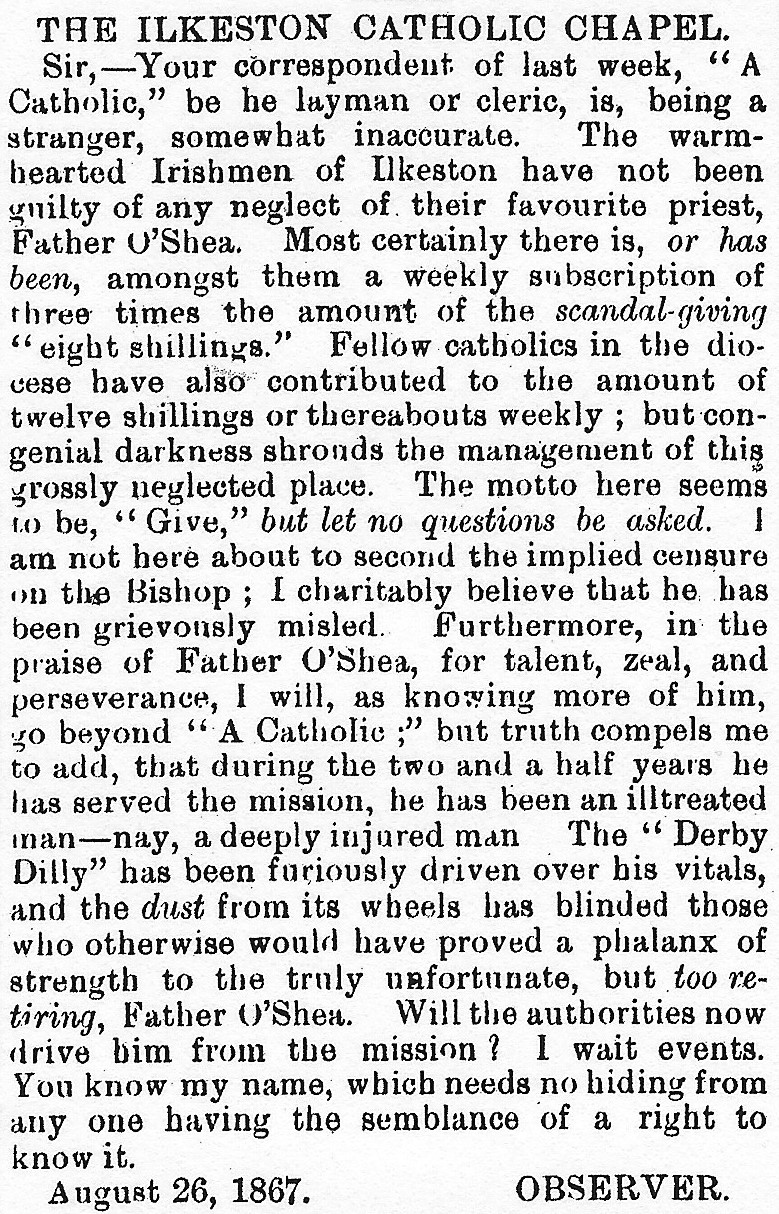 However it was not Father O’Shea who was to be the resident priest. Father Hugh O’Neill’s arrival in November 1867 — late of St. Barnabas’ Cathedral Church in Nottingham — was followed by a residence of 11 years during which time the Catholic premises were further much extended….an apsidal sanctuary added in 1875 and a separate schoolroom in 1876.

The building work was entrusted to William Warner and cost £500. The local press described the enlargement:
“The chapel has been brought out several yards at the east end, which now presents rather a curious appearance, being built in an apse form. A school-room has been erected in close proximity to the chapel, which will obviate the necessity of using the latter as a week-day school, as was formerly the case”.(IP June 1876)

And in October of that year the Rev. Cannon McKenna of Derby returned to Ilkeston to help celebrate the 20th anniversary of the founding of the Catholic Mission there. He preached the evening sermon.

In February 1879 the Catholic School in Regent Street appointed its first certified teacher.

In the summer of 1880 the chapel was spruced up – newly painted and decorated – and a reopening service was organised in July. Father Revill presided over morning Mass and the Right Rev. Edward Bagshawe, Bishop of St. Barnabas Cathedral in Nottingham, was booked to preach a later morning sermon. He travelled from the metropolis by the Midland Railway line but, without his ‘sat-nav’, failed to alight at Ilkeston Station and instead went on to Codnor Park. There he hired a conveyance and hot-footed it back to his intended destination, only to arrive as the disappointed congregation was trooping out of the chapel. His Lordship did promise to return the following Sunday.

Within the next ten years, Fathers Connaty (1885-1887) and McCarthy served at the church.

The foundation stone of the present church was laid in July 1921……. 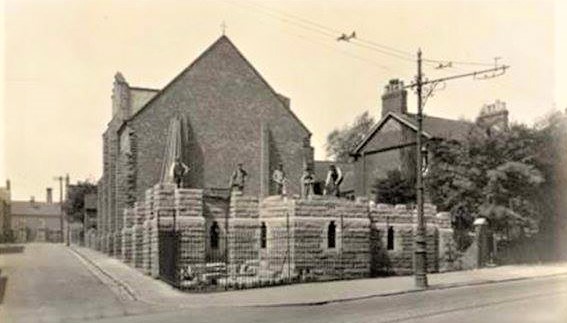 ……. and the building was completed and consecrated in May 1930. 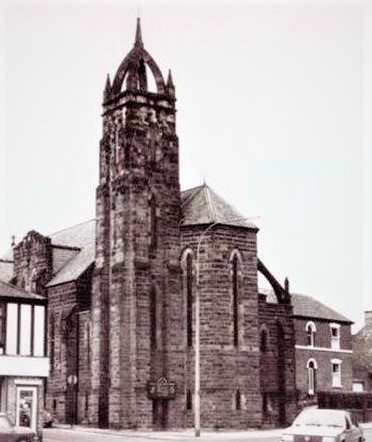 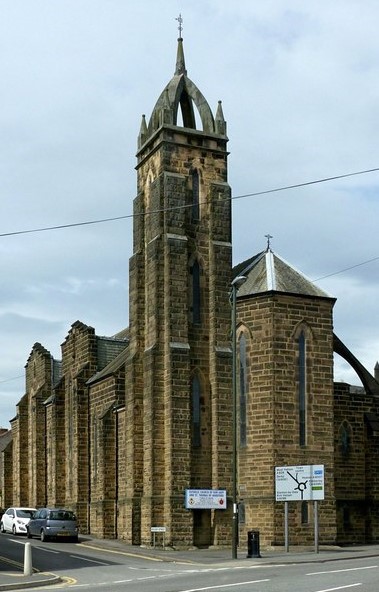 “In the end house lived Mr. Samuel Chester, his wife and family, Sam, Edward, Frank and Lizzie.
“Mr. Chester at that time was book-keeper at Carrier’s. He afterwards entered the United Free Church ministry.”

Son of needlemaker Samuel senior and Esther (nee Doughty), Samuel Chester junior was born in Sutton Bonington, married Hannah Guylee in Loughborough in 1848 and then moved to Ripley where son Thomas Guylee was born in 1850.

Still at Ripley in 1851, Samuel junior is recorded as a schoolmaster. At Christmas of 1855 he visited the South Street Wesleyan Reform Chapel where he gave a talk on the subject of Sunday Schools. He made a similar visit to the same place to discuss the same subject at the same time of the following year.

All born in Ripley, children Henry, Samuel and Eliza Doughty were then added to the family before, about 1860, the Chesters moved north to Broomhall on the outskirts of Sheffield. By now father Samuel was a United Methodist Free Church Minister at Hanover Chapel in the city where son Frank Edward was born in 1862. It seems unlikely that he was ever with the family in Ilkeston as suggested by Adeline. (above)

The time spent by the family in Ilkeston was possibly in the later 1850’s and the Derby Mercury does mention ‘Samuel Chester of Ilkeston’ preaching at the Wesleyan Chapel in Belper in July 1857.

And in November of the same year “Mr. S Chester, of Ilkeston, preached two sermons in the British Schoolroom… for the benefit of the Sunday School connected with the Wesleyan Reform Association”. (NG)

Samuel also made an appearance in the first edition of the Ilkeston Leader (May 2nd 1861) when he was a guest preacher at the Ebenezer Sunday School anniversary in Cotmanhay. In Hebrew the name Ebenezer means ‘Stone of help’ and the school there had ‘already proved to many what its name imports …. 230 children receive instruction here, besides a congregation attending twice on each Sabbath-day’. (IL)

We now return to Stanton Road and the Havelock Inn.