The eldest child of William and Maria Dawson was William Henry, born in Ilkeston on January 8th 1868.

In 1890, at the Primitive Methodist Chapel in Bath Street, he married Harriet Riley, daughter of miner Ephraim and Mary Ann (nee Smith) of Heanor Road. The couple then made their home in Mill Street before moving into Lower King Street. There, on the 1901 Census, Harriet is described as a ‘draper and milliner’.

Was this the source of this invoice? It appears that at the end of 1899 William Henry had supplied his younger brother John Arthur with an extensive collection of household fabrics, some furniture and various sundries … very shortly after John Arthur’s marriage and his move into his ‘new’ premises at John Street. (see next section) 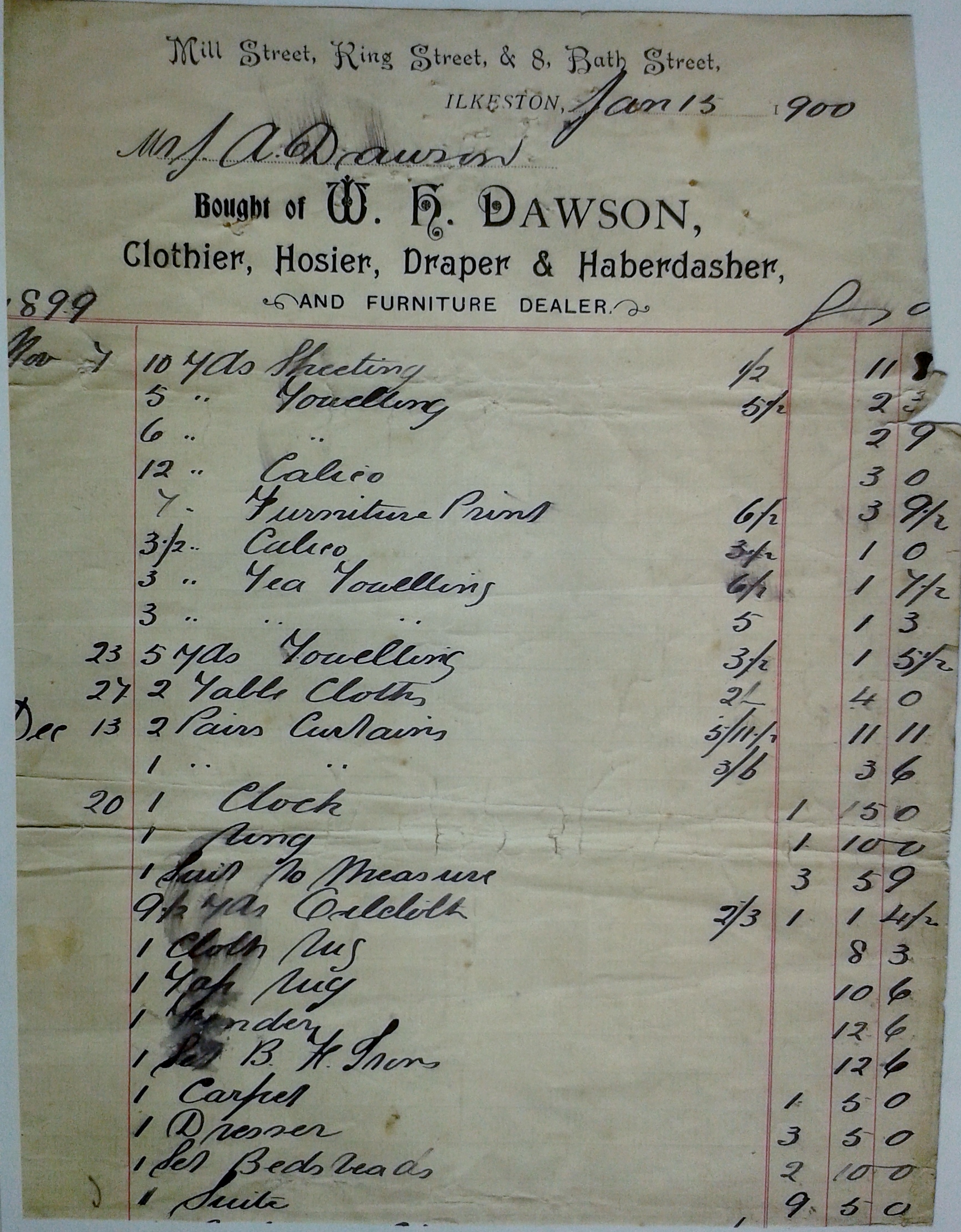 Into the next century and like his father, William Henry was trading as a timber merchant with premises in North Street .. and then .. !!

By far the most serious fire which has occurred within living memory at Ilkeston broke out on Sunday night. About half-past seven o'clock it was found that the timber yard of Mr. W. H. Dawson, which is situated near the Ilkeston town station of the Midland Railway and close to the northern end of North-street, was ablaze. In less than ten minutes the large building, containing a considerable quantity of valuable stock of dried and seasoned timber, was one mass of flame, which illuminated the neighbourhood and attracted thousands of people to the spot. The roof, which was of corrugated iron, had fallen in within 20 minutes of the fire being discovered. Fortunately the wind, which was not strong, blew from the south, and the flames were prevented at the outset from spreading to the piles of wood lying between the blazing shed and the entrance to the yard. The south end of the yard adjoined a number of cottages, and on the east side were other cottages, separated only by a very narrow roadway, and these must inevitably have caught fire had the wind come from the opposite direction. Mr. Dawson had some horses on the premises, and these were rescued early, the Midland Railway Company's servants also removing several valuable animals, which were in the stables adjoining the woodyard on the west side. On the east were the livery stables of Mr. Isaac Whitehead, but the horses were quietly taken out of danger when it was thought probable that the flames might spread in that direction. The Ilkeston Fire Brigade did not reach the scene until half an hour after the outbreak, and their efforts were at first directed towards preventing the fire spreading towards other portions of the timber yard. With only a manual engine very little impression was made upon the blazing mass, and at one time fears were entertained as to the ability of the brigade to control the fire. The flames crossed the roadway leading to the footbridge over the Midland Railway, and the sleeper fence enclosing Mr. Whitehead's premises was well alight, so that it became necessary to concentrate every effort on that particular spot in order to prevent the fire extending to Mr. Whitehead's stables and hay stores. With a good supply of water from the public main, the brigade checked the fire in the direction named, and then turned their attention to the north-east portion of the timber yard. After playing upon the flames for nearly two hours the outbreak was got under control and the danger of other portions of the timber yard becoming alight was past. At half-past ten o'clock the firemen were still playing upon the smouldering wreck, which appeared likely to require vigilant attention for some time to come. How the fire originated is not known, but it is believed to have been either caused designedly or, if accidentally, by a lighted match being carelessly thrown over the fence separating the timber yard from the roadway. The damage is understood to be covered by insurance.

The account from the Sheffield Independent, January 28th 1902, added some interesting additional detail ... Help was speedily forthcoming after the alarm was raised ... and by dint of private exertions, chiefly with buckets of water, the (wooden) sheds were preserved from attack. Meantime a lot of willing hands had begun to drag away large piles of timber in the hope of stopping the progress of the flames, with the result that much timber was trampled on and damaged by the thousands of persons who visited the scene which would have been unharmed had it been left in its original position. The members of the fire brigade had to be fetched from church and chapel and all over the town, the captain being organist at St. John's Church, and the engineer being at the Wesleyan Church. It would be an hour after the alarm was given before two jets were got to serious work from hydrants in Stamford street and Brussell's terrace, bot a considerable distance away, the spot being an awkward one to get at with water. (Also destroyed in the fire was) a stretch of hoarding belonging to Rockley's Billposting Company which stood on the northern boundary of the woodyard, close to the shed in which the outbreak arose. With the wood shed was destroyed the joiner's shop, along with the tools and also a dray. On the far portion of the land where were the stables is the Anglo-American Oil Company's depot, where a considerable quantity of petroleum was stored, and at first some alarm was felt lest the fire should extend in this direction, but fortunately it did not do so.

“My aunt (Gladys May Dawson) .. told me that William Henry built the houses on Drummond Road”.
These would include Number 19, William Henry’s home in later life and where he died in 1949.