Having just examined some Victorian housing development on the south side of Station Road, let’s wander over to the north side and get a glimpse of what was happening there in the late Victorian era. Again thanks to Jim Beardsley’s collection of documents

Walking down this road in 1881, away from Bath Street and in the direction of the Erewash Canal, you might have noticed that, past what is now Wood Street, there were almost no houses on the north side, and none in the fields behind Station Road …. as the map below shows. 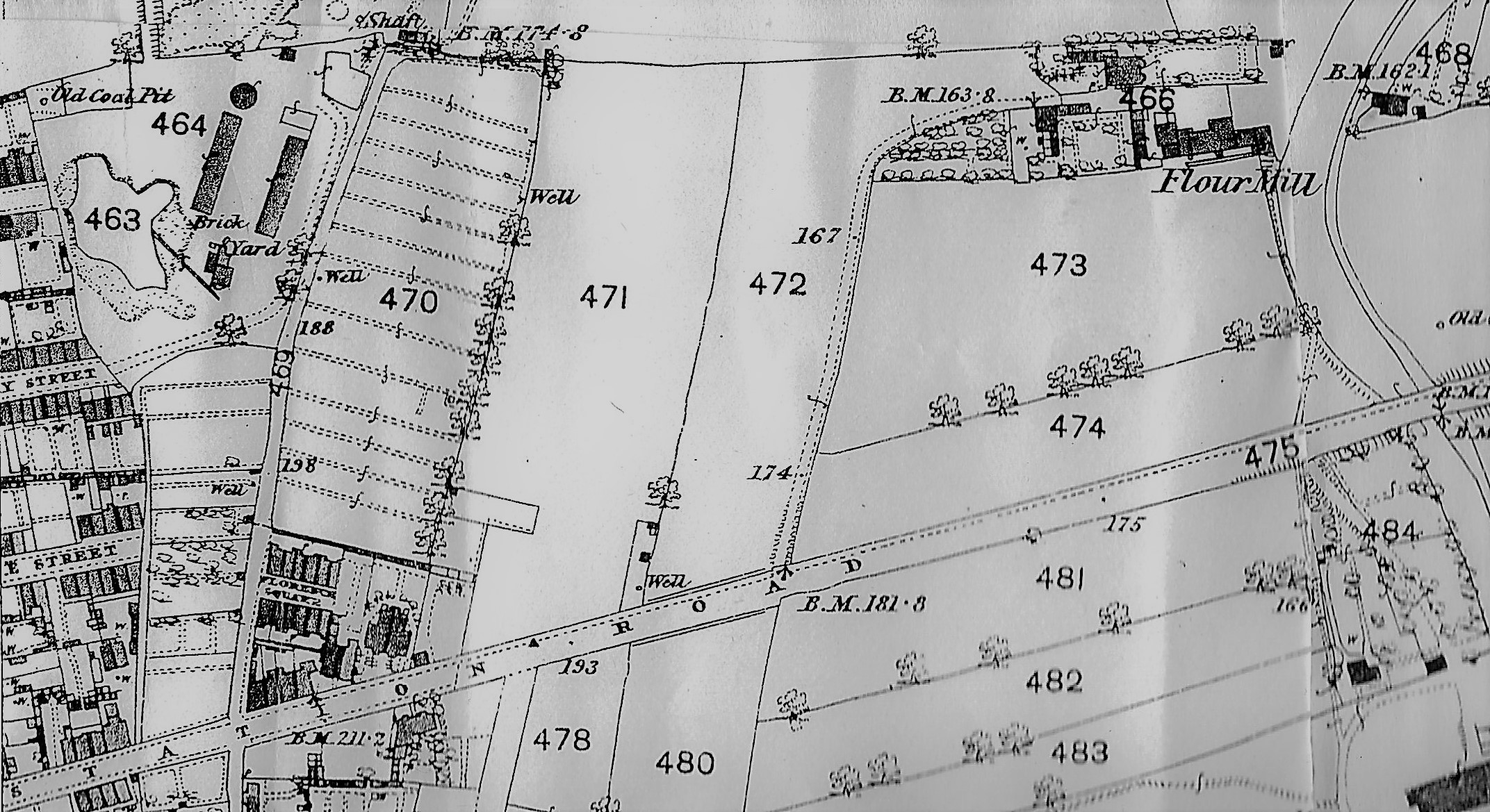 Present-day Wood Street was undeveloped in 1881 though the line of its future route can be clearly seen on the left (west) side of the map, with the number 469 written along it. The canal is on the extreme right of the map.

In March 1882 some of the land and property in the above map was owned by Charles Hiram Gregory, then a licensed victualler, who had taken out a mortgage for it with Henry Abel Smith, a Nottingham banker. The property included the ‘steam corn mill‘ (flour mill), three buildings nearby, with gardens, stables and other outbuildings, and all the meadow land south of the mill and up to Station Road, a total area of just over two acres. In addition there were also several plots of building land on the western side of the meadow land.  (You can see the mill and buildings on the map, and they can be identified on the 1881 census as Mill House, occupied by Maurice Deacon, and Rutland Wharf.)

At the end of that year Charles Hiram had not paid off the loan nor the interest on it. So, at his request, in stepped William Hewitt, a prosperous lace manufacturer living at Granby House in Granby Street; the latter purchased the mortgage from Henry Abel Smith and thus became the beneficial owner of the property.

Just over four years later — in February 1887 — much of this ‘irregularly shaped parcel of land’ was sold once more. At this time it was described as bordering upon the Erewash Canal in certain parts, and also upon Station Road. Within the land several new streets had already been laid out — these were Mill Street, Canal Street, Blake Street, John Street and King Street. The land was passed, eventually, via Laban Bexon, a grocer and baker born and living in Basford to Henry Knighton, a farmer, contractor and builder who lived at Rutland Farm on Heanor Road and his ‘partner’ George Duncan Wright, a grocer and yeast merchant of Granby Street.

Several other mortgage arrangements were subsequently negotiated up to May 1890, by which time the land had been divided into allotments numbered 1 to 53, and was still owned by Messrs. Knighton and Wright. 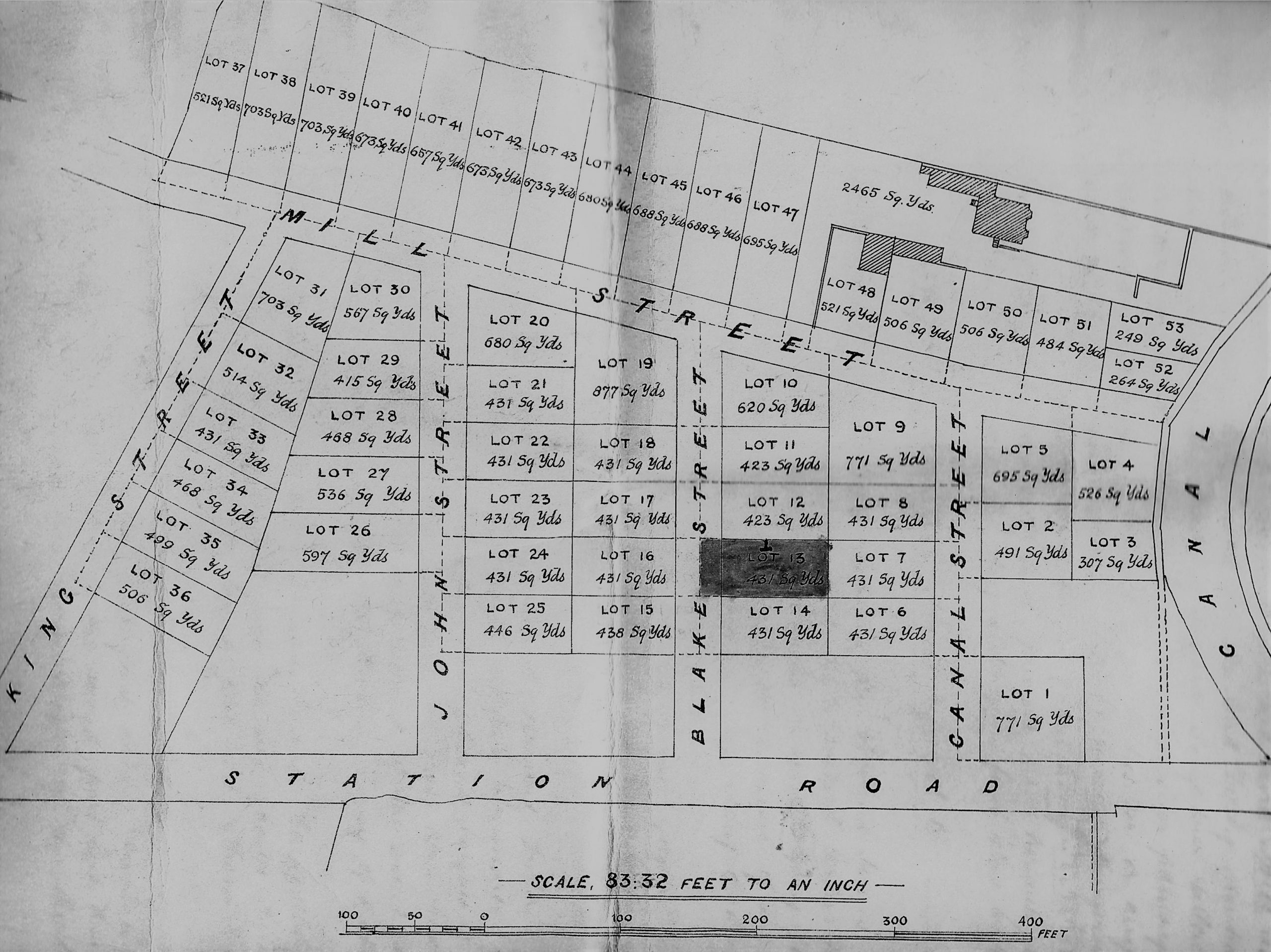 In the midst of all this new building, at the corner of Blake Street with Station Road (at number 78), was the grocer’s shop of Sarah Haynes. In August she applied for an off-beer licence, her shop having no nearby competition. The nearest licensed shop was about 275 yards away, and  a little further along, towards Bath Street, was the Erewash Hotel, about 380 yards away. With these exceptions, there was no other property for the sale of beer in either Station Road or in any of the new streets now leading off, south of North Street. This was an area of about 2000 inhabitants, 109 of whom had signed a petition in favour of Sarah’s application. The magistrate was not swayed however — to him, Sarah’s premises were on the outskirts of this population and not in the midst of it.

Now, if we focus on Plot 13 in Blake Street, we find that the man intimately involved in its development was Moses Fullwood, a fish and game dealer, and joiner at 99 Bath Street. It was the latter who bought Plot 13 for £97 2s 6d, in April 1895, from Henry and George, with Laban playing his part as mortgagee. The plot was bounded on the north by land of Frederick Shaw (plot 12), on the east by land of William Shaw (plot 7), and on the south by land of Frederick Henshaw (plot 14). In the sale agreement, Moses was instructed to build a wall or fence on the north border of the plot, and he could not trade as a ‘horse slaughterer, tallow chandler, melter of tallow, soap maker, soap boiler, fellmonger, brickmaker, manure merchant, dyer or distiller’ or engage in any other trade which might cause olfactory offence to the neighbourhood.

On acquiring Plot 13, Moses immediately began to erect three houses, later numbered 27, 28 and 29. About the same time — on May 24th 1895 — he arranged a mortgage of £400 for the plot, with Thomas Dodson Fritchley of Station Road. Just over a year later — on June 29th 1896 — with the mortgage still outstanding but with the building of the three houses now complete, Moses sold them to his wife Louisa (nee Kelly) for £50. She thus took over responsibility for the loan.

On September 7th  1897, Louisa sold the mortgaged houses to brickmaker Walter Beighton for £530, the mortgage still held by Thomas Dodson Fritchley. Out of the purchase price, Thomas was paid back his original loan of £400.

On the 1901 Ilkeston census we can find Walter living in number 27 Blake Street, with his wife Elizabeth (nee Marshall) and thier two young daughters, Ada and Hilda.

Some time between 1901 and 1911 Walter Beighton and his family moved out of Number 27, Blake Street, to live at 6 Kingsway, and he was still there in 1919 … but still owning his property in Blake Street. On May 29th of that year he took out a mortgage for £350 with Mrs Angelina Hockley for the Blake Street plot and its three houses. Angelina was the daughter of Ilkeston miner Thomas Chapman and Elizabeth (nee Stevenson) and had married coalminer Henry Hockley on May 29th 1887. In 1919 she was living at the Black Boy Hotel in Mansfield where her husband had now forsaken coal mining and was the proprietor of the inn; he had previously been landlord at the Gladstone Inn and the Poplar Inn, both in Ilkeston, and in the following year he retired from the trade, to live in Lenton. 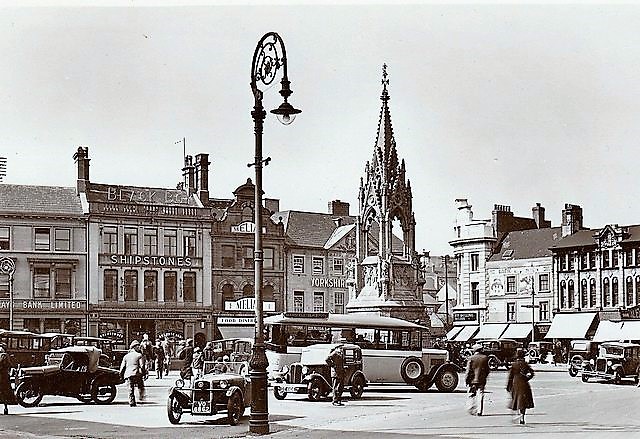 On July 26th 1920 the premises were sold to Ilkeston bricklayer William Ellis of 131 Cotmanhay Road, Ilkeston for £375 — £350 of which sum was transferred to the mortgagee Angelina Hockley; the remaining £25 went into Walter’s pocket.

Having left Cotmanhay Road to live in ‘The Nest’ at 215 Derby Road, William Ellis died on May 19th 1941 — his son William junior had moved into his old house. In his will William senior left his property to his son and two spinster daughters, Alice and Eliza, both of whom lived with him at the time of his death…. and it was Alice who inherited the three houses in Blake Street.

On May 2nd 1966 Alice sold number 28 to John Barry Pearson and his wife June. A couple of months later — on July 4th 1966 — she sold number 27 to Ivan and Joan Willis. This left only number 29 in her possession when she died on March 27th 1980, still living at The Nest in Derby Road. In her will she bequeathed this house, in equal parts, to Mrs Elsie Davis, Mrs Gladys Haffner and Miss Clara Irene Smith — a property which they sold on July 29th 1982.

One interesting house in this area, adjoining the Erewash Canal on the north side of Station Road, was built by Reuben Shaw, who, in September 1883 applied for a full spirit license for these ‘new premises’. At the time this was a rapidly expanding area, 74 houses having been built in the last few years — several of them by Reuben. And before building this property, Reuben already owned 19 houses, kept small boats, and had the town’s only swimming baths. He rented 4½ acres of land close by, which he planned to level and use for football and cricket (“Ilkeston’s present cricket ground was far from good” !) Obviously Reuben was a man of ‘considerable property‘ but that didn’t count with the magistates who refused Reuben’s application — on the grounds that there was no necessity for it.

Reuben died on October 10th 1886, described as a marine store dealer, and his wife, Sarah Ann (nee Calladine) continued to live at the house. And three years later, on the anniversary of his death, the property was put up for sale by auction. It was a freehold property, described as the Club and Coffee Restaurant, with 17 rooms: — a large bath room, kitchen, two living rooms, scullery and coal closet (all on the ground floor or cellar); an entrance with glass-covered porch, a large club/dining room, a sitting room and committee room (on the first floor); a large billiard or reading room, lavatory and two bedrooms (on the second floor); five bedrooms (on the third floor). Outside was a large shed with a boiler and small engine, stabling for six horses, a coach-house, hay loft, a w.c., and a machine shop. There was good wharfage and landing stages, running by the side of the canal. Obviously one of its attractions was its adaptability for use in several trades — and all just a few minutes walk of the Midland Railway Station !! In total it covered just over a third of an acre.

In a separate lot but in the same auction were the four houses built in Canal Street off Station Road, which adjoined the Restaurant. Can you identify them in the map below ? 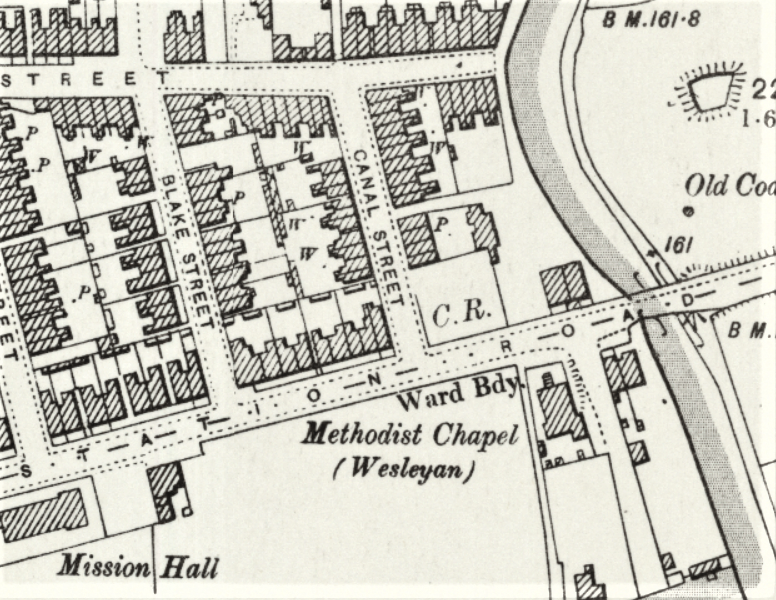 Now we are well beyond North Street