Using a batch of documents kindly offered from the personal archive of Jim Beardsley, let’s have a look at how some new housing was developed in Station Road, when and by whom. Like so many property deals at this time, conducted wihout estate agents, you will see that land changed hands regularly, and it is often difficult to keep up with its ownership. Many loans were involved, of small and large amounts, a few houses were erected and at least one street was constructed during this time.

Robert Skeavington was a prosperous Cotmanhay farmer who died on November 13th 1849. In his will, he left a number of monetary bequests to his illegitimate and legitimate daughters, all born to Mary Knighton — whom he had married in September 1825, and to whom he left all his real estate, so long as she lived, or did not remarry. Mary did not remarry, and died on May 24th 1861, at which point the estate passed to the illegitimate and only son of Mary and Robert, named Robert Knighton or Robert Knighton Skeavington (born in 1822).

On April 18th 1865, Robert Knighton Skeavington paid a fee of £412 at Ilkeston’s Manorial Court to enfranchise part of his inherited estate. It was called Barn Close or Pithills, and occupied about 4¼ acres.

On the day of enfranchisement, Robert also mortgaged this property for £1800 with Alice Emery, a widow living in Derby … she was born Alice George in Arnold, Nottinghamshire, in 1798, her paternal grandmother being an Ilkeston Skeavington, and probably a relative of Robert (although I haven’t yet quite worked out the reationship)

Alice died on November 17th 1874 and in July of the following year Robert paid £2100 17s 3d to the executors of her will, being the principal plus interest still outstanding on the mortgage. The property was thus fully back in his hands.

This was not the end of Robert’s financial business however. At the Ilkeston Court Baron on April 18th 1876, he surrendered some of his inherited copyhold property to Matthew Hall of Granby, Nottinghamshire, for £1500, borrowing a further £150 from the same source a little while later. And by October 1879 all that money was still owed. At this time, to act as security, Robert’s Barn Close was made over to Matthew Hall. Because of the sale of some parts of it, the size of the Close had by that time  been reduced by almost an acre.

By April 1881 Robert had been unable to pay his debts and so filed for bankruptcy … and a month later the Bankruptcy Court’s liquidator began selling off Robert’s assets which of course included his real estate.

Robert Knighton Skeavington’s land subsequently passed through a series of convoluted financial agreements and various pairs of hands until Charles Hiram Gregory acquired part of it on December 14th 1881.

At this time a diagram of the area acquired by Charles Hiram was drawn on tracing paper (on the left).

Part of the area was coloured yellow and was described as on the south side of Station Road and abutting that road, and being on the east side of a plot of land marked Lot 8 on the plan.

It was approximately 376 square yards in area

I hope you can make out these features.

You will also see that there is a ‘proposed new street 30 feet wide‘ which is shown crossing Station Road … have you any idea where we are now ?? 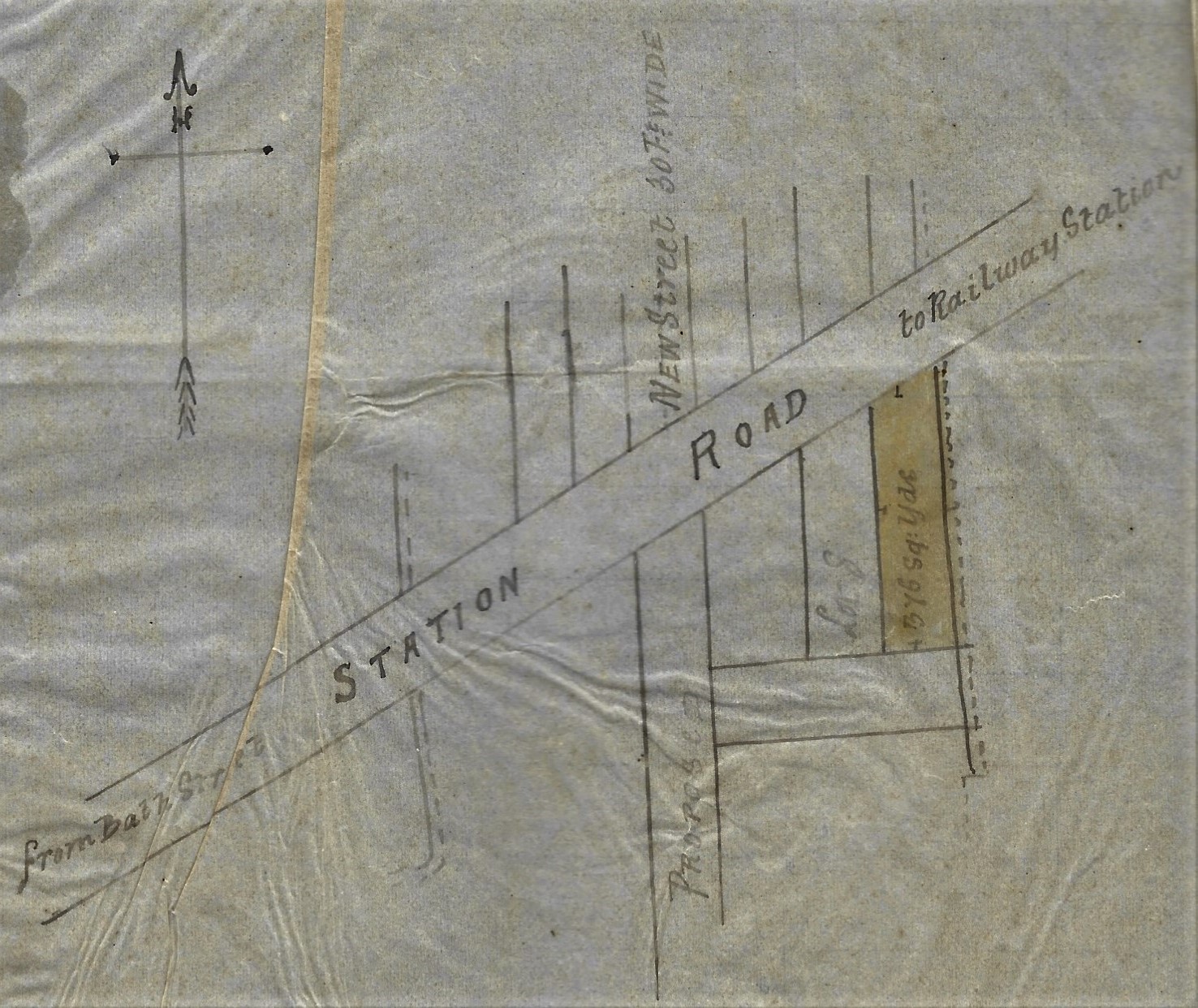 Sketch within a property document related to Charles Hiram Gregory 1882

On March 17th 1882, for £3600 and interest, Charles Hiram Gregory mortgaged most of this land to Henry Abel Smith, a banker of Nottingham, who, on November 8th of the same year, conveyed the yellow-shaded portion over to Frederick Henshaw for £56 8s. This portion was still about 376 square yards and shown on the plan below, with its boundary ‘neighbours’. 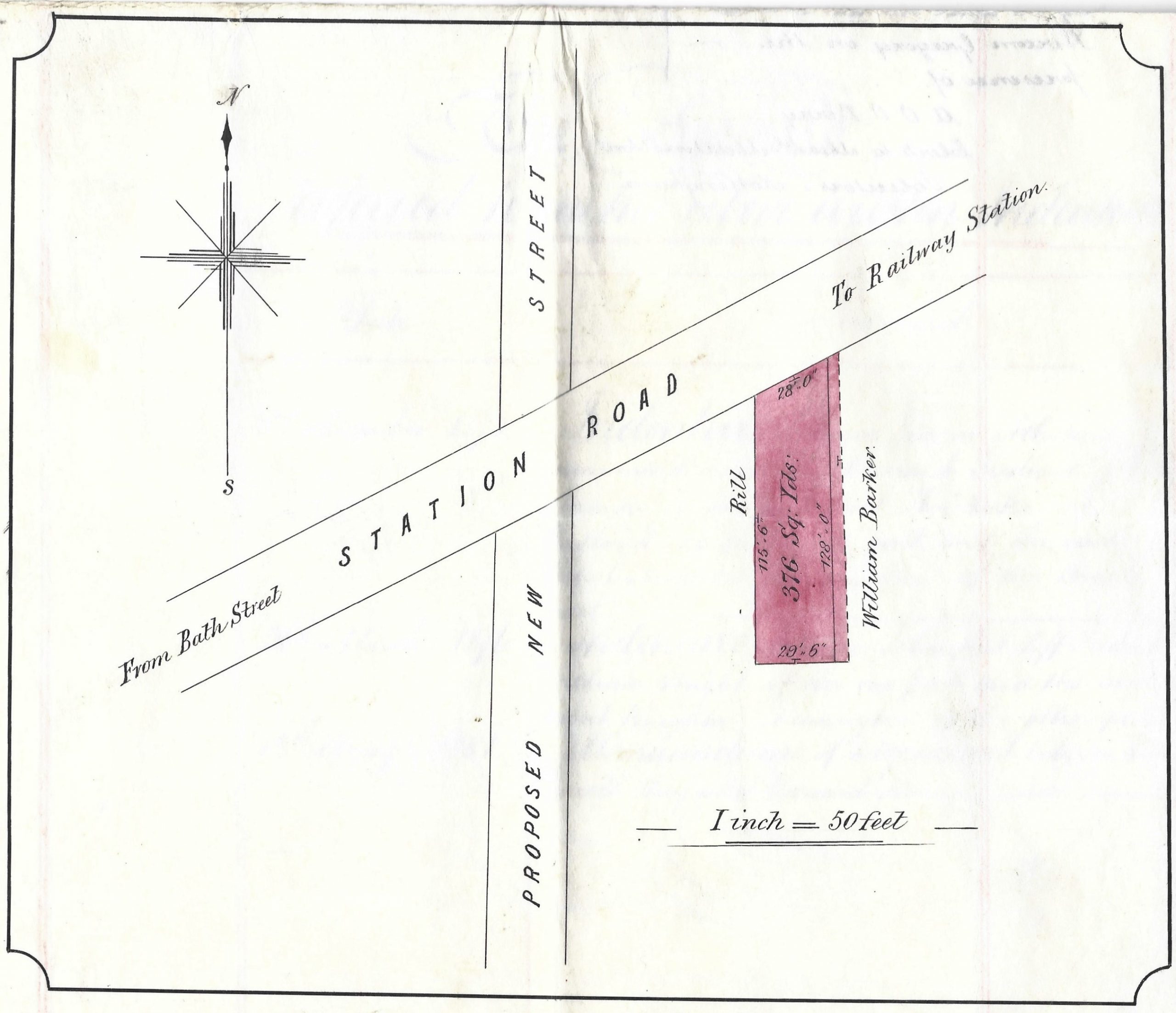 On acquiring the land Frederick immediately started building two houses there, and four weeks later arranged a mortgage of £220 for the two premises with the Rutland Lodge Friendly Society, (based at the King’s Head), through the Society’s two trustees, William Ball and John Mellor. After this, Frederick paid the interest on time, though the principal remained outstanding.

The two houses were later numbered as 105 and 106 Station Road.

Frederick Henshaw acquired further land in this area, built a further three houses here, and on August 24th 1886, took out another mortgage with the same Friendly Society, this time for £80. (Note that trustee William Ball had died on February 2nd of that year and his post as trustee was taken by John Moss)

The proposed new road, shown in the plan above, had now been constructed, 30 feet wide, and was called — or was to be called — King Street. And it now formed the eastern boundary of Frederick’s new parcel of land, which measured 295 square yards. The remaining boundaries were occupied by land belonging to John Hallam, Enoch Waters and Thomas Smith.

On September 14th 1893 a further £70 was raised by Frederick, from the same Friendly Society and on the same terms (John Mellor had died on November 30th 1892 and had thus been replaced as trustee by John Ball). And then a further sum of £25 was raised via solicitor Frederic Cattle on May 19th 1896.

On September 25th 1897 Frederick was able to pay off all the money owed by him, and this was signed off by the Trustees of Rutland Lodge Friendly Society — by then they were John Ball, Robert Wood and Charles Maltby.

Two days later Frederick sold his two houses in Station Road to Walter Bonsall, for £450. It was still 376 square yards in area but now with new neighbours — it was bounded on the south by the land of Isaac Fox, on the east by land formerly of William Barker but now of William Holbrook, on the west by the land of William Rice, and on the north by Station Road. In the two houses, with their yards, gardens, greenhouses and outbuildings, lived Frederick Henshaw and Joseph Rice, the latter having the ‘lock-up sale shop‘ of Mrs Ann Barnes at its front.

And then — on August 11th 1898 — for £300 plus interest, Walter Bonsall mortgaged the same Station Road property, together with his cottage at the rear of the New Inn in Bath Street which Walter had inherited recently from his father James. This cottage had a frontage to Wilmot Street. (You can see a detailed plan of this Wilmot Street property here) The mortgagee was Thomas Samuel Sisson of 5 Heanor Road, and a couple of months later, a further £100 was added to the original mortgage agreement.

On February 4th 1899 all his Station Road property and the cottage in Wilmot Street were conveyed by Walter Bonsall and his mortgagee Thomas Sisson, to Robert Widdowson, a grocer of 9 Lincoln Street in Old Basford. (Walter was now living at Highfield House in Marlpool). The price had now risen to £650. Of this, Thomas Samuel received back his loan of £400 and Walter got the remainder– £250. And of course Robert got the property.

Two days later Robert Widdowson mortgaged the Station Road and Wilmot Street properties to the same Thomas Samuel Sisson (!!) for £400. And just over a year later — on August 13th 1900 — Robert paid off the mortgage in full and thus the properties were reconveyed to him. 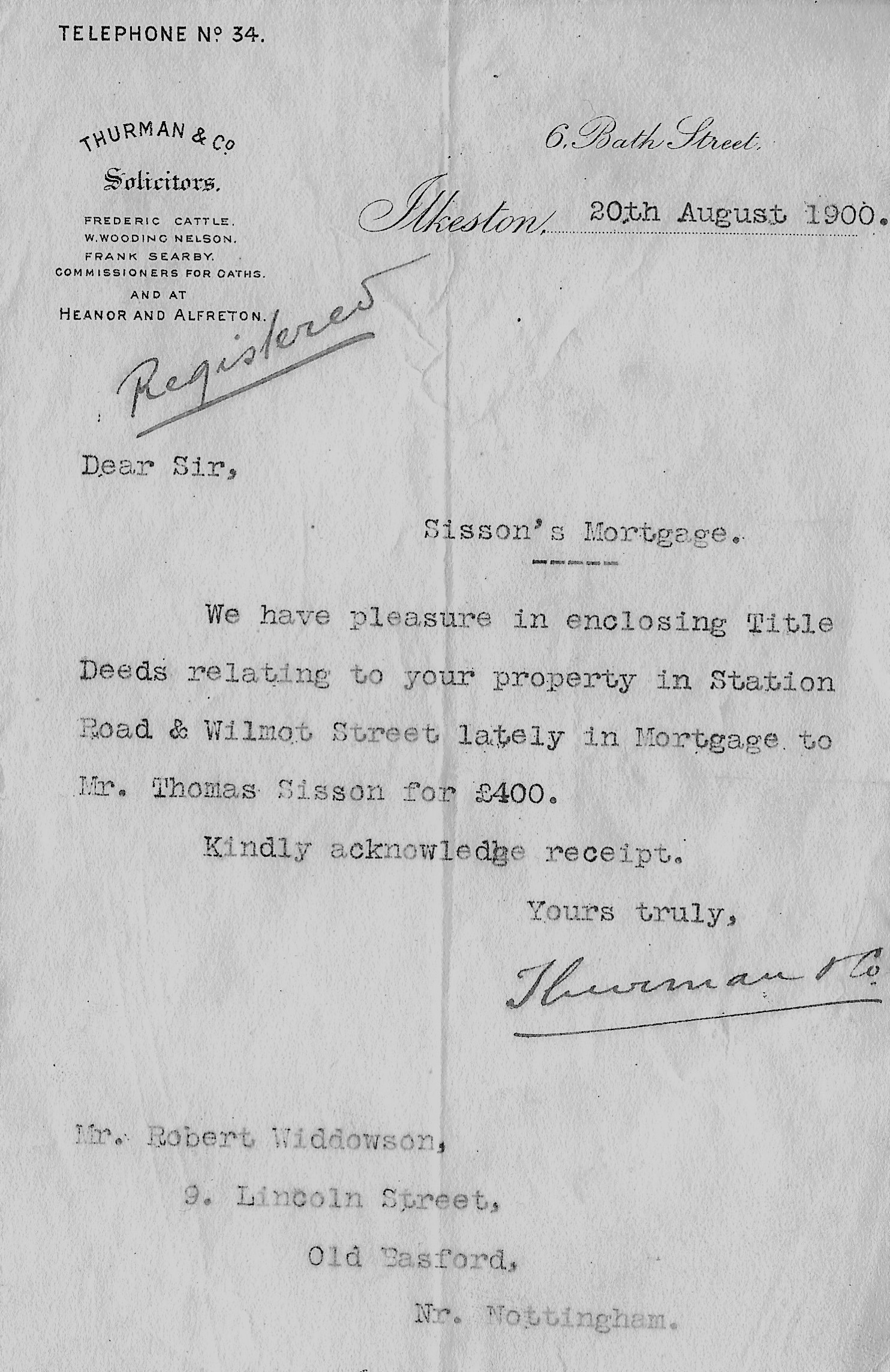 And Robert retained possession of the Station Road property for the next 30 years, at the end of which time he had left behind the grocery trade at 9 Lincoln Street in Old Basford and retired, (then working as a nurseryman), to Holbrook Lane in Belper.

On November 17th 1930 he sold the land, still of 376 square yards, together with the two houses, one still with a lockup shop to Arthur Cole, a tax collector living at 135 Hawton Crescent in Wollaton Park, Nottingham. The houses were at that time occupied by James Wright and F Thornton. The price was £350. 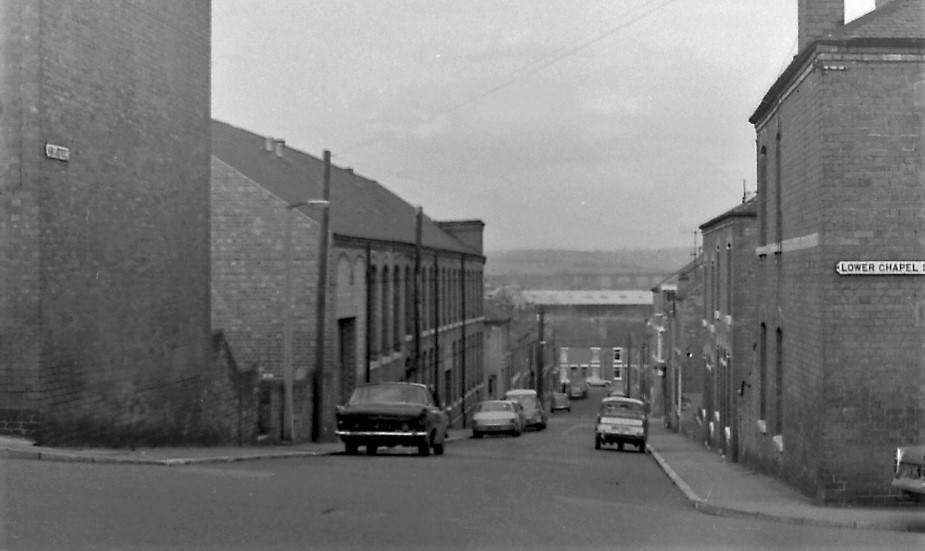 Frederick Henshaw, mentioned above, was born on June 15th 1853, the oldest son of John and Eliza (nee Straw). On April 17th 1876, he married Emily Aldred, daughter of James and Eliza (nee Thompson). They had two children, Henry (1881) and Eliza Ann (1884). Frederick and Emily both died at 24 Howard Street, Nottingham, in 1925 and 1935 respectively; they are buried together in Park Cemetery, Ilkeston.