The next shop was between South Street Chapel and the wide yard, now West Street.

Adeline recalls her as … “Mrs. Scattergood, a widow, and her two daughters carried on a fancy business.”

Widow Scattergood was born Mary Hardy about 1798 and had married framesmith Samuel Noon in October 1819.
The last of their four children, Mary Noon, was born after Samuel died in December 1827, aged 32.

“One daughter became the second wife of the late Mr. Alderman Moss.”

Mary’s elder daughter by her first marriage, Emma Noon, became the first wife of John Moss — then trading as a maltster in South Street — in September 1845. The couple had at least six children before Emma died in February 1859, aged 36.

Three months later widower John, now a pawnbroker and draper of South Street, married Emma’s half sister Mary Scattergood and this is the daughter recalled by Adeline.
A further nine Moss children followed.

“This shop was afterwards taken by Mr. William Wade, grocer; later on it was acquired by Mr. Philip Bacon, grocer, and I believe is still in the possession of his daughter.”

With his twin Joseph, William Wade was born in May 1830, the son of builder Benjamin and Mary (nee Haseldine).
In November 1858 he married Betsy Chapman, daughter of Lincolnshire farmer John and Elizabeth (nee Shaw).

Trueman and Marston list the many offices held by William … member of the Highway Board and then of its successor the Local Board, Chairman of the latter for four years, Guardian of the Poor, an Overseer, Parish Churchwarden, a Freemason, Returning Officer for the Town Council, Alderman and Deputy Mayor, and then, in 1888, the town’s second Mayor.

For most of his adult life grocer William traded in Bath Street although the 1870 Postal and Commercial Directory of J.G.Harrod & Co. lists him at Bath Street and South Street, as grocer and flour merchant.
He opened his branch shop in South Street at the end of 1866. 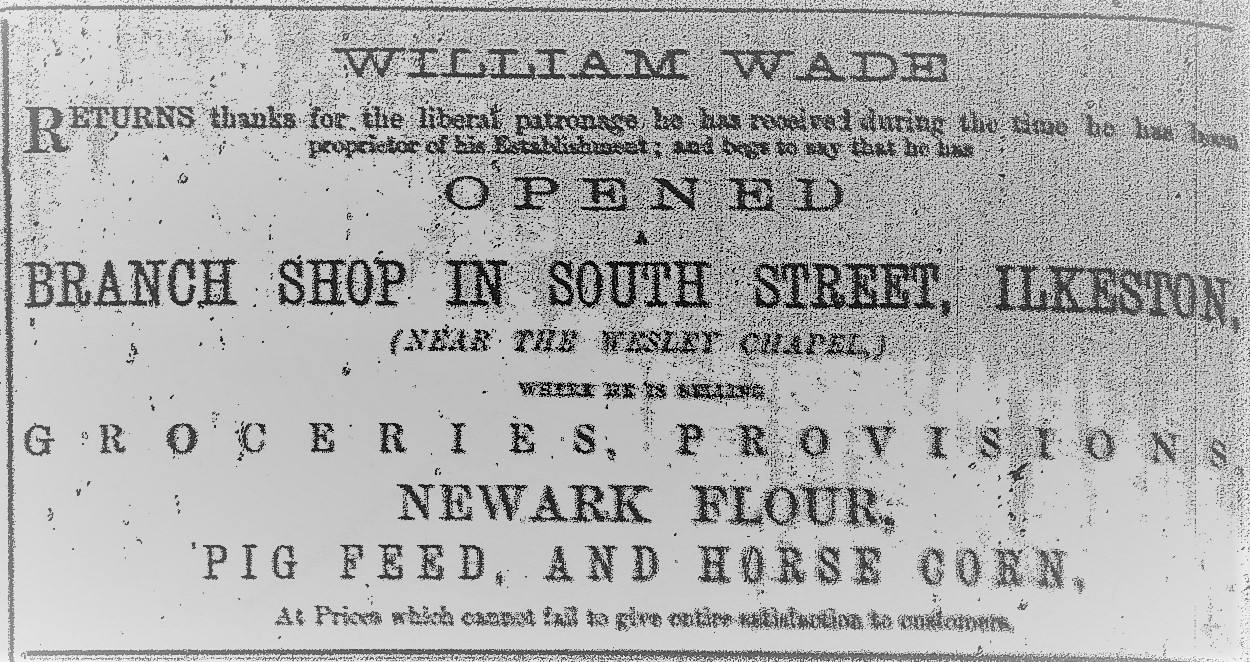 The 1871 census shows his name written in at 42 South Street but the enumerator has then crossed it out and written ‘Grocer’s shop. No-one sleeps in the shop’. William appears later in the same census at 83 Bath Street with wife Elizabeth alias Betsy and his apprentice Philip Bacon.

William Wade’s manager for several years, Philip Bacon took over the South Street grocery and provisions premises — still owned by William — in October 1880, shortly after his marriage to Mary Ann Hawley in February of that year.
She was the eldest surviving daughter of butcher Edwin Flint Hawley and Elizabeth Ann (nee Stanley).
In 1881 Philip was granted a licence to sell beer to be drunk on the premises. 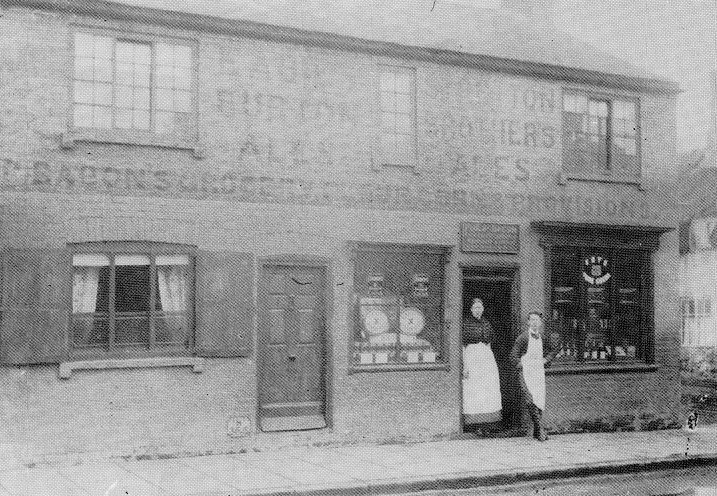 Bacon’s Grocers, Flour, Corn and Provisions .. and a drop of beer too. (taken after the shops and houses of South Street were renumbered in the mid-1880s and No.42 became No.54)

To the right of the shop (photo above) you can just see the entrance to West Street, formerly Wide Yard.

The Bacon family was there until the end of the century.
When Philip died in 1903 his widow ran the shop, assisted by their only child Annie, born in 1880.

Annie married South Street hairdresser Arthur Shooter in 1911. The latter had learned his trade with Market Place hairdresser Joseph Wright but now had his own shop at 52a South Street.

At one time, about the time of Adeline’s departure for Nottingham, the shop next to Bacon’s, was occupied by Richard Evans Brealey. He was born at Newhall, Derbyshire, in 1852, the son of potter John and Ann (nee Floyd), and his given names might have an explanation in the fact that his parents had close connections with the Ilkeston stone bottle manufacturer, Richard Evans of the Pottery. His mother was the older sister of Elizabeth Floyd who had married Richard Evans in 1835, and thus was their nephew.

Richard started his South Street trading in 1878, at what was then 41a South Street. He borrowed to invest into and expand the business, but then, in the mid-1880s he sold his property to his brother, whilest continuing as a grocer. Soon after this he ‘found himself’ insolvent and in October 1891 appeared before the Official Receiver at Derby Bankruptcy Court, claiming that his business failure was due to ‘bad trade’, some legal outgoings, and the expense of a large family on ten.

At the termination of business for Richard, his off-licence was temporarily transferred to Frank Smith, who traded as a provision dealer nearby, at number 48.

Next to Scattergood’s shop in South Street, was a double-fronted house, enclosed by a wall.
In this lived (old Harrison and then?) Mr. Baker.

Gap alert!  The inhabitants of this house have so far proved elusive. (More Harrisons?)

And so we walk on to …..  The Wesleyan Methodist Chapel.