If you walk along South Street, from Queen Street towards White Lion Square, on your right-hand (west) side you will pass West Street — it is almost opposite Gladstone Street.
What you will not pass, or find, is Wide Yard.

However, some sources suggest that there was a ‘Wide Yard’ distinct from West Street, somewhere along South Street.
For example, the Ilkeston and District Local History Society website describes Wide Yard as an “extinct area off west side of South Street. Roughly opposite Weaver Row“, thus placing it close to the present-day sites of the Treetops Hospice and Post Office outlets.
And further in the same website is a photo taken from South Street of buildings, labelled “The cottages in the Wide Yard pictured shortly before their demolition circa 1972. The raised brickwork at both gable ends point to the fact that this roof was once thatched“.
The same photo (below) appears in the Society’s publication, ‘Top of Town‘, again seeming to confirm Wide Yard as about 50 yards or so, south, past Queen Street. And certainly apart and separate from present-day West Street. 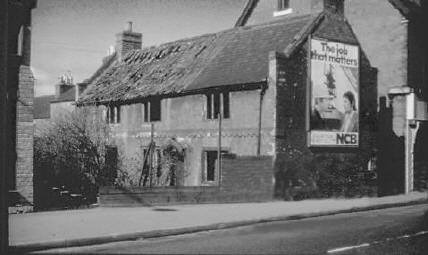 This is taken from Ilson Bygones Facebook page, posted by Janette Allen (2015)

The memories of Adeline Wells

A few of the letters written by Adeline Wells to the Ilkeston Advertiser in the 1930s describe this part of South Street — which we have just explored.
She recalls that, at the southern corner of the junction of Queen Street with South Street, there was for many years a potato patch until George Haslam built a house upon it (this was Euclid House, built around 1884 — which at present houses South Perk Sandwich Bar and an outlet for Keith Hall Beauty Room). 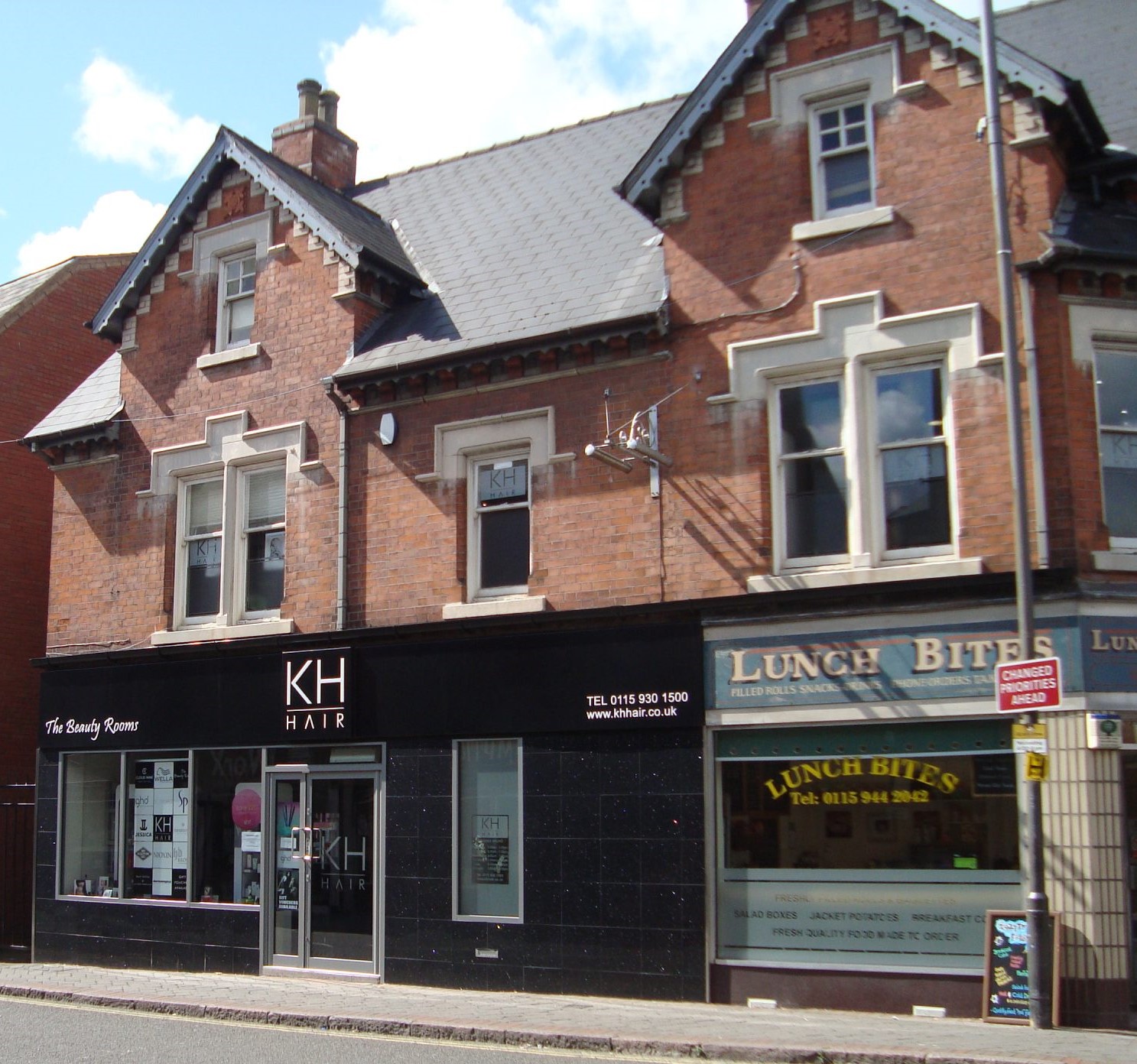 Next door, in South Street but facing southwards, was the Old White House, built by Francis Sudbury senior — here lived the Sudburys until they moved across the street, at which time the eldest Sudbury son, William, remained in the house, trading as a butcher. And when he moved out in the 1860’s, in moved shepherd George Flint and his family.
After this Old White House was the Nag’s Head Inn. (This survived until the early 1980’s at which time it was sold and became part of the Thorpes Furniture Store — some of the old facade can be seen in the upper storey of the northern section of the store.) 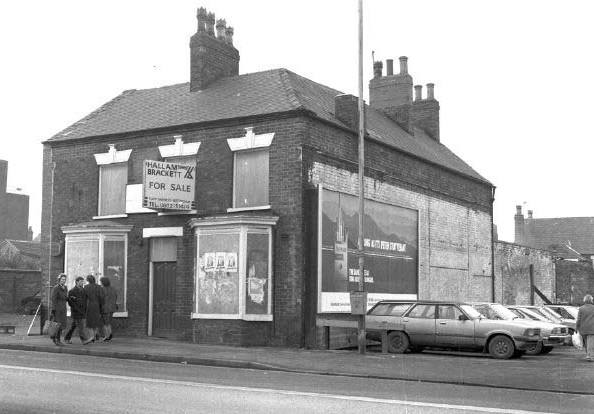 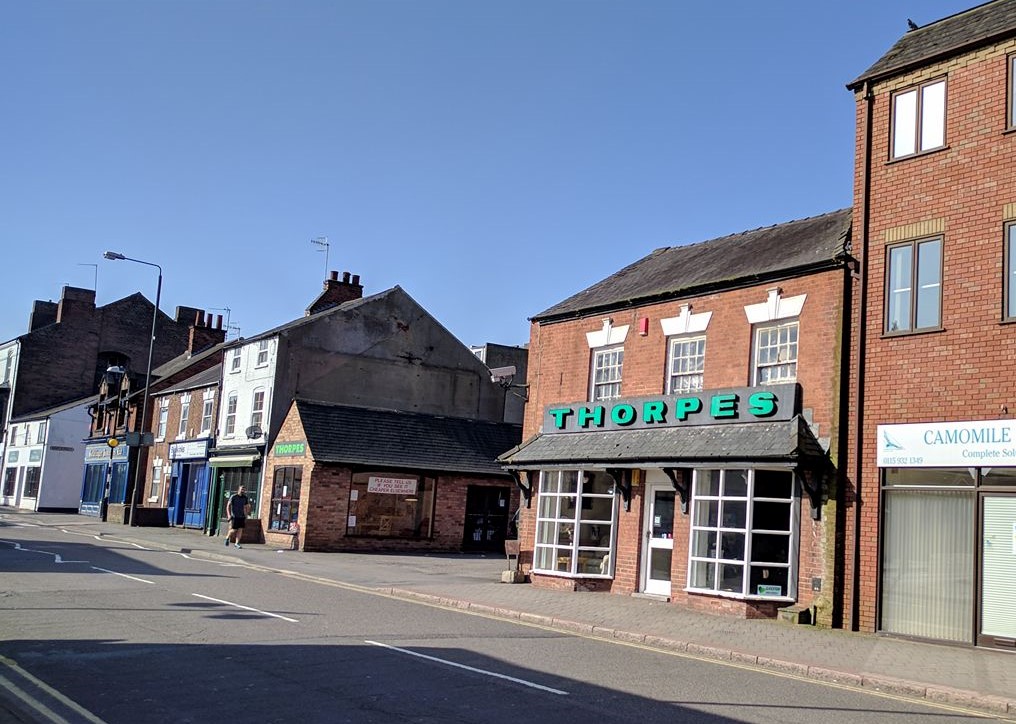 After the inn came a row of six cottages — at some time they housed a Clarke family, Harrisons, Smiths, Rowleys, Mrs. Gregory and possibly others. In great part this list matches the families listed in this part of South Street on the 1861 and 1871 censuses.
All of these have just been described, and so …

…. finally, at the northern corner of West Street with South Street was the home of the Platts family. …. that is, just before we reach the white premises, on the extreme left of the last photo above.

So where was Wide Yard ?

If we examine the 1841 and 1851 censuses for Ilkeston we can find no listing of Wide Yard or West Street. However within the Rate Book for the town, dated 1849, there is one explicit mention of Wide Yard, next to the residence of Thomas Watthew … this is the first reference to the yard that I have been able to find. There are a further ten premises listed in the Rate Book which may be situated in Wide Yard although the reference is ambiguous.

The baptisms records for St. Mary’s Church also have a couple of mentions for the Yard. The first one is for September 1852, recording the baptism of  Mary Burrows, daughter of framework knitter Isaac and Mary (nee Siddons). Now it would appear that this Burrows couple were living in Boot Lane (later known as Stanton Road) at that time, and continued to live there for the rest of their married life. However Mary Burrow’s father, John Siddons, and her brother Joseph, were living in South Street, just a few doors from Thomas Watthew. Was this at Wide Yard and could Mary have returned to the Siddons family home there, for the birth of her daughter ?
The second reference to Wide Yard in the baptism records is from July 5th 1854 and lists the baptisms and births of three children — Jethro, Mary and Hannah — to Thomas Wathey and his wife Eliza (nee Clifford). This reference also records that Thomas is ‘deceased‘ — he had died on June 16th 1854.

According to the 1849 Rate Book the property of Thomas Watthew/Wathey and other adjacent buildings were owned by Richard Fritchley, a Cossall farmer who died on April 9th 1859.

At the end of that year, under Richard’s will, these properties were put up for auction. They were listed as …
… premises, including a shop, fronting South Street, occupied by ‘Mrs. Fritchley … this may have been Richard’s widow, Hannah (nee Wheatley) although she was perhaps with the family farm in Cossall. Her daughter (?) Sarah Fritchley, is listed as a milliner in South Street at this time…. she was later to marry her cousin, Thomas Dodson Fritchley.
… eleven cottages contiguous to the shop (above), then occupied by Messrs. Clifford, Wardle, Flinders, Holmes, Hoggett, Wheatley, and others.
… the yard and large gardens belonging to this property.

The occupiers of these houses, listed above, are all to be found in ‘contiguous cottages’ on the 1861 census, as part of Wide Yard. There is no mention of West Street on this census. However the latter street does appear on the 1871 census, by which time Wide Yard has disappeared !! And, of the ten families listed on the 1861 census as living in Wide Yard, eight of them are living in West Street on the following census. Does this mean that the families of Wide Yard had emigrated en masse to West Street in those ten years ?? … including blacksmith William Hodgett who would have needed to relocate his smithy ?

Or are Wide Yard and West Street the same place but with different names ?
Certainly Adeline Wells thinks so….  In one of her letters to the Ilkeston Advertiser, she noted “the wide yard, now West Street“, and in another “The Wide Yard! Yes, we called it the Wide Yard in those days, for it was a yard pure and simple. …. There were gardens at the back, separated from England’s field – now Albert Street – by a thick hedge. It was a cul-de-sac. ….. The Wide Yard later became West Street“.

Adeline and her family were members of the South Street Wesleyan Reformers Methodist Chapel, lived in Queen Street Terrace and later Queen Street and would know this area well.

But why would Wide Yard want to become West Street ??   Maybe, to complete the ‘set’ ? — Ilkeston already had a North Street, South Street and East Street. (just joking !!)

Maybe the Yard was no longer a yard but more of a street ?
The map drawn up for the Local Board in 1866 by Charles Sherwood Newman does not name either Wide Yard or West Street but does show a large yard where West Street would be…. it is certainly a yard, with no rear outlet onto Albert Street. This is not surprising as Albert Street only extended southwards just past Queen Street !!
However by 1871 it had been extended, past the rear of what was then named as West Street, to Derby Road. And the yard was opened up so that there was now a way through it, from South Street to the newly formed Albert Street. Thus it could be called a street ?

And just like Clark Kent and Superman … you never see Wide Yard and West Street together.