I have included a map of the area, compiled c1880, and I have tried to relate Adeline’s description to the map. However this is my interpretation and you may well argue with it. The residents listed by her were not living in the street in 1880 of course. 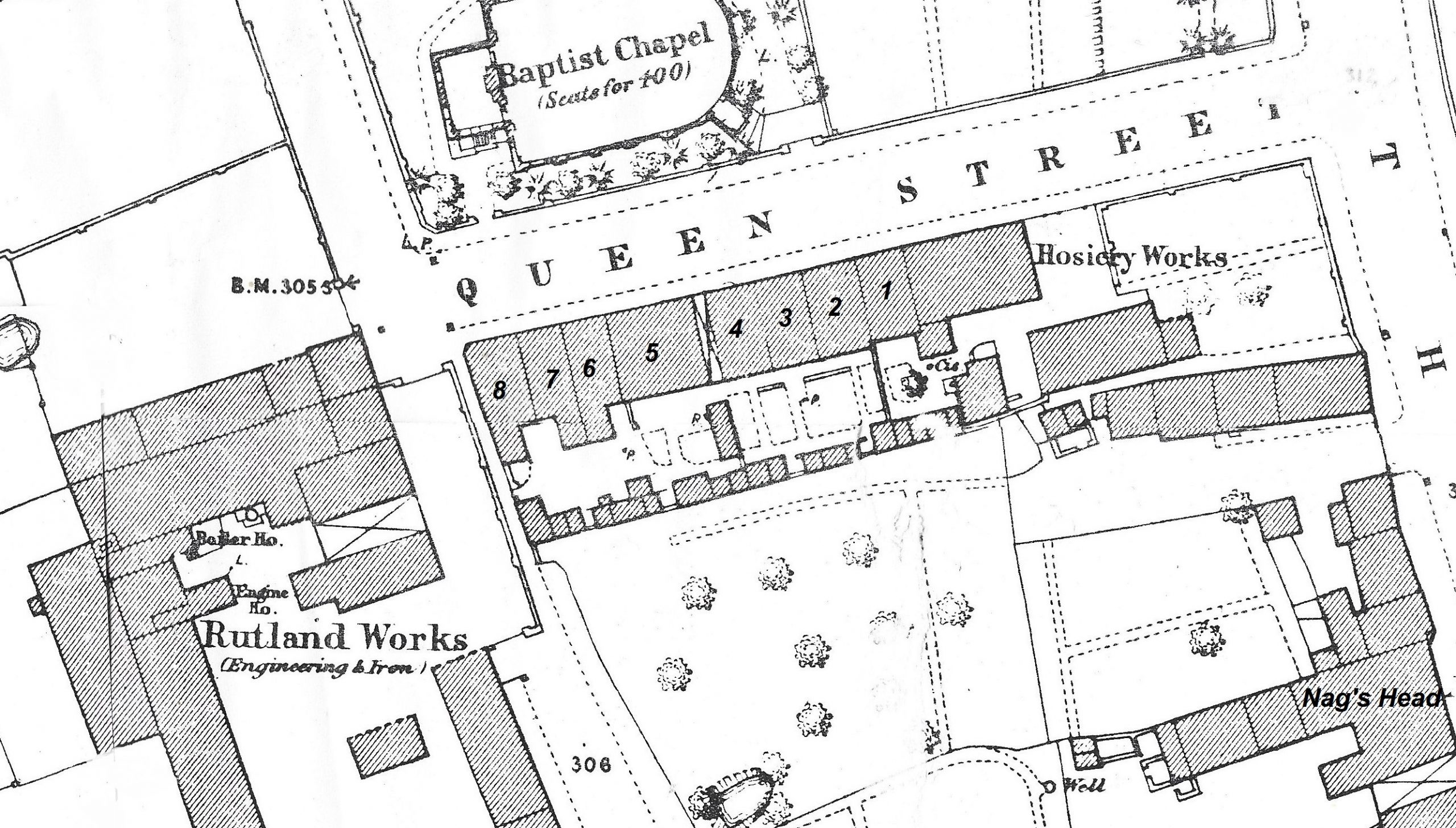 I believe that John Fish, Parish Clerk, lived at Number 1 on the map … and on the 1871 census it was also Number 1 of Queen Street.

Adeline remembers that a neighbour of John was “Mr. Frank Hallam, a pit contractor, who bought the lower part (of Queen Street)” — where the Council Car Park is sited, opposite to the Baptist Chapel.

“(He) built the six/seven houses below on his land.”

And at Number 2 ….. “lived Mrs. Walker, a widow, her daughter (*see below) and her son John, who was a printer at Mr. John Wombell’s ‘Pioneer’ Office and who established the printing business in South Street.”

This was in also No 2 Queen Street, the house nearest to South Street in this row.

Living in the Market Place area the couple had been married over 30 years and had had at least nine children.

Of these children Adeline refers to their youngest child John Flint Walker who was born in April 1839. 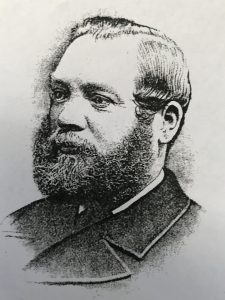 He continued to live with his mother when she moved into Queen Street in the 1850’s and after his marriage in May 1868 to Mary Blunston Severn, daughter of Little Hallam farmer Edward and Elizabeth (nee Blunston).

John worked at the Pioneer newspaper office initially as an apprentice and was there until 1873, when he started his own business as printer and stationer in South Street. His mother had died at Queen Street in the previous year.

At the start of the New Year in 1887 John and his wife provided a tea for 50 poor children at their South Street residence. There were many young smiling faces.

After the turn of the century John retired and moved back to live in Queen Street, at Blunston House.
Suffering from chronic rheumatism for over a decade, he died there in June 1911.

His widow Mary died 23 years after John, at the same house.

Mrs. Mary Walker, widow of Mr. John F. Walker, died at her residence, Blunstone (sic) House, Queen Street, Ilkeston, on Thursday of last week. She had attained a ripe age and would have been 95 next February. Throughout her long life she was prominently associated with St. Mary’s Parish Church and had been an active and valued worker. Up to the last few years she had been a familiar figure at the annual church bazaar in St. Mary’s Schools.
Mrs. Walker was a daughter of the late Mr. Edward Severn, farmer, Stanton-by-Dale, and was married in 1868. Her husband was well-known in the town, not only as a former churchwarden, but as a successful businessman in the printing and stationery trade in South Street. He died on 29th June, 1911. Two daughters of the union were the late Mrs. H. H. Cox and Mrs. Paton, wife of Dr. W. R. Paton.
The funeral was on Sunday afternoon, a preliminary service at St. Mary’s Church being well-attended. The Viacar of Ilkeston (Rev. Linsan Graves, M.A.), and the Curate (Rev. Harry Smith) officiated at this seervice, and the vicar officiated at the graveside in the Park Cemetery.
(There followed a lengthy list of mourners)
The coffin was of plain oak, and the plate was inscribed ‘Mary Walker. At Rest, October 11th, 1934, aged 94 years.’
Extracts from the words of the Vicar ..
‘Mrs. Walker was 90 when he came to the parish, and her days were not adys of sorrow. For the first two years after he came she was a regular attender at the church, although over 90, when one saw her at home or Working Party meetings, she took a keen interest in the work of the Church …
The greatest tribute they could pay to the memory of Mrs. Walker and her husband was that the work they were so keenly interested in should be carried on.’
(There then followed a list of the floral tributes)
Mr. C. F. Hazlewood, Albert Street, was the funeral director.

* The daughter mentioned by Adeline could be Georgiana who died in 1862 but is probably Eliza who married Horsley farmer James Foulkes in 1867. Both daughters lived with their mother at the Queen Street address for some time.

And at Number 3 we find …. “Mr. George Elsey, painter and decorator,

Gap alert!  Who was George Elsey?

(At another point in her letters Adeline refers to ‘Mr Thomas Potter, his three daughters, Ellen, Maria and Annie’. And in another article she refers to ‘Mr Potter sen., two daughters’).

Puzzle alert!  I am having difficulty finding an Ilkeston Potter family that fits Adeline’s conflicting descriptions and which had a connection with Queen Street.

In August 1866 the Ilkeston Pioneer reported the death of colliery labourer William Potter of Queen Street.
In the employ of the Butterley Colliery Company he was attending to wagons crossing the tramway at the bottom of Bath Street and at breakfast time decided to knock off for a bite to eat. To save a little time he jumped onto a moving wagon, part of a line of trucks, but slipped and fell across the rails. He broke his leg as a wheel passed over it and was shortly taken to the general hospital at Nottingham.
William died ten days later as a result of the compound comminuted fracture in the right leg. He was 73 years old.
William had married Sarah Rice in 1818 and had at least 12 children, including Sarah, Maria and Ann (but no Ellen).

It was reported that William was ‘a much respected townsman, a highly consistent member of the United Methodist Free Church, a Sunday School teacher and class leader, and a member of the church of Christ for about 19 years’ (IP)

If this is Adeline’s ‘Potter family’ then daughter Sarah married bricklayer and widower William Henry Brakes in 1861. (as Adeline suggests)
He had come to Ilkeston in the late 1850’s and here his first wife Sarah (nee Allcock) died in 1860, leaving him with four young children. After the second marriage at least three more children were added to the family.
William Henry and Sarah Brakes lived out their lives in the Oxford Street and then Market Street areas of the town.
Sarah died in Market Street in January 1900, aged 68, from chronic bronchitis, and William died there in November 1901, aged 73.

In 1866 Ann Potter, married Douglas Meakin, youngest child of framework knitter Joseph and Ann (nee Trueman).
In July 1874 Douglas was a deputy at the old Oakwell Colliery on Derby Road, renewing supporting timbers to the roof and adding new ones at the bottom of a coal shaft. The roof gave way and several tons of brickwork and coal fell onto Douglas, killing him instantly. His body was carried back to his home in North Street on a cart.
The pit was operated by the Ilkeston Colliery Company Ltd., one of whose owners was Henry Bostock. It was on the eve of being closed.
Douglas’s widow Ann was left with three very young children .. Joseph William, Mary and Ruth (who was to die shortly). She lived the rest of her life in North Street, eventually trading there as a smallware dealer. And she died there, at number 39, on June 23rd 1891.

Gap alert!  I believe that Maria Potter married coalminer Ebenezer Thomas Hutchinson in 1864 and in the last decade of the century was living in Byron Street.

One of William and Sarah Potter’s sons was Thomas, born in 1829. In June 1854 he married Jane Rigley, daughter of collier Benjamin and Mary (nee Tomlinson) of Moors Bridge Lane.
Just over 18 years of marriage and 11 children later Jane died at 16 Chapel Street, aged 37.
These children included a Sarah, Ann and Ellen, but no Maria.
Thomas died in January 1904 at the home of Harriet, another of his daughters, and her husband Timothy Cordon, then keeper of the Erewash Hotel beerhouse in Station Road.

Daughter Elizabeth, born about 1836, married Cotmanhay coalminer Henry Henshaw on April 6th 1857 at Christ Church, Cotmanhay. About one month later she gave birth to a daughter who remained unnamed until her death on May 15th 1857, aged two weeks … a death which seems to have had a severe effect upon Elizabeth. It was reported that on the night of July 3rd, Elizabeth had spoken to a sister and stated that she had poisoned her child, by adminstering to her a dose of laudanum — thinking that the baby would be too much trouble for her to bring up. The medicine had induced convulsions in the child and she died a few hours later.
On Saturday morning, July 4th, Elizabeth prepared breakfast for her husband who then left for work. Then she was seen walking towards ‘Stable Well’ near Cotmanhay Wood but only later was she reported missing. The well was dragged and Elizabeth’s body recovered.
The inquest jury returned a verdict of ‘Death caused by temporary insanity’.

At Number 5 was … “Mr. Frank Hallam lived in the double-fronted house, with his wife and three children.” (the largest in the row ?)

The 1861 census shows mineral agent Francis Hallam living in Queen Street with his wife, seven of his (at least) ten children, a son-in-law and a grand-daughter.
In 1871 he was the agent to William Adlinton & Co., farmers and coal merchants.

Born in 1815 in Mapperley, Frank was the son of coalminer Francis and Sarah (nee Brentnall) and married Rebecca Hartshorn in June 1836.

One of the children is eldest daughter Eliza who had married lacemaker Samuel Tilson in August 1859 and Ann Deborah Tilson is the grand-daughter in the household.

The rest of the Tilson family are living a few doors away in another of the Hallam houses.

Cotmanhay-born miner George Wright had married Sarah Ann Bell in October 1850, she being a daughter of William and Phoebe of the Travellers’ Rest in White Lion Square.

Before marriage he had at least one illegitimate daughter — possibly two — with Mary Morley of Cotmanhay, daughter of schoolmaster John and Mary (nee Henshaw).
His legitimate children were Selina, who married cabinet maker Jonathan Slack Pursglove in 1872, and Henry who went on to be a mining engineer.

For a short time around 1870 George was publican at the Spring Cottage Inn.

Living with them in 1861 were children Eliza and Jonathan.

Just over a week after the 1861 census was taken Mabel Tilson died in Queen Street, aged 47.

Their eldest son Samuel married Eliza Hallam in August 1859 but she died at their Queen Street home in July 1863, aged 25.

And finally at Number 8 we have … “Mr. John Mee, machinist at Ball’s, his wife and two daughters Ann and Phoebe (who also worked at Ball‘s), lived in the bottom one.”

Their daughters were Ann Elizabeth and Phoebe; a son George had died in infancy in 1848.

In July 1876 Frank Hallam put his row of houses up for sale by auction and advertised in the Ilkeson Pioneer….. see if you can match the descriptions to the map above. 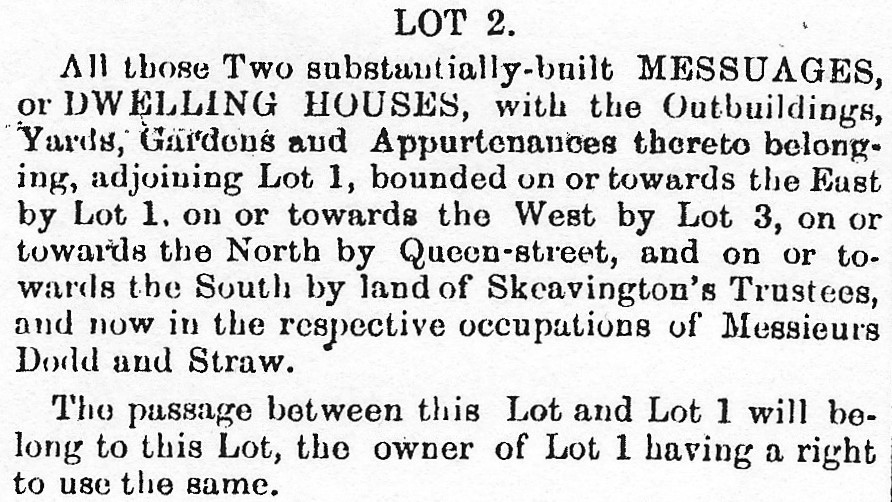 At the bottom of Queen Street was William Hawkins.