Adeline remembers something of the Goddards …. “Ruth (Goddard) … was a very popular singer. She married Mr. Harry Beaumont, who was for many years organist at St. Mary’s Church.”

Ruth Veranna Goddard was the youngest child of John and Ruth Goddard, born at 11.20 am. on January 22nd 1850, 20 minutes after the birth of her twin sister Mary. (the name Veranna/Verana can be traced back through mother Ruth’s family line).
The Goddard musical interests did not stop with the strong connections to the Ilkeston Brass Band. Ruth Veranna was ‘prior to her marriage the leading vocalist in the town, and took part in many of the best concerts in the neighbourhood’.

Here, for example is Ruth Veranna, aged almost 15 …
Derby Mercury Jan 4th 1865.
Penny Readings at The British Schoolrooms.
The readers were Mr. H. Tatham, Mr. Lissett, and the Revs W.W. Jubb and Barrat. Miss Long played a fantasia on the pianoforte, which was well-received. Miss Ruth Goddard and Miss Beetham also favoured the audience with songs during the evening.

At a similar Penny Readings at the same venue …
Nottingham Journal Oct 28th 1865.
Mr. Bowes’ name was next on the programme, announced to sing ‘The Village Blacksmith’ (Longfellow) but was unable to attend. Miss Ruth Goddard supplied his place and sang ‘The day her mother died’ very nicely.

Ruth’s marriage on December 2nd 1867 at Christ Church, Cotmanhay, was to Henry Hoggard (sometimes Hoggarth) Beaumont of Bath Street, watchmaker, jeweller and dealer in musical instruments and himself an organist at St. Mary’s Church for several years.

In 1861 and still living at Ollerton, Henry was present at the parish church of Warsop, about seven miles away for the opening of a new organ  … … ‘a first class instrument (with) thirteen stops (and a) rich mellow tone’, built by Messrs. Bevington & Sons, of London.
Although the instrument was played by Martin Bevington, master organ builder of London, he was aided by the Church Choir which was at that time was trained by Henry, who was also the church’s organist. The audience to this event was stuffed with local gentry, the ‘best families of the dukery‘. 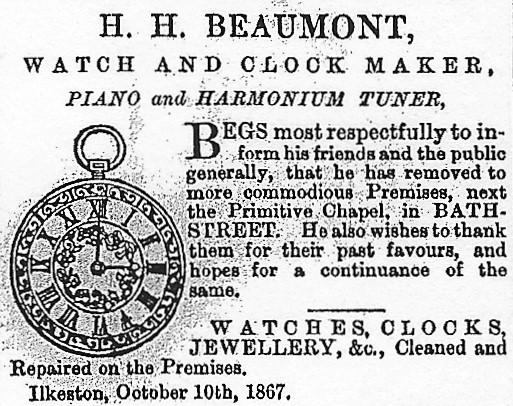 In 1867  Henry set up his business in Ilkeston, at 31 Bath Street, as a jeweller and dealer in musical instruments  … though he had kept a similar business in Warsop for a short time just before that. His Ilkeston shop was past Daykin’s Row and the Primitive Methodist Chapel, on the way up to the Market Place. On the 1871 Census it was number 31 Bath Street.

By 1881 Henry had moved across the road, to 95 Bath Street, just a few premises up from the Prince of Wales beerhouse, just after passing Smith’s Yard. In the late 1880’s there was a severe renumbering of the premises in Bath Street and Henry’s shop was now number 64. At this time Henry was a supplier of “German pianofortes and American organs and also … English pianofortes by the best makers. Also harmoniums and all kinds of instruments and fittings. Also clocks, watches and jewellery.  … an authority on all matters relating to the best class of instruments”.

Here are Henry and Ruth, a young couple (from the family album of Jim Beardsley) 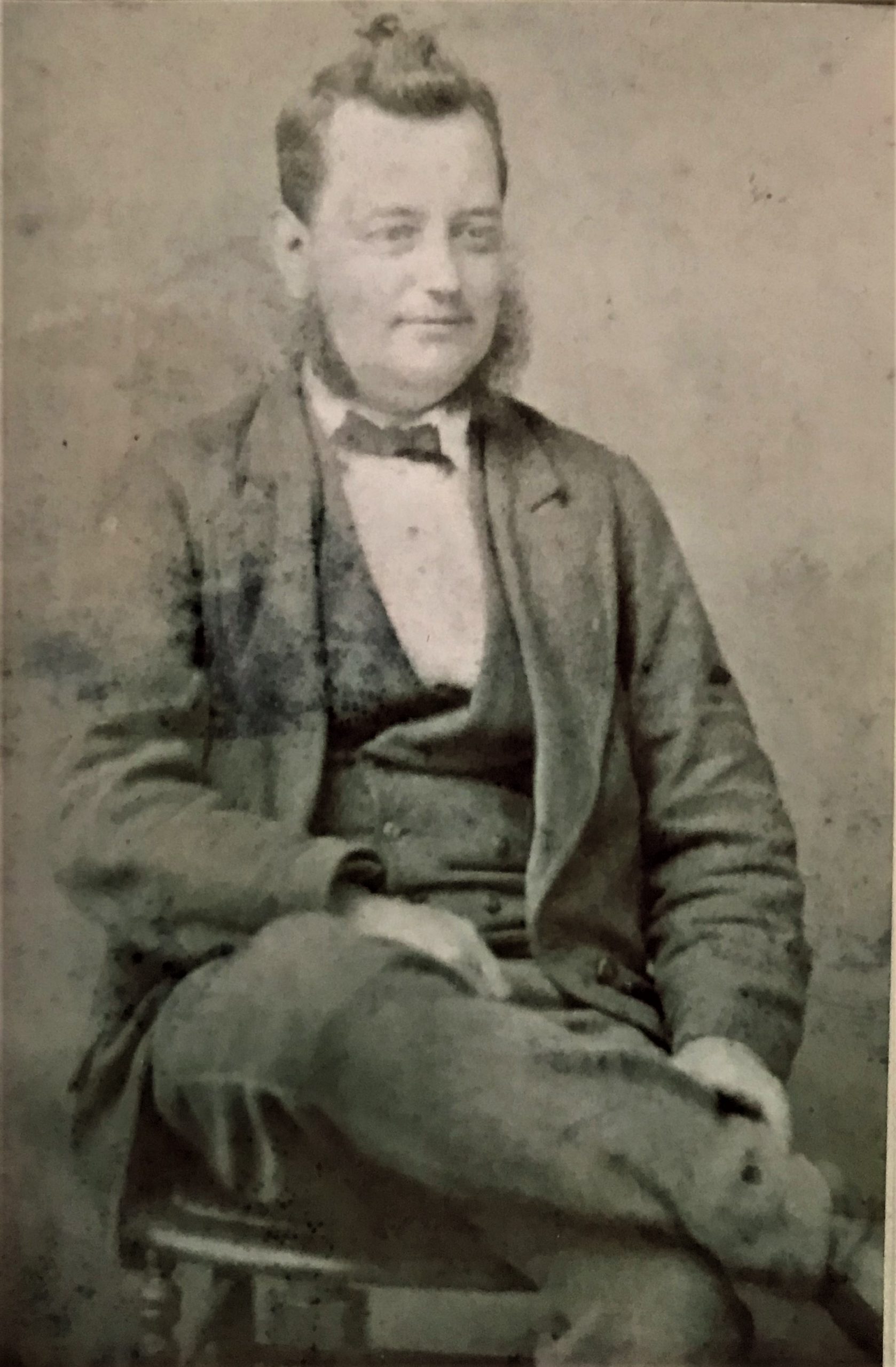 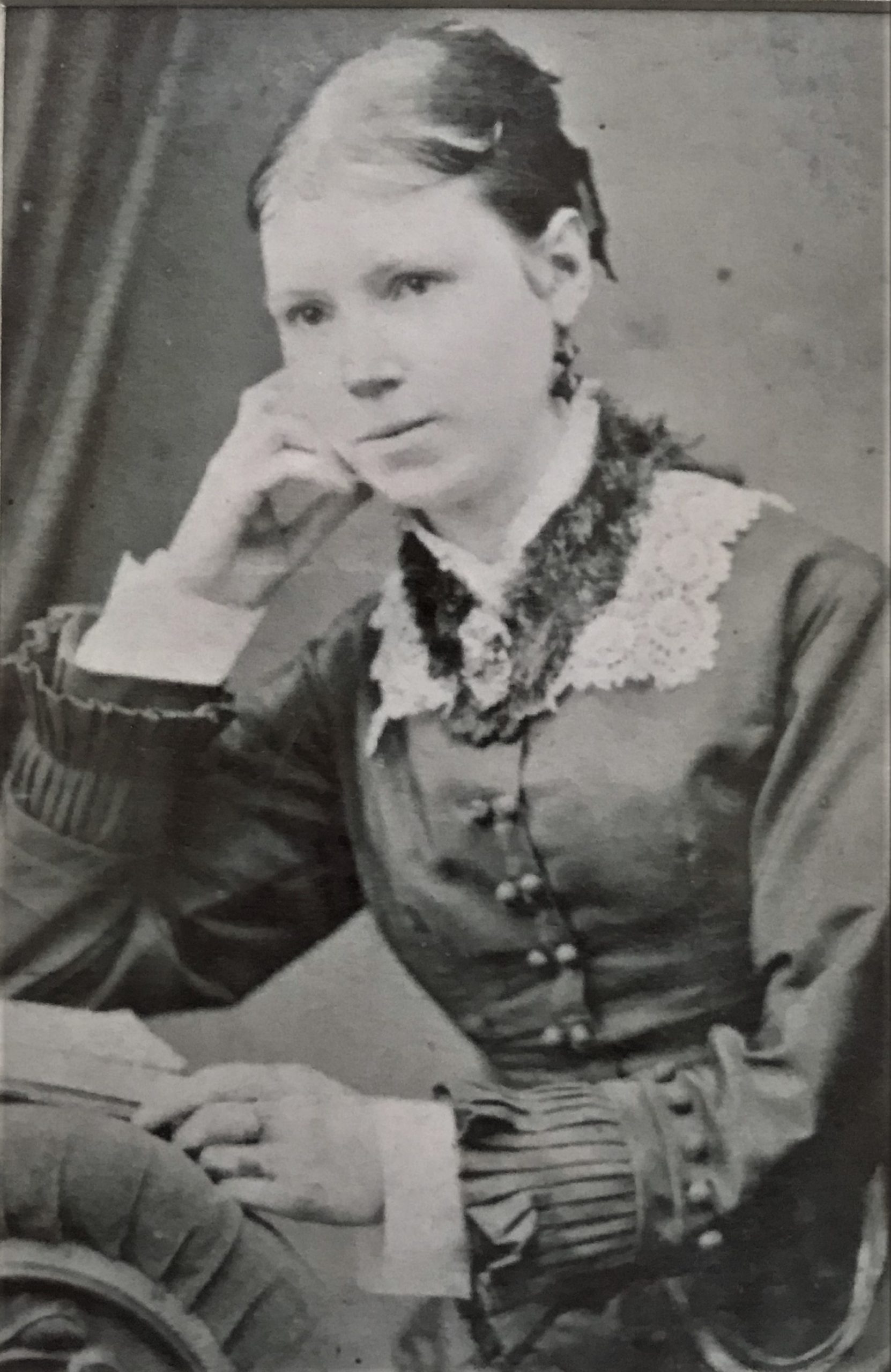 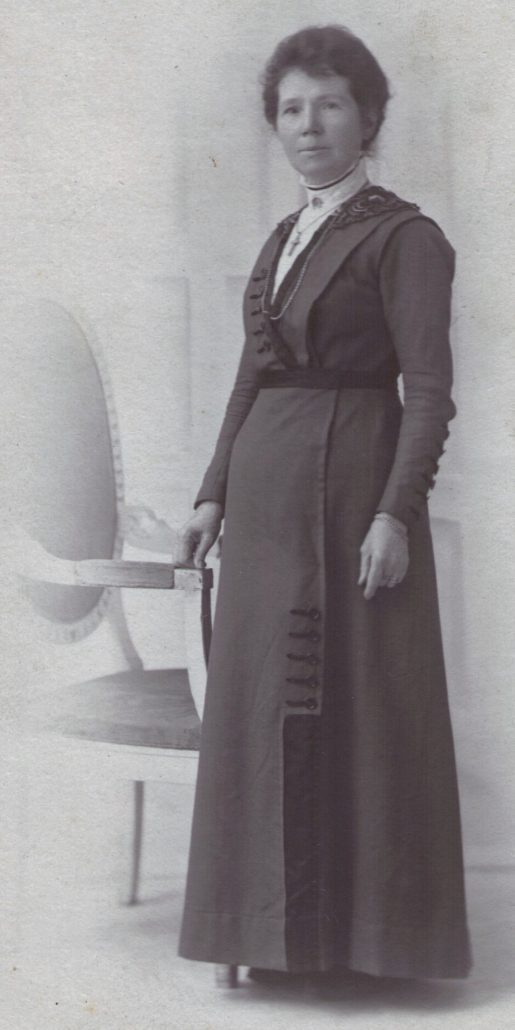 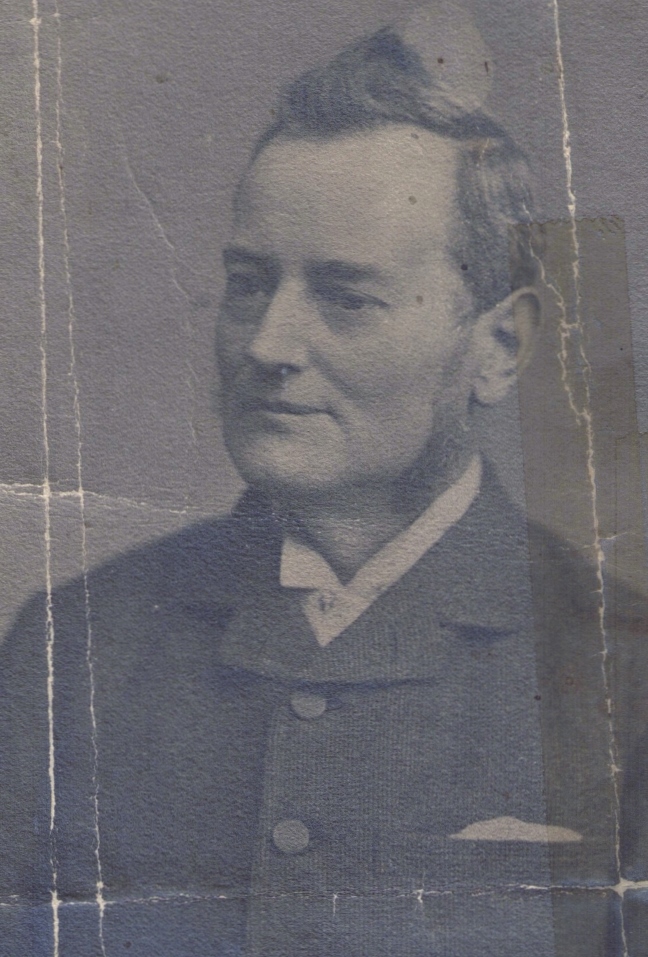 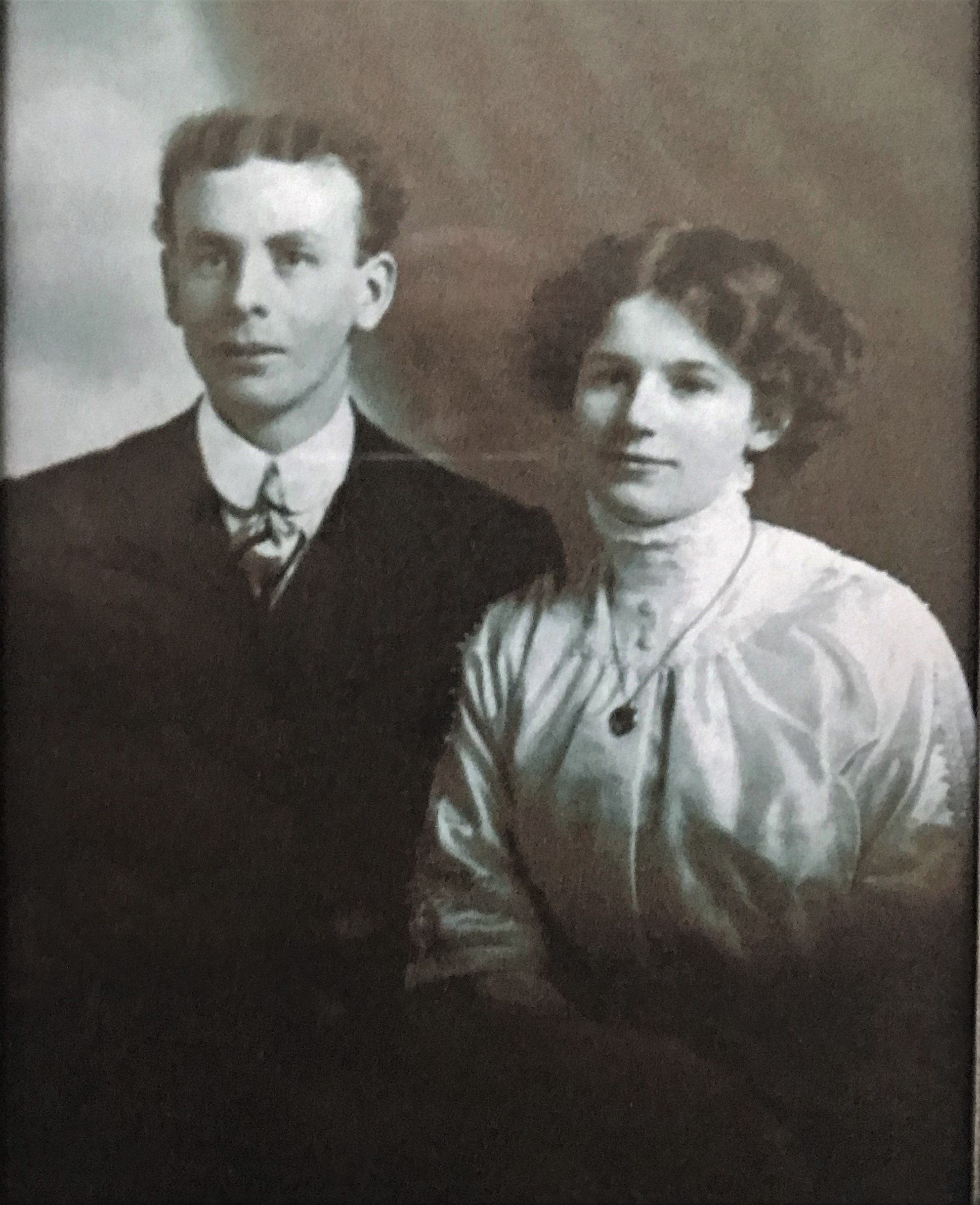 At the end of the century Ruth and Henry Beaumont lived in the newly-built Vernon House at 87 Lord Haddon Road — which until recently (August 2014) served as the Register Office for Ilkeston.

Pam recalls  …. my Mom said Ruth (her grandmother) was a wonderful pianist as well as a singer.  Mom lived with her for awhile in Vernon House, when her mother and father went to South Africa. I read somewhere that Ruth also went away to play with ‘the band’.
They certainly were a musical family! 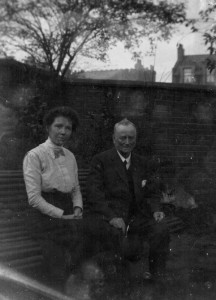 Henry and Ruth relaxing in the garden of Vernon House, Lord Haddon Road behind them.

On Thursday August 26th 1899, Richard Holmes, an aged blacksmith and farrier who traded in Providence Place, was taking a pleasant stroll up Lord Haddon Road when he was suddenly gripped around the throat and dragged to the ground by a burly young assailant. The latter took a knife from his coat and ‘demanded of Mr. Holmes his money or his life’. Before Richard could make a decision, enter Henry Hoggard Beaumont !!

Sitting quietly in his home, the noise of the affray had attracted Henry’s attention. He left Vernon House to confront the assailant, squared up to him, threatening to hit him on the knuckles with his stick if he did not leave ‘the old gentleman’ alone. Ruth had followed her husband into the street and soon neighbour Edward Clayton joined them.

At this point the attacker — perhaps realising he was becoming seriously outnumbered — skulked away, muttering threats and oaths.

Thomas Davis of Trueman’s Court was later arrested, tried, convicted and fined for the assault.

And finally …  the photo on the left is of a young woman, possibly  Ruth Veranna … it has been passed to Pam from Jim Beardsley and his sister Madeleine (my thanks to both of them). Is it her ?  What do you think ? 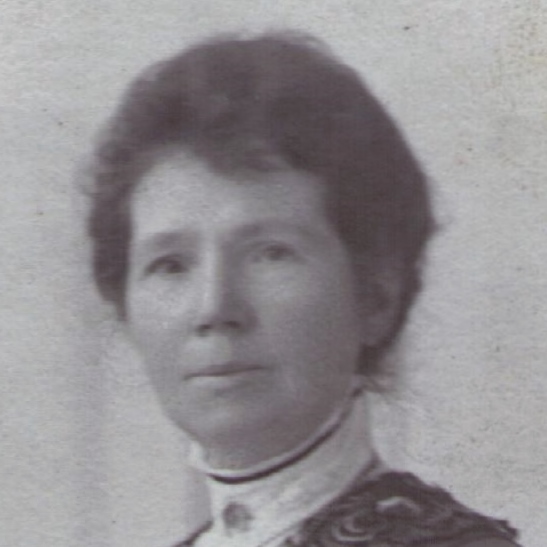 And here’s the full picture of the younger lady … Pam writes  “Jumping to conclusions (as am prone to do), it looks like a certificate, or perhaps sheet music, that Ruth is holding in the photo.  A special event to commemorate something.
“(As an aside, Mom said her grandmother taught her to spell “beautiful”!   B-e-a-utiful ! )” 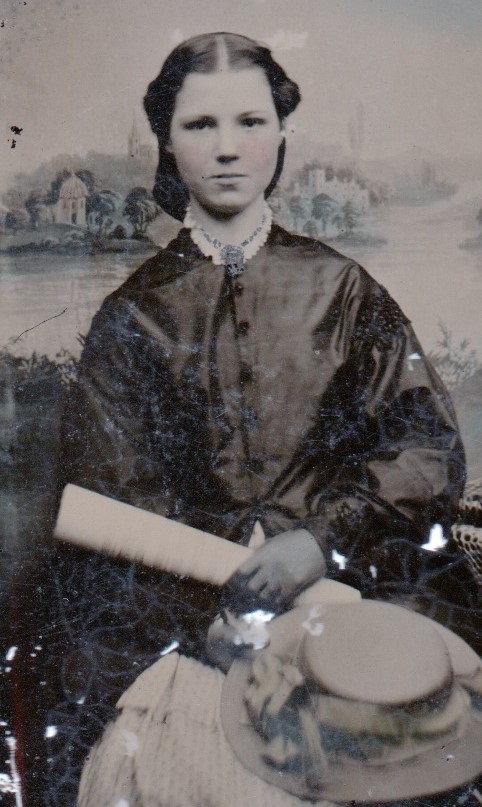 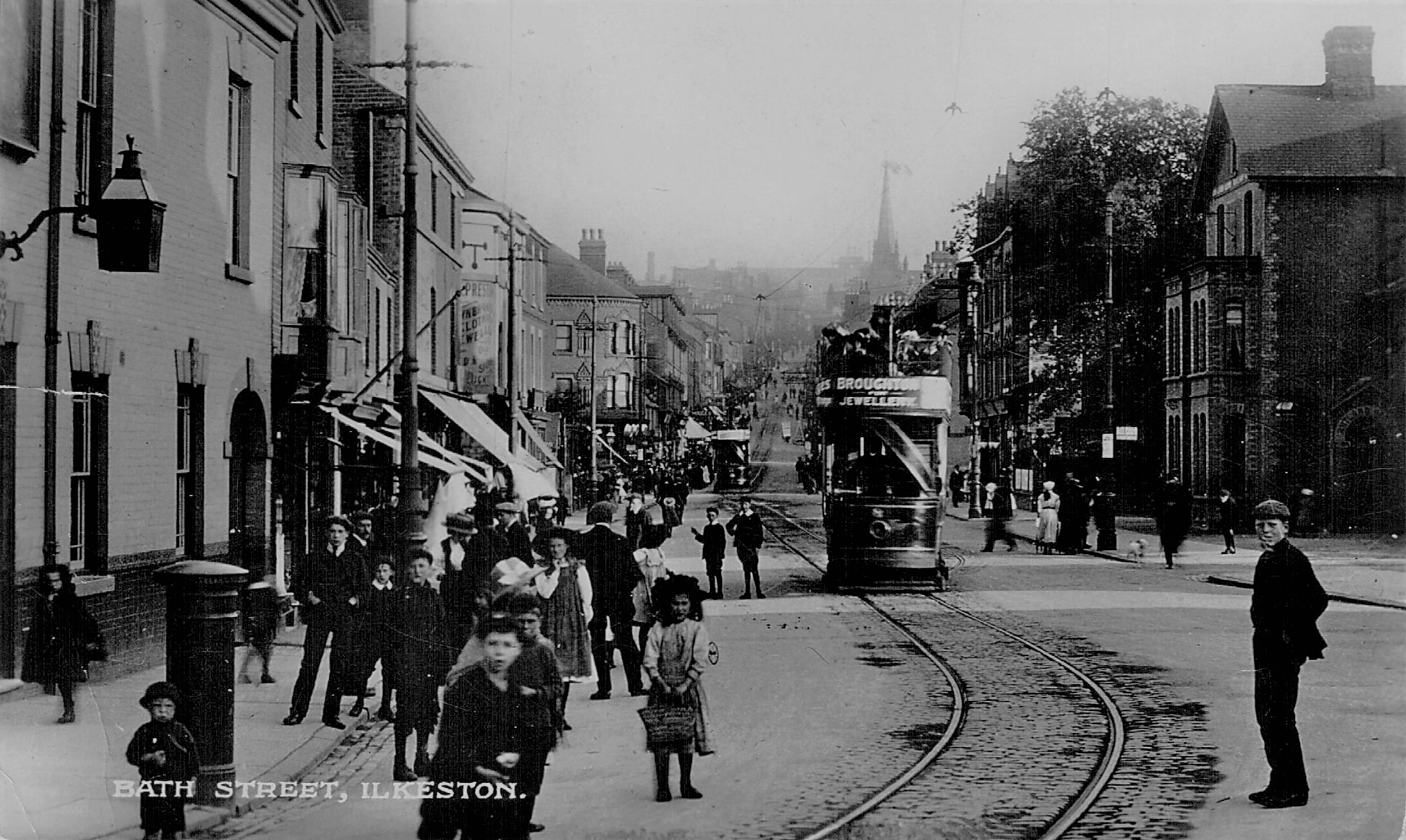 This was forwarded to me by Pam Bates …. it was originally sent to her grandmother Gertie Beardsley (Maud Gertrude Beaumont, daughter of Ruth and Henry) in South Africa, from her sister Lillie, who was visiting Ilkeston from Canada for a short time. The card was bought at Bestwick’s shop in the Market Place.