Pam Bates has made several contributions to the Old Ilkeston site and I want to thank her once more for sending a group of fascinating school photos which you can find below.

This got me thinking (!!)  — there may be other people out there who have got similar photos which they might like to share.
So I have started this new section with Pam’s collection, in the hope that it might grow …. we shall see.
If you have any photos, please send them along. (to [email protected])

Pam is the great-granddaughter of Amos Beardsley, master baker of South Street and his wife Sarah (nee Birch, born in 1843).

Sarah’s younger sister, Mary Birch (born in 1850) married West Hallam-born Thomas Ebbern, butcher of Bath Street, in 1872. Their youngest child was Annie Ebbern (born in 1892) who married Arthur Edwin Paling, coalminer of Cossall in 1915.
Thus we have a link between Beardsleys, Ebberns and Palings…. and between Ilkeston and Cossall.

Pam has sharpened up this first photo (below) as much as possible in her attempt to make the name-board held by the young lass in the front row as legible as she can. Her conclusion, supported by her husband, in that it bears the words ‘Cossall School, Group 3’ with the year ’89, top right … and I would agree !!

Wright’s Directory of  Nottingham 1888 lists Cossall as having a National School, the Mistress of which is Miss Harriet Broadhead born in Brampton Bierlow, Yorkshire in 1856. She had lived in Cossall village at least since 1881, appearing on the census of that year as a school mistress/ lodger with an aged widow, Eliza Cross.
Is that Harriet on the left ?? 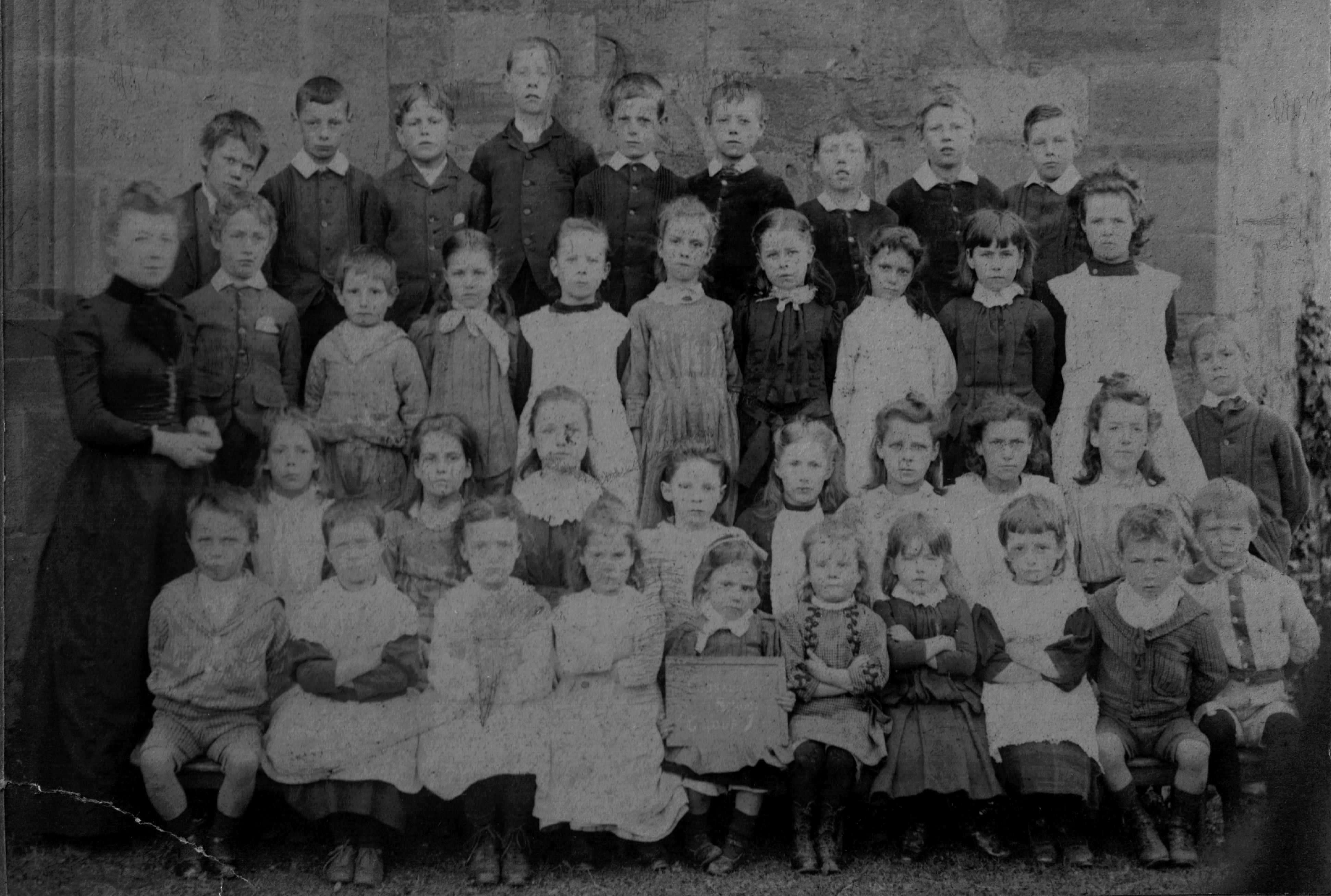 Unfortunately we cannot be sure, as Harriet doesn’t feature on the 1891 Cossall census. I believe that she returned to her native Yorkshire and married Andrew Ping, Clerk in Holy Orders, on Christmas Eve 1889 .. at Wentworth Church, close to her birthplace.

On the 1891 census the Cossall school mistress is very recently-married Mrs. Elizabeth Helen Thompson (nee Hind), aged 28, wife of iron turner David. Is it Elizabeth Helen in the photo?

Although the photo is in Pam’s family collection, she is not sure of its connection … she suspects that it lies with the Paling family.
Arthur Edwin Paling (the later husband of Annie Ebbern) was born at Babbington (adjacent to Cossall) on September 21st 1885, son of coalminer Thomas and Hannah (nee Cook). There was an older brother Thomas William, born February 24th 1878. The family is living at Cossall on the 1891 census where both lads are described as ‘scholar’.
Could they both be on the photo ? Thomas William on the back row with the other older boys ? .. and Arthur Edwin perched near the front ?

This second photograph appears to have been taken a year or so later. Pam guesstimates it be around 1890 ?
She believes that the girl in the centre, with the spreading white collar, is Mary Elizabeth Ebbern (1889-1961) … she also appears in several photos of the Ebbern Family. 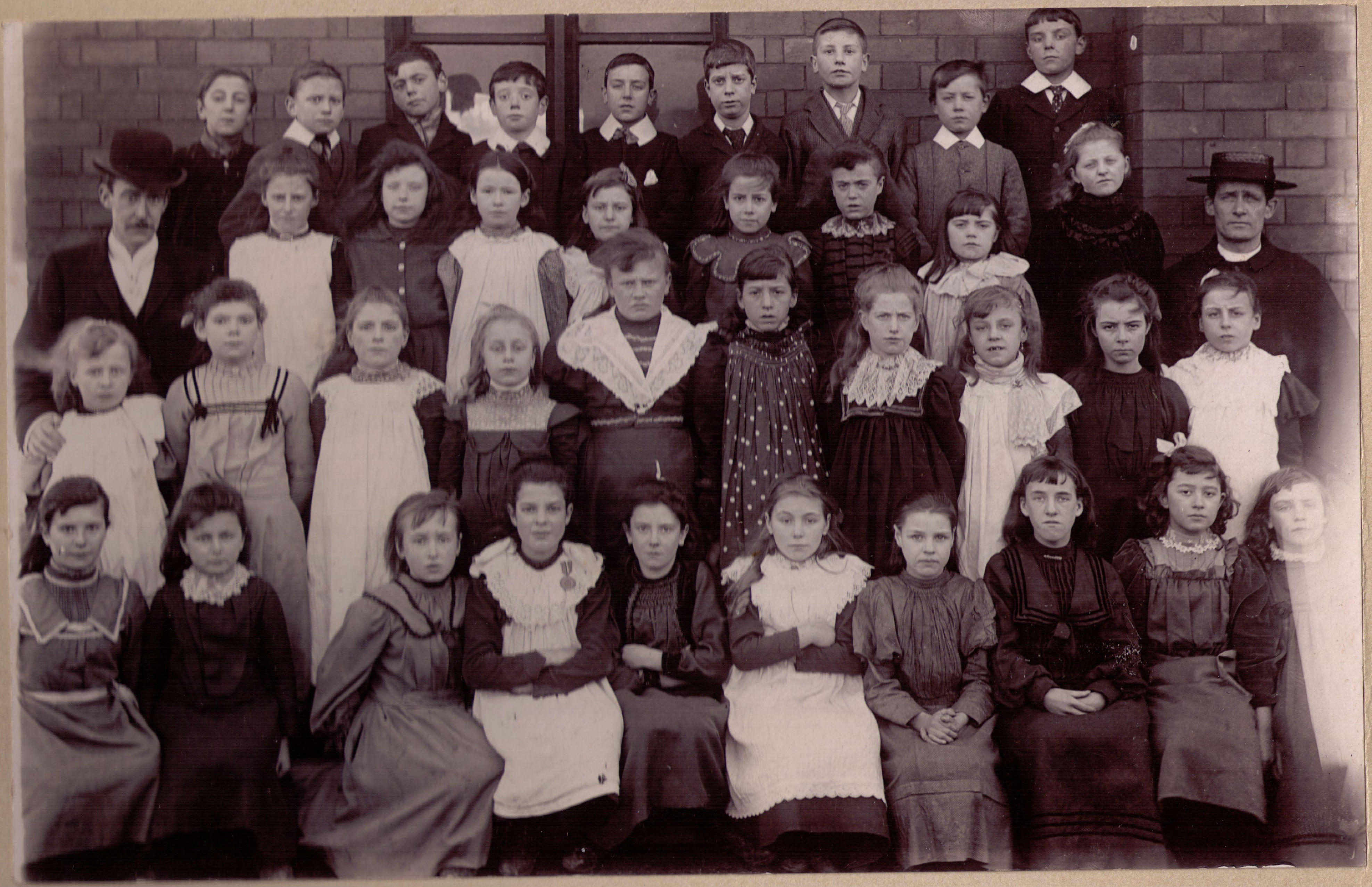 I am sure there are people out there adept at dating photos like this !!

Who says that School Days are the happiest days of your life ??!! …. although I do detect the beginnings of a smile on at least one face.

Arthur Edwin and Annie Paling had at least four children, including twins May and Elsie (can you spot them in the photo ?) born on August 24th 1916. Pam thinks that they appear to be about 5 or 6 years old, dating the photo at about 1921/22.
She knows that the family did live at 59 Green Lane, Ilkeston for many years and they were there at the beginning of the War in 1939….
I met twins Elsie and May twice in Ilkeston at 59 Green Lane.  Neither married.  Their caregiver was Pam Bemrose, she looked after them wonderfully, and Pam passed on the family photos to me when the ladies passed away.
The anonymous background doesn’t help to place the school.

And here is the youngest member of the Paling family … Frank born on January 9th 1919, at the very top left. He looks about 10 or 11 suggests Pam.
Could this be Hallcroft school? 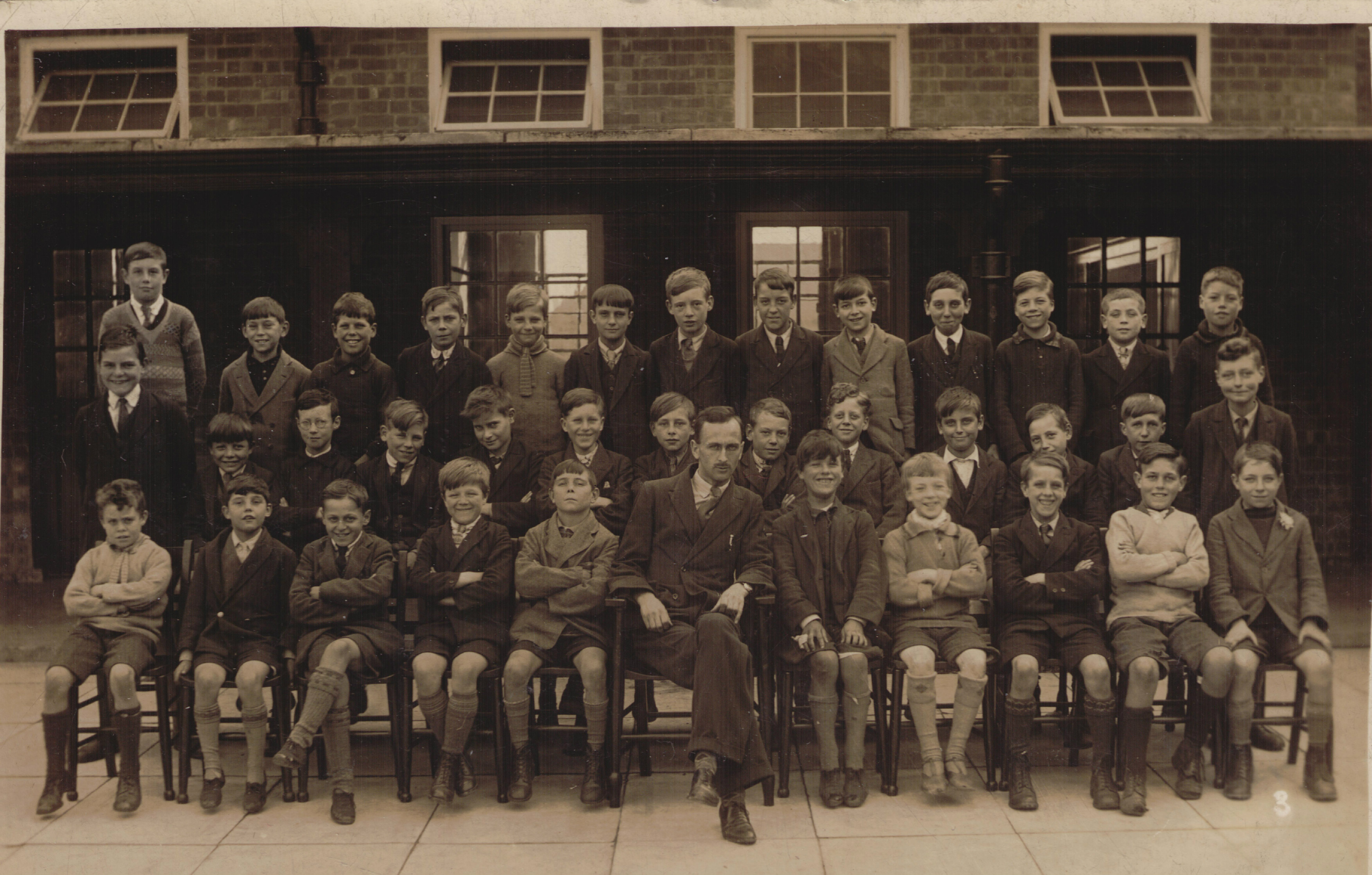 Smile ! And sit up straight !! Although one person appears to be slouching !!!

And here are Frank’s twin sisters at the same school.
Elsie is top left, second one in. May is top right, second one in. The girls seem to be about 12/13 ? … dating the photo to about 1929. 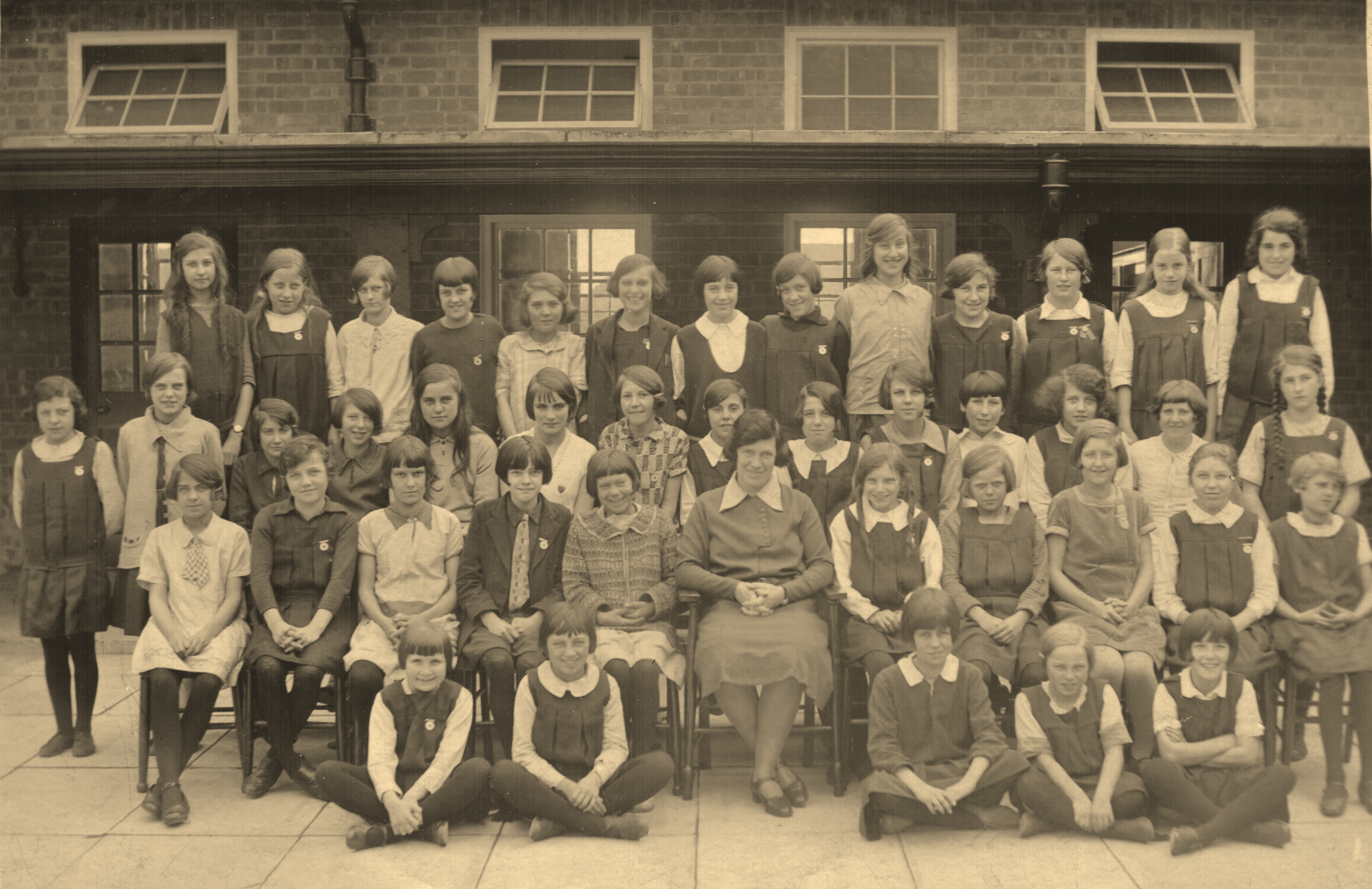 This seems a favoured place in the school for class photos. Does anyone recognise it ?

And after school days, we enjoy holidays … which most of the Paling family below seem to be enjoying too. 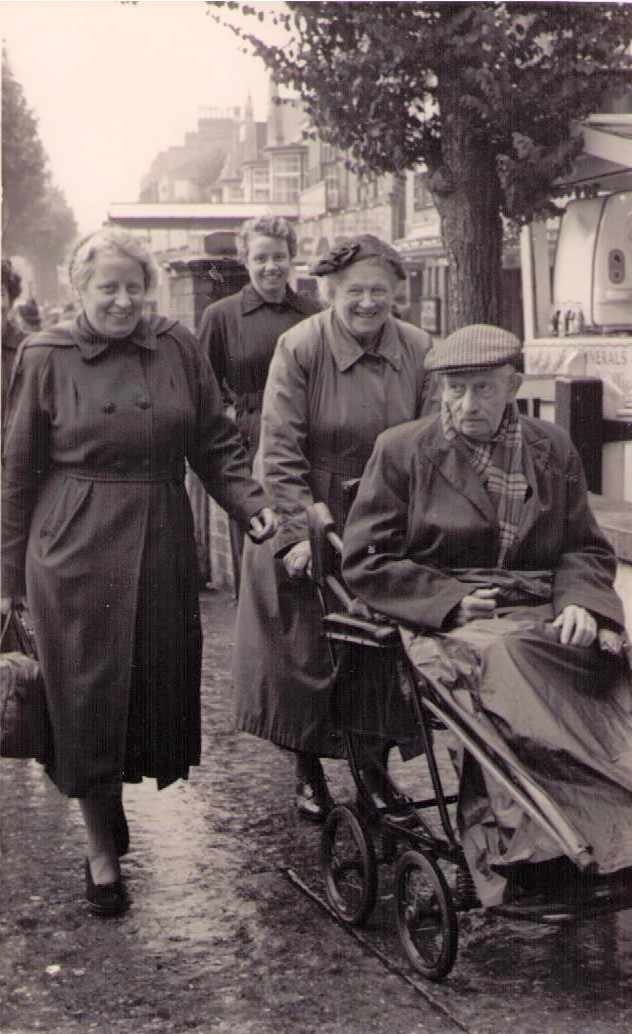 Here are the twins again, Elsie and May, with their mum Annie and dad Arthur Edwin … possibly at Skegness ? (Anyone recognise the background ?)

These photos have come via an anonymous donor. S/he is sure that a family connection links all of them but is not certain what that connection is !!

All these class photos were taken at Chaucer Street Schools … the first two just a few years after the end of World War I …. 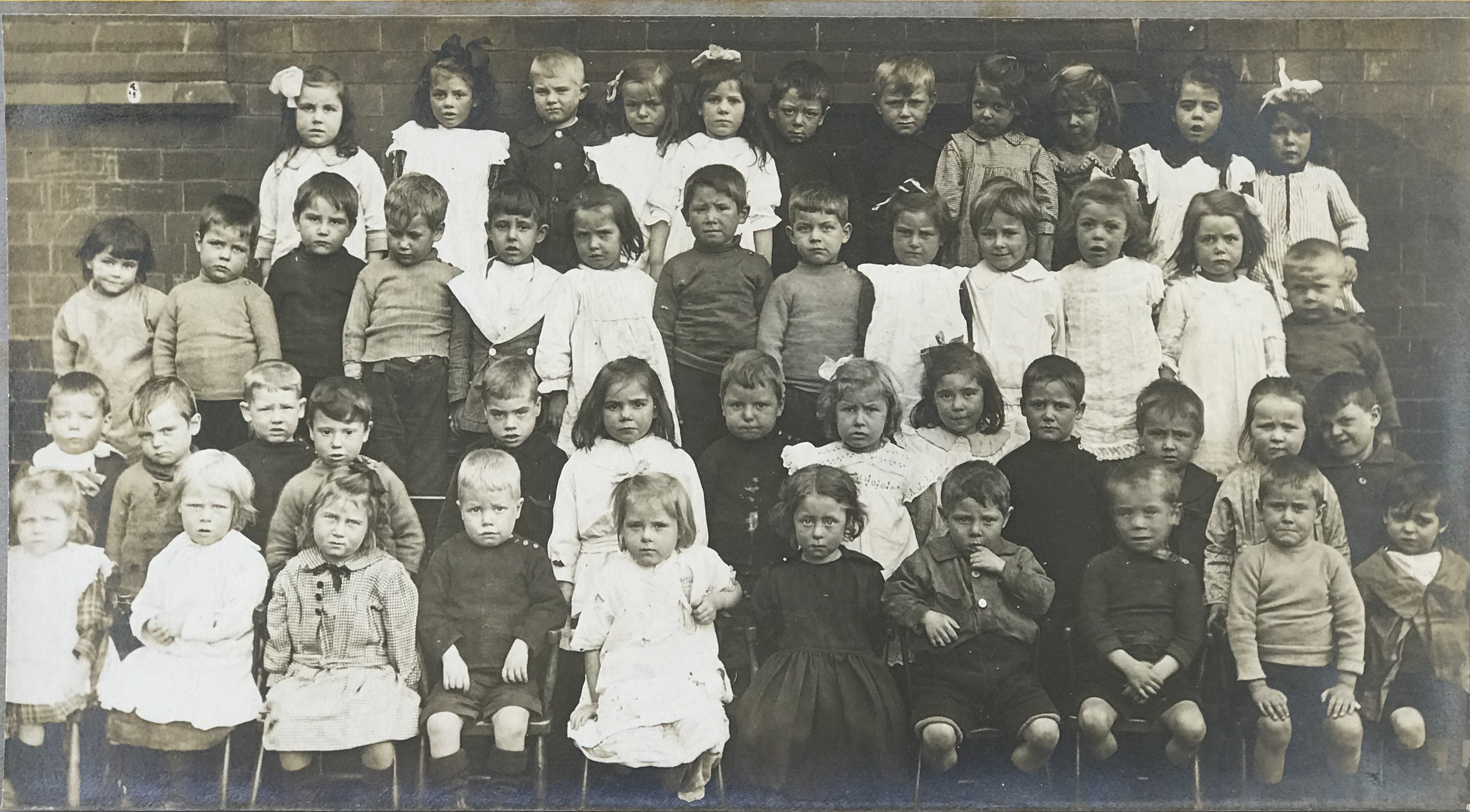 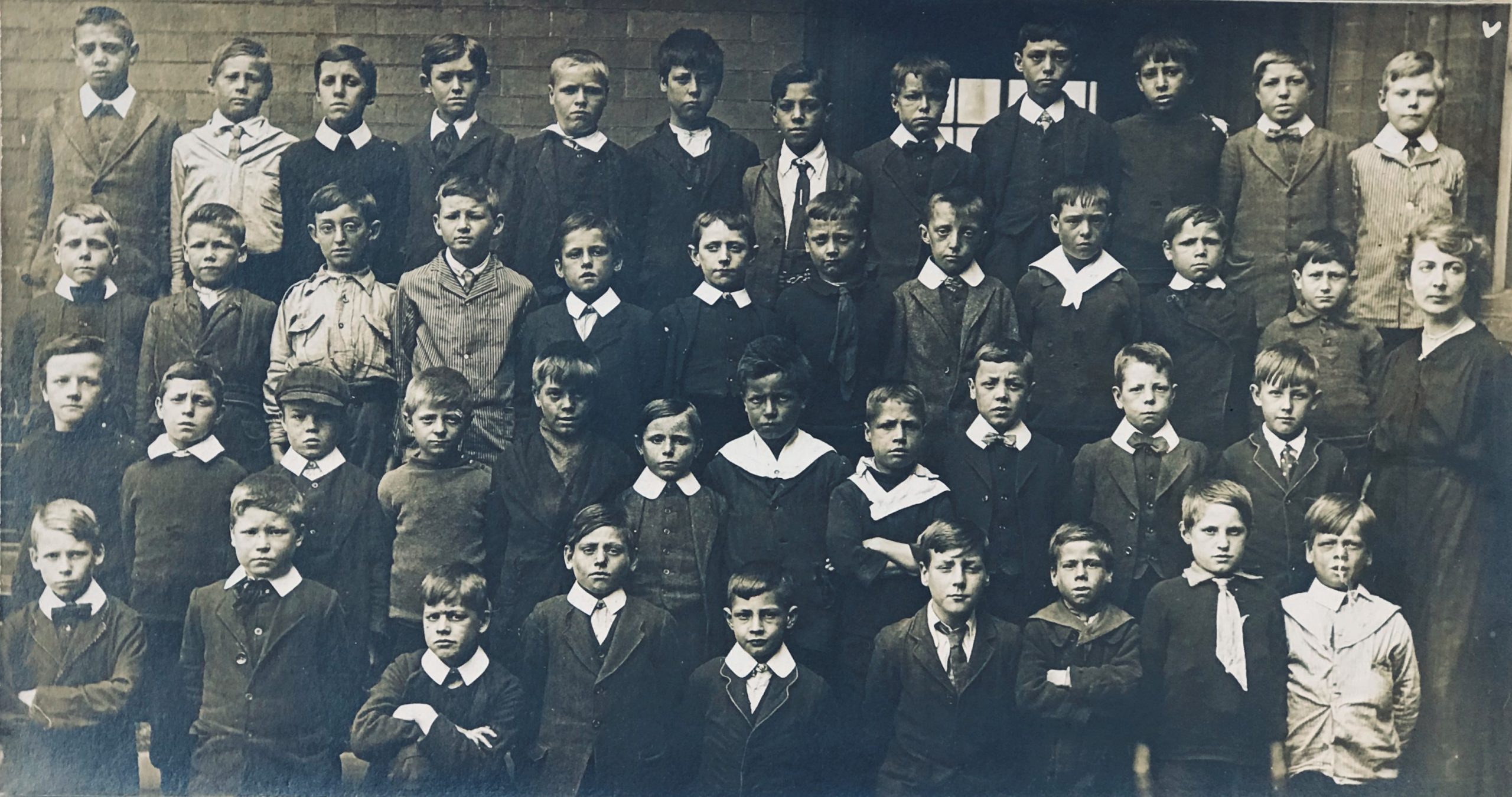 The following was posed in the early 1950’s. Perhaps someone recognises a face ??

The teacher is Mrs. Gormley (?)
Thanks to Andrew Knighton, I can now dispense with the above question mark …. he writes ….
The photo of a group at Chaucer, with a teacher in the background, asks whether it is Mrs (Nellie) Gormley. I can confirm it definitely is – she was one of my great aunts and she also taught at Kensington (I have a class photo with her on it). Ironically she always hated her photo being taken. My mother is 90 this year and she remembers when she visited her auntie Nellie on Factory Lane when she was young, she would always be asked her tables such as “what is eight times seven?”. I also remember when I was very young she kept a book on top of her television in which she noted whenever someone had visited and the date, just as if keeping a school register – old habits die hard. For all that,  she was a very kind and lovely person and I never left empty handed after a visit, always coming away with some chocolates. 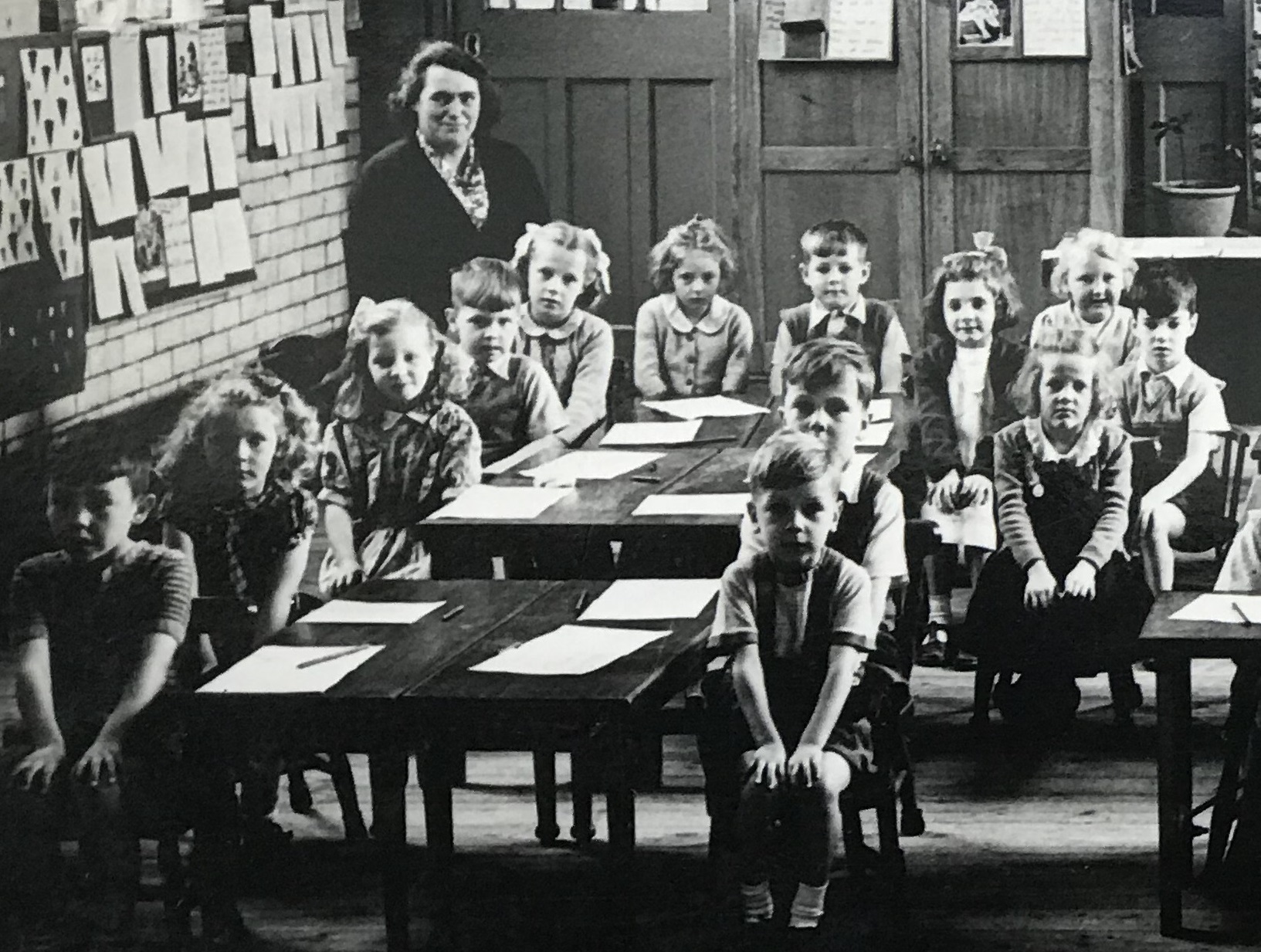 Ann Slater (nee Hopkins) has written to me to name the girl, back row on the right, as Linda Baines. 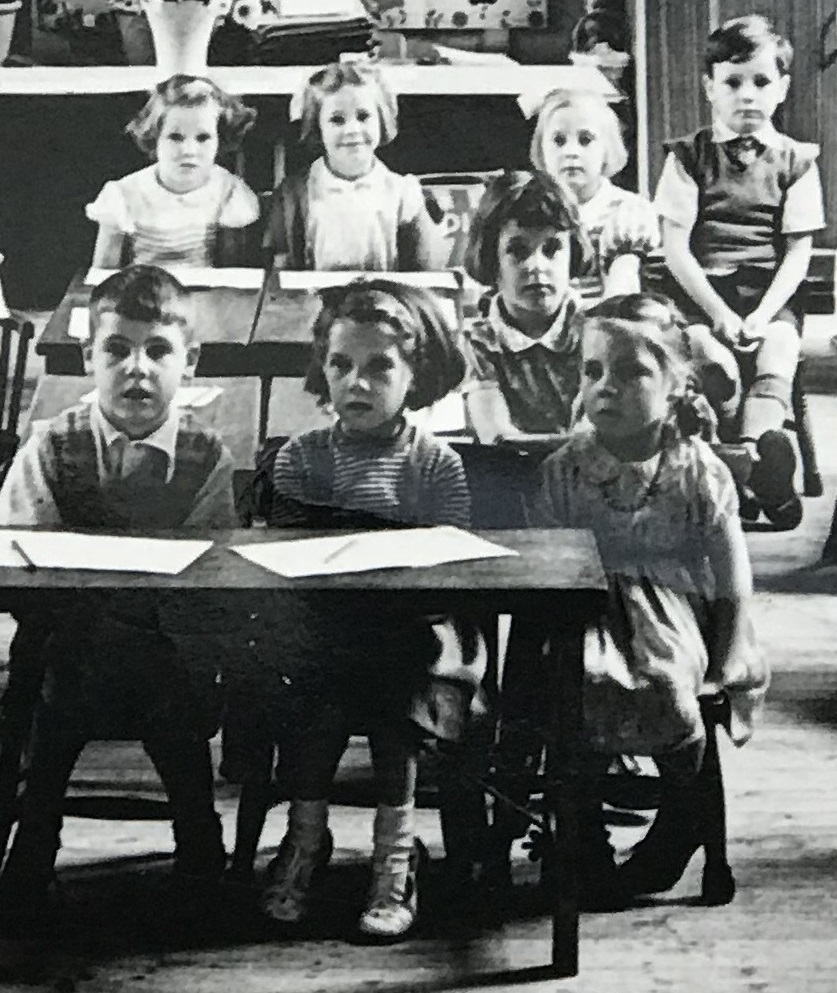 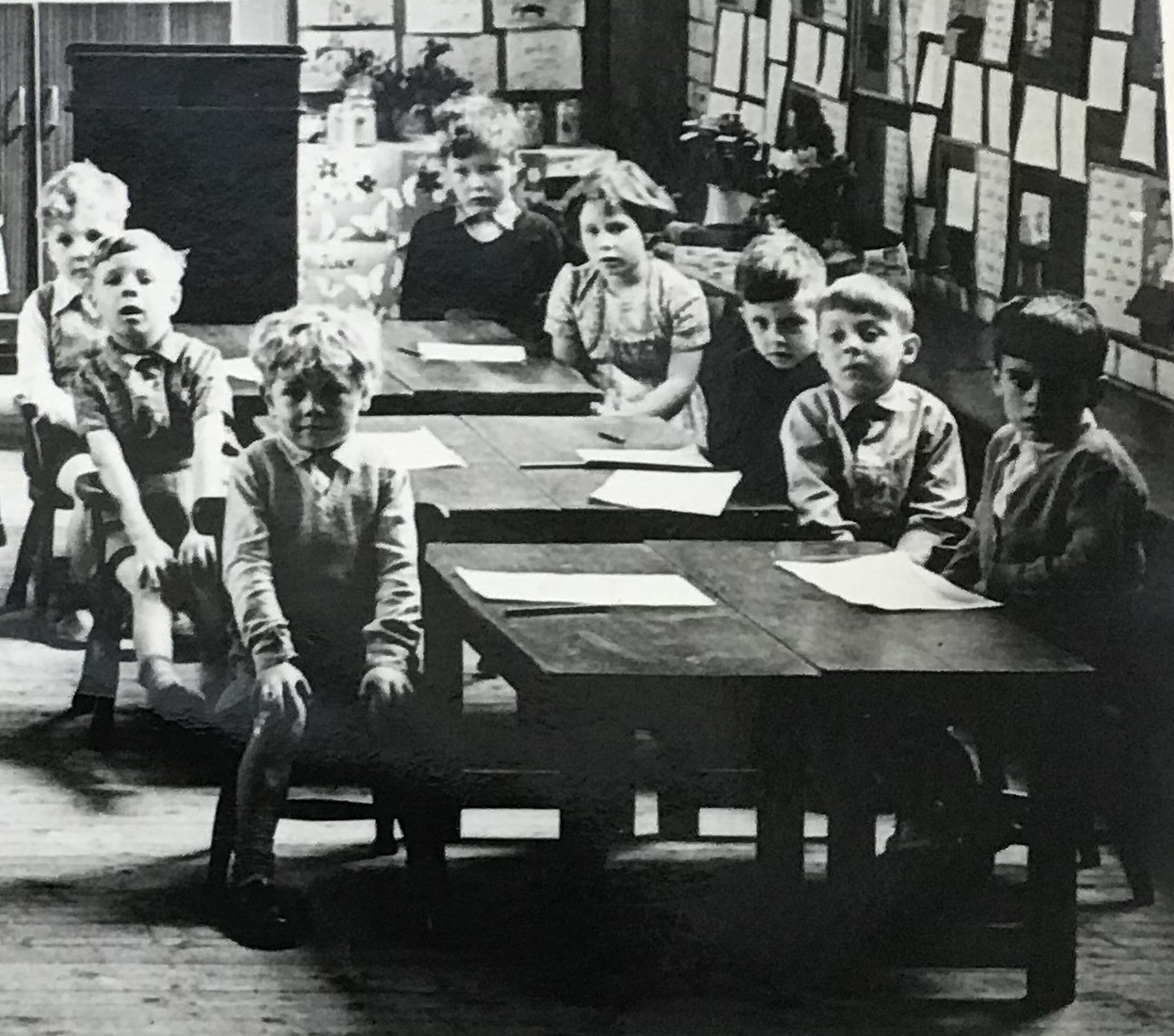 The boy second from the front, on the right hand side, is Michael Rice, the cousin of Ann Slater (nee Hopkins), who has pointed him out.

Arthur is the lad holding the pivotal pose, in the top centre !! 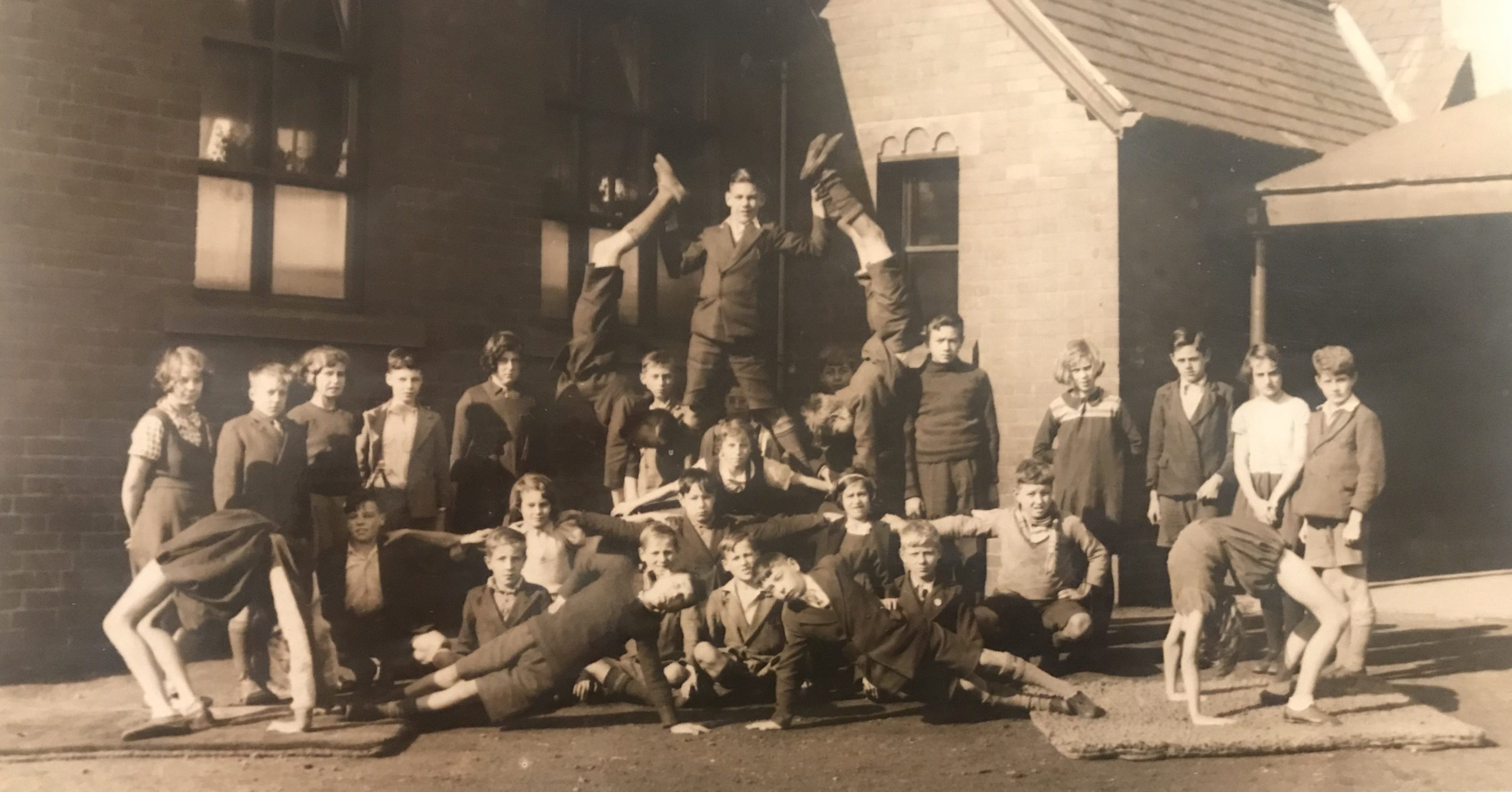 It is believed that the following crowd of eager and enthusiastic scholars is assembled for the Ilkeston and District Annual Sports Day, held at the Rutland Recreation Ground, probably in the summer of the mid-1950’s (1954 or 1955 ?).

I have divided the original photo into sections so that you can see more detail … this first section is the front left. ( showing competitors for Chaucer Girls School at the front and their Chaucer ‘supporters behind them)…. 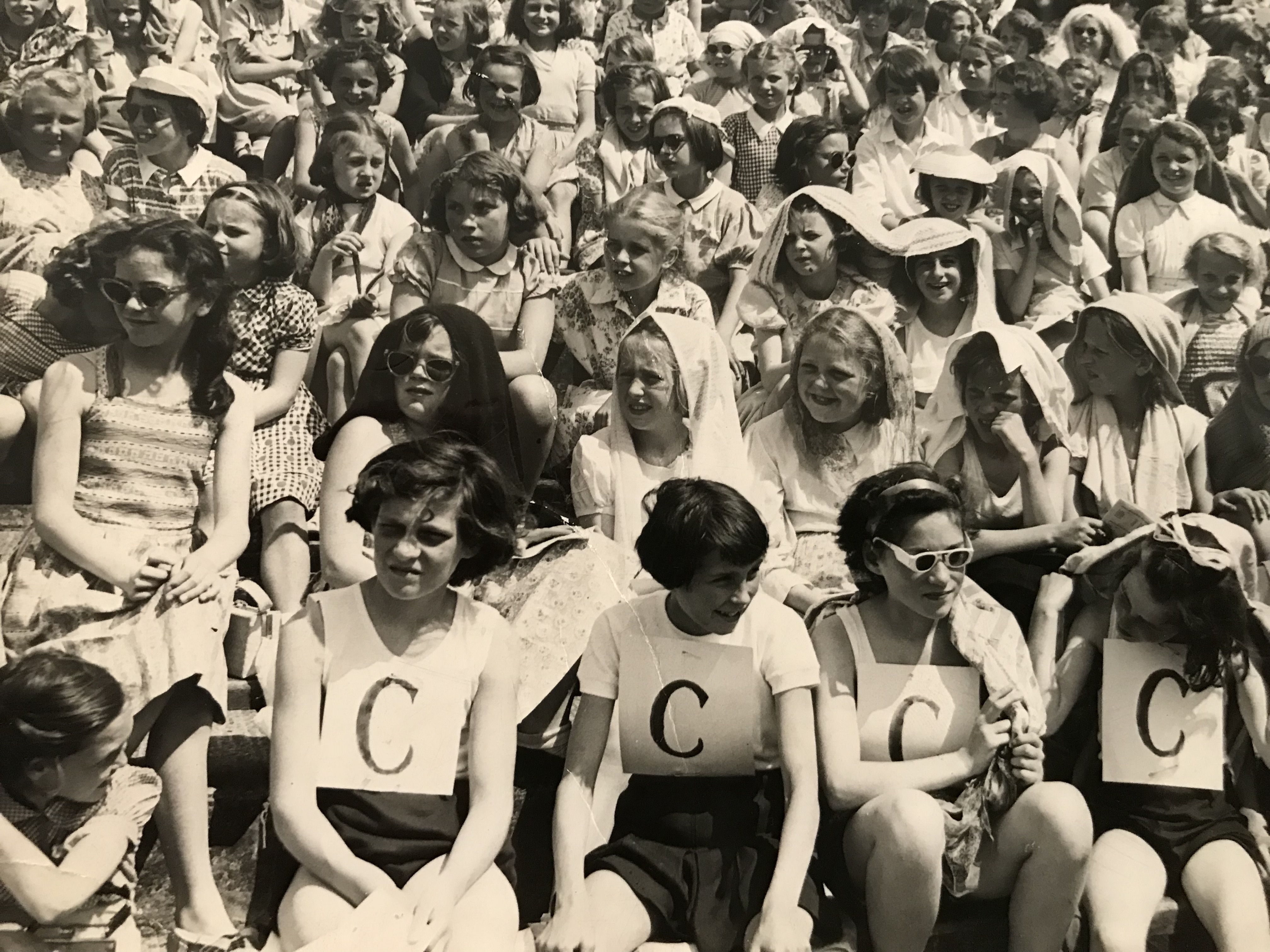 … and below is the top left section 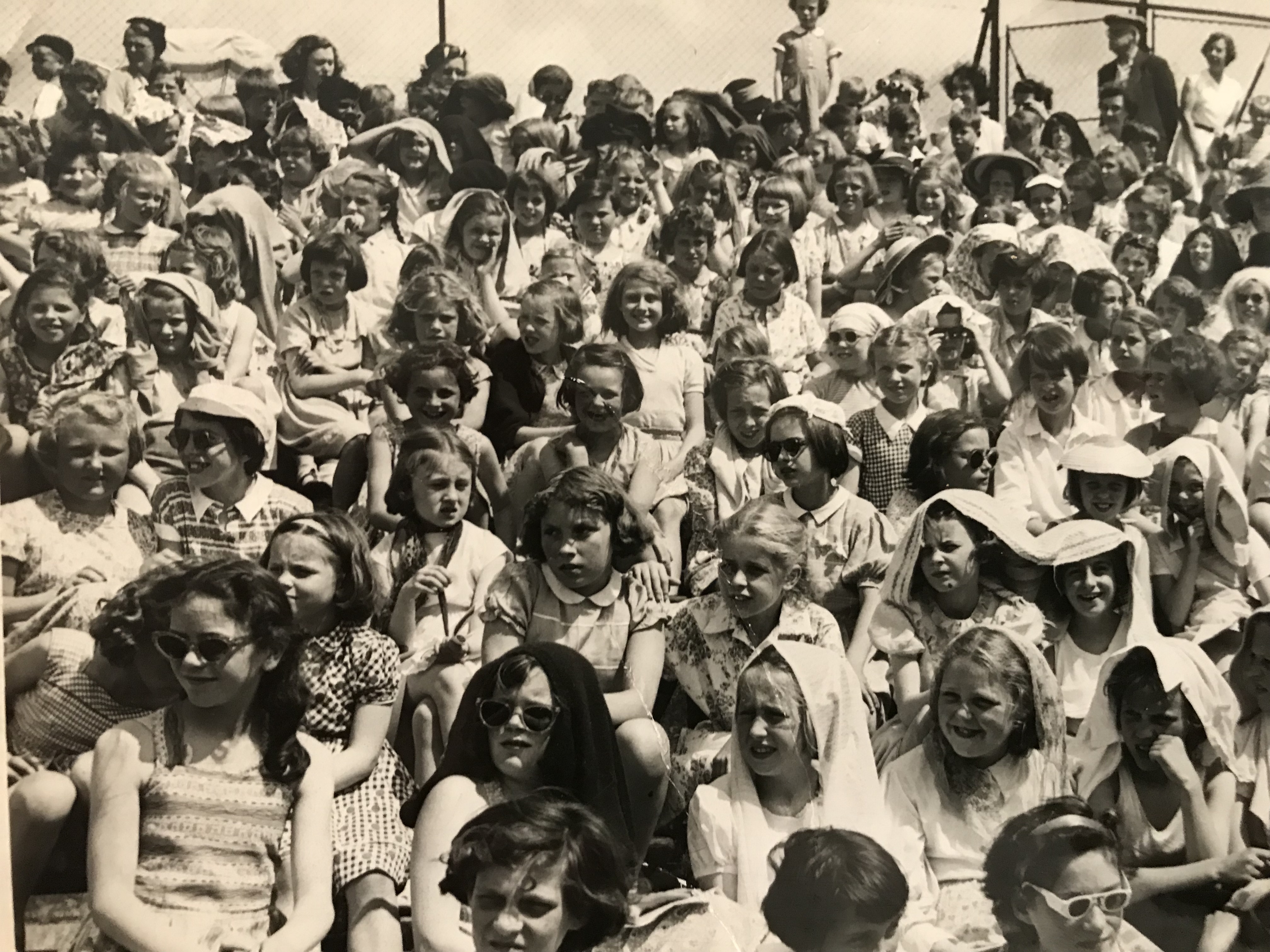 Below is the front right …. 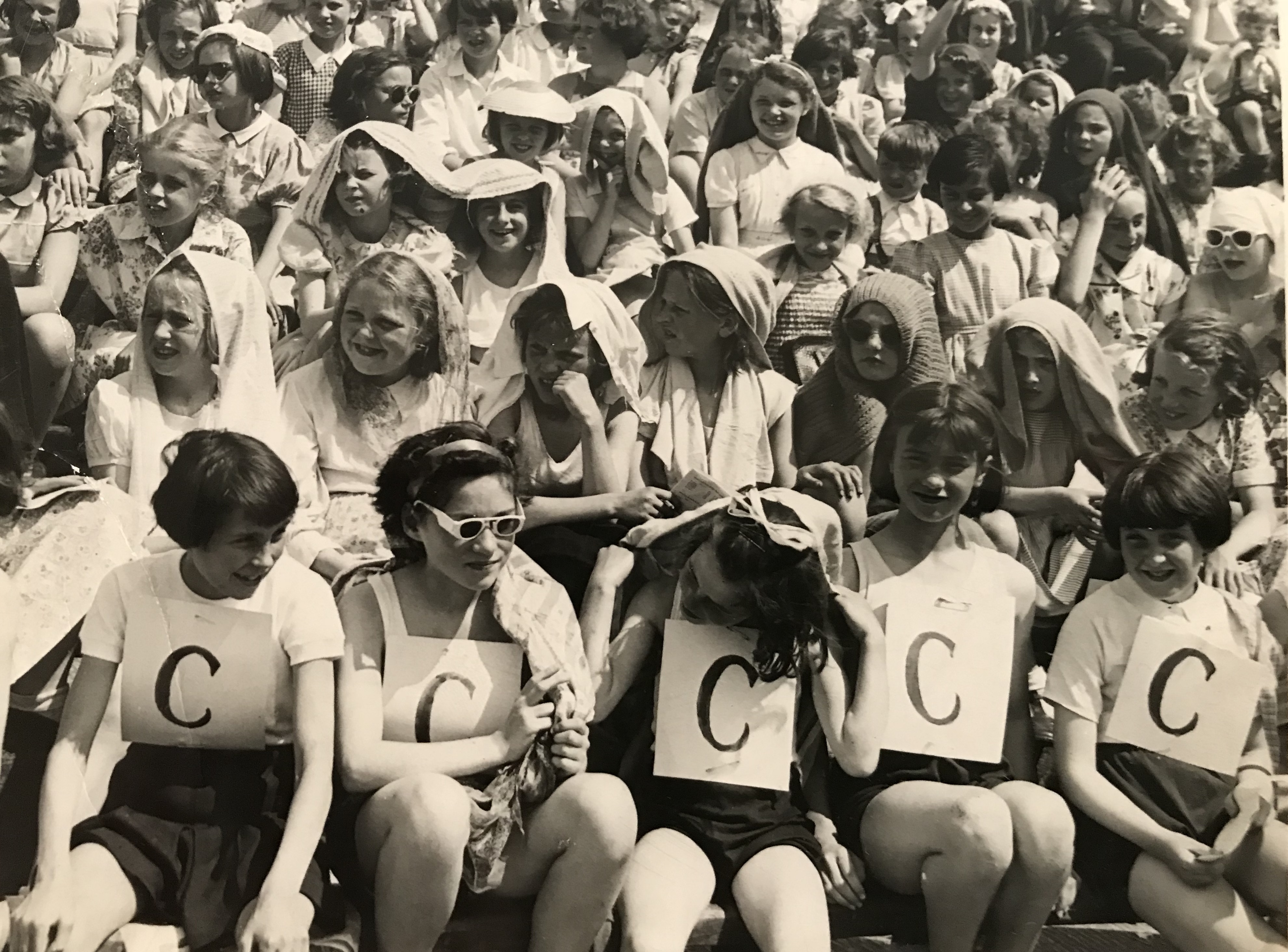 … and this is the back right. 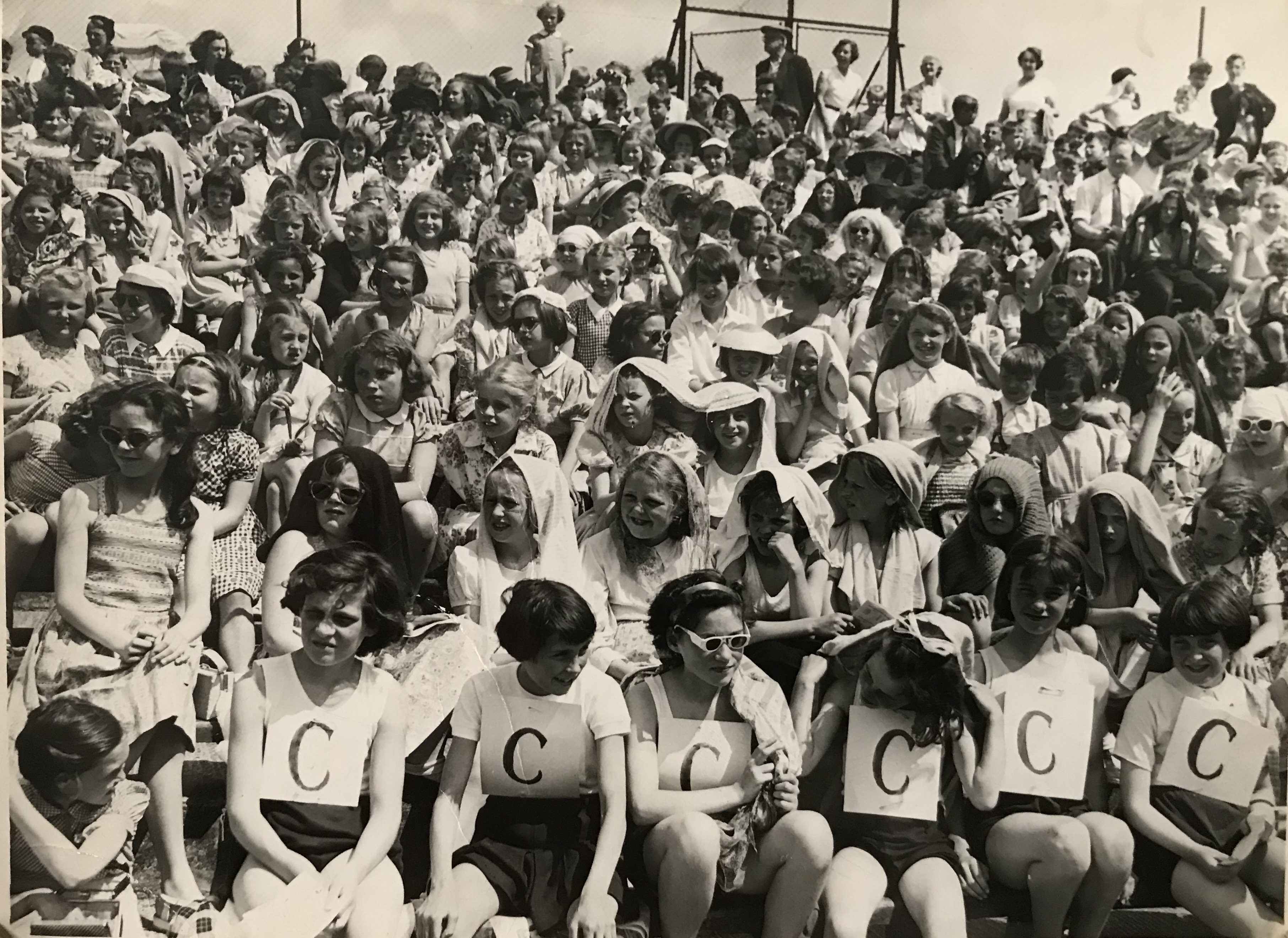 Ann Slater (nee Hopkins) has kindly contacted me to point out that the girl (third from the left) is Dorothy Johnson, sitting next to Diane Knight.

Andrew Knighton has kindly sent this photo, taken at Kensington School, perhaps in the mid 1930’s. Nellie Gormley is the female teacher on the right … and you have seen a more mature Nellie in the Chaucer Street class, above. (Day 2) 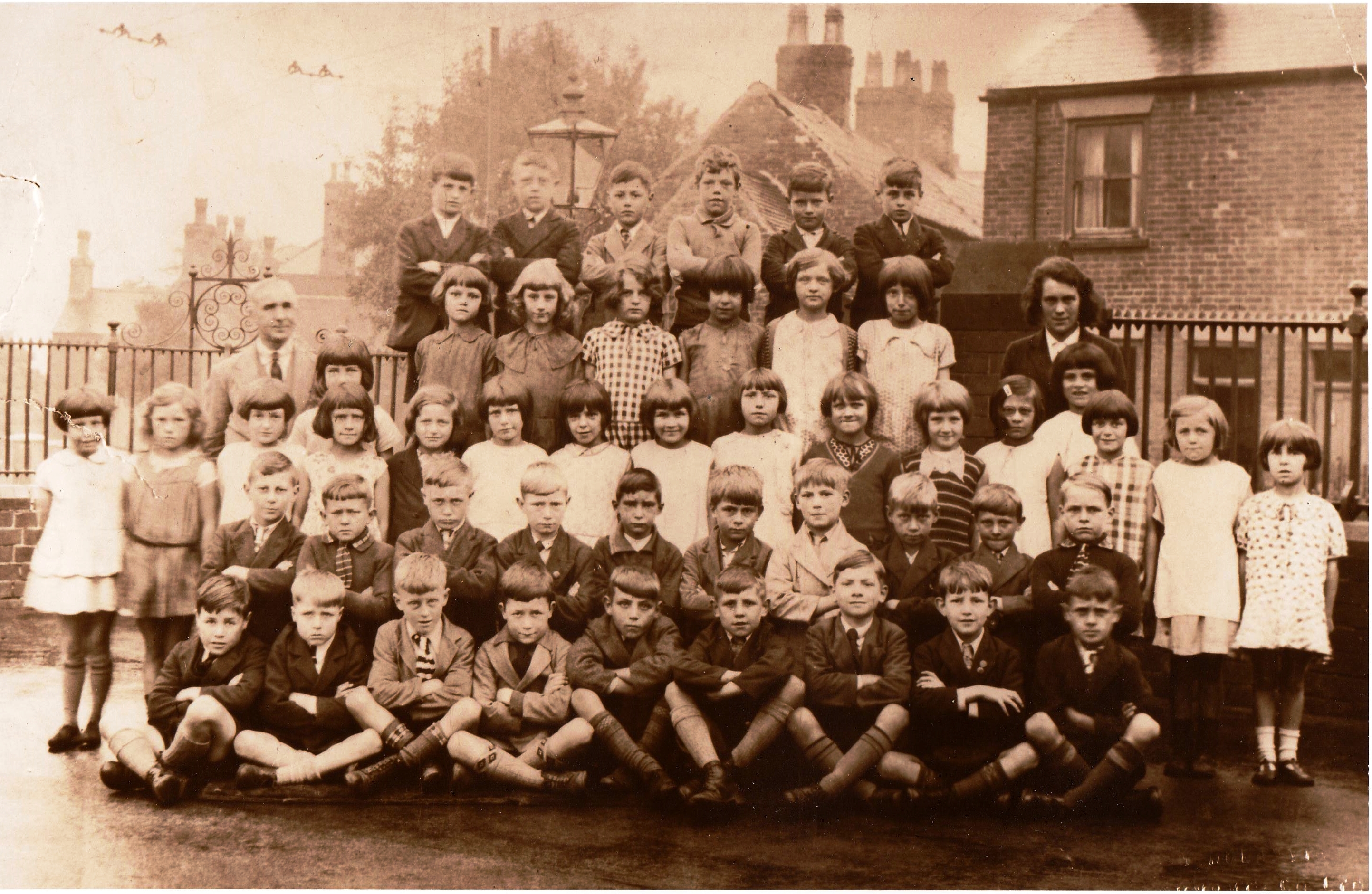 Andrew writes ….
I thought I’d send a school photo I have with my great aunt Nellie Gormley on it. I think it probably dates to the mid 1930s when she was a teacher at Kensington School. Behind her is Nottingham Road – the view is looking towards the corner of the playground on the corner of Nottingham Road/St. John’s Road; you can see the trolley bus wires in the background. On the left is the headmaster, Mr. S. P. Cox. I do have several other Kensington School group photos from the 1930s that were at one time in his personal possession as they have his name and address on the back. Interestingly one from 1937 has Mr. Stanley Jackson on it – he was still teaching there when I was a pupil in the early 1970s. You would never mess around if you were in his class and after breaks had finished, you could hear his slow deliberate walk along the red floor tiles in the corridor as he always had segs in his shoes and it gave plenty of warning for everyone to be back behind their desks and quiet by the time he walked through the door! 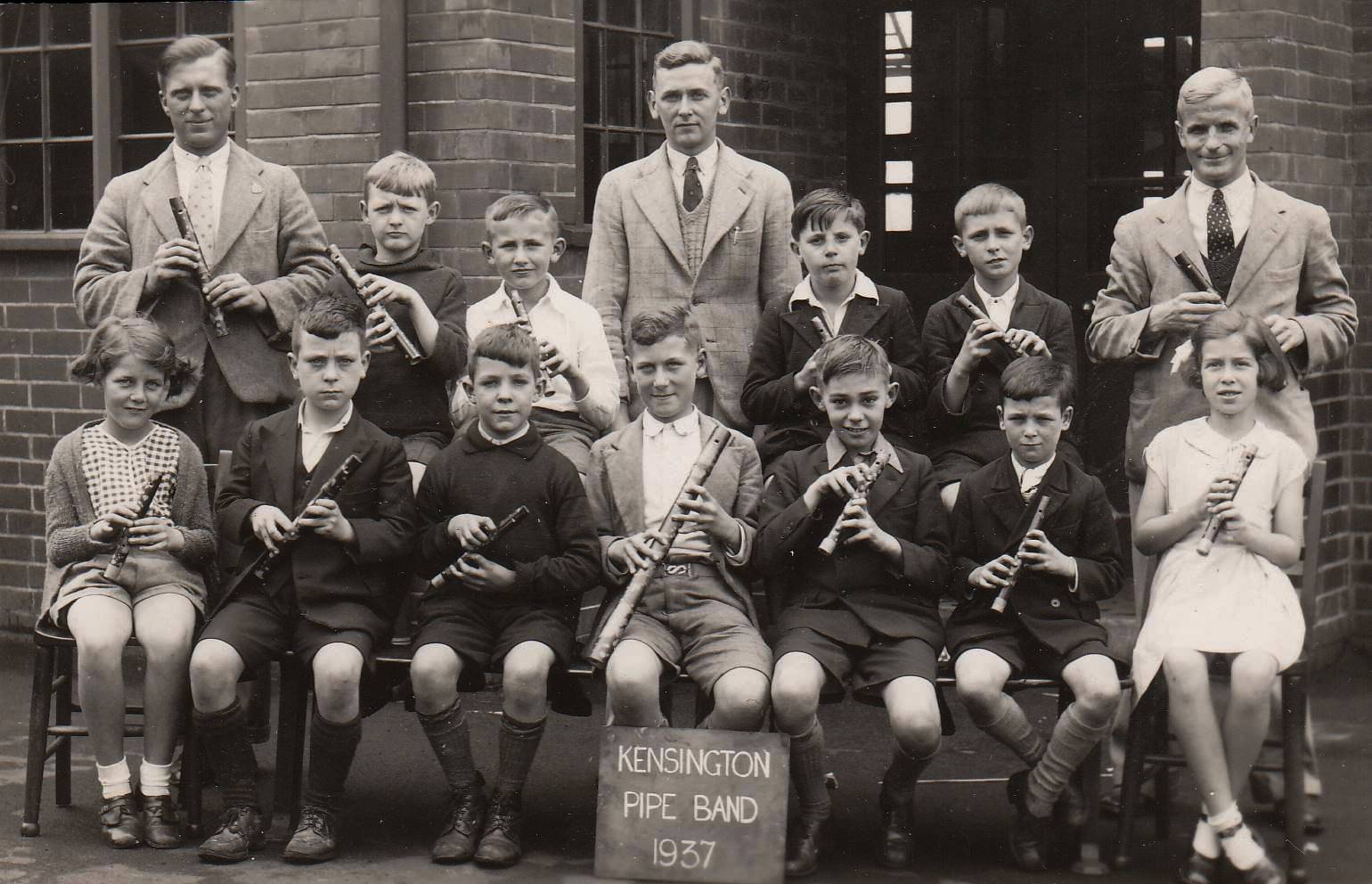 This is another one from Andrew. Stanley Jackson (whom he mentioned above) is at the centre of the back row. The teacher on the right is Mr. Bush.
Andrew writes … Although a young teacher on this photo, he would be very easily recognisable to anyone from my generation who attended Kensington School (I was there from 1969-73). I believe he retired not many years after I left there for Hallcroft.
The back of the photo has the message ‘Kensington Recorders 1937‘. 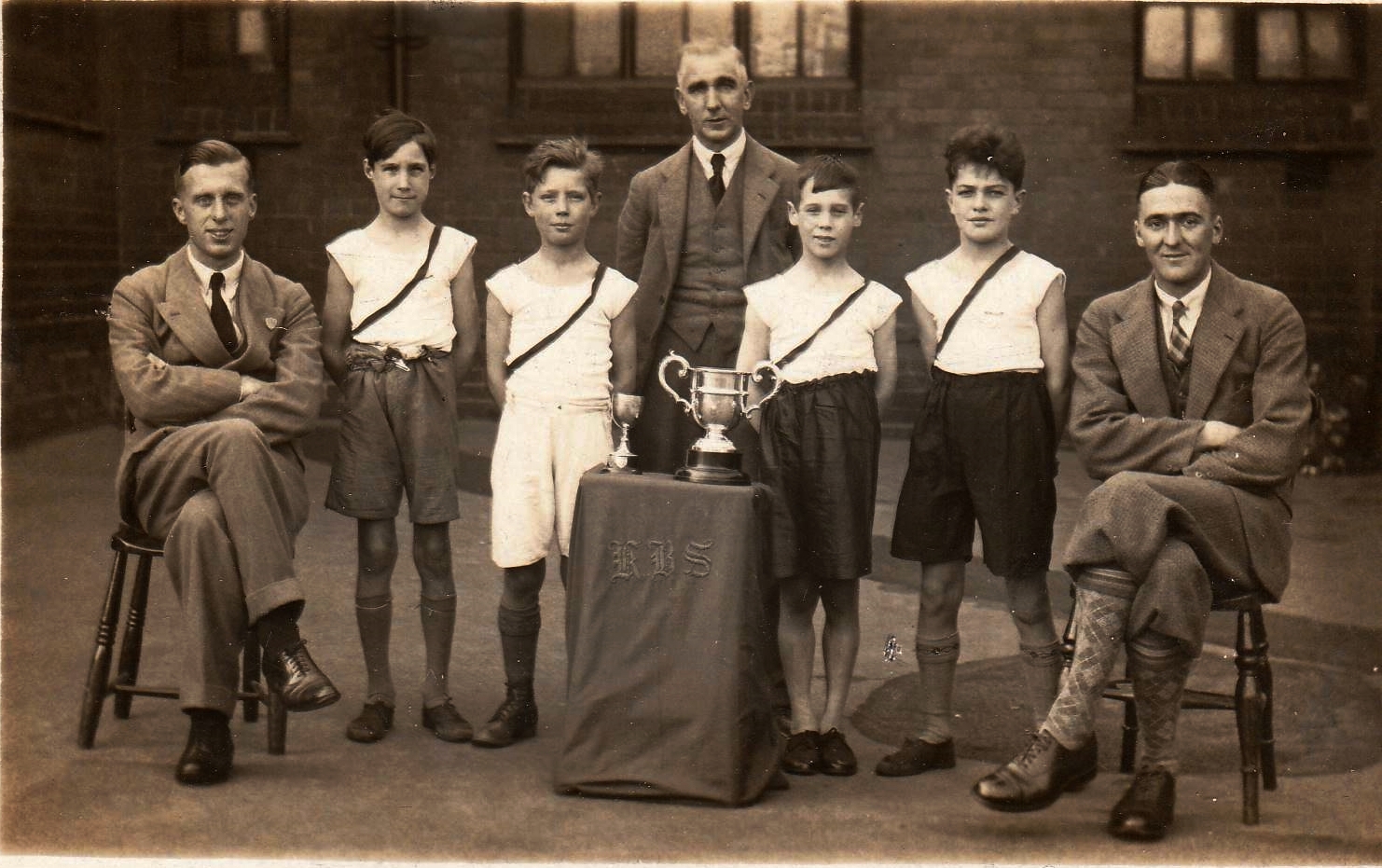 The photo above shows Kensington Relay Team 1931 (recorded on the back and signed there by W. Bush of 2 Field Rd, Ilkeston). Mr. S.P. Cox is at centre … recognise him from the above ?? 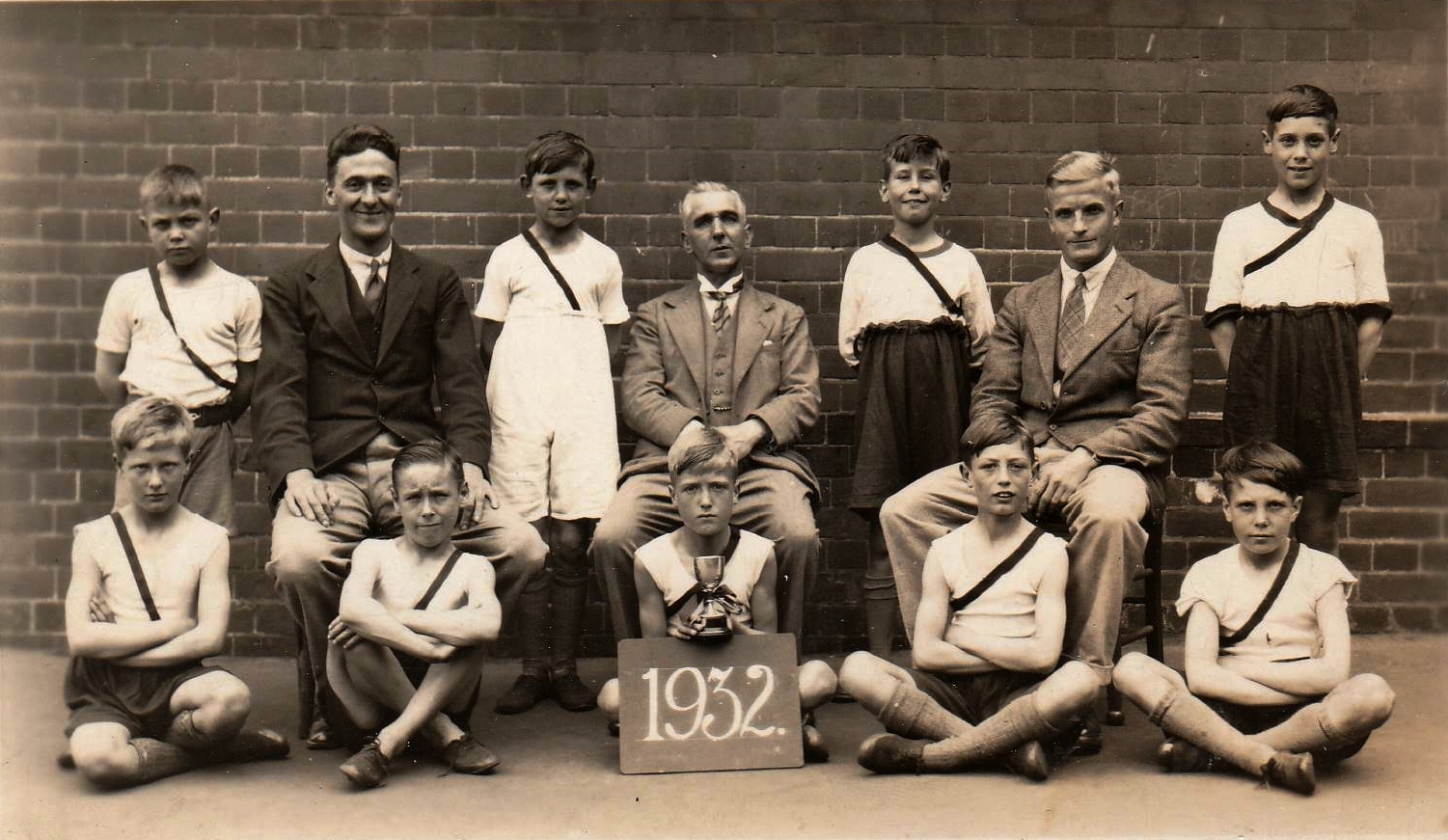 And this one is of the school’s Athletic Team 1932 (July, and again signed on the back by Mr. Bush). So, who is the adult in the centre ?? And who is the handsome chap on the right ??

All these Kensington School photos were kindly sent to the site by Andrew Knighton. 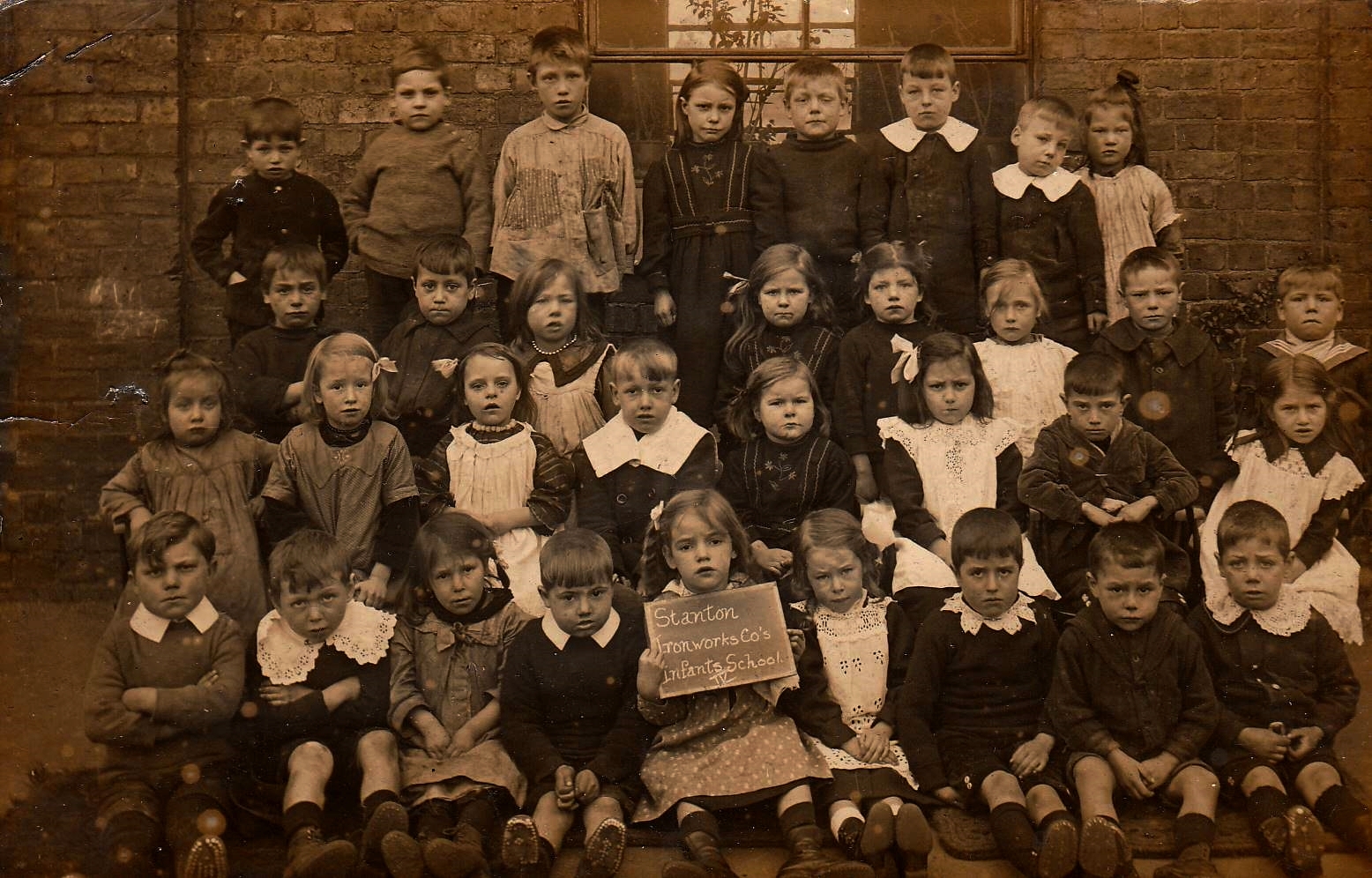 As you can see, this is a splendid class of young pupils at Stanton Ironworks Company’s Infants School … again, sent in by Andrew Knighton. He writes … none of them look happy and it wouldn’t surprise me if they had just been told off. He also points out that three of the girls are wearing the same style of dress … could they be sisters ? (i.e. the girl standing centre back, and the two girls seated, one behind the other, also in the centre).

The school is a bit of a mystery. The photo was taken about 1908 (?) but where was it ? There was a school on Hallam Fields Road, past St. Bartholemew’s called Hallam Fields School but it appears this was not the same building. Can anyone help ?

And, for a change, this from Andrew …..  an attendance record for a distant relative of mine when he was at Gladstone Infants School just after 1900 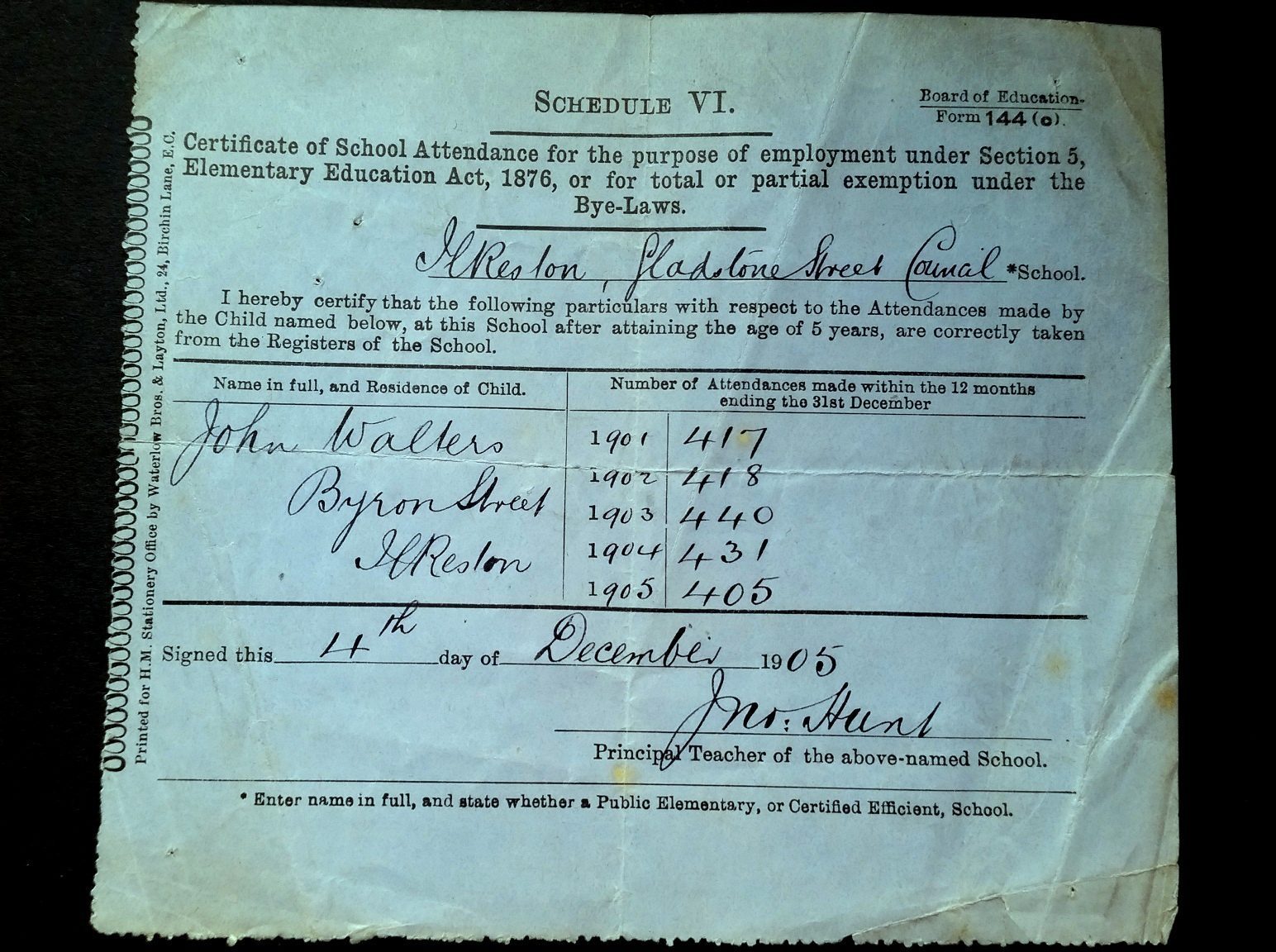 I believe John Walters was born about 1892, a son of Benjamin and Elizabeth Ann (nee Knighton). At the time of this report his parents were dead and he was living in Byron Street with his maternal grandparents.

Anite writes … I have recently acquired this photograph from another family member. It is of Gladstone street boys choir  1925.
My father Robert Henshaw (1912-1987)(son of Robert Henshaw and Mary Ann Bell/Straw/Henshaw) is in the 2nd row down, in front of the tall boy.
I am not sure of this but my father did tell me that his school master was also the person who collected the rent .