Ilkeston’s ASBO had failed in its primary aim but it had secured a majority for its represenatives on the new School Board.

One of the first tasks set by the Board was to assess any school accommodation needs of the town, which was therefore divided into four districts.

It was then calculated that about 500 additional school places were needed for the town but that the Cotmanhay area was most in need of extra provision. Thus a new school to accommodate 500 children was to be built in this district.

These first schools built by the Board were Granby Schools.

The original site for the schools, chosen in October 1878, was in Potter’s Old Engine Close belonging to the Duke of Rutland, described as being a field on the south side of Charlotte Street, about one acre in size, but by February 1879 it was clear that the Duke was unwilling to sell this land. Now the Board considered a ‘compulsory purchase‘ of the land as it was entitled to do, by the Land Clauses Consolidation Act. At the same time the name “Granby Schools” was chosen, to accomodate 300 boys and 300 girls in separate departments with a suitable adjacent teacher’s residence.
The Duke came back to offer two alternative sites — one in Horridge’s Brickyard-close was turned down but the one ( — eventually, after some discussion with the tenants of the land –) accepted by  Board was at the junction of Charlotte Street and Heanor Road.

In December 1879 plans for the buildings were chosen, designed by architect and surveyor James Tait of Friar Lane, Leicester, and in July 1880 it was decided that the schools were to be built by Frederick Shaw of the Manor House. Though they were not the first school opened by the Board.

By September 1880 the building of Granby Schools had not begun, held up by arguments over the valuation of property and the land on which the schools were to be built.
H.M. Inspector of Schools noted this ’serious delay’ in building the new schools and suggested that the Board should open an interim school immediately.
Such a temporary schoolroom for infants was opened in January 1881 in the Wesley Street Free Church schoolroom, Cotmanhay, its first mistress being Mary Elizabeth Pollard, daughter of Henry and Lucy (nee Brown), at a salary of £60 pa.
In March 1881 Lucy Moss, daughter of John and Mary (nee Scattergood), was appointed as pupil teacher/ assistant to Mary Elizabeth. Fees for the children attending this school were 2d per week.

The second election of the School Board was due in June 1881.
In the preceding month the Pioneer noted that….
“the Board … had worked so well and harmoniously together  that they should be re-elected without the expense of an election…. Education is nowadays a necessity, and that necessity entails a liberal outlay of money which cannot be avoided. Yet there is a vast difference between spending money on educating children for the battle of life and needlessly squandering it over expensive sites, ornamental buildings and exorbitant professional charges”.
One wonders what the newspaper’s attitude to the election would have been had the Churchmen not held a majority on the old Board?

The newspaper’s wishes were not granted.
An election was to be held and some of the candidates — but not all — took this far more seriously than William Mellor had done in 1878.
Several of them organised open-air meetings at various parts of the town. The four Dissenting nominees spoke at the junction of Awsworth Road and Cotmanhay Road, and later at Cotmanhay.
‘Churchmen’ William Adlington and John Moss declined to stand once more and thus there were only three Church candidates “all of whom made the best of their way individually, there being no attempt at combination”. (Old Resident). They were not organised, had no committee rooms and did not address the electors directly.
Edwin Trueman, although a Churchman, stood as an independent Working Man’s candidate and spoke at three meetings, starting in Cotmanhay, then at the end of Awsworth Road and finally in the Market Place. He advertised himself as a nominee of no party or clique, though like the other Church candidates he supported religious education which incorporated some discussion and comment — and unlike the Dissenters who wanted no comment or note – and also supported the survival of the voluntary schools.

For many therefore the result was not a surprise.
The four nonconformists were returned, thus reversing the strength of each party on the first Board.
For those of you who want the names ….
the new members were Rev. John Harry Buchanan** (Holy Trinity Church); Rev. John Fleming (Independent Chapel); Stephen Keeling (Primitive Methodist member); Samuel Streets Potter (C of E); Joseph Belfield Shorthose (C of E); Herbert Tatham (Free Methodist); Charles Woolliscroft (Wesleyan Methodist).
Edwin Trueman narrowly failed in his bid to be selected. Some argued that his supporters were too confident and had split their votes in favour of the other candidates. Edwin put the blame on Samuel Trueman who also had stood in the election and who had attracted a measly 81 voters some of whom thought that they were voting for Edwin.
“This was a party dodge which had the desired effect, and was afterwards boasted of by its perpetrator”.

** Some time later the Pioneer commented upon the newly-arrived Rev Buchanan .. “a new star which had appeared in the local firmament .. and who had come to the town to take charge of the Mission district, later the Parish of Holy Trinity. He had been rousing the ire of a good many Ilkeston worthies, both Churchmen and Nonconformists by his rather advanced ideas on certain matters, and who intimated his intention of having a finger in the local Eduational Pie.”

Now with a different political and religious complexion the new School Board tried to alter the Granby School plans of the previous administration, by adding an infants department to the original plans, which were for boys and girls only.
This would necessitate a change in the original agreement for the purchase of the land from the Duke of Rutland … and the Duke’s agent Robert Nesfield was having none of it!  He would not allow the Duke to be dragged into local political arguments and so had to decline the School Board’s request.
Negotiations dragged on but in February 1882 the contract for building the new Granby Schools was agreed and signed off between the Local Board and Frederick Shaw, its builder. The projected date of opening was the end of September. … a date which came and went !!

Meanwhile, on November 2nd 1882 it was decided to advertise for a Master at £150 pa and a Mistress at £80 pa, as well as two pupil teachers for each department. There were 131 applications for the post of master and nine for the post of mistress. (Read into that what you will).

The Granby schools were finally opened for business during the second week of January 1883, though formal opening was delayed until April of that year by which time there were 470 children ‘on the books’.
“So Granby Schools  entered upon their career of usefulness without any ceremony or formality, without any blowing of trumpets or making of speeches, but quietly and businesslike, setting out as it intended .. ” (IP Jan 20th 1933)
They were built to accommodate 578 boys and girls but no infants.
As Chairman of the School Board Charles Woolliscroft said at the opening ceremony, the schools were ‘substantial and neat’ and the Board had been careful to ensure that there was no expenditure on ‘unnecessary ornamentation’.
“Neat and attractive” agreed the (Liberal) Advertiser, “making no pretensions to the ornateness of style affected by some School Boards”.

It went on to describe the schools’ interior.
“… the main room being in both schools of the shape of the letter T
“A wing on one side of the boys’ school contains two class-rooms, which can at the option of the teacher be thrown into one large room.
“Glass panels in the doors communicating with the class-rooms subject them both to the inspection of the headmaster in the main room.
“In the girls’ school the class-rooms are arranged at one end, instead of along the side. The other details are precisely similar to those in the boys’ school.
“Each school is capable of accommodating some 280 pupils, and the class-rooms are calculated to hold about 70”.

George Barratt Hargreaves, the first Head, came as a well-qualified ‘educationalist’ — with ten years experience as a certificated teacher, the last three years serving as senior assistant master in a large Board School in London. Miss E.M.Brant was the Mistress of the Girls’ School.

The Boys’ school was built to accommodate 281 children but by 1884 its average attendance was 305. Mr. Hargreaves was compelled to turn potential students away !!

In 1884 Edwin Trueman was at last successful in his efforts to be elected as a member of the School Board.
And it was he who in August 1884 put forward the following motion to the School Board.
“That the resolution of the Board having reference to the reading of the Bible in Board Schools, passed on the 31st of January 1883, be rescinded; and that it be an instruction to the head teachers of the Board schools that at the proper time set aside for the purpose the children sing a hymn, and repeat after the teachers the Lord’s Prayer. The children shall also read a chapter in the Bible, the teachers to accompany the same by such explanation and comment as may to them appear necessary or desirable, but they must carefully avoid in such comment any reference of a distinctly denominational character. Further, that once, at least, in every week the children be taught to recite the Ten Commandments, and the teachers be required to explain the meaning of the same”.

By this motion Edwin was seeking to provide a more complete education for the children by including an ‘education of the conscience’ and an ‘inculcation of the moral law’ to avoid ‘a collapse in the social fabric’.

And yet another member of the Board, the Rev. John Fleming of the Congregational Chapel, moved as a rider,
“That no comment, ethical or theological, be permitted on the reading of the Scriptures or the Ten Commandments”.
He felt that no teacher could discuss or explain the Scriptures without giving his or her own particular denominational views.

After a flurry of voting the original motion was the one adopted by the Board.
Wouldn’t you just know it?!!

In January 1885 the Derby Daily Telegraph reported that there were 5000 children between the ages of five and 14 years but school accommodation for only 4000. Additional schools were in the process of being erected at Kensington.

And what of the rest? 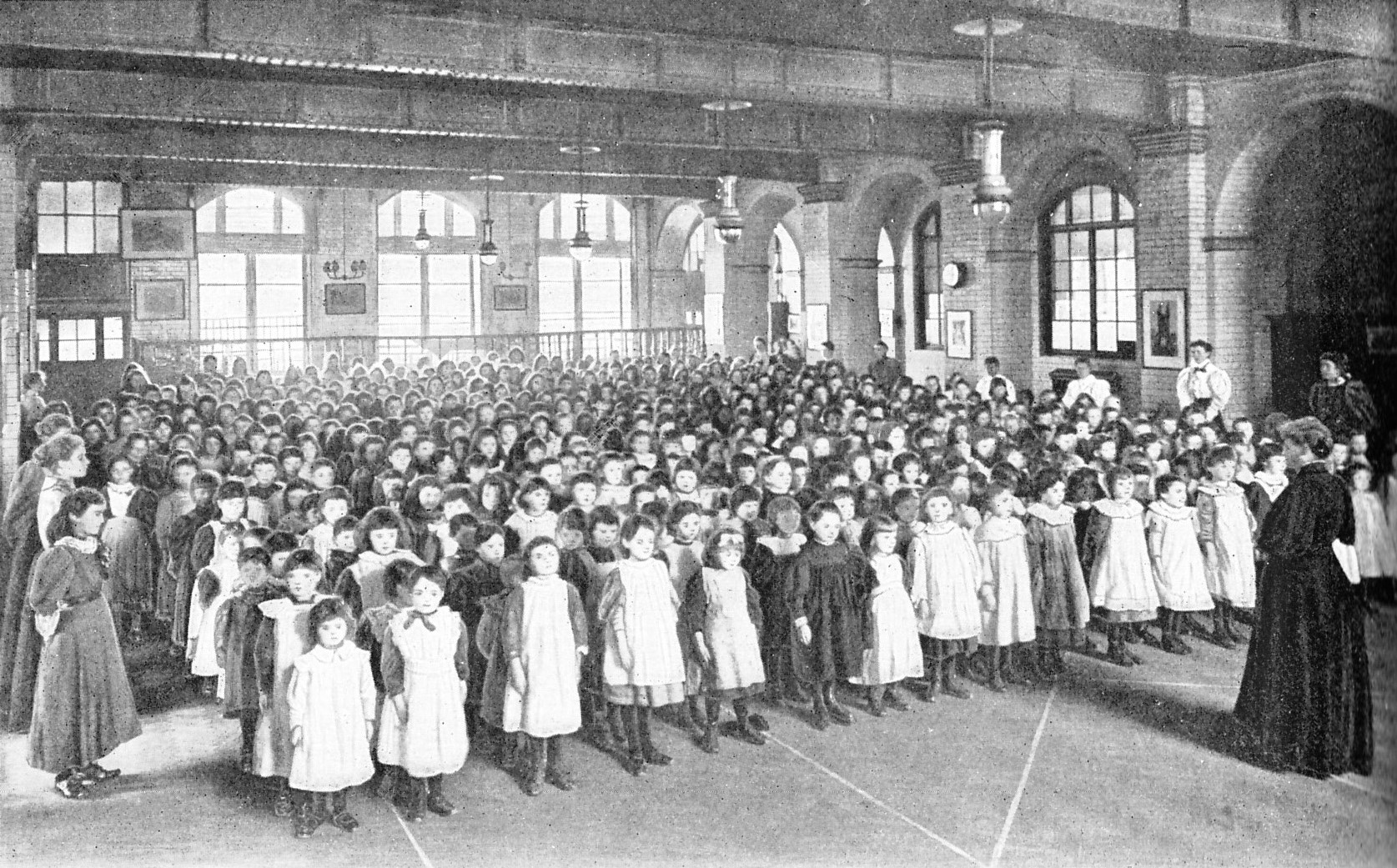 As a post-script, Andrew Knighton has a couple of very interesting items. He writes ….

The two items are school leaving certificates for Fred Knighton (my great grandfather) and his brother, Harry Knighton. They both attended the British School on Bath Street, which used to stand opposite Albion Place, later the site of the Globe Picture House/billiard hall and latterly before demolition, John Collier’s and Gunn’s card shop. There is a distant view, showing the steps up into the school room in the view of the top end of Bath Street, looking down, in Cox and Mason’s Views of Ilkeston, published c.1900. 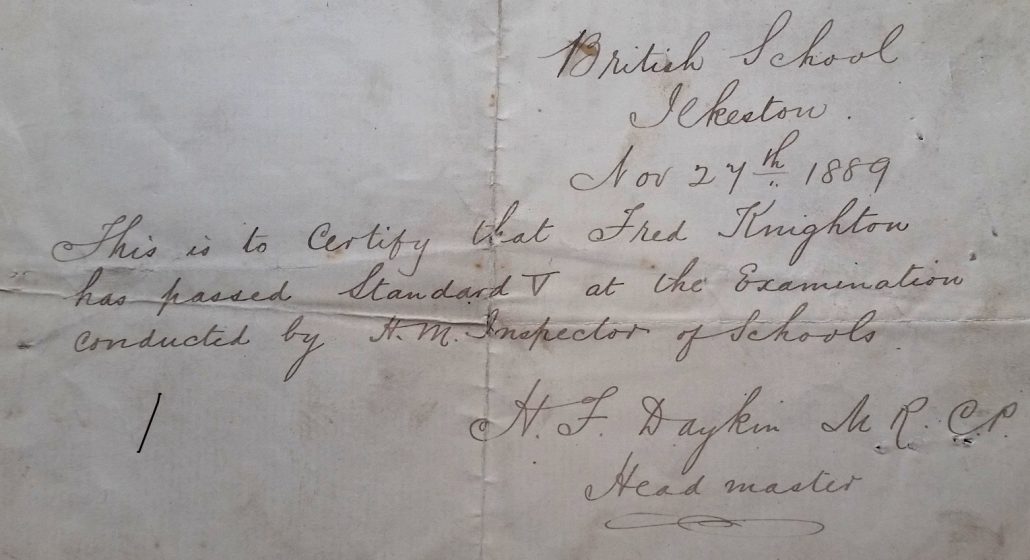 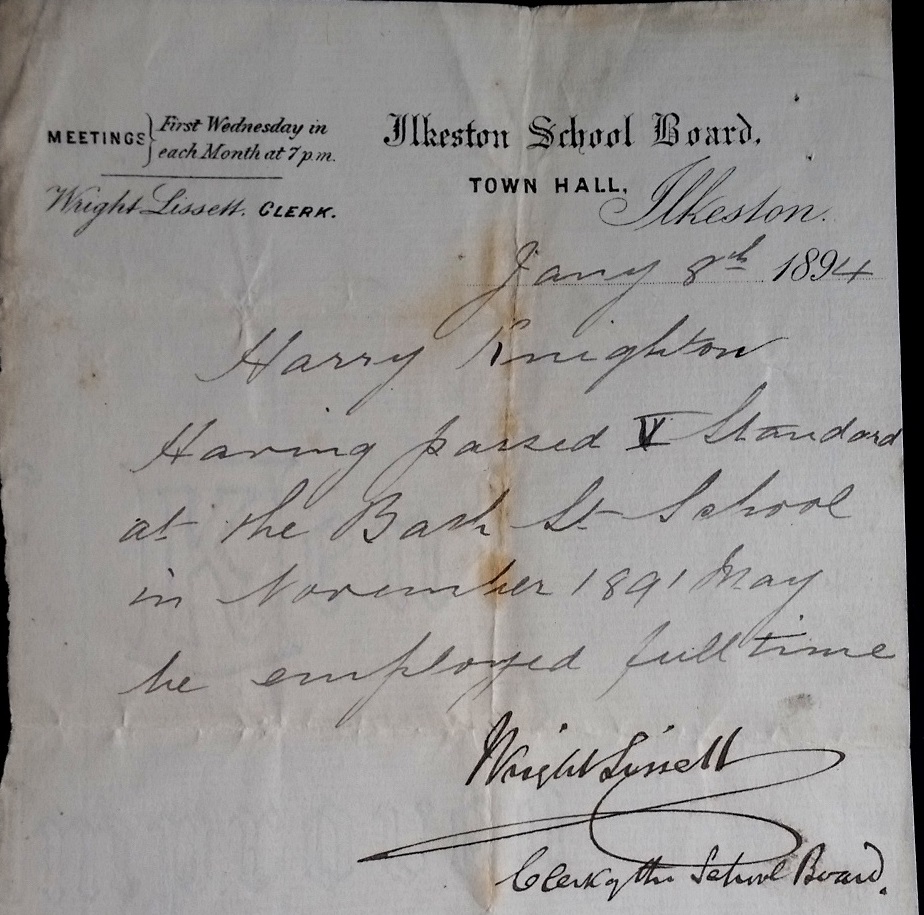