After Bostock’s Yard but ….

…. Before Isaac Gregory’s, Riley’s, and Scales & Salter’s shops was Matthew Baker’s double-fronted whitewashed house, which stood on the bank, away from the street.
Mathew was a warp-hand at Carrier’s. He had two daughters, Mary Anna, and Amy, also one son.

Adeline seems to be recalling James Baker, the father of Matthew Baker and both of them lacemakers.

For a time in the 1870’s James and his family lived at this house in Bath Street, after a period in Mount Street and Chapel Street, and before moving to Albert Street. James was the husband of Mary (nee Shaw), marrying on September 5th, 1836 and having at least nine children, six boys and three girls.

The children of James and Mary Baker

— Eldest child William was a lacemaker when on April 2nd, 1861 he married Hannah, daughter of needlemaker William and Elizabeth Fox, and whose family lived at Weaver Row. They lived their married life in the Weaver Row/Gladstone Street area.

— James junior, also a lace worker, married Elizabeth, the illegitimate daughter of Elizabeth Turton and miner John Winfield, on October 19th, 1863. A year earlier Elizabeth had herself given birth to an illegitimate daughter, Mary, who assumed the surname Baker after the marriage of her mother. James lived the rest of the century never moving far from the Chapel Street/ Chaucer Street area. Elizabeth was the sister of Enoch Turton whom we met earlier in Flinders’ Row.

— Moses died in an accident when working as an ironstone getter in December 1854 – he was aged 12.

— Matthew married Martha Wardle in 1868 and then went to work in Nottingham as a lacemaker.

— Aaron, lacemaker, married Sarah Hawley in 1873. She had a home at 7 Burr Lane, was the daughter of labourer William and Elizabeth (nee Greasby), and had given birth to two illegitimate children. The surviving child, Matthew, took his mother’s maiden name while living with his maternal grandparents before adopting the Baker surname when he eventually went to live with his mother and step-father.

— Mary Hannah was born in 1849 and married Sandiacre-born coalminer John Pritchett on September 11th, 1870. She had spent her childhood in Chapel Street and at the end of the century she was back there, at number 140, where she had lived for nearly 20 years.

— Lacemaker son Arthur left Ilkeston in the 1870’s to work in the Yorkshire coal industry.

— The youngest of the family was Amy, born in 1855, who gave birth to her illegitimate son Edward in 1879 before marrying coalminer Edward Ellis in 1881.

Almost until his death, aged 66, in January 1882 James Baker senior was a member of Ilkeston Brass Band and had been connected with it for almost 40 years.
On a tempestuous and rainy Sunday afternoon he was buried at St. Mary’s Church and at the end of the ceremony the band played his favourite tune ‘Heavenly Fountain’. There was an estimated crowd of over 1000 at the burial.

Their home was demolished in the mid-1880s, along with Bostock’s Row. On the site was built a branch of Samuel Smith & Co. Bank, the bank responsible for the financial accounts of Ilkeston Local Board. This was number 42 Bath Street (Kelly’s Directory 1891) 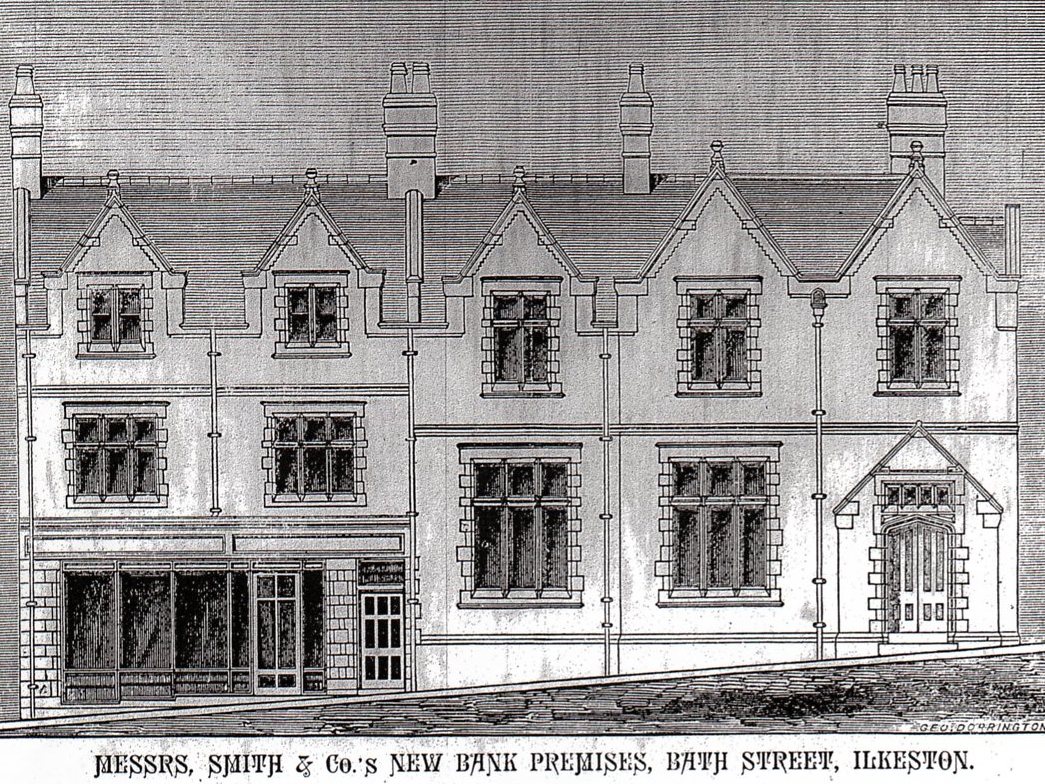 James White asked in March 2015…
I’m fascinated by the old drawing of “Messrs Smith & Co’s new Bank Premises” that appears at the bottom of your page on the Baker household. The bank has been demolished but the adjoining shop (44 Bath Street) survives.
The bank is not on the OS 1880 map, but it is on the 1900 map. What was the source of the drawing? Do you have a date, an architect, a building contractor?

The reply …
The 1879/1880 map to which you refer shows Smith’s Bank as part of and fronting the Town Hall in Ilkeston Market Place.
Both Kelly’s Directory of 1881 and Wright’s Directory of 1883 refer to the bank of Samuel Smith & Co in the Market Place.
However the plans for the new bank were discussed by the Local Board in 1881 and approved by that body in August of that year. The minutes of the Local Board meetings are held in the archives at Erewash Museum and so you should find reference to the building of the bank in them.
Certainly the premises were built by 1885… I have seen reference to the ‘Bath Street’ bank at that time. (C.N. Wright’s Directory 1885)
The picture which appears on the Baker Family page of my site was taken from the Ilkeston Advertiser.
In December of 1881 that paper produced an ‘end-of-year’ supplement and the picture appeared there. Most likely it would have been taken from an architect’s plan.
The same paper mentions that the bank was to have a frontage of 76 feet and a depth of 50 feet, and a height of 38 feet to the ridge.
It was to include, as well as the bank, a manager’s house, a shop and a dwelling house.
The architect was to be Messrs Evans and Jolly of Nottingham. The plan was to have it opened by ‘early 1882′.. though I don’t know the builders at the moment. Perhaps they were local .. the Warners perhaps?
So the building of the bank would have been completed some time between January 1882 and May 1883. I’m sorry I can’t be more precise at the moment.
There will no doubt be reference to it in the local press — the Advertiser or the Pioneer — between those two date parameters.

James then added..
I’ve done some research of my own. The shop was a furniture shop from at least 1954 (at which time a new shop front was proposed by Jays Furnishing Co). In 1970 A large two-storey extension was built by Great Universal Stores, trading as Cavendish Woodhouse. The present shop front was installed in 1992, at which time the shop was converted for use as an amusement arcade.
Smith’s Bank, later the National Westminster Bank, was demolished and replaced in 1974.