In 1857 Ilkeston streets were lighted by gas, but houses and shops were still lighted by candles (many by courtesy of Moses Mason)

Plans for the gas works at Ilkeston were drawn up at the beginning of 1846 and tenders for their erection were first sought in the spring of that year. Building of the works in Rutland Street seems to have begun at the end of 1846; a letter in the Derby Mercury of December of that year laments the fact that on Sunday of all days men can be heard labouring at the gas works “which are now in erection (at) Ilkestone”.

The Ilkeston Gas-Light and Coke Company was formed in 1846
In 1847 the company issued 400 shares of £5 each but this proved insufficient and further capital of £500 was raised in 1848.
The Nottingham Review of September 1848 reported the second Ordinary General Meeting of the company’s shareholders at “the house of Mr. Bennett in East Street”  — that is the Wine Vaults of William Bennett. George Blake Norman was in the chair and Matthew Hobson and ‘Mr Carrier’ were re-elected as directors.

When the Ilkeston Gas Provisional Order Bill came before a Select Committee of the House of Lords in 1877 it was stated that the Ilkeston Gaslight and Coke Company was established by deed of settlement in 1848, but without any Parliamentary sanction, as was the case with hundreds of gas companies throughout the country. This basically meant that it was unregulated, as to price, quality of gas, amount of share dividend, the keeping and annual publication of accounts, and other matters.

In 1853 the Pioneer reported that “it appears that most of the difficulties which have hitherto impeded the success of the company have been surmounted, and that, for the first time in its history, it is enabled to realise something like a respectable dividend, viz., 7s on each £6 5s share”.

The same directory also informs us that “the present gasholder will contain 12,000 cubic feet of gas, but is too small for the consumption; it is therefore intended to put up another to hold about 14,000 cubic feet, and otherwise enlarge and improve the premises at an out lay of £500”.

The first gasworks were situated on the south side of Rutland Street and separated from Bath Street by other industrial premises while the new larger gasworks were further down and on the opposite side of the same street, between Bloomsgrove Road and Belfield Street. At this time Bartholomew Wilson was the Company Secretary. 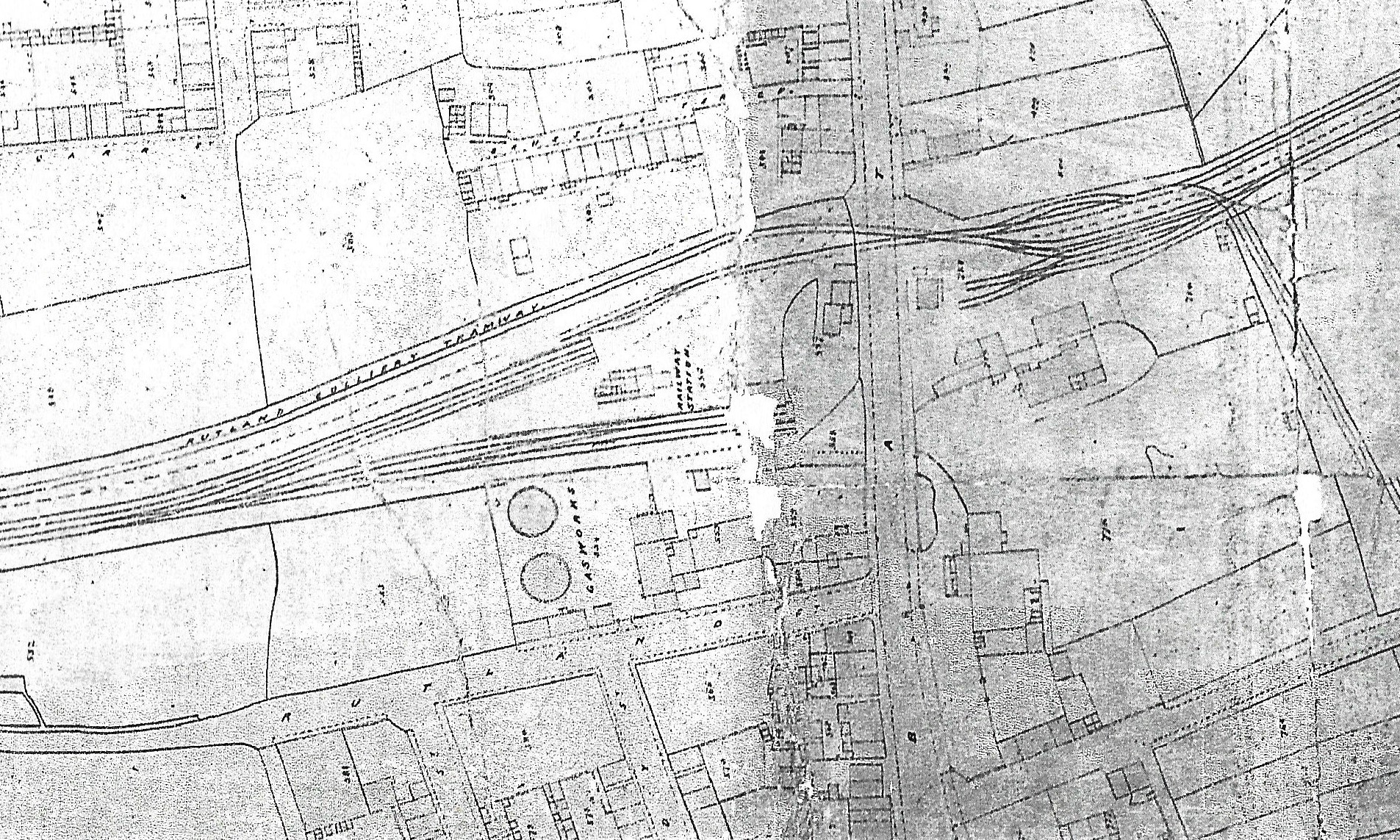 The map, above, is taken from the Local Board map of 1866. You will see that serious damage to the original, down its centre, has marred its clarity. As the mapmaker marked his features in a ‘contrary’ direction, I have reversed the map to show the south at the top.

Hopefully you will identify the two circular gas-holders in Rutland Street, and just above them, right, is named the Railway Station. Also named are Brussels Terrace, Carr St., and Bath Street (partially)

We must now introduce the Local Board and examine what it was, what role it played in the development of gas provision in Ilkeston, and what part it played in other aspects of town life. In the process we will be introduced to several prominent Ilkeston personalities many of whom we shall meet again as we continue our walk.